So much to say, so little time! First off, I thought I’d let the folks who get WPR daytime know that I’ll be a guest on Larry Meiller’s show tomorrow at 11:45. It’ll be a hoot to see him. I’m feeling sort of smiley-silly about it, so watch out what you ask me if you call in!

Second, here’s a photo of Lassie with her canine chiropractor, Dr. Mark McCaan (spelling?). We go in every month (Willie every other), and there is simply no question that it helps her 15 year old body (almost, she’ll be 15 in 3 weeks!). The effects are immediate and obvious. If I skip them she develops a significant limp originating in her right shoulder. If I stay on schedule she still clearly has some arthritis (treated in many ways, not just chiropractic). [Did I mention, that in spite of Dr. Mark’s kindness and care with her old body, Lassie is never thrilled about going to the vet clinic? Look at the faces below… talk about absolute opposites of emotional expressions! Lest you are worried about my Lassie girl, she looks exactly like that in the car too… no one does ‘disdain’ better than Princess Lassie! 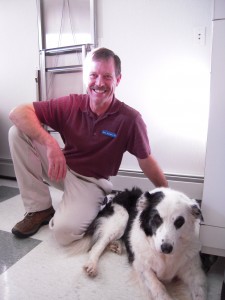 I was talking to a dear brother-in-law on my way there, and had the conversation you well might have had too…”Yes, really, there really are canine chiropractors and yes, really they can do amazingly wonderful things for a dog’s body, just as is true in human medicine.” (And what wasn’t said was “Yes, really, I know she’s a dog but she’s my dog and I love her like family and I am lucky enough to be able to afford it and look at all the money that people spend on golf clubs and fancy shoes so why the heck shouldn’t I spend the money on my dog!) My brother-in-law is a dear, understanding man, so I don’t think he was being judgmental as much as he was being surprised.) But it seems so common to hear from journalists whose editors want them to write a “CAN YOU BELIEVE HOW MUCH PEOPLE SPEND ON THEIR DOG!” story. Well, yes, some of us do, because we are lucky and can afford it. Is that really so strange or terrible? I wrote in For the Love of a Dog that one interviewer wore $400 shoes while asking me, incredulously, if people really paid money to have acupuncture done on their dogs. I was very polite when I answered, honest.

It’s winter at the farm.. we just got the barn shoveled and scrapped and brushed and bleached in time. Snowed a little last night, 14 degrees on the kitchen thermometer this morning. I am NOT ready. Apparently, Willie is: 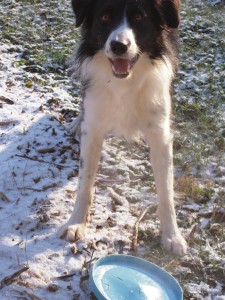 Next post will be about great research that’s piling up on my desk… all done on species other than dogs, all relates to us and our dogs directly!

« Tales of Two Species, Essays on People and Dogs
Are Males and Females different to train? »