Welcome to an ongoing inquiry about the behavior of people and dogs.
Blog Home >> Animals and the People Who Love Them >> Case Study – Dog/Dog Reactivity – Ceilidh

I did a seminar last week in Pittsburgh for the Westmoreland County Obedience Training Club, and worked with 3 dogs who had “dog-dog reactivity” problems. In choosing those dogs I had a problem myself: I had to choose from over 12 people who offered their dogs for demo’s. Right now I’m working on choosing dogs for a similar seminar in DENVER next weekend and have the same problem: too many dogs, too little time.

And so I thought it might be useful to use one of Pittsburgh’s dogs as a case study in the blog, and her owner, Jan, graciously agreed. I should say here that I don’t have the depth of information I would if they were my clients, but here are the basics:

Ceilidh (pronounced Cay-lee) is a 6.5 year old female Border Collie who fixates on other dogs with what I call the “locked and loaded” look of a stalking predator. She does not bark or vocalize in any way, just does her “silent runner” routine when she sees dogs she doesn’t know. She does NOT do this to unfamiliar BCs, only to other breeds. This is not her version of playing or herding, if they get too close she will lunge toward them aggressively.

Ceilidh can be pushy and demanding around the other dogs at home, (we agreed she’s the type of dog who reminds us why the term “bitch” is a dirty word), but is soft and sugar-sweet to people. Without knowing her better, I’d describe her as both frightened of other dogs and desperately desiring to control them. I call dogs like this “alphawannabees.”  To add to the story, Jan told me at the seminar, Ceilidh has suffered from seizures all her life. Jan told me after we worked on stage that she was aware they’ve let Ceilidh “get away” with a lot because of her seizures. Jan has very realistic goals for Ceilidh; she’d just like to be able to walk her down the street or go to the vet clinic without it being a stress test for her.

I had chosen Ceilidh as the dog I would use to illustrate using an “on-cue” positive reinforcement for dogs who are dog-dog reactive. In my dog-dog reactive seminars I summarize and illustrate the four most commonly used methods that I believe are effective and humane: 1) Teaching “Watch” or “Look at Me,” 2) Teaching “Where’s the Dog?” or “Look at That” (Leslie McDevitt), 3) BAT or Behavior Adjustment Training (Griesha Stewart) and “Abandonment Training” (Trish King). Ironically, although #1 and #2 seem to be opposites, functionally they tend to get the same behavioral response: see dog, look at owner, get treat. However, in my experience, which one you choose  depends a lot on the dog. I often suggest using them both, as I did with Willie, but you have to decide which one to use first.

So, which methods to use with Ceilidh? First off, I wasn’t inclined to teach her “Where’s the Dog” or LAT, because in typical Border collie fashion, once she’d locked onto a dog she had a hard time looking away. I like to use “Where’s the Dog” with dogs who are truly afraid of just the sight of other dogs, and who either initially bark and lunge, or avoid looking altogether. Ceilidh did not need any encouragement to look at other dogs, (she says, making a profound understatement) and once locked on was stuck in typical BC fashion, barely able turn her own head away. For the same reason I wouldn’t start with BAT, in which you bring the dog to the beginning of threshold and then wait for them to offer some behavior that is a sign of relaxation — a head turn? looking down, opening their mouth?  It’s a great method and we used it with the next dog to great advantage, but we could have waited for an hour for Ceidilh to turn her head away to no avail, so we didn’t want to start with that.

We worked on “Look” (at her person, I often use the word “Watch”), which she’d already been taught but wouldn’t do if she saw another dog. First we reinforced Look with great treats with no dogs around and she did very well. Then a mellow greyhound entered the room, & Ceilidh predictably locked on and froze. When I asked for a Look she didn’t twitch an ear. I put the treat to her nose and OH! that got her attention and I lured her head around, then gave her the treat. We worked for about 10 minutes on this on stage with variable success. She did begin turning her head when I said Look! after looking at another dog, and showed some good improvement, but neither was it one of those AMAZING!!! moments in which a dog turns around on stage within a few minutes (that was the next dog who I’ll talk about in the next case study!). I liked enough of what I saw to advise this:

1) Ceidilh needs lots and lots more “foundation” training on Look before using it successfully around unfamiliar dogs. I suggested that Jan spend a solid month working on Look during distractions of increasing intensity. Eeeps, that seems like a lot, but C had been fixating on dogs for years, and combined with a somewhat, uh, ‘set-in-her-ways’ nature and her  BC propensity to stare, this is just not a ‘quick fix’ dog. She needs to master this signal in other contexts first before we use it on dogs. Once she does use it with dogs, start with the dogs a long way away (farther than we could manage at the seminar).

2) “Look” should also include backing away from the other dog, something I realized I began doing unconsciously when working with dogs like Ceilidh. So not only does she get a food reinforcement for looking away from the other dog, she gets to increase the distance between them, which is one of the things she wants. It’s easy, say Look or Watch and as she turns her head toward you just back up a step and then release the treat when she’s moved toward you a step or two.

4) Once she has another behavior in her repertoire  beside a fixated stare, I’d love to give her the chance to offer a different behavior, mark it with a clicker, run AWAY from the other dog about 10-15 feet and then give her a treat (she’s not very toy motivated, otherwise I might suggest a toy). This is basically the first steps of BAT, and once you get further with her it should be a very useful addition to the tool box.

5) Gradually she should be allowed closer and closer, always working her just sub-threshold, trying to keep her able to offer another behavior that you could reinforce by moving away. If she goes over threshold and begins to fixate, I’d try a Look immediately and reinforce even a head turn toward you. If she gets stuck, I’d do an EMERGENCY U-TURN (described in Feisty Fido, as are AutoWatch and Where’s the Dog?) and get her out of it. Then try asking for the appropriate behavior when you are further away.

6) One important addition to her treatment plan relates to her home environment. It turns out there are neighbor dogs who drive her batty, and if she goes out in the backyard and they are out they bark like crazy at her and she, not surprisingly,  becomes reactive back. Hard as it is, it’s going to be almost impossible to turn her behavior around on walks or at dog shows if this doesn’t get handled, granted that’s not easy to do. But management and prevention are going to be the name of the game here.

My guess is that it’s going to take some serious work for a good six months before she gets herself turned around, and I doubt I’d ever take her to a dog park, but I think that she can be much, much more comfortable around other dogs and much, much more fun to take out and about.

She’s such a lovely dog in so many ways, the kind the goes all gooey and smushy when you meet her, and I wish her and her mom all the luck in the world. I’d sure she’d love some encouragement from those of you who, like me, have had reactive dogs who showed huge improvement after using some of these methods.

MEANWHILE,  back on the farm: Willie is starting month 3 of re-hab, yeah! His shoulder has had some ups and downs,  but they are to be expected and he’s doing well this week. I have to admit we haven’t managed 3 sessions a day this week though, I’ve been gone too much. But we can do lots of good work this week until I have to leave for Denver. I took  him to a friend’s, first time since his injury February that he’s been off the farm, and we took our maximum, on-the-flat-only-no-trotting-or-turning walk. What a treat to do even that!

Our big news this week at the farm is that the Barn Swallows nesting over a light fixture in the garage finally fledged. That means we can finally shut the garage door again, Sushi can finally go outside again and I can stop cleaning up bird poop on the floor of the garage. But it was well worth it: I lucked out and went outside about sixty seconds after the first one made its initial flight, and I got to watch for 30 minutes while all five of them they learned to fly. It was one of the most beautiful things I’ve ever seen. First they flapped frantically as they flew about thirty feet in and out of the garage, looking barely able to keep from falling. It was impossible not to watch and feel the drama of it. They flew in and out back and forth, chirping and squawking crazily, and slowly, ever so slowly, began flying further out, higher and lower, learning how to bank sideways, how to float up and dive down. The stopped their distress calls and changed their voice, and I swear by the time I quit watching they were saying LOOK WHAT I CAN DO!!!!, while they soared and twisted and dove down like fighter jets in a movie.

Here they are a few days ago with their fat little baby beaks and their feathers not yet all grown out: 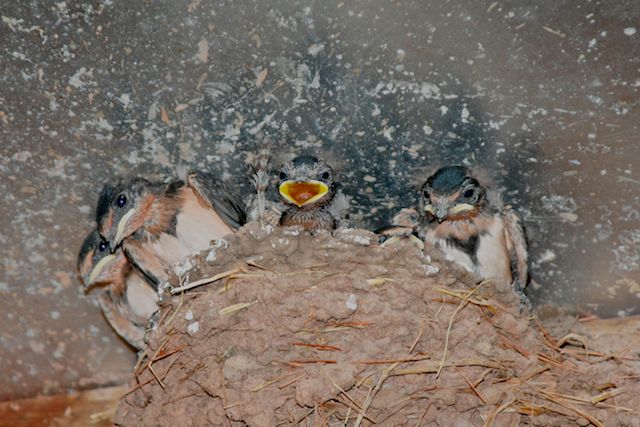 And here’s one resting after her first flight. It’s not a great photo, but I couldn’t resist! She’s looking oh-so-grown up now! Any pilot will tell you the tricky part is landing, and she clearly would agree. Her first landing wasn’t pretty, but within 20 minutes she could take off and land like a pro. 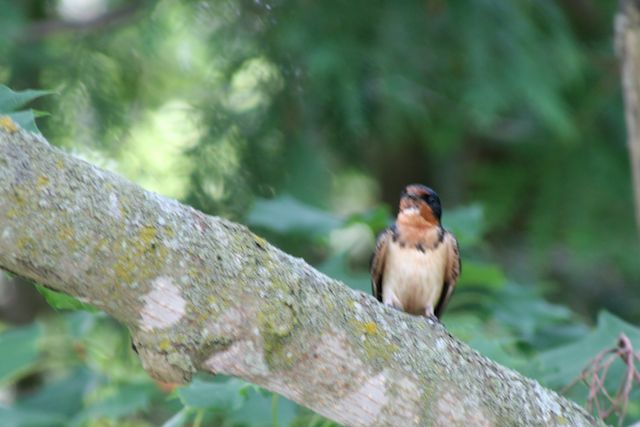