Welcome to an ongoing inquiry about the behavior of people and dogs.
Blog Home >> Animals and the People Who Love Them >> Case Study – Dog/Dog Reactivity – Hailey 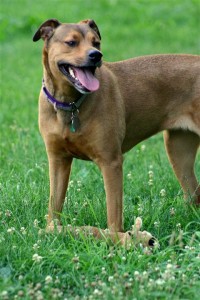 Here’s Hailey, who was one of the demo dogs in Pittsburgh a few  weeks ago. Crystal is fostering Hailey, and had only had her for about a month before the seminar, and we were both concerned that her general arousal levels might make the seminar too much of a challenge for her. As it turned out, she did very, very well. She was definitely reactive when she saw other dogs, but it did not appear that she was fearful or intent on aggression. Hailey was the classic bark/lunger who became so excited when she saw another dog that she lost control. She could work herself up into increasing levels of excitement until her behavior became difficult to manage.

Managing arousal did seem to be the name of the game here. Hailey was extremely friendly to me, mildly stressed about being on the stage but handled it well, and was happy to take treats from me and Crystal. Teaching her to look back on cue (“Watch” or LAT) is a great idea for Hailey, but I thought she was also a great candidate for a method that reinforced her for making her own decision. This felt especially important for Hailey, because self control is something she needed to work on (like lots of terriers and bully breeds especially, I find. Agree?)

Unlike Ceilidh, the demo dog before her, Hailey didn’t “lock on” in anyway when she saw another dog, she just became more and more excited and difficult to manage. As I always like to do, we started with giving her treats up on the stage to relax her and teach her that there were great things up there. Then we had a mellow dog enter the room, as far away as possible. Because Hailey’s behavior was variable, we were able to immediately click and treat when her head turned slightly toward us and away from the dog. At first I clicked on a turn of no more than a half an inch, but very quickly the head turns got bigger and bigger until she’d whip her head around to us like a champ. Because we were well under her threshold, she learned extremely fast that “look at other dog, look at Trisha/Crystal” gets a treat. Note that there was no cue… we waited for Hailey to initiate the behavior herself, and because she was under threshold AND had variable behavior (unlike Ceidlih) we were able to make tremendous progress. Following the steps of BAT, we didn’t just click and treat a head turn, we backed up considerably after the click and before the treat.

One could argue that backing away from the other dog wasn’t positive reinforcement for her, because Crystal knew what she REALLY wanted was to play with the other dog. But I couldn’t see it working out to let her get closer and closer, and having only had a month’s experience with her it just wasn’t wise to let her off leash to run to the other dog and on leash she’d just go back to being overly excited. So we waited for a head turn, clicked, backed up and made a fuss over her, giving her great treats. Gradually we allowed the other dog to get closer and closer, so much so that Crystal said she’d never been able to be so close to another dog on leash before without going crazy. Yeah!!! We were all thrilled at how well she did, and Hailey looked just as pleased with herself.

I suggested that they continue working on BAT and also work on focusing her attention on cue, along with lots of exercises that will help her learn to manage arousal levels (stay, wait at door, leave it, etc.). The best news came in an email not long ago from Crystal, in which she related that Hailey had been playing with another foster who himself had a rude, pushy play style and Hailey clearly became uncomfortable. Hailey eyes began to change and she stiffened and began to focus on the other dog as a target, not a playmate. Crystal said her name (which she’d been working on) and Hailey immediately broke off and came to her. Then she was released to play again, but this time when the other dog got rude Hailey excused herself and went over the Crystal all on her own. (Jackpot!!!) Soon they were playing well together and Hailey had learned that some dogs just, well, play better than others. Yeah Hailey! (but I add, Yeah Crystal for being so observant and for working so hard on foundation exercises.) By the way, Hailey is a foster, and here’s information about her if you are interested in a dog who was an absolute delight to train at the seminar.

MEANWHILE, back on the farm: HOT HOT HOT. It’s miserable outside. 95 or 96 or 97 and high humidity. Argh, I’m a disaster in hot weather, so Willie isn’t getting much in the way of walks outside right now. His exercise is all just his PT inside right now, with short walks outside. (Granted they can’t ever be longer than 15 min now, but in this heat they are more like 10!). I’m grumpy about the weather (65 degrees is about right for me and I don’t mind minus 20 anywhere near as much as I mind 90). However, as much as I’m whinging (a Scottish word for complaining, love it) about the weather, I have AC and can at least sleep well at night. I feel so sorry for people and dogs who have no option. We’ve been worried about the sheep, and so Jim set up a huge fan in the barn that is helping them considerably. Good news with the flock is that Spot seems to have recovered from mastitis. She was first diagnosed with pneumonia, but didn’t get better after treatment. During the next vet visit it became obvious what the problem was, so after a course of injections she seems much, much better. Thank heavens, I thought I was about to lose another ewe.

So last week I was worried about Sushi (diagnosed with kidney failure) and Spot and (always) Willie’s shoulder, and this week Spot is recovered, Sushi’s kidneys look GREAT after taking out an infected tooth and Willie is doing okay. He has healed up from the surgery on his bicepital tendon, now it’s all about his 2 damaged ligaments. We were reminded how crucial it is that he do as little as possible for another 2 months unless it is PT. (The surgeon wanted him to do NOTHING for 4 months and THEN start PT, but she agreed after talking to the therapist that it was okay to slowly, carefully do specific exercises.) So we are continually reminding ourselves to go slow, and are aware that he’ll have to wear the Hobbles for awhile once he is allowed off leash. Once that happens, there is NO way I am going to be able to restrict the use of his shoulder! 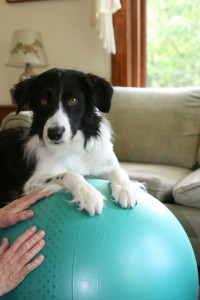 Here’s Willie doing one of his exercises, balancing on his forelegs on a slowly moving exercise ball. We both think this one is fun.

Jim will keep up the exercises while I’m in Denver, hope to see some of you there.

Come up and say hi if you make it Denver and read the blog or FB!