Welcome to an ongoing inquiry about the behavior of people and dogs.
Blog Home >> Animals and the People Who Love Them >> Cats, Dogs and Thunder 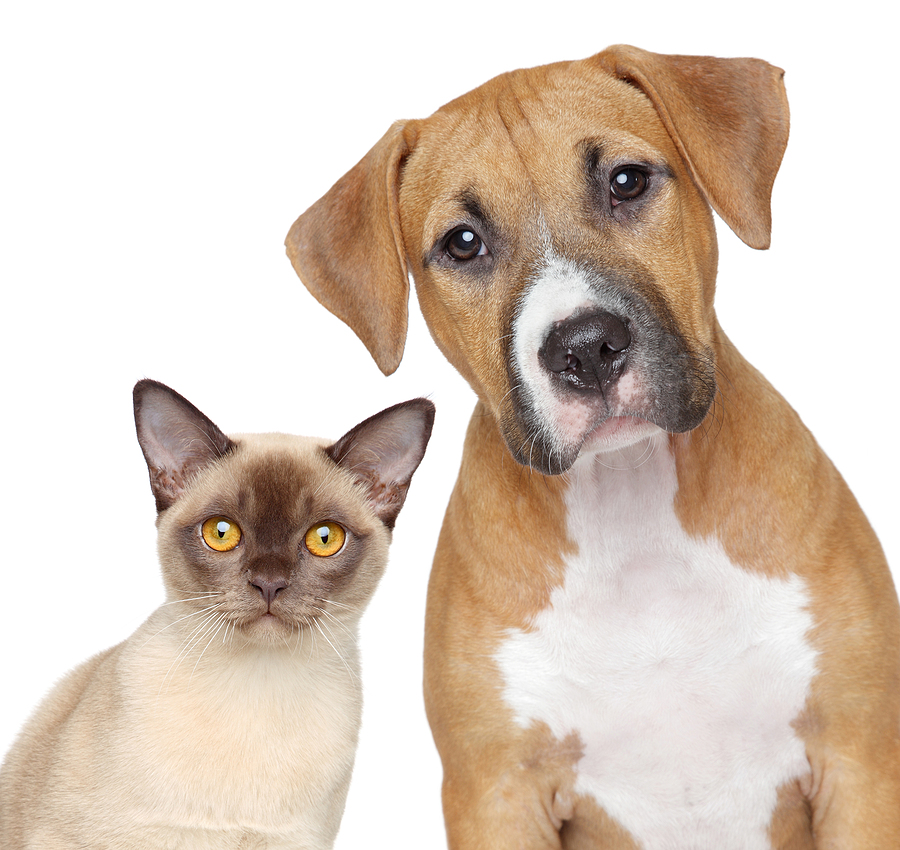 I was finishing up reading the Sunday paper yesterday, while thinking about which topic to choose for today’s blog. I always have several lists of potential topics, scattered hither and yon, one usually tucked under the To Do list that begins “Be More Organized.” Almost done with the newspaper, skimming through the Parade section, I came across Marilyn vos Savant’s column, Ask Marilyn, and Presto Chango, a new topic was chosen.

In the column, a reader asks why dogs are more afraid of thunder than cats, given that “dogs seem more intelligent.”  Marilyn’s response was that, indeed, cats are far more intelligent than dogs, and being smarter, have learned that thunder won’t hurt them.

Oh my.  Oh my my my. There are two roads I could go down here. First is the issue about the intelligence of dogs and cats. You are welcome to jump in here on this one, but I’ll save my own comments on this issue for another day. (Summary: It’s a bit more complicated than that.)

What I want to talk about this week is the less complicated assumption that both the reader and a “highest IQ ever” columnist make about more intelligence leading to less fear. Spoiler alert: Nope.

It’s irrelevant whether dogs or cats are “more intelligent.” (Even those terms are somewhat meaningless–intelligent about what?)  Here’s what we do know: We of course know that lots and lots of dogs are afraid of thunder. It often takes years to develop, but can be traumatic and dangerous for dogs, and exhausting for their owners. It’s reasonable to ask why dogs are so frightened of thunder. Early in my career I had the opportunity to ask John Paul Scott just that, and he answered “Because God is growling.” 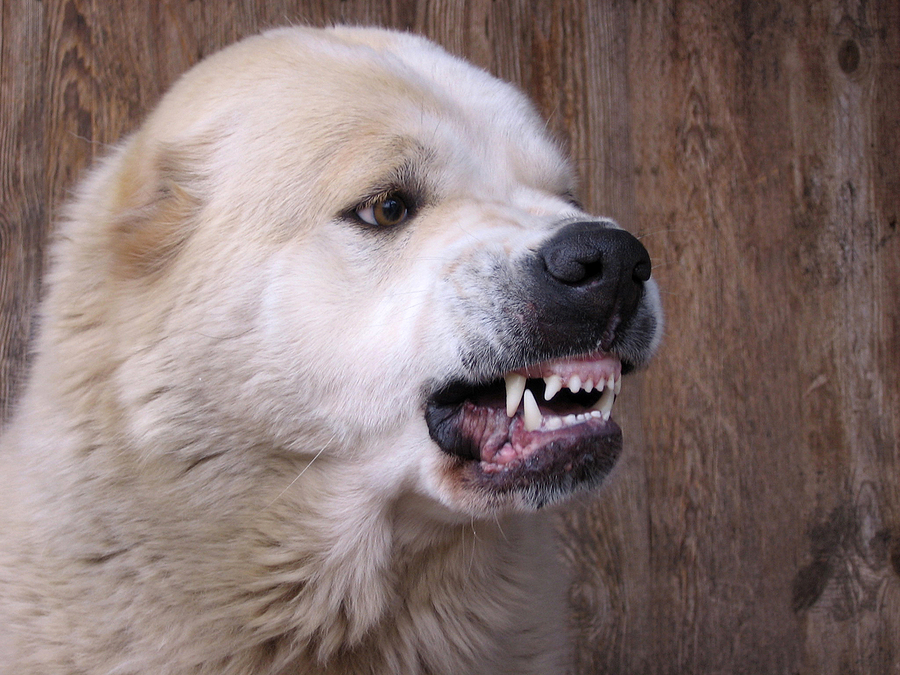 That’s about as good a summary as one can make. Thunder sounds like canine threats of violence, the loud, low frequencies blanketing a dog as being attacked by the entire universe. It also correlates with house-rattling booms and crashes that make even the best of us jump out of our beds. Cats growl too, but the more agitated they get, the higher the frequency. The reverse is true of dogs. Two male cats threatening each other sound nothing like a thunder, but rather the high-pitched shrieking in a horror movie. (There are some good examples of low frequency canine growling on my DVD, Lost in Translation. They contrast with the higher frequency play growls that don’t alarm dogs when heard through a speaker.) 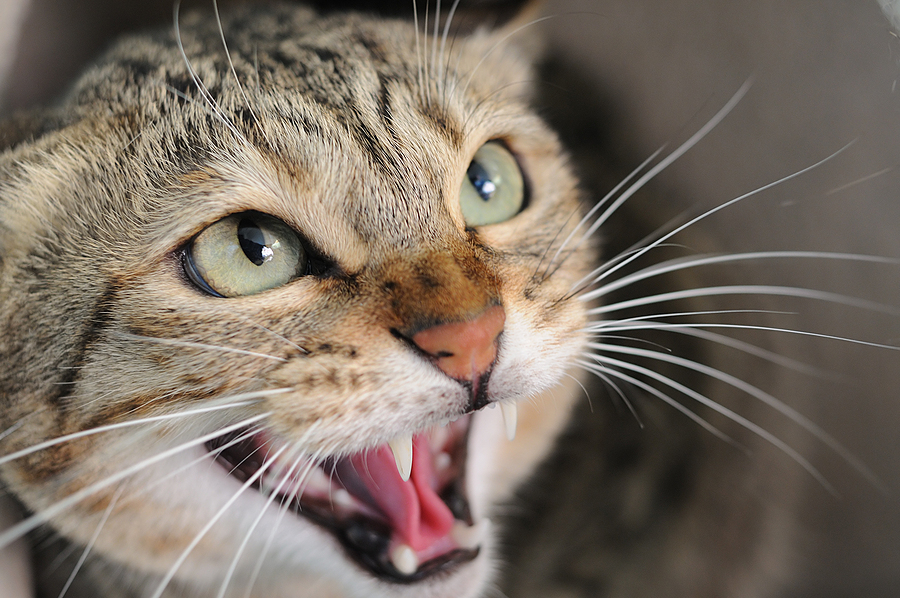 But all this leads to my ultimate question: Are any cats afraid of thunder? Perhaps it is more common than we might think? I have tried to remember if any of my cats have been afraid of thunder and can’t remember an instance where it was clear that they were. However, frightened cats often go to ground–it’s one of the reasons why it can be hard to find a lost cat. Frightened cats often find a hiding place, perhaps under a porch, and will stay there for days, ignoring an owner’s plaintive attempts to call for them. Perhaps then, it is less obvious if a cat is afraid of thunder? But still, based on all I know it seems that surely fewer cats than dogs are frightened by thunder. 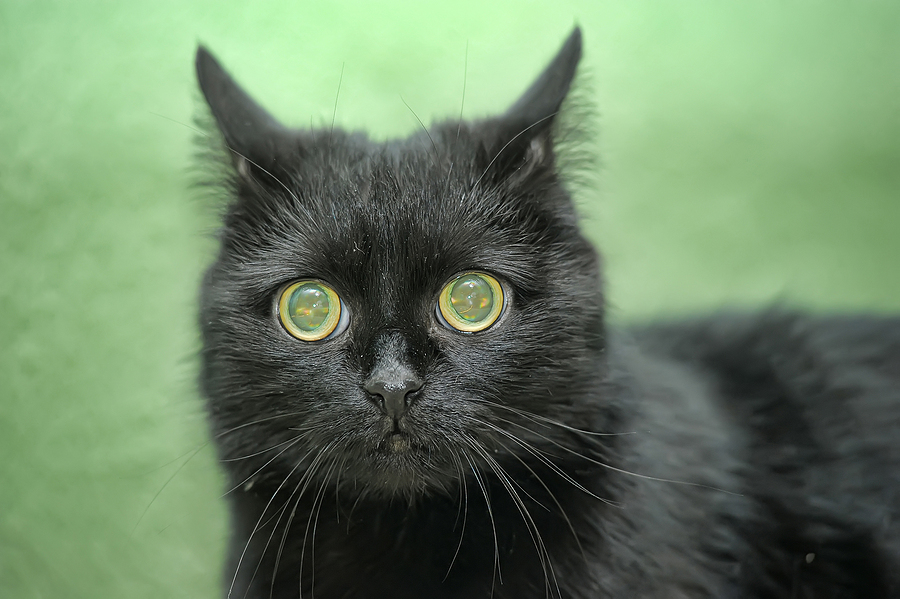 But now I find myself curious, and grateful to the Sunday paper for initiating what could be an interesting discussion. If you have or have had cats, has any one of them behaved as if fearful of storms? Inquiring minds want to know.

MEANWHILE, back on the farm: We were at another sheepdog trial this week, best described as From Ecstasy to Agony compared to last week. From best, to worst. Argh, poor Maggie. She got beaten by the sheep, pure and simply. I mentioned last week, although perhaps not clearly enough, that Maggie’s good runs were on “her sheep,” meaning she got to play defense, not offense. Maggie hates having to push “heavy” sheep, but we’ve been working on it hard all winter.

But to no avail this week. The sheep were the opposite of last week’s, and required dogs to push push push to move them forward. It used to be that the most common cue you heard was “Lie Down” or “Slow Down,” because the dogs were moving the sheep too fast to maintain good control. But that’s not true anymore. All the trials we’ll be in this season but last week’s are with the same flock of sheep. They are worked by dogs for lessons often at their home farm, and trucked from one trial to another during the trial season. The sheep learn that the dogs won’t hurt them, and become almost blase about the whole experience. Rather than moving fast, asking a dog to play defense, they require a dog to be on offense all the time, and push them forward. The sheep also learn very fast where the exhaust pen is, and put tremendous pressure on dogs who are trying to prevent an escape to the pen. (That’s the one time they’ll run.) They are also brilliant at reading dogs, and can tell when a dog is lacking in drive and confidence. Many of the dogs had some struggles this week at the trial, but almost all of them in the Open class were able to get around the drive and finish the course. But not my Maggie.

I said last year that I didn’t know if Maggie was able to run well in the Open class (the hardest one), but I’d do my best to try. North America’s top trainer/handler, Scott Glen, has tried to help me with Maggie, and if I was a more experienced handler I am sure I could have helped her more during her training. But he’s always concluded by kindly saying “Maggie’s a great beginner dog.” Meaning she probably just doesn’t have it in her to flourish in Open. I also need to learn to do a better job handling her during her runs. There are some split second nuances that I haven’t yet mastered that could have helped her.

Maggie was quiet after her runs and the next day. Was she a bit under the weather? She’d been up several times during the night before with diarrhea. Was she responding to me being disappointed? Were these sheep harder for her to deal with than the first time she worked them a month ago, when she struggled the first run but did a great job the second? Will the sheep just get harder and harder for her in the future?

I’ll run her in the next trial and see how she does. If it doesn’t go well I’m not sure I’ll run her again. (You can’t go backwards in levels–if you’ve run a dog in Open you can’t go back to running in the intermediate class (Pro Novice or Open Ranch it’s called.) As much as I want to trial, finding it endlessly fascinating and complicated and challenging, I’m not going to put her in over her head over and over again.

Ah, life. (And a reality check: It’s just a game. Maggie is a brilliant farm dog and I love her like life itself. I just wish I had the skill experience to help her more than I have.)

On a happier note, Skip got to do some work at the trial, helping friend Rowie and her dog Grig take the sheep off the field after each run was over. He did a good job, although he too has some “issues” that I need to learn how to handle. Here he is practicing his regal look while waiting to go to work. 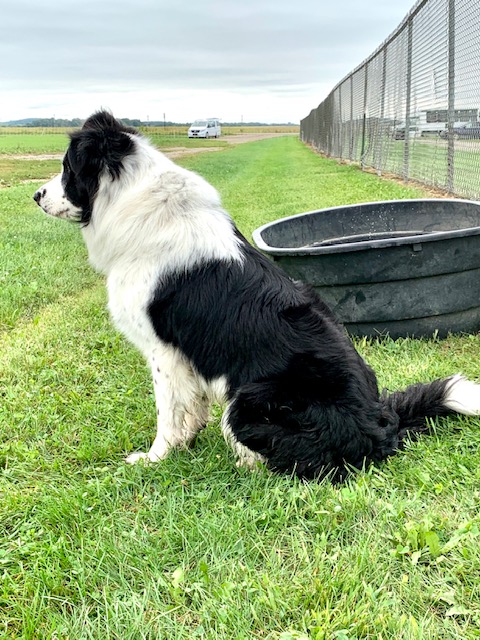 Skip’s lovely rough coat was not an advantage Sunday morning when he left our wood’s trail and got himself into THE WORST BURRS IN THE WORLD, Virginia Stick Seed. They look so small and innocent, but each small burr divides into 20 or 40 or possibly 10,000 little burrs, and they are hell to get out. Ten minute walk, 40 minute comb out. 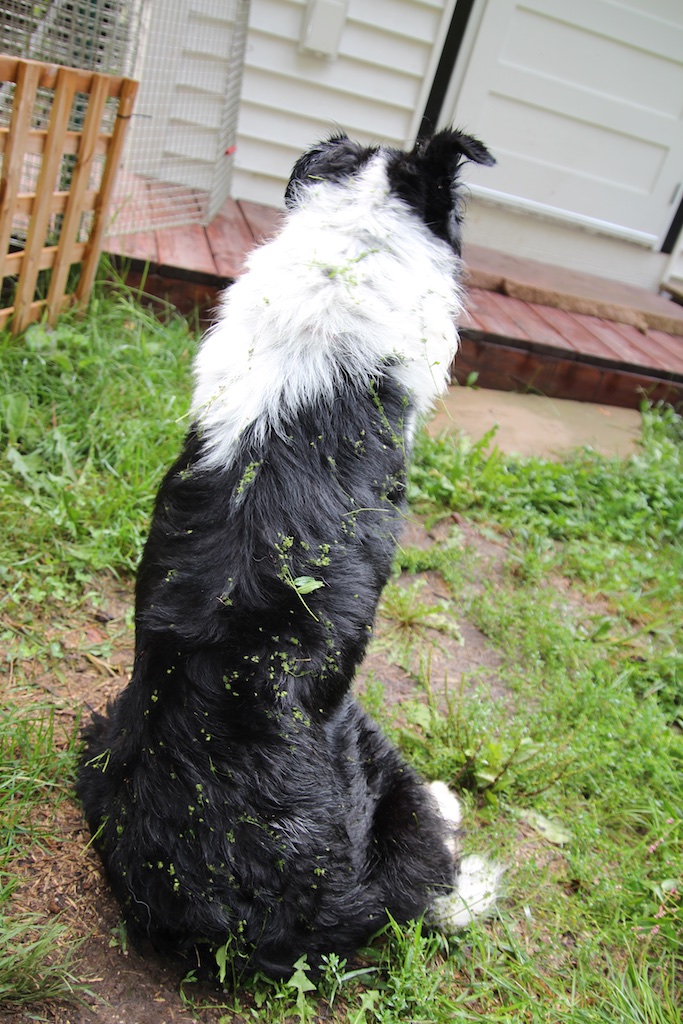 This photo doesn’t even show the worst of it.

I assuaged myself by walking around the yard with my camera. Lots of beautiful color out there. 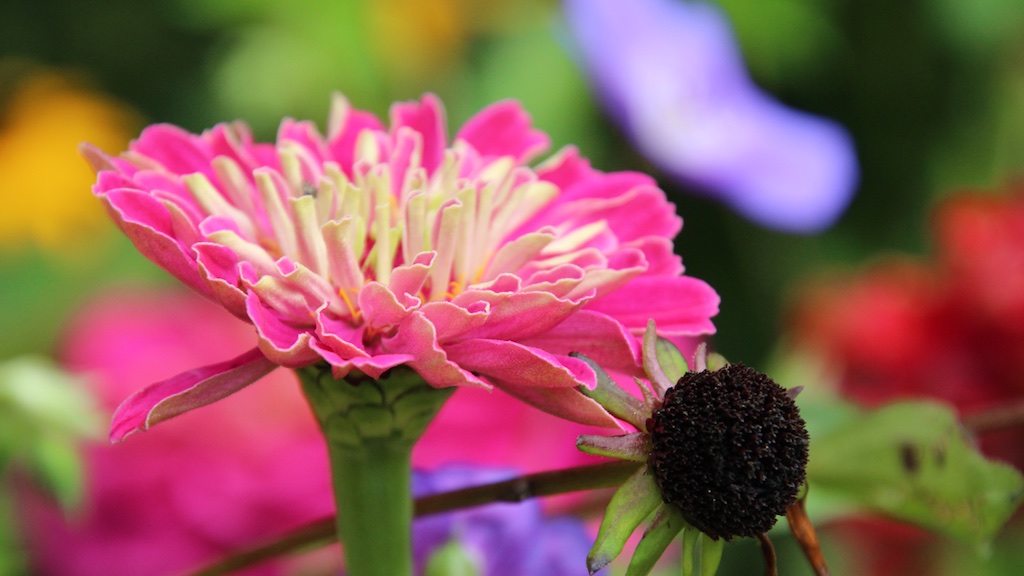 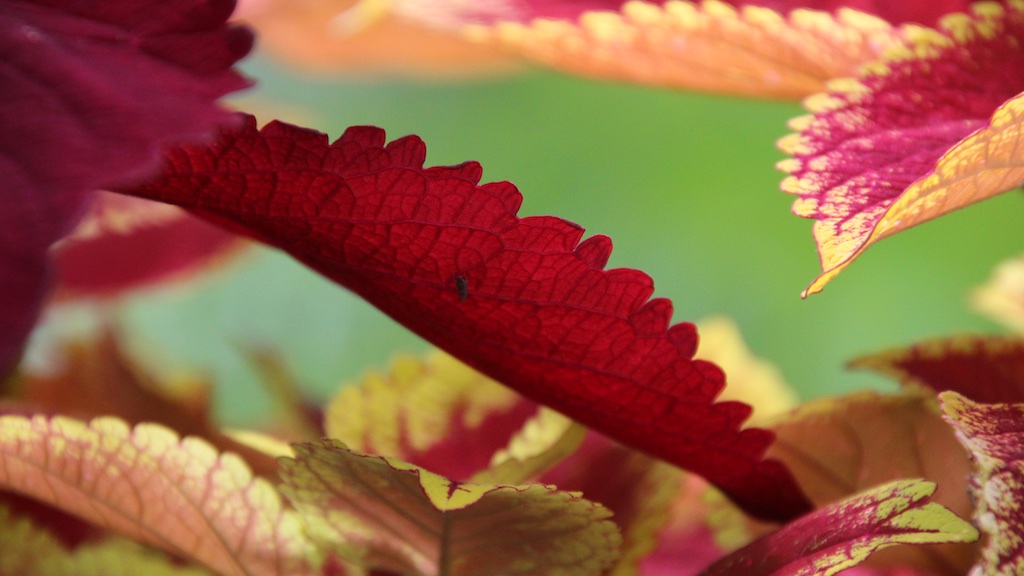 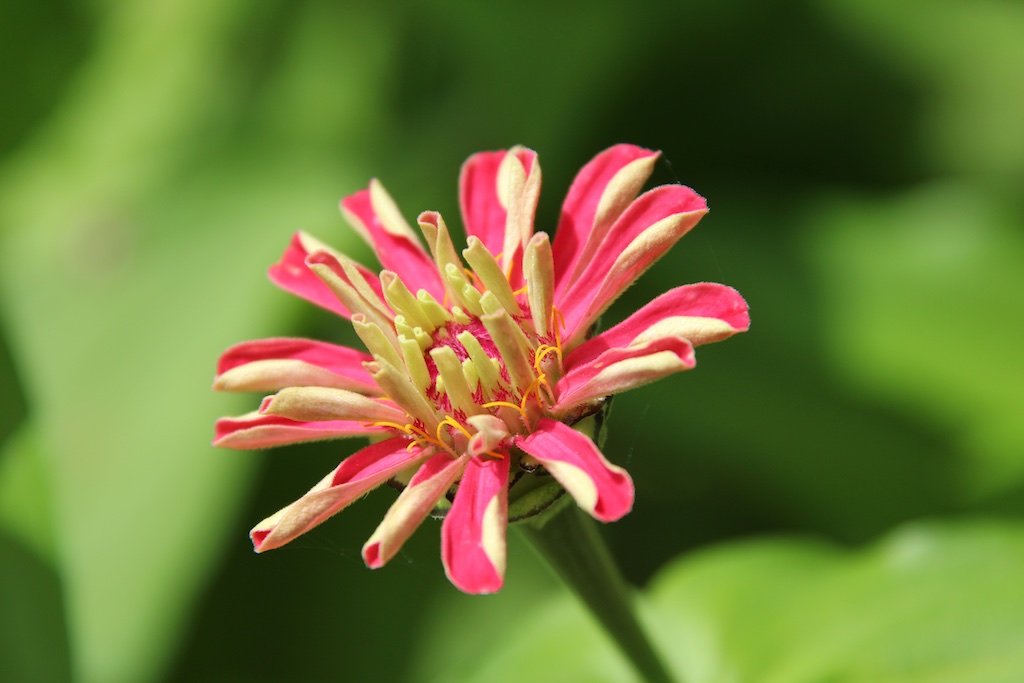 Here’s Nellie at my feet, complaining that I am paying far too much attention to the flowers and not enough to her. I sort of wish I could turn my head around like that too, but then I start thinking about the movie, The Exorcist. 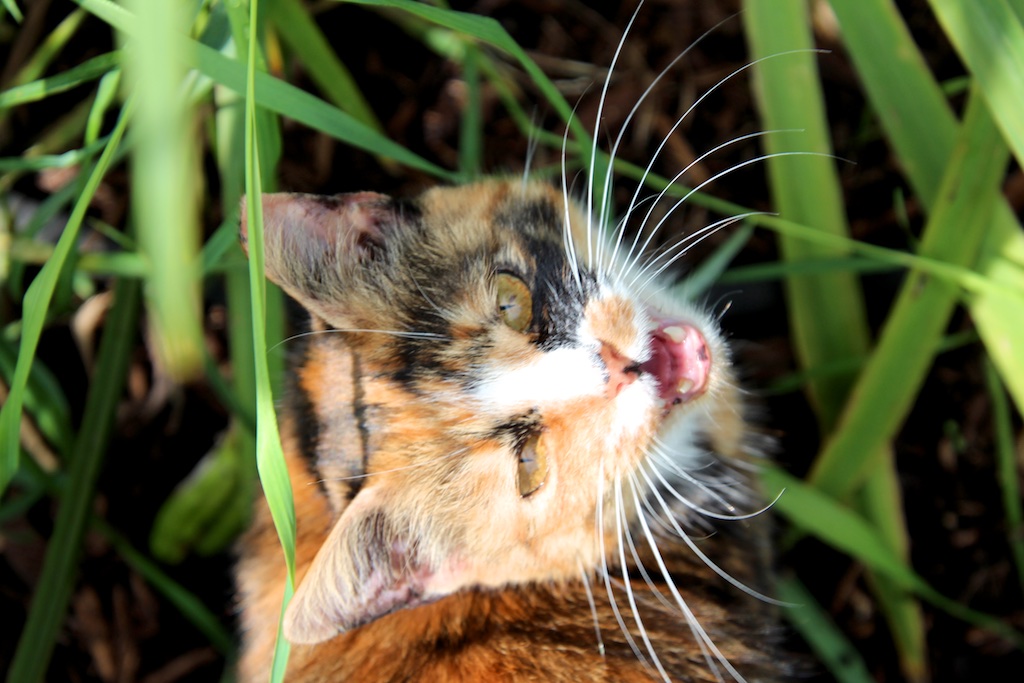 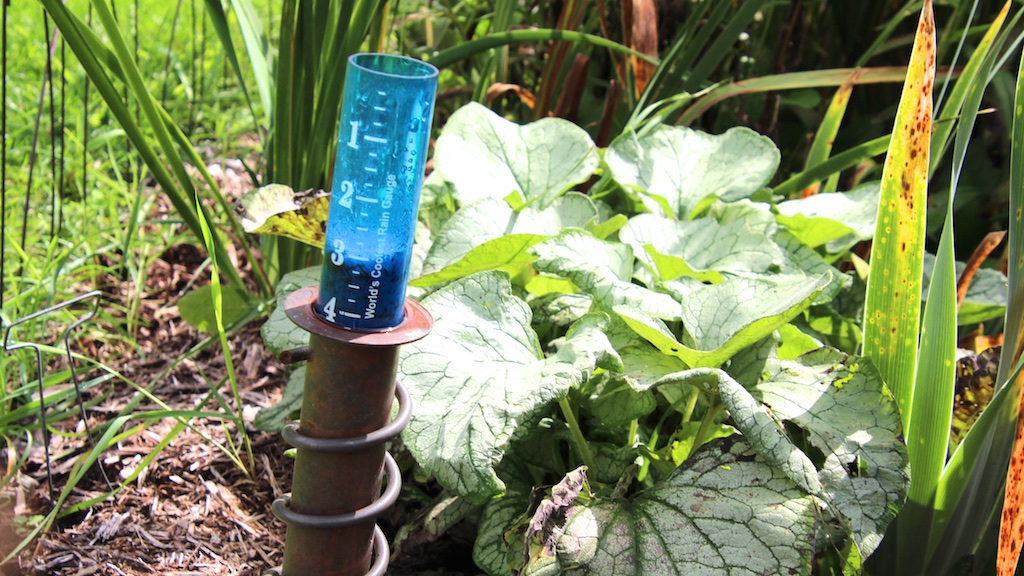 Finally, after a endless August of heat and no rain, we got 4 beautiful inches of rain in four days. I would do anything to be able to send it all to the west coast. My thoughts are with all of you living through the smoke and the fires. If you know of good places to send help to both people and pets, please let us all know.