Welcome to an ongoing inquiry about the behavior of people and dogs.
Blog Home >> Dog Books >> Cesar Millan and Merial

You may have heard by now that the pharmaceutical company Merial (they make Heartguard and Frontline) have teamed up with Cesar Millan to promote their products. They are offering veterinary clinics a deal this summer in which they can give any client who buys Heartguard or Frontline a free DVD from Cesar titled “Mastering Leadership!” They will even include a DVD that clinics can use to “entertain” their clinics in the waiting room (they did not use the word “educate”) with segments from “Mastering Leadership with Cesar.”

I’m happy to say that the American College of Veterinary Behaviorists and several CAABs (Certified Applied Animal Behaviorists) have written Merial to complain. The paragraph below is an excerpt from a letter by CAAB Suzanne Hetts Ph.D.

“Scientific research about how animals learn, about canid social behavior, and social relationships between dogs and humans does not support Mr. Millan’s training methods or his view of those relationships… This marketing campaign makes it clear that Merial did not do their homework when it comes to the science of animal behavior. Instead of relying on the academically trained, scientific community of veterinary and applied animal behaviorists or even to certified dog trainers, you instead turned to a media personality. Because you clearly don’t care about science when it comes to animal behavior and training, I now wonder what other scientific information you might choose to ignore in marketing and product development.”

Here Here, Suzanne!  The American College of Vet Behaviorists also has written an excellent statement, click on their name to read it. If you are so inclined, you can let your views known to Merial by writing Scott.Line@Merial.com. I say all this knowing full well how many people love Cesar and how much they think he has helped dogs. I personally believe that  Cesar loves dogs without question and wants to help them. I love that he advocates for more exercise for dogs and illustrates that many behavioral problems can be solved. However, I am deeply at odds with his perspective that behavioral problems are primarily caused by “dominance” issues, and that owners need to be physically forceful to achieve “leadership.” (I do appreciate that he has switched a bit from “dominance” to “leadership”… although I have no doubt that he and I define it differently and I worry that his use of it will undermine its value.)

I’ve never met Cesar (would love to) but I suspect that he is one of those remarkable individuals who has incredible presence. You know, one of those people who walk into a room and everyone stops talking to look at them. Gradually the person is surrounded by people who just want to stand next to this person who has… something? But what? What is presence?  Good question–Malcolm Gladwell first brought it up to me when we were talking about an article he wrote on Cesar, and he said he was thinking about writing a book about it.  I suspect that would be tough. How do you measure presence? Who has it and who doesn’t?

No matter what it is, people with it can do all kinds of things that the rest of us can’t. My suspicion (and it’s only that) is that dogs also respond to Cesar’s presence (confidence? being comfortable in your own skin?). That also means that those methods won’t work so well with people who don’t have that quality. Thus, his methods are problematic from two perspectives: they are often based on a misunderstanding of dominance and what it has to do with canine behavior, and they also assume a quality that Cesar doesn’t even know he has, and can’t be replicated.

Personally, I’d love to have an open and sincere conversation with Cesar about this. If I can get the podcast up and running, I’ll do my best to try to have him on. This issue will come up often I suspect for me in the next few days, because soon I’m leaving for meetings in Chicago between me, other CAABs and Board Certified Veterinary Behaviorists to find common ground and resolve some conflicts. (Ex: statements by some vets that all behavioral problems are medical problems and can only be diagnosed and treated by veterinarians, whether the vets have had any training in behavior or not. Guess which side of that argument I’ll be on? I’ll keep you posted…).

Meanwhile, back at the farm: It’s still brutally hot and humid, I worry most about old Martha, who lungs clearly are still not up to par. More people die of the heat than the cold, especially the elderly with respiratory troubles, and that describes Martha 2.0 to a tee. Willie and I only move the sheep in slow motion (if possible) and only early in the day or late in the evening.  The bird life hasn’t slowed down though, here are the serviceberries by the kitchen window that the Catbirds and Cedar Waxwings are gorging on. 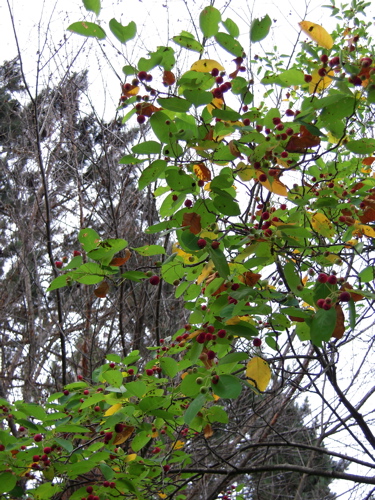 And here’s Will, hoping I’ll send him in to get the sheep. Note his ear position, targeted towared me, anticipating a signal I suspect. 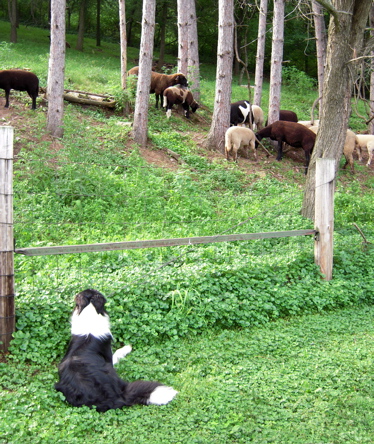