Welcome to an ongoing inquiry about the behavior of people and dogs.
Blog Home >> Animals >> Come to Africa with Me

I’m leading another safari in Kenya and Botswana this August. Wanna come? It probably will be my last. 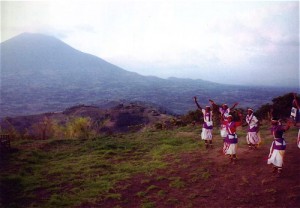 The first time I went to Africa to lead an animal-behavior-focused safari, I cautioned the participants the day we arrived that we weren’t going to see what we usually see on a nature special on television. “What you see on a nature special is the result of hours and hours and hours of long, boring observations, while waiting to capture the excitement and beauty and drama that eventually will be edited down to a series of amazing sequences. We’d be wise to have our expectations be realistic: we’ll see some wonderful animals and some interesting behavior, but it will be far cry from what you see on TV.” 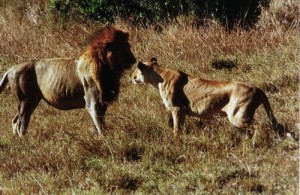 ~ A herd of elephants stumbling across a pride of lions, and ears flapping and trunks trumpeting, chasing the lions out into the savanna.

~ A cheetah and her two adolescent cubs fighting off a flock of vultures from the Grant’s gazelle she had just killed.

~ Thousands and thousands of Wildebeest “gnu gnu gnu-ing” (that’s what they sound like) as they stream across the Maasai Mara (the Kenyan Serengeti) on the largest migration of animals on earth, accompanied by herd after herd of zebra, hundreds and hundreds of gazelles–and the lions, cheetahs, leopards and hyenas that follow them. It takes your breath away (and this next trip is going during the migration, just fyi!)

~ An antelope mom and young cautiously circling a salt lick (a natural one) all night long, while a herd of elephants dug up the salt, and stroked a new born baby with their trunks (they were about 20 feet away from us, we could count the tiny hairs on the babies gray skin). Baby elephants are called Tembo Toto in Swahili, a perfect name for them we all agreed–the cute factor of baby elephants is out of the box. Seeing  them in person simply can’t be described. At dawn, we arose for breakfast, only to watch a leopard leap onto the back of the same antelope mom and subsequently drag her up a tree.

The elephant mother below walked across the river and right in front of our jeep–very common but never boring! 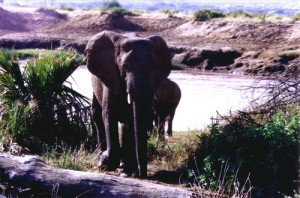 The two adolescent male lions below were part of a nine-member pride that walked out of the grass just before we were about to leave for ‘home.’ I had to take OFF my telephoto lens to get the picture, they were literally right next to our vehicle (which they completely ignore, as if it wasn’t there!). 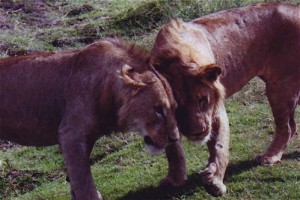 ~ Samburu warriors dancing their “I’m about to prove my manhood and go kill a lion” dance, followed by the “I’m about to be married and go into the hut with my new wife” dance. All I can say is that some of us considered staying a little longer than planned after the last dance…. Here are some young Samburu women watching the dances with us. 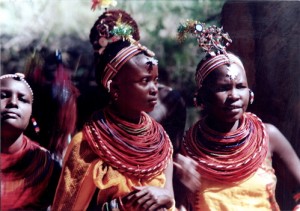 ~ A Thompson’s gazelle being born, (and knowing that a pride of lions was not far away…)

~ A pack of hyenas squabbling over a kill they had made the night before. We spend several hours parked just a few feet away from them, and eventually were able to identify each as individuals. Imagine how satisfying it was when the next day we say a single hyena and, in unison, exclaimed “It’s Greybelly!!!!!!”

~ Maasai children singing for us in thanks for the school supplies we brought to their school. Try to do this and keep tears from streaming down your face; just try.

~ More gorgeous, colorful, outrageous birds than Dr. Suess could make up and, as importantly as all the above…

~ Some of the kindest, sweetest, dearest people you could ever imagine meeting. I have been consistently treated with tremendous care and kindness by the Africans that I have met. There is a saying that you can leave Africa, but it will never leave you, and I think that is partly because of the people. The sunsets and the animals and the light (golden!) is part of it, but for me, the kindness of the people stays with you the longest.

Here are some Maasai with their cattle, having trekked miles as they do each day, for water. I never saw them use dogs for herding, but the dogs play an essential role at night, barking at the slightest hint of a predator trying to break through the thorn bush ‘fence.’ 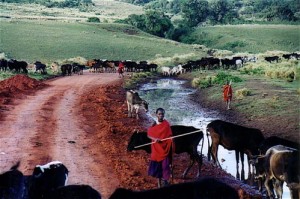 You’ll have lots of opportunities to meet village dogs… you find them in lots of places, including in a Samburu village where I took this photo: 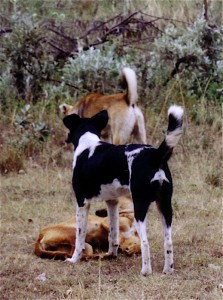 On every trip, I have taken either my nephew or one of my nieces, and I only have one left! I’m going to New Zealand in 2010 and Scotland and back to Alaska in 2011, so I just don’t know if I’ll get back to Africa again. I love to travel but I love to be home more, and I just don’t like to be gone too much.

I hope that some of you can come, I’ve begun to think of you as a kind of family.  Here’s why you might want to consider it: This animal behavior-focused safari different than most safaris in which you stop when you see an animal, give everyone a chance to take a picture, and then drive on. We’ll be much more patient, and will focus on observing and learning about behavior, rather than just capturing cool snapshots to impress people back home.

We are going to Kenya during the height of the Wildebeest Migration, and staying at places that put us right in the middle of the action.

We’re staying at Fantastic Places. For example, we’re staying four nights in the Kenyan Serengeti, the Maasai Mara, at an amazing tent camp, Tipilikwani Camp.  In Botswana we’re staying in luxurious tent camps, Chitabe Camp and Chitabe Trails which are right beside a research camp where the African Wild Dog Project has been studying African Wild Dogs since the 1980’s.

You’ll be with Expert Guides who know and love the people of Africa as much as the animals.

We got a Price Break! Whoppeee… Africa on sale! The economy hasn’t helped tourism in Africa, so the Kenyan safari is now 10% less than it was previously. This is also the perfect time to go because tourism is down, and that means the parks will be much less crowded. The first time I went to Kenya tourism was also down, and it was like having the park to yourself. (It is possible to have 20 vehicles parked around a pride of lions, all from 5 different groups when it gets busy….Going at a ‘down’ time is a huge advantage.)

We’re going at The Best Time. We’ll be in Kenya at the height of the Wildebeest migration and in Botswana when it’s cool and dry. It is usually horrendously  hot and muggy, and I am a major Border collie when it comes to heat. I am miserable when it’s hot and humid, so we went way out of our way to go at the perfect time with the best weather. It’s also a great time for families… you’ll be home well before it’s time to get ready for school.

It is SAFE. Okay, there is always some risk involved in traveling, but believe me, I wouldn’t go on this trip if I didn’t believe in my heart and soul that it is safe.

You can do both trips, or either one, depending on your time and resources. You can come from anywhere in the world, and meet us in Amsterdam en route, or Nairobi.

If you want to learn more, go to my website to African Safari. There you can read more details about the trip, and download a pdf that describes the entire trip. I should mention that I did take all of the photos here, but that my best ones (pre digital) are all in albums. The potential for photography is astounding, and everyone ends up with covers for National Geographic! Here’s a lion responding to us driving up right beside him. Note the signs of extreme stress… 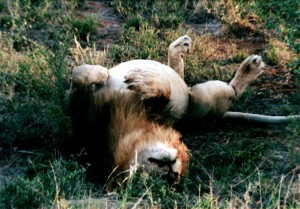 Hey.. there are ALWAYS a million reasons not to do something (I know, I use them to put off doing my yoga every day!)… but maybe this is the time to JUST DO IT!