Welcome to an ongoing inquiry about the behavior of people and dogs.
Blog Home >> Animals >> Comparative and Canine Cognition; Don’t Sleep, There are Snakes

I just finished Everett’s book Don’t Sleep, There are Snakes, and a more thought-provoking book I can’t imagine. As I mentioned in my earlier blog, the author spent much of his life over the last 30 years with a hunter-gatherer tribe, the Piraha, in the Amazon basin. Everett began his work as a missionary and a linguist; his work with the Piraha changed his faith, but not his dedication to studying language.

What makes the book so interesting is his discussion about what the Piraha culture has to say about the derivation of human language. Everett is very clear: he argues persuasively that both Chomsky and Skinner got it wrong (in relation to language). In brief, Chomsky argued that language is innate in humans, and that there are universal ‘laws’ of grammar that are passed down genetically. Skinner argued that all language is learned and that genetics had nothing to do with it.

Everett argues that neither are correct. He presents a compelling case that language and culture can not be separated. He suggests that culture and environment play a significant role in shaping not just language, but how individuals see the world. From this perspective, grammar (a major focus on linguists for decades) is far less important than “culture-based meanings and constraints on talking of each specific culture in the world.” He says that studying linguistics apart from anthropology and field research is like studying chemistry apart from chemicals and the laboratory.

It is not surprising that I am impressed with this argument, given that it fits into my world view as an ethologist: that arguments about “nature versus nurture” are as meaningless as arguments about which is more important, the ingredients or the recipe, to the success of an omelet. (Starting with hard boiled eggs wouldn’t work out too well.)

Speaking of ethology, I’m reminded of how the sensory system of each species creates a different reality than that of other species. For example, because bees see colors that we don’t (we even call colors we can’t see variants of ones we can–“ultra violet” for example), their visual reality is completely different from ours. While we might admire the pure yellow petals of a composite flower, bees see a far more complex bloom with lines and stripes pointing like arrows to the nectar within. Thus, there really is no such thing as one “reality,” and Everett’s work reminds us that that is true within our own species.

The Piraha are only interested in events that were personally witnessed by the speaker, are unable to interpret two dimensional photographs, (practice and training helps a bit, but not much), use no numbers, love to talk but talk about a narrow range of subjects, and most amazingly, seem never to worry. They don’t even have a word for “worry.” This does not mean they live an idyllic life, not by a long shot. They can suffer terribly from disease, predation and romantic entanglements gone sour.

And this is why I’m writing about them here: Everett’s work brings up the question of “what is unique about being a human?” and “what do we share, and not share” with other animals, like our dogs? The lines are getting more and more blurry, aren’t they? Surely dogs live more in the present than most of us.. but how much of that is innate, and how much is cultural? I’d argue that most dogs are a LOT happier than most people… how much of that is innate, and how much cultural? And has living with humans affected dogs such that our culture has influenced their behavior? You’re probably aware of Brian Hare’s work on communication between people and dogs in which he argues that dogs are innately better at reading ‘pointing’ signals from humans than non-domestic canids and even chimpanzees. (I’ll write more about this some time, I have some questions about it.). Could it be that dogs learned to worry from living within a western culture? (Can dogs worry? Do they? Is “worrying” different than experiencing anxiety?)

Lots to think about. Meanwhile, it’s New Year’s Eve morning and I’d better get back to my pathetic attempts to keep up with my email before I take a few days off. We got a lovely light snow last night, the sun is shining, and I’m yearning to get back home to Jim, Will and Lassie. We are awaiting (at least Jim and I) an unplanned set of lambs from Snickers and Truffles, who were bred by some ram lambs when they scrambled over a fence downed by a fallen tree. I’ve been worried the lambs would be born when it was brutally cold and we’d go out to the barn to find frozen baby lambs. But I’m going to take a page from the Piraha… worry? What’s that?

I hope you have a thoughtful and loving New Year. It’s been quite a year, hey? I hope, whatever is happening in your life, that you are able to be ‘in the present’ as much as you can, and to savor the beauty that surrounds us all. Here’s a detail of the barn door in the snow . . . 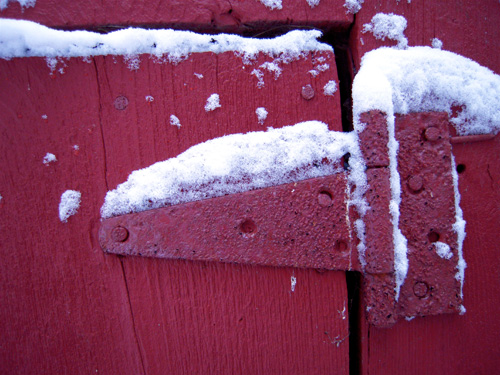