Welcome to an ongoing inquiry about the behavior of people and dogs.
Blog Home >> Dog Behavior >> Confrontational Techniques Elicit Aggression

Remember the movie Groundhog Day, in which Bill Murray wakes up every morning to repeat the same day, over and over? That is a bit of what it feels like to write about the value of benevolence in dog training, and the problems associated with aggressive, confrontational techniques. And yet, I just can’t stop, because there is still a flood of advice about using force and confrontation to correct a dog for ….. (fill in the blanks)…. because 1) misbehavior is a sign your dog is attempting to dominate you and 2) you can only counter it by using force. Sigh.

Those of us arguing that we should be teaching our dogs, rather than forcing and threatening them, have an excellent study by Veterinary Behaviorists to support our perspective. Meghan Herron, DVM, DACVB, Frances Shofer, DVM and Ilana Reisner, DVM, DACVB, of the Matthew Ryan Veterinary Hospital of the University of Pennsylvania, asked clients what methods they had used in the past, and how the dog responded. (Applied Animal Behavior Science 117 (2009), 47-54). 140 people, selected because the dogs were brought to the clinic because of “aggression” problems, responded to their survey. Granted, surveys asking people about past behavior are never ideal, we humans being poor historians of our own behavior, but I would argue that this retrospective study has a lot of value. The owners were asked what methods they had used in the past, a question I also always asked of my clients, and to describe their dog’s response to the best of their recollection.

Not surprisingly, leash corrections were common, used by 71% of respondents and 74% yelled “No” in response to their dog’s behavior.  However, 18% reported using an “alpha roll” and as many as 26% used a “stare down” to “correct” their dog. 11% admitting to hitting or kicking their dogs, and 14% to roughly grabbing the dog by the scruff or jowls.

Here are the numbers that matter: The most confrontational, and I would argue, aggressive, behaviors on the part of the owners resulted in the highest levels of aggressive responses from the dogs. 43% of dogs responded with aggression to being hit or kicked, 38% to having an owner grab their mouth and take out an object forcefully, 36% to having a muzzle put on (or attempted?), 29% to a “dominance down,” 26% to a jowl or scruff shake. You get the idea. Of course, these are all dogs who were seen by veterinary behaviorists for aggression-related problems, but it makes the data even more important. Violence begets violence, aggression begets aggression.

An important distinction: Note that the authors, correctly, did NOT label the owner’s responses as “punishment” or “reinforcement.” For one thing, “punishment” is an action that results in a decrease in behavior, so if an owner stares a dog down (argh! who ever started that idea anyway!) and the dog becomes more aggressive, the stare down was not punishment. Second, there are all kinds of actions correctly termed as “positive punishment” that have nothing to do with force or confrontations. For example, I use tons of food (positive reinforcement) to teach dogs a solid stay, and respond to breaks in a stay with a Body Block (Here’s a video as an example.). A Body Block is an example of positive punishment (adding something to decrease the frequency of a behavior), but it is not confrontational or threatening if done correctly. (Note how little I move in the video, and how cheerful the entire episode is.)

Thus, the study is not so much about “reinforcement” and “punishment,” as about what happens when you threaten your dog, or forcefully and physically respond to misbehavior. Please be clear that I am not saying that if one of us occasionally raises our voice to our dog, or has a moment of humanity and loses our temper, we are going to destroy our dogs forever. Neither am I saying that aversives are always bad: aversive events are part and parcel of life, and we all need to know how to handle them, dogs included. However, as many of us have observed for years, using force and confrontation as a primary method of dog training often backfires and creates some of the very problems it is trying to solve.

One of my favorite parts of this study is that it was conducted by two Veterinary Behaviorists (Meghan Herron & Illana Reisner, both, DVMs and board certified vet behaviorists (DACVBs), who I suspect (I am just guessing here), are the experts most likely to effect the behavior of many others in the field of medicine. It has been my experience that quite a few canine professionals, included some veterinarians, are still quick to buy into the “dominance-based” theories of dog training, and it is great that we have data to add to the observations of CAABs and progressive trainers that force elicits force in return. Surely the study is a great addition for anyone who would like to have some good science behind their arguments for benevolent, science-based training, so don’t hesitate to remind people that if you force a dog to defend itself, it will. Canine defensive behavior does not include calling a lawyer or writing a letter to the editor. Teeth will be involved. I’m just saying.

MEANWHILE, back on the farm. It’s GORGEOUS!!!  I mean, it’s make-your-heart-sing, heart-breakingly beautiful this week. There are tulips scattered as if someone sowed jewels instead of seeds in the flower beds. The wild plums are blooming and the air actually feels heavier with their scent. The birds at the feeder are a riot of color: Scarlet Tanagers, Indigo Buntings, Rose-Breasted Grosbeaks, bright yellow Goldfinch. The leaves are swelling from their buds, the grass is growing almost visibly, and the sheep are luxuriating in it.  Of course, the weeds are growing like…  wait for it…  weeds. The pasture needs reseeding, there are a gazillion plants to plant, thistles to battle, barns to repair, etc etc. Jim and I fall into bed after creaking up the stairs on the days we can work together on the farm. That’s actually one of the reasons for the extra work: we’re making major changes in the back yard so that 1) the basement will stop flooding and 2) we can put in a hot tub before fall. One more wonderful thing: the harvest has begun! Amazing, given that we had snow just a few weeks ago, but I’ve got rhubarb from the farm in the frig, resting beside asparagus from friends. I made a special dinner for a good friend last weekend, and we had fresh asparagus roasted in Meyer lemon-infused olive oil. Yummmmmmmm.

Here’s the Scarlet Tanager (thanks to Jim, he took the photo). The tanagers don’t nest here, not the kind of woods they like, but we got to watch them at the feeder for 3 days. Heaven! (And no, I didn’t boost the color, the bird REALLY is that bright. It’s crazy scarlet-orange-red, and one of the prettiest birds in the Northern Hemispheres, in my humble opinion.) 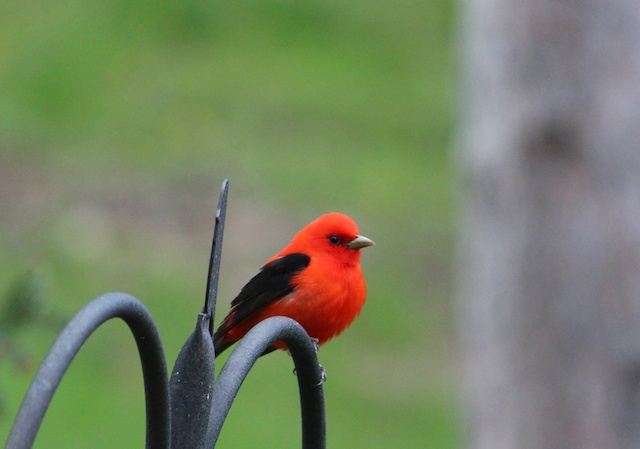 Here’s Rosebud napping under a willow tree with her triplets. Regrettably, she completely rejected one of them (Ralphie), the black and white one curled up on the bottom left. He never tries to nurse from her, but often hangs around with his brother and sister. He is completely imprinted on me, and if he had woken up he would have run to me, bawling for milk. It’s rather sad sometimes, he’ll watch the entire flock run up the hill, stand at my feet and look up as if to say: “And what are we going to do?” 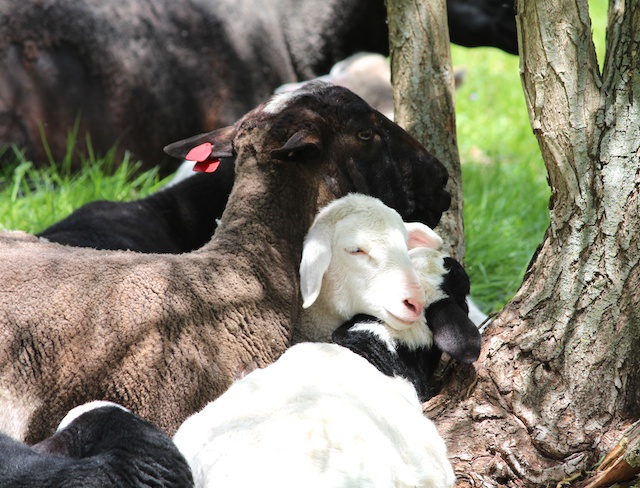 Some tulips to make you smile! I absolutely get why people became obsessed with these flowers, there are few flowers that make me happier. Smiles to all of you dear readers, with my gratitude for spending time with me. 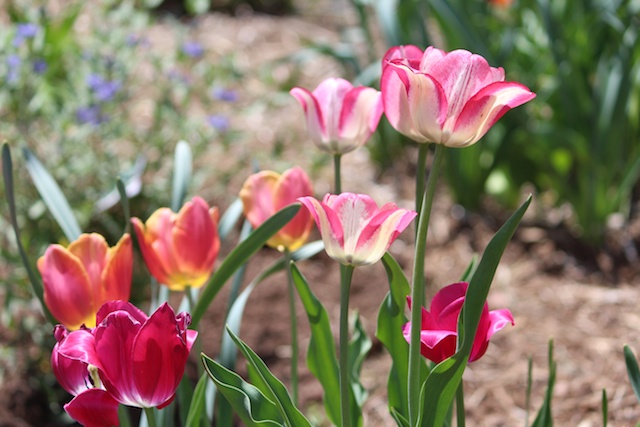