Welcome to an ongoing inquiry about the behavior of people and dogs.
Blog Home >> Animals and the People Who Love Them >> Considerations for a City Dog. And Dental Supplies. 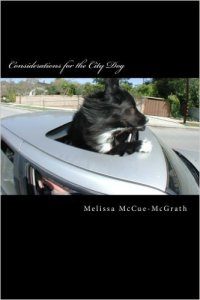 First, not to bury the lead–the book Considerations for the City Dog is a great book. I’ll explain more about that later in this post, but let me start by describing how I learned about the book:

In October 2015 my office got a call from the local post office. “You have to get down here right away. There is a package for you that is NOT media mail, although that is how it was sent. $2.61 is due before you can take possession of this package.” These words were said, through pursed lips by the postmistress in the Black Earth Post Office. They were followed by a lecture about the definition of media mail, that only books can be sent as media mail (which is less expensive than regular mail), and that we were to cease and desist engaging in such processes.

Except, uh, we didn’t send the package; it was addressed to us. Nor did we know what to do with the contents, which contained nothing but rusty dental tools. The package, badly damaged in transit, contained five or six large, metal dental picks, the kind that the hygienist uses when she cleans your teeth. And they were covered in a sandstone-colored film of rust. I am happy to say that, when I checked, the local dental office assured me that they did not order them. This is good, because that’s where I get my teeth cleaned.

The package showed a return address for M. McCue-McGrath in Massachusetts. Not someone I know. Curious, never having received rusty dental tools before, I wrote a snail mail letter asking if perhaps s/he had noticed at a speech I’d given that there was a problem with my dental hygiene? Or had a book or manuscript been sent which some how fell out? Sure enough, Ms. Melissa McCue-McGrath wrote back and explained she had gathered the courage together to send me a copy of her new book, Considerations for the City Dog. She sent if off media mail, being assured by the post office that it fit the criteria.

While all of us in my office were scratching our heads, Ms. McCue McGrath received a certified letter from the Black Earth Post Office that pretty much stopped her heart from beating, threatening her as it did with doom if she ever tried to use media mail again. She called the post office and finally the mystery was solved. Somehow, somewhere, the book must have fallen out in close proximity to another package containing rusty dental tools. The contents were switched, and somebody in an unknown city is wondering where the hell their rusty dental tools are. (And why would anyone ever want rusty dental tools? I am relieved to report–all other explanations being downright creepy–that artists and house painters use them to dig paint out of tiny cracks. Whew.)

Fast forward a few weeks later—I got the book, and loved it. She had me at the first chapter’s subtitle: “Bigger isn’t always better, and smaller isn’t always city-friendly.” Ah, music to my ears. How many times have I seen clients who lived in an urban area and got the wrong dog for their lifestyle? As Melissa reminds us, carrying a two-hundred pound mastiff up and down the stairs after surgery and the elevator goes out is not a prescription for fun. American Eskimo’s are small, adorable, and can be carried up the stairs in a crisis, and were bred to be watchdogs who bark when a butterfly emerges from its cocoon in China. Apartment dwellers, take note.

There’s lots to love in this book, from a realistic discussion about on versus off-leash considerations, dogs who don’t want to go on a walk in the city, why some city dogs really do need coats, and critically, the warning that hot concrete can burn your dogs paws. (The effect of substrate and temperature on a dog’s paws is often overlooked by even the most loving of dog owners.)

The fact is, all animals are strongly affected by their environment, and the life of a city versus a suburban versus a country dog is profoundly different. We are all wise to remember that.

Full disclosure: I ran into Melissa when on book tour outside of Boston when speaking for the New England Dog Training Club, and found her delightful. Bonded by our adventure with rusty dental tools, and fueled by a glass of wine, I asked her to come visit the farm sometime. She accepted, and was here the weekend before last. I was hoarse after she left, because the two of us couldn’t stop talking. And laughing. And more laughing. I laughed so hard my stomach hurt–think Pilates via the Comedy Channel. And then, of course, there was food involved. Did I mention gin? Her description of her visit is on her own blog, MuttStuff, and it is well worth a visit. So, does my friendship with her influence my recommendation of her book? Probably, so noted. But even if she’d arrived grim and grumpy, I’d still like the book. I just wouldn’t be so happy to have made such a new, good friend.

Jim convinced us to stop at the Pope Farm Conservancy for Sunflower Days on our way home from getting the worst manicure we’ve ever had (Melissa and I, Jim passed on the opportunity.) Trisha: “Please can you make him stop brutalizing my feet while ‘massaging’ them?” No, you don’t speak any English either?” The sunflower foolishness and the vision and generosity of the Pope family made it all worthwhile.

MEANWHILE, back on the farm: What a perfect example of city versus country dog. A friend Sarah brought her dog Jobin to have a chance to stretch his legs in the country, and let him play with a dog outside of his usual pack. Maggie needed exactly the same thing (she meets tons of dogs off the farm, but not many on it), and it was pure delight to watch them play together. Jobin started off trying to leap on top of Maggie, which she discouraged with some impressive tooth displays. (Too bad I got no photos of that, we were busy walking up the steep hill.) I didn’t say a word, because I thought her behavior was appropriate. And so was Jobin’s. “Oh, don’t play like that? Okay. Maybe we could play race horse then?” 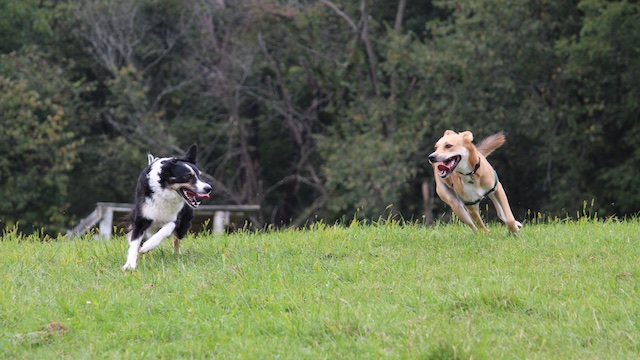 I can’t explain why I love this next photograph so much, given that Jobin is half out of the picture, but maybe it’s because it gives a sense of the speed and power of these two dogs.  They are both amazingly athletic. No fooling. 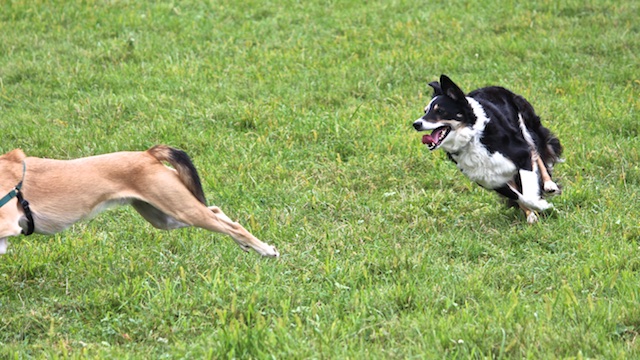 Maggie still felt a need to tell Jobin to mind his manners. He did. He just couldn’t resist trying every once in a while. Such a guy. 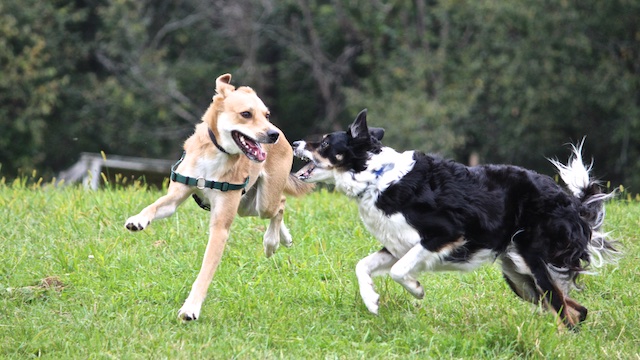 I hope your weekend included moments of joy too.