Welcome to an ongoing inquiry about the behavior of people and dogs.
Blog Home >> Sheep >> Could Breeders and Shelters Work Together?

Thank you so much for all your insightful comments about overpopulated shelters and whether responsible breeders could help reduce the number of dogs who enter shelters in the first place. Here are a few, admittedly somewhat random, thoughts about the issue.

One: Boy would I like to see more collaborative efforts between good breeders, shelters and rescue groups. I know that already occurs in some areas, and Here Here! to that, but I wish somehow we could more often use the energy and commitment of these groups to 1) publicize a universally understood definition of “responsible breeder” so that the public understands what that really means 2) create more, affordable support systems to help people when they need help with training and behavioral problems. (FYI, I too have heard a common reason given for a surrender is “owner moving,” a far more socially acceptable reason for giving up a dog than “I don’t want him anymore because he has become a pain in the ass…..”. We should remember though, if I recall it correctly, that one of Patronek’s studies found that most people gave up a dog only after many months of struggle, that they did not make the decision lightly and that most of them were distressed about having to give up the dog. I know that’s not true in all cases, and that some people think of dogs as furniture, but there are still many who would much rather not take a dog to the shelter.)

Two: Influence breed clubs to add behavioral stability to a criteria in shows. It is indeed true, as some of the comments have mentioned, that many clubs in Europe require animals to be carefully screened by vets, and are given behavioral and soundness tests before they can be registered. I visited a Warmblood stud farm in the Netherlands once, and was told that the club had decided only 12 studs could be registered that year, and the farm’s drop-dead gorgeous and bomb-proof stallion had been rated “number 13.” No foals for him, at least not that year. Wow. That would never fly over here in the land of the free, but at least we could start advocating that breed clubs add more to a championship than conforming to a structural standard and having a perfect gait. I know many competitors argue that just being in a dog show is proof enough of a dog’s disposition (me own mum used to make this argument to me), but you know . . . it’s not.

Three: Legislation? I don’t know. I am torn about this myself. On the one hand I agree with the argument that the ‘commercial’ facilities will be the least affected by this. Right now in Wisconsin we finally got a “Puppy Mill bill” passed, but the language says that breeders must adhere to standards that “are to be determined.” Last I heard the make up of the committee deciding on the standards had no behaviorist, no trainers, and lots of you guessed it, large scale breeders. (I’ll find out more about this in the weeks to come….it’s on my “To Do” list when I catch my breath from UW.) On the other hand, perhaps licensing will really will have the effect of 1) improving large scale breeders and 2) educating the public about what they should, at a minimum, expect.

Four: Helping breeders and rescue groups to be realistic: There were several comments from people who felt that some breeders or groups set their standards for a new home unrealistically high.  I have heard this complaint from quite a few people, including a dear friend and veterinarian with a long history of taking in special needs dogs and going to the mat for them. She finally gave up after waiting for 6 months to adopt an older, needy dog from the same group who had adopted her her first dog. She went so far beyond the call of duty with this dog that she deserved to be sainted, and yet the rescue club couldn’t decide if she was worthy of another one. How do we help breeders and groups be more realistic about good homes? Oh dear, I don’t know, but I do think we need to collectively work on it.

I might have a better idea of how to solve these problems if I wasn’t so damned hung over. Last night I had a total of one and a half glasses of red wine and I was a happy girl. Not so happy this morning though. It took me a few hours to figure out why I felt so crummy, and when I did, I actually ran into Andrea’s office and said “Oh good grief! Maybe I feel so crappy ‘cuz I’m hung over! Do you think?”).  I guess it is clear that this is not a common occurrence in my life.

Meanwhile, back on the farm: Willie is much better about the bedroom, but we’re not done yet. I did figure out that it’s all about the bedside table. If I even turn toward it to take a sip of water he’ll get up and slip out of the room. I am guessing it’s about the drawer, the one I open to get my reading glasses. It has a low, growly sound when it is being opened. But he’s better: a few nights ago he never left the room at all, (and then regressed the next night), and he now comes back in soon after I turn out the light (also on the bedside table.) One step at a time. I have to confess I have done no counter-conditioning, no DAP (which, fyi, I have found to be useful in some cases). This is out of pure laziness and nothing else. By the time I walk up the stairs at night I consider washing my face and brushing my teeth a significant effort.

It’s been gorgeous, just plain and simply gorgeous. The warmth we are experiencing is 2-3 weeks early, and a big worry to those of us who worry about the plants and the environment. It is also just a tad unsettling to see things happening when we don’t expect them, but the tulips and many of the trees are now in bloom. Here’s Willie lying in front of Tulip’s grave site, where she used to stand and broadcast her presence to the coyotes across the road. 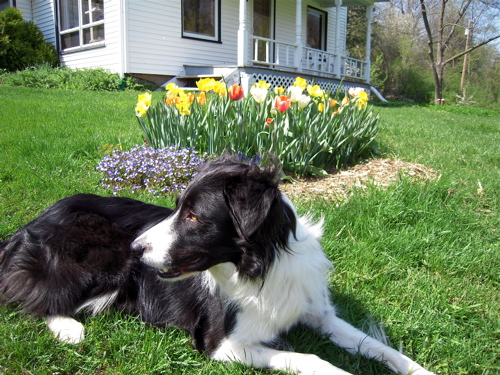 And here’s a fuzzy photo of the bottle lambs. Granted the only thing in focus is my chubby little hand, but I included it because what you see is pretty much what I usually see: a black and white milk shake of lambs jockeying for position. 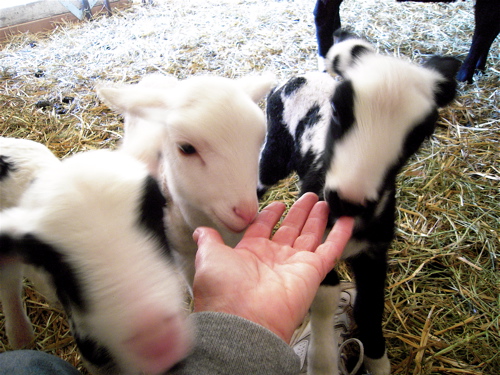