Welcome to an ongoing inquiry about the behavior of people and dogs.
Blog Home >> Animals >> Could you learn 1022 new nouns?

Move over Rico. Have you heard about the new article out in Beh’l Processes about a BC named Chaser who has not only learned names for 1022 objects, but has shown that she distinguishes between verbs and nouns? There’s more to this study, but let me start with the noun/verb issue. This is an especially interesting issue: one of the criticisms about the research on the dog, Rico, was that there was no proof he understood a label given to an object as a noun versus a verb. In other words, if you say “Go get your ball,” does your dog understand that “ball” refers to an object, or that the entire string of sounds means “go get something and bring it back”.

This is not a idle question. You may recall a post  I wrote about Willie’s difficulties discriminating between objects, “What Do Words Mean to Dogs?”, in which I described Willie’s inability to attach words to different objects. I concluded that he understood the words I used as verbs, and had little or no comprehension of them as labels of objects.

The authors of this study, John Pilley and Alliston Reid, not only taught Chaser to label over a thousand objects, they taught her actions as well as nouns (“nose” meaning touch with your nose, “paw” meaning touch with your paw, etc.) and combined them to test if she distinguished between actions and objects (“paw lamb,” “nose lips”). She had no problem with that test, scoring 100% in what she was asked to do.

In a third study, they trained Chaser to label certain objects as belonging to different categories. For example, after teaching her the names of 26 disc-like objects, each of which had a unique name, they subsequently taught her that all 26 objects could also be labeled in a category called “frisbees,” whereas all round objects could also be labeled in as “balls.” She had no problem with this task either, and it’s a particularly interesting one for me. Here’s why: a category (or common noun versus a proper one), like “ball” or “frisbee” is an abstract concept. Although there might be a “ball” in your home, the category of ballness–anything that is perfectly round, no matter what it is made of, what it smells like or how big or small it is–can not be picked up, handled, sniffed or licked. It is a concept, an intellectual abstraction that only exists in one’s mind. (Other examples of abstract categories are “big versus small,” different versus same.”)

The ability to form a “mental abstraction” is one definition of “thinking,” and “thinking” or using abstract concepts within the mind to inform future behavior is something that science has been hesitant to ascribe to non-human animals. First the data that some animals could understand abstractions came in from other apes, like chimps, then parrots, like Alex, and from marine mammals, and many scientists and philosophers have no problem agreeing that certain mammals and birds are able to form abstractions . . . but  dogs? As we know, dogs are not the most brilliant of problem solvers (a fact for which we should all be grateful; just ask the owner of a parrot.), but I find it fascinating, and important, that we are 1) including dogs in more and more studies and 2) doing the work to find out what really does go on “Inside of a Dog.”

So here’s the question to all of us: How do our dogs distinguish our spoken words, cues and commands? How many as verbs? How many as nouns? I am sure that Willie now categorizes “Jim, Trisha, Sushi and Sheep” as nouns, but I’m not sure about anything else. Indeed, it took some careful training to change “Where’s Jim” from ‘run to the window and get excited’ –even when Jim is standing beside you — to looking immediately at Jim no matter where he is. I suspect he (Willie, not Jim) may now understand that “toy” is any  object that he is allowed to play with, and “Where’s Your…” is a verb that means to go look for a toy. Most of his other cues are all verbs (Sit, Down, Wait, Get Back, Give me Kiss, Come Bye, Look Back, etc etc….). But now I’m motivated to find out more. This week I’m going to experiment, should be fun. What about your dog? Have you thought about whether your cues are nouns versus verbs?

MEANWHILE, back at the farm: The ewes with lambs are integrated into the flock and the lambs seem to be doing well. Poor little white boy was shivering Saturday morning when it was only 2 degrees F, and we tried to put his dog coat back on but he’s grown out of it. But the sun warmed him up and he’s getting grain now in the creep feeder, and he looks like he is doing okay. Hans Solo and white boy’s sister are fat as ticks, not sure why the little guy doesn’t gain as well, but we’re working on it.

Willie and I got to work a friend’s sheep this Sunday, working on cross driving at a distance, and had a great time. We just got back from working on it in my little pasture; not the same, but still worthwhile. Lordy we love working sheep!

Time to go feed the critters, it’s been dark now for quite a while and we’re all getting hungry. I’m keeping Willie slim to avoid unnecessary stress on any of his joints… wish someone would restrict my caloric intake. No, I take that back. Never mind. I did not say that.

Here’s another photo from our farm sitters, with Willie and the lovely Harper. Willie and Harper got along famously… size matters deeply to Willie, and he and Harper got along great. They didn’t play much, but tended to hang out together, just being dogs, probably pondering why we care whether a noise is a sound or a verb, as long as they get some food out of it  . . . 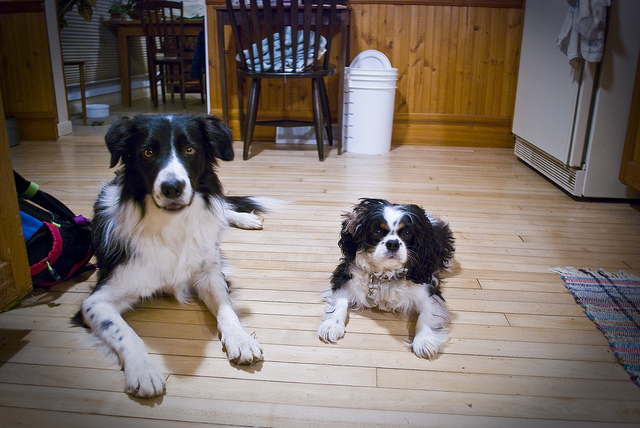 « What IS “training,” anyway?
Willie speaks: Only living things have names »