Welcome to an ongoing inquiry about the behavior of people and dogs.
Blog Home >> Animals >> Counter Classical or Counter Operant?

My last post started a good discussion about the use of the term “counter conditioning,” (and its use in treating Separation Anxiety) and one of the comments in particular reminded me that the term is often used differently by different people. For years I’ve always specified “counter classical conditioning” when talking about treatment for SA, for example, when one links something that elicits a positive emotion (like food) with something that elicits a negative one (like fear). But I noticed I’ve started being lazy and using the term “counter conditioning” when I mean counter classical conditioning. I suspect that’s because I don’t tend to use the term “counter operant conditioning.” Rather, I talk about “training an incompatible behavior” which is basically the same thing.

So, to be clear, Classical Conditioning has nothing to do with training a particular behavior. It is a way of linking and emotion with a stimulus (bell = feel good like you do when you smell food, or “Her getting her keys makes me happy cuz when she does I’ll get LIVER!). Operant Conditioning is about reinforcing a behavior (“If I sit and stay I’ll get LIVER!).

Regretably, none of this fixes the messy methods in the study I talked about in the last post, in which dogs were given  (among other things) food when the owner was about to leave and food when they returned. That’s just about the opposite of anything I’d suggest–the whole idea is to make “leaving good” and “coming home boring.” But still, it’s important to know what we’re all talking about when we’re talking, hey?

MEANWHILE, back on the farm, there’s a lot of conditioning, both operant and classical going on. 18 inches of snow + 40 mile an hour winds + 10 degrees below zero Fahrenheit elicit a range of emotions, from awe to fear to the peace that comes when there’s just not a darn thing you can do but settle in, stop worrying about whether you’ll make it out (you won’t), and accept that you’re but a tiny little speck in the universe. But the sheep need feeding, and Willie and I shouldered our way to the barn (well, he “shouldered,”  I “kneed”). Until Jim shoveled a path for them to their hay feeders this morning, I fed them inside the barn because the drifts were so high they couldn’t get out.

Here’s Spot and Truffles looking over one of the drifts after the snow stopped (and yes, it really was that high). 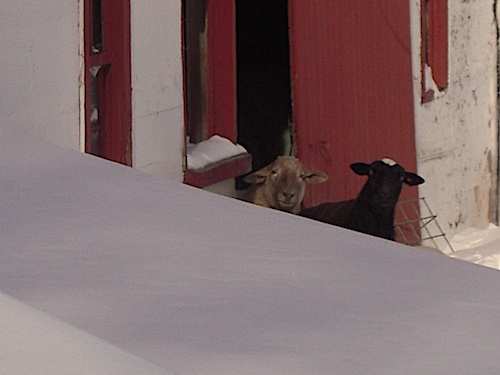 And, with fears you are absolutely sick to death of “Willie and Flying Disc and Snow,” here’s another one. It gives you a good idea of the snow depth in an area in which there was no drifting. 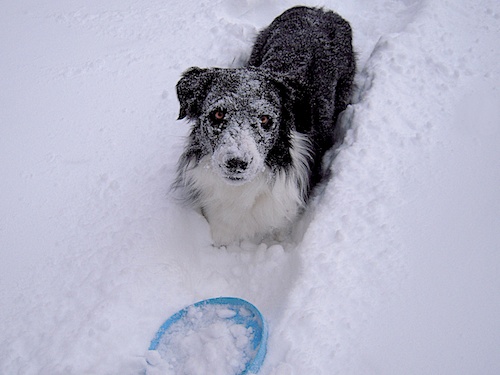 We’re supposed to fly out tonight for Austin, so cross your paws. We have to fly through O’Hare, not the smoothest of airports in the best of times (understatement alert). It’s been closed for 2 days so it’s going to be crazy anyway, AND this is prime time for Green Bay Packer fans to fly from the Midwest to Texas. I’m sure we’ll make it for my first speech at Lake Austin Spa tomorrow night, but it’d be nice if we could manage some “spa-ness” beforehand. Meanwhile, I know many in the U.S. are struggling with ice (much, much worse than snow) and a lack of power. Stay warm and safe, I hope things improve soon.