Welcome to an ongoing inquiry about the behavior of people and dogs.
Blog Home >> Animals >> Darwin, Emotions and early Adventurers

I mentioned earlier that I gave a talk at the University of Wisconsin last Saturday during their celebration of Darwin Day (it was his 200th birthday on 2/12, the same day as Lincoln’s 200th birthday). My talk centered on one of his less well-known books, The Expression of the Emotions in Man and Animals.  This book came out only a few months after the publication of The Descent of Man, and was designed to provide further support to his contention that humans evolved from common ancestors as other animals. He knew how profoundly controversial this would be (he delayed writing his first book, The Origin of Species, for twenty years, because he was so concerned about its reception.)

As we know, his concerns were well founded.  The contention that humans are related to other animals was a profoundly distressing thought to many then, as it is now. That is partly why he spent so much time documenting and supporting his argument. The Expression of the Emotions in Man and Animals was designed as yet more evidence that there is a continuum between people and other animals. In my talk I updated his arguments, bringing in recent developments in neurobiology and psychology that cement our close relationship with other mammals. (See Jaak Panskepp’s Affective Neuroscience. This is NOT beach reading, but if you like science and are truly interested in the brain and behavior, it is a phenomenal piece of work.)

The speaker before me, Sean Carroll, gave a fantastic talk about the adventures of three men, Darwin, Wallace and Bates. Each of these men lived in the 1800’s (they all became friends actually) and spent at least four years away from home (Bates over ten years) describing and collecting animals and plants from what, to them, were foreign lands. Keep in mind that at that time much of the world was completely alien to Englishmen like the three above, and their work was a revelation to many. They collected tens of thousands of specimens, discovering literally thousands of animals new to the biologists of Europe and Great Britain. They suffered through unimaginable hardships (Wallace spent four dangerous and exhausting years traveling up the Amazon, only to have the boat returning he and his collections burn up and sink all his work with it to the bottom of the ocean. Wallace himself barely survived.)

Each of these men were careful and fastidious recorders of the location of each specimen, and it was the combination of their extensive collections and their attention to detail that allowed them, Wallace and Darwin independently, to suggest that species of butterflies, for example, that lived on side by side islands and resembled each other closely were derived from a common ancestor. Bates’ most compelling evidence for evolution by natural selection was the existence of many harmless butterfly species that mimic the coloration of poisonous or distasteful ones. Now called Batesian mimicry, these copy cat butterflies avoid predation by looking like the ones that taste bad, and are only found in the same area as the model, nasty tasting ones. This system of self preservation could only work if the butterflies that best mimic the models are eaten less than the others, eventually selecting for closer and closer matches.

All this is described far better than I can here in Carroll’s new book, Remarkable Creatures: Epic Adventures in the Search for the Origin of Species. I’ve only read the first section on Darwin, Wallace and Bates, but I can tell you that it reads like a novel. I got late this morning because I couldn’t put it down…

Meanwhile, the weather has settled into typical February highs and lows, day times in the low thirties, night times in the teens. Although there’s no charm in dirty patches of snow and frozen mud, at least one can get around without struggling through knee deep snow or sinking into cold mud. I’m hoping to get in some long walks with the dogs this weekend, especially since I’m working the next two (seminar in Columbus, Ohio, speaking at IFAAB in Tucson). It’ll be good for Lassie, the deep snow was too much for her to manage on our last long walk, so I had to turn around and take her back to the car.

Willie’s shoulder surgery is scheduled for March 26th, when I have no travel plans for the next several months. I am working hard to look at silver linings: not having to sound like a control freak when I train house sitters (“You can throw the frisbee for him five times, but not six. You can only throw it so he lands up hill, never down hill….”), all the tricks I”ll teach him when he can’t do anything but walk for 6 + weeks. (He probably has a damaged tendon, the one that connects his bicep to his shoulder blade.)

Here are some photos of the dogs: Lassie in her new bed, Willie before the snow melted. Any thoughts about  \how much we can surmise about their internal states from their expressions? 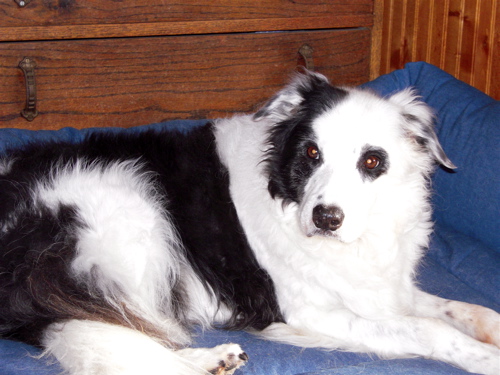 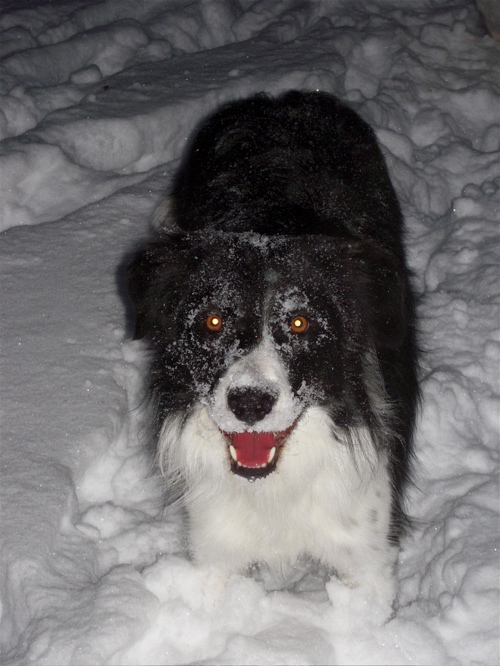