Welcome to an ongoing inquiry about the behavior of people and dogs.
Blog Home >> Animals and the People Who Love Them >> Different place, different dog? 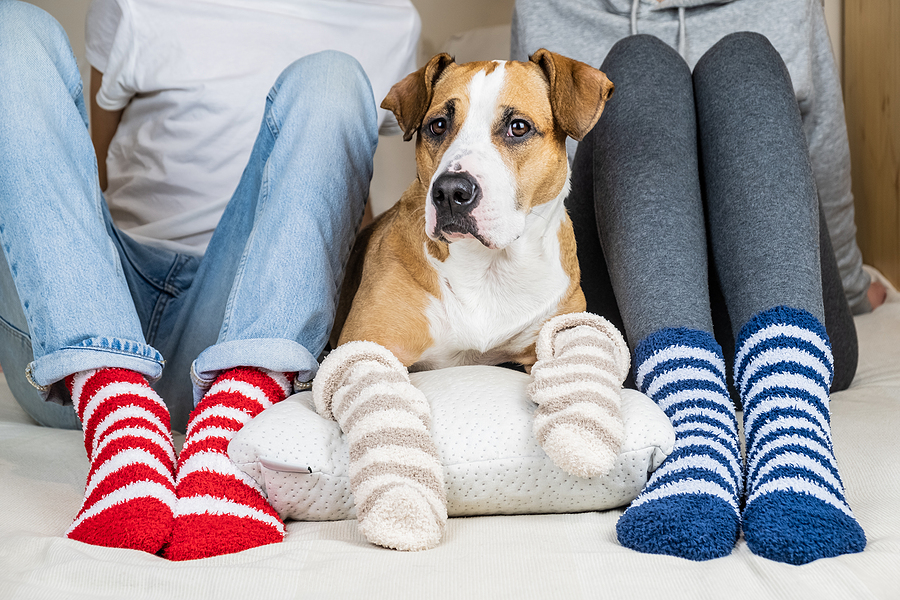 How many times have you heard about a dog who behaved one way in one home, and substantially differently in another? My answer: Lots. Lots and lots and lots.

I’m writing about this because the universe asked me to: On Saturday I went back to my post of June 22nd (2020), in which I asked readers what they’d like to talk about. Nan Kujolic made a comment that she’d had a dog who was dog-dog aggressive, seriously so, until she rehomed him into a place in which he would not be a danger to others. Where he became a model dog who got along with everyone. She was surprised, and also a bit ashamed. What did she miss? Did she do something wrong? I think all of us can relate to those feelings. 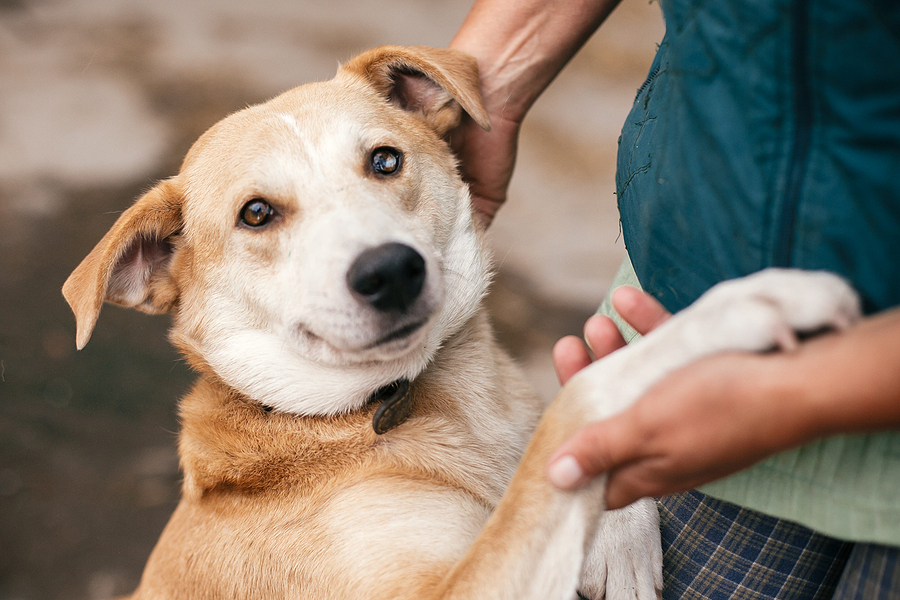 On the same day I talked to a friend who said that one of her dogs behaved one way while staying elsewhere, and exactly the opposite when he came back. What could explain that, she asked? I couldn’t answer that question, but, in true Piled higher and Deeper PhD fashion, I could say this: The number of dogs whose behavior changes substantially from one environment to another appears to be infinite.

Of course, there are many reasons for this: Different humans, different pack structure, country versus city, quiet versus noisy. And on and on. I can cite a gazillion examples in which an obvious change in the environment results in a change in behavior. For example, I had a client with an aggressive Aussie. In spite of the owner’s high-level training skills, she couldn’t turn him into a dog who was safe around others. She lived in a small, cramped apartment by a busy road, and after months working together we began a discussion about safely placing him in a different home. He found a quieter home with lots of space and autonomy, where he wasn’t in a constant state of over stimulation, and all of his behavior problems faded away.

Rehoming a dog you love is difficult to say the least. The client above adored her dog, and finding him another home was one of the hardest things she’s ever done. She’d adopted him from a shelter, and felt at first that rehoming him was like abandoning him. However, I told her, as I have hundreds of clients, that being a responsible dog owner means knowing your dog well enough to know what he needs, and then finding a way to get it for him. If that means another home, then greater love hath no woman or man. 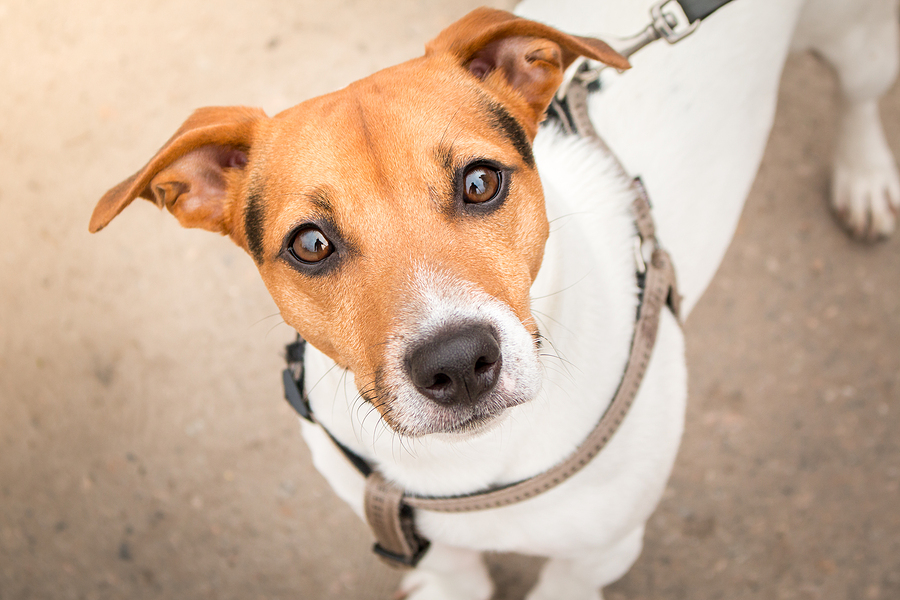 The changes in the environment that led to a change in behavior for the Aussie were obvious. He went from living in a cramped and over stimulating place to one that was spacious and quiet. However, perhaps more often than we acknowledge, a dog changes his or her behavior for no reason that any human can discern. We all want to know the reason, of course we do, because then we might be able to learn something from it. And, of course, we feel torn if a dog’s behavior problem magically goes away when it goes to another home with no possible explanation. What did we do wrong? What did we miss? How did we mess up?

Perhaps the answer is “nothing.” That it had nothing to do with us, or even the usual and obvious environmental changes. I will say right now that the tendency in the dog world is not to think that way. Rather, it’s to blame the original owner. I’ve heard over and over again that “She just didn’t understand him” or “If he hadn’t been nervous about the dog biting he wouldn’t have bitten.” And yet, I’ve seen countless examples of dogs changing their behavior because of changes in the environment that have nothing to do with the owner–perhaps going from being the only dog to one in a house with five dogs, or moving into a home without windows facing the street. I’ve also seen numerous examples of dogs, moving from Place A to Place B, with no discernible differences between them. Of course, there are always differences. Just because we don’t know what they are doesn’t mean they aren’t important.

This is a huge and complicated issue, but for this week, I’d like to focus on three things: 1) The environment in which a dog lives has a substantial effect on their behavior. 2) Sometimes the factors that change a dog’s behavior are obvious, sometimes they are subtle and impossible for us to perceive. 3) These factors often have little to do with the humans involved. It’s hard for us to acknowledge that “It’s not about us,” us being at the center of the universe and all, but it’s often not.

What I’m trying to say, having well and truly buried the lead, is here’s to a world with less blame all around, and kudos to those who learn what their dog needs, and then do all they can to help them get it. 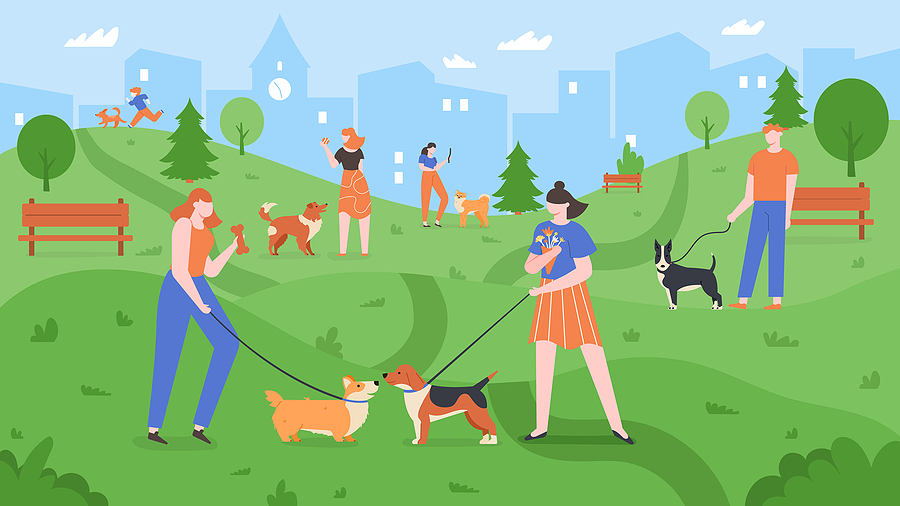 I’d love to hear your insightful (and compassionate) thoughts and experiences on this issue.

[* Please note that I am not advocating passing a dog around like a toaster if it has a behavior problem, nor sending a dangerous dog into an environment in which anyone is put at risk. Rehoming has to be done with complete transparency and a thorough understanding of what the dog needs to ensure its safety and that of those around it. That said, there’s no question that sometimes it is the kindest and safest thing to do for all species involved.]

MEANWHILE, back on the farm: Whoops. The frost killed all my Zinnias before I thought to cut them and bring them into the house. Not to mention the two large basil plants I’ve been nurturing all summer for the pesto to come. Now the pine nuts in the cupboard and the parmesan in the fridge are lonely. Poor things. But ah, life goes on, and the asters and even some anemones are loving the weather. 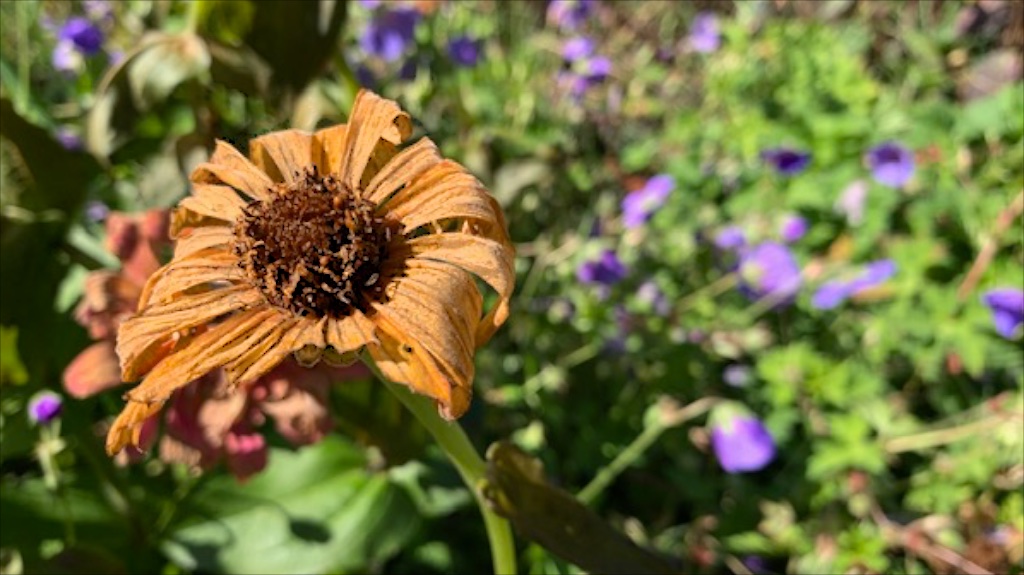 I’m soaking up all the color that my eyes can manage before the world turns brown and grey. This Mandevilla looks a little frost bitten, but is still full of color. I’m going to bring some in and see how they do over the winter. 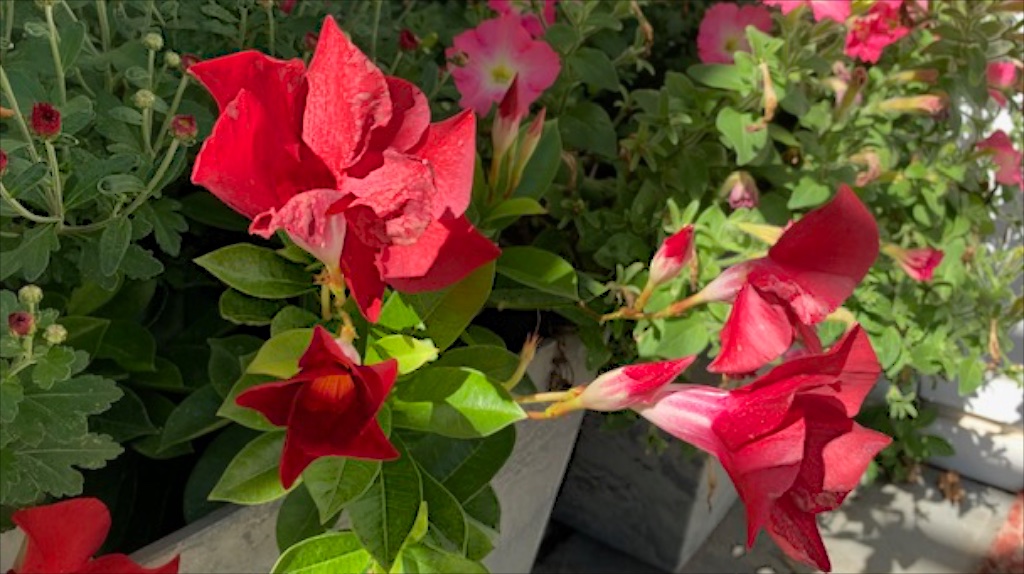 The Coleus is not so happy, which is another way of saying it’s dead as a door nail. I’ll be putting my rooster plant holders into the barn this afternoon. Sorry to see them go. 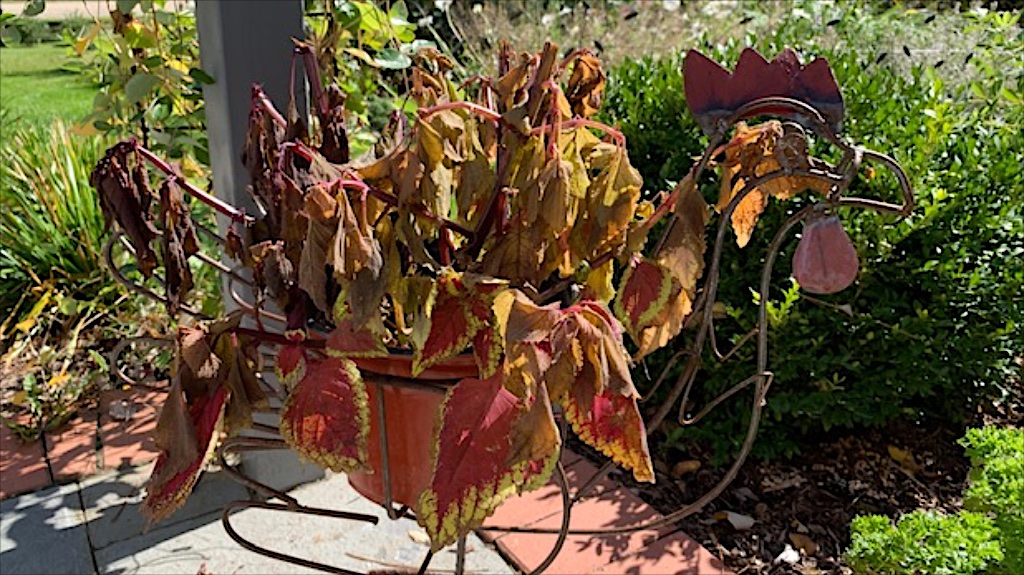 In the dog world, here are Skip and Maggie competing in this year’s “Best in Alternate Ear Poses” contest: 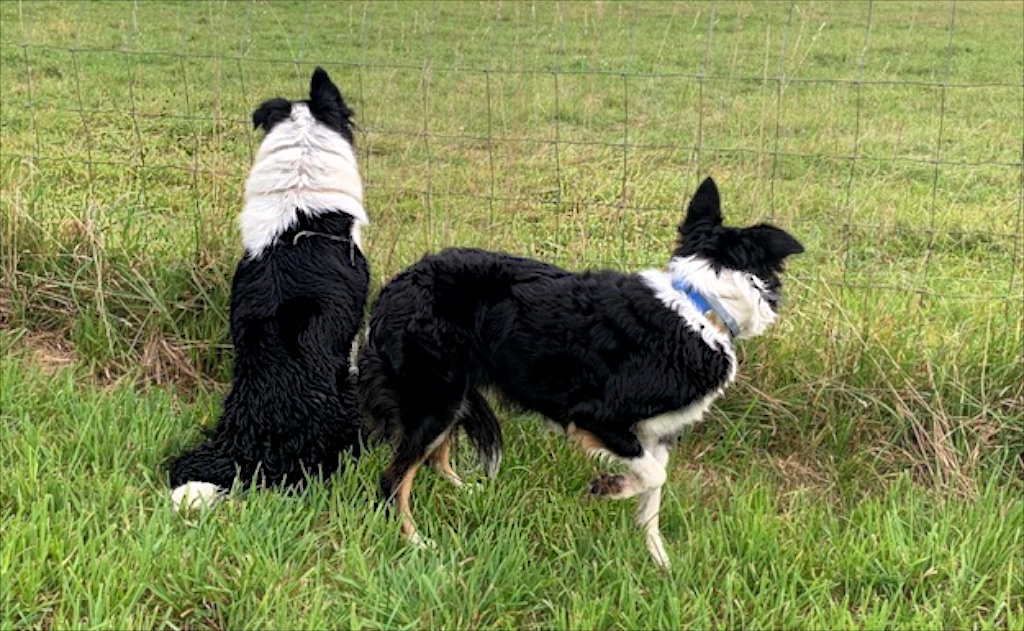 And finally, from Skip: “Have you seen the cat? I know she’s out here somewhere. Somewhere close by, I’m sure of it.” 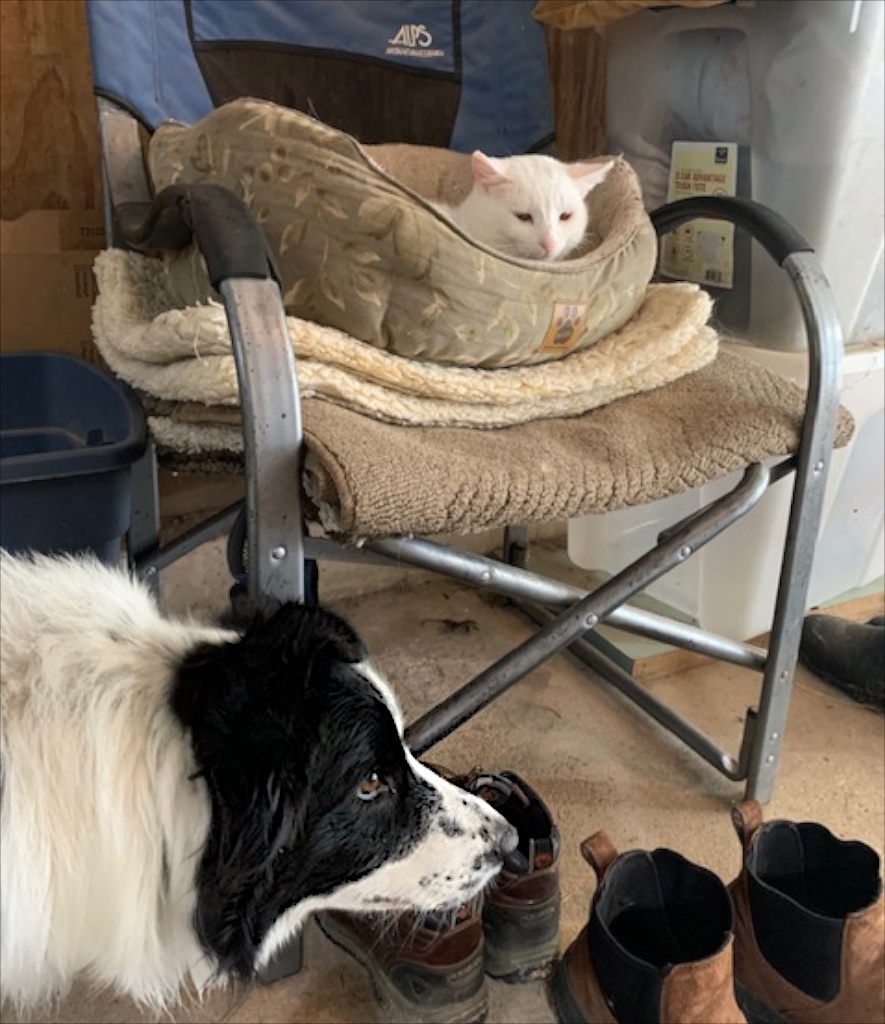 May we all find what we are looking for this week.

« Fall Fun
Maggie! Chester! Princess! (Now That We Have Your Attention, Please Read Our Minds) »