Welcome to an ongoing inquiry about the behavior of people and dogs.
Blog Home >> Animals and the People Who Love Them >> Do Dogs Distinguish Between “Training” and “Work”?

From August 2008: So I’m working Will, my young Border Collie, asking him to push the lambs into a corner so that I could catch and treat a sick one. (Lambs get diarrhea just like people and dogs do, I suspect it feels just as bad for them as it does for the rest of us. Poor little guy looked miserable.) Willie is doing really well at this kind of task, even though he can be the kind of dog who is “sticky” and won’t push the sheep forward when it’s needed sometimes. But he seems to love real work, when the sheep really have to get into the truck, or the lambs have to be pushed into a corner so that we can catch and treat one. How do I know? Well, I don’t for sure, but his eyes seem brighter, he looks especially animated when we are done and most importantly, he is much braver when we have “real job” to do than he is when we are “training.” Don’t get me wrong, he loves to work sheep anytime, he seems to live for it, and generally he works beautifully. He’s extremely biddable, especially for a young dog, has great natural balance and perfect flanks.

But, sometimes when we are up the hill practicing his outruns or his flanks (going left or right around the sheep), he is hesitant to push the sheep forward. He’ll stop, sit down (silly looking for a working Border collie) and have to be encouraged to walk up on the sheep and get them moving. Not so when we have real work to do. He is much more apt to put pressure on the sheep, facing down a balky ewe or lunging at a lamb to force it to move away from him. Last night he came away with a fluff of wool in his mouth–a first for him in a year and a half of work. (That is not encouraged, but the lamb was not injured in any way, and I was glad to see him get a little pushy at this age. He’ll learn finesse soon enough, right now he needs to learn to take charge when he needs to.)

So here’s the question: is Willie braver, more willing to take charge when we have real work to do because he understands that the exercise has a goal, or because I change and relax my standards, and am focused on the goal myself, rather than on Willie doing it perfectly? It’s hard to say. I’m a pretty benevolent handler, I rarely raise my voice (don’t have to) and have never touched him except to pet him, but I am nothing close to perfect and I know my voice can change if I get frustrated. So is his change in behavior because of mine? Or because he knows we have a job to do, and he is as goal oriented as I am? My guess is that it’s a little of both. It’s always seemed to me that Border collies know when they are being ‘schooled’ versus when you have a real job to do. I’d love to hear other thoughts on that… from BC folks or from those who work dogs in other functional jobs…

Scottish handlers have always told me that what a dog really needs is to do real work as much as possible.  Will and I have the usual problem, common in the states, of a small flock (24 at the moment) and a small farm (14 acres), and a limited amount of work. Someday maybe I can retire and get more sheep, and Will and I can herd to our heart’s content.

MEANWHILE, back on the farm (and back to real time): Well, I haven’t retired yet, but Willie’s sheep work just raised the question about “work” versus “practice” again. Willie still can be a tad hesitant in some contexts, although he hasn’t sat down in years (and I forgot he ever did that). This weekend at a friend’s house did a perfect outrun when the “easy” direction around the sheep, but hesitated a bit as he approached the sheep from the other direction. He sped up when asked, and handled the sheep well after that, but he did make it harder on himself than it needed to be. But, we were just “playing.” Willie knew full well that there was no need for the sheep to move from point A to point B (in part because as soon as he brought them we’d drive them right back).

Contrast that with his work a few days earlier when I needed his help sorting out the lambs who got grain from the others who didn’t. Jim built me a lovely sorting chute (with the help of friend Matt–thank you Matt!), but I made a mistake and messed up the sorting. That meant I had to push the lambs back through the chute, when normally they’d go though just once and then get their grain.  This time the lambs balked, and like adolescent lambs everywhere, seemed oblivious to the stalking posture of a working Border Collie. One of them walked straight up to Willie and challenged him from just inches away. In previous years, as a youngster, Willie would have “blown up” and charged forward, or darted away in fear. (To the surprise of many, lambs are actually much harder for dogs to work than ewes). This time he stayed still, met the lamb’s stare head on, and refused to give ground. Finally the lamb turned his head and walked away a few feet but then turned again and challenged Willie again.

Willie, be still my heart, was about as perfect as you could ask a dog to be. He stayed calm, never gave ground, and slowly inched the lambs backward toward the chute. After we got the job done I said “That’ll Do, Will” and whooped and clapped like a cheer leader. Granted, the job were different–one an outrun and the other driving the lambs into a chute, but they are both contexts in which Willie has hesitated in the past.  I asked myself again: Do working dogs perceive completing a job as something different than practice? I would argue that they do–the context are so different, and the consequences of doing something right or wrong are too. If it doesn’t go well on a farm, you simply have to keep doing it until you are done. Sometimes this isn’t always much fun, for either the dog or the person. Once you’ve had a few long, frustrating work sessions, I guarantee you that a job well done the first time is highly reinforcing. At least for us. Dogs too?

We seem to be having an ice storm at the moment; my car was covered in ice after I drove back on slippery roads from the office to the farm. I’m going to post this before I lose all internet connection due to a frosty satellite dish.

Here’s Maggie after a snow frolic: 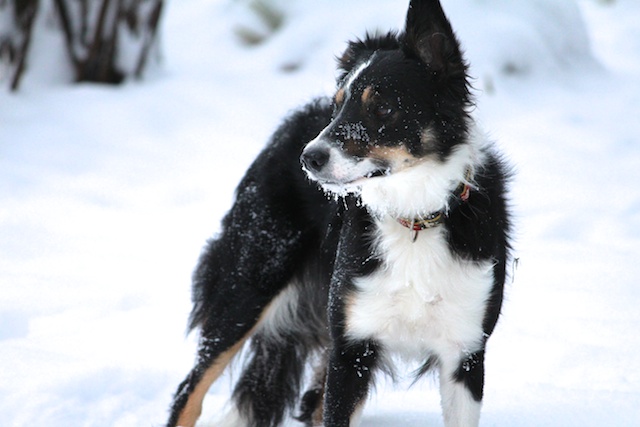 And here are Pink and Spot watching Willie and I through a window in the barn. Nice work framing up a shot, girls! 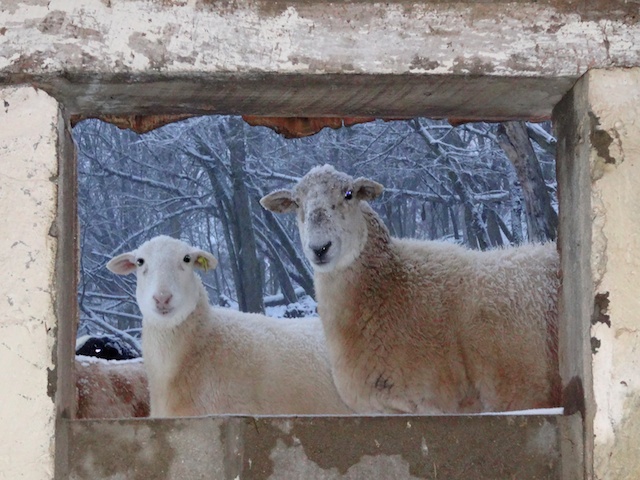