Welcome to an ongoing inquiry about the behavior of people and dogs.
Blog Home >> Animals and the People Who Love Them >> Do Dogs Imitate? [And see you in Milwaukee?]

The ability to imitate came up on an earlier post, and jump-started an interesting conversation about whether dogs are able to imitate others. I mentioned that it’s controversial in science whether non-human animals can imitate others, and promised to get back to the issue. It’s worth a half-day seminar unto itself, (and I’ll mention at APDT in October when I introduce the Cognition Symposium) but I thought it’d be fun to delve into the issue a bit here.

We should start our inquiry  by defining “imitation.” Of course, that itself is controversial! Some argue that imitation is any example of “observational learning,” while others insist it’s not true imitation unless the action imitated is a ‘novel’ one not normally done by the species. This, of course, limits the definition and makes it harder to find in non-human animals, and also brings up the question of what is “novel.”

No matter how it is defined, imitation is actually an advanced cognitive act. We think little of it (he’s just “aping you”) because we as a species are so good at it, but it’s actually an impressive behavior to pull off. It requires that an individual not only observes another’s behavior, but is able to translate that behavior mentally into his or her own action and then replicate it: Just watching someone pick up a pencil requires that your brain is able to link his arm with your arm, and that’s not something that comes easily to many animals. There’s a great clip I show in my UW class of Allen Alda doing a science special in which he interviews a researcher named Tomasello who compares the behavior of young children with that of orangutans when given a chance to replicate Alda’s behavior. The subjects watch Allen use a rake to pull food out of a box. The rake can or can not pull the food out, depending on whether it’s up or down. The kids watch Allen do it, and quickly learn to turn the rake over if they need to, but the orangs don’t seem to pay any attention to how he gets the food out. This could be an example of our species’ predisposition to watch and imitate the behavior of others and the orangutans lack of inclination to do so.

However, he too cautions about ascribing true imitation in cases in which it superficially  looks like imitation, but isn’t really. Example: a kitten watches its mother use a litter box, then walks into the box, scratches and eliminates. Wow! Imitating its mom, right? Nope… that’s a perfect example of what’s called “Local Enhancement.” The kitten is indeed affected by  its mother’s behavior, and is attracted to the litter box. She walks into it because she saw  her mother in it. However, once inside, the scratching and eliminating isn’t imitation, it’s an instinctive reaction to litter and needing to eliminate. We all know you can take most kittens, put them in a litter box and they’ll use it as if they’d been clicker trained to do so, right? A lot of what looks like imitation is actually this: an animals will watch another open a box, be attracted to the box, but have to learn for herself how to open it.

There’s LOTS more to this topic! I’ll write about the mechanisms of imitation next (mirror neurons and more), but for now I’ll direct you to some of the work of Adam Miklosi, an Ethologist in Hungary, who showed a fascinating video of a Tervuren (I first said GSD but found the article and discovered my mistake) trained a cue that meant “do what I do” at a seminar in Germany. Anyone else seen it? It’s fantastic.

And of course,  how could I not ask you? Send in your examples of what looks like imitation (in any species), but there’s more: write out your example and then put on your science hat. Is there another possible explanation?  If so, it doesn’t mean it isn’t imitation, or that dogs can’t imitate, but it is good to be open minded, yes? Considering alternative hypothesis will make for an especially interesting conversation.

See you in Milwaukee? I’ll be driving a few hours east to do a fund raiser for Wisconsin Human Society this Thursday night (24th) at the Raddisson Hotel in Milwaukee. I’m going to talk about Play, raise pots of money for a great progressive shelter and sign books and hopefully… get to meet some of you who read the blog. They may be sold out, but check it out if you can come and please come up and say hi if you are a blog reader. I love meeting you in person, it’s a lovely kind of reinforcement for writing.

MEANWHILE, back on the farm: The lambs are huge! They are growing like weeds. Well, like lambs I guess, who are getting their fill of sweet, protein filled grass and forbs (sheep LOVE dandelions.. so do I, I pick the leaves and cook them for my dogs) and a small supplement of corn/oats and a protein balancer pellet. They don’t get much because they are getting such great grass and they are still getting milk from their mommas, but I like to give them a little extra.) Here are Dorothy’s lambs, getting large enough to lift her up if they shove their noses into her hard enough (which they do on a regular basis.) 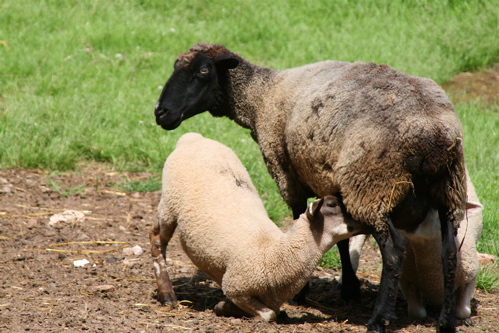 The last few nights have been dramatic. Tornado warnings, wind damage, torrential rain. Rain Rain Rain. Enough already! But the sky sure was beautiful last night, as the clouds began to roll in for the next storm. 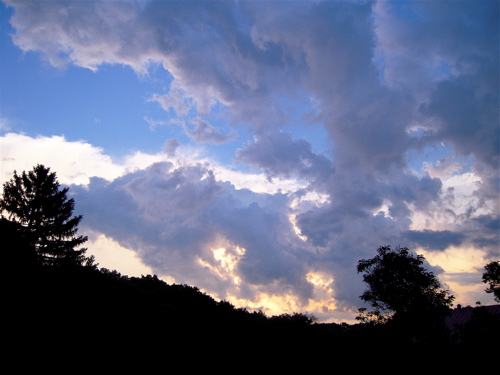