Welcome to an ongoing inquiry about the behavior of people and dogs.
Blog Home >> Animals >> Do Dogs “know” how long we’ve been gone?

How many times have you heard that “dogs have no sense of time”? I’ve heard it and read it over and over and over again, and always wondered why anyone thought they knew it to be true. Or not. How would we know? I’ve been asked this question often, and always answered I simply didn’t know, but that it seemed reasonable that they had some sense of time, even if it wasn’t exactly like ours. So yeah for researchers Therese Rehn and Lindsay Keeling for doing a study, published in Applied Animal Behavior Science, that attempts to answer that question. (“The Effect of time left alone at home on dog welfare,” Vol 129, 2011) In brief, they recorded the behavior of dogs left by their owners for 30 min, 2 hours and 4 hours, and found that if the dogs had been left alone for 2 or 4 hours they greeted their owners with more ‘intensity,’ and were more active and attentive, than when the duration of separation had only been 30 minutes. However, there was no statistical significance between the dogs behavior if left alone for 2 or 4 hours.

There are many ways to interpret that, but one is that the dogs perceived a separation of 2-4 hours as not being particularly different, but very much different from a 30 minute separation. For what it’s worth, my observations, which are just anecdotes, are that Willie’s greeting behavior varies tremendously based on how long we have been away. When we returned from  New Zealand, after being gone for 3 weeks, he ran between Jim and I, whining endearingly, flipping in circles, licking our faces raw . . . a very, much more intense greeting than if one of us had been gone for a day or two.

What do you think? Granted, none of us are doing research, but I’m still curious about your observations. Do you observe that your dog greets you differently when you’ve been gone longer? And, of course, here’s the kicker: If they do, how much of it is a response to a difference in our behavior?

MEANWHILE, back on the farm. Poor Willie is still on leash restriction. I gave him a bit of freedom the day of our vet visit (Wednesday), and he was soooo happy to be free. He lept and spun and shiney-eyed his way from the barn back to the house. And sure enough, his limp came back. But not in the vet’s office. For that 45 minutes he looked as sound as a dog could be. I actually had to have one of those “Really, honest, doc, he was limping this morning….” discussions. His radiographs showed no signs of any kind of OCD or a torn Biceptal tendon, and there were vague indications of maybe, maybe (maybe?) a torn Supraspinatus, but not likely. (By the way, this is not your general practice vet, it’s an orthopedist specialist who has been a great resource for me and many of my friends.) The vet recommends anti-inflammatories, PT for 3 months and then re-evaluating. I’m still considering more testing, MRI, etc, but will meet with the PT first.

Luckily, I got an appointment with a fantastic physical therapist at UW Vet School on Monday. I’m so curious what she says, can barely wait til then. This weekend (vet’s instructions) I’m going to give Willie a bit more freedom to give the PT a better sense of what is going on … walking a fine line not to set him back, but giving her enough information to figure out what is going on. Meanwhile, I’ll continue his exercises, anti-inflam meds, chinese meds, fish oil and glucosamine/chondroitin.

Tomorrow we should have a great time. Students from the UW small ruminant club are coming out to learn how to do ultrasound pregnancy checks on my flock. The shearer is coming too, so we’ll be in the barn all morning, then back to the house to eat chili and summer berry pie. The pies are in the oven right now, better go check them before I burn them!

Here’s Willie and Sushi, hanging out in the living room with Jim tonight, waiting for me to stop writing and come to bed! 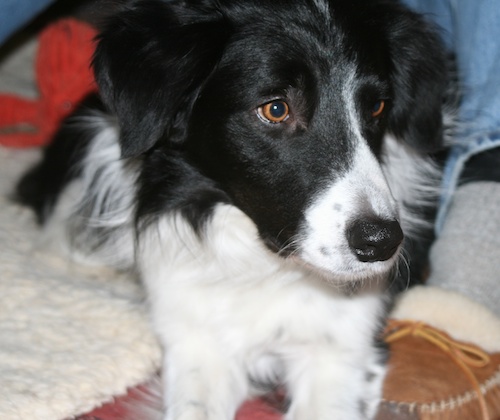 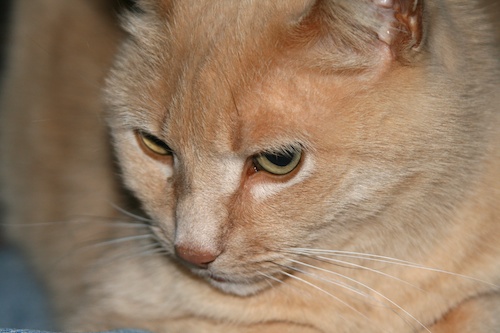