Welcome to an ongoing inquiry about the behavior of people and dogs.
Blog Home >> Animals and the People Who Love Them >> Do Privileges Affect Behavior?

In my last post I mentioned that Skip was being given couch privileges, but he didn’t feel quite comfortable up there when first allowed. Here’s the photo I took several weeks ago: 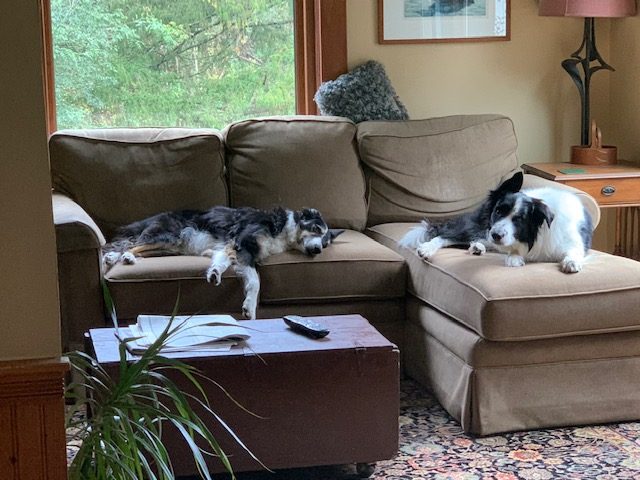 It’s pretty clear who was the most comfortable. This photograph, along with a post on my Facebook page, led to some comments about when dogs are allowed “privileges” like access to the couch, and when they aren’t. At the risk of resuming a conversation everyone else is done with, I’ve found myself thinking about the issues of “privilege,” “fairness,” and whether getting to sleep up on a couch might influence the relationships between household dogs.

First, let me tackle some thoughts I have on the concept of giving dogs PRIVILEGES in the house (or whatever you want to call them–that in itself is an interesting issue). As I mentioned earlier, Skip was not allowed on the couch at first because he plays so rough with Maggie that I wanted her to have a “safe place” to go in the living room. Skip may be sweet and funny and adorable and loving, but he’s also pushy. His primary movement in play is a hip slam, and he was so rough that there were times Maggie was simply afraid to play with him even outside. (I should write out his behavior as Hip SLAM!!, but with “slam” in a larger font.) He certainly never hip slammed me, but early on he was happy to run into me to charge out a door. He’s a big, strong dog who is physically fearless, and if ever there was an individual who “threw his weight around,” it was Skip.

Skip had never been in a house when we got him, so at first he spent his time in his crate or closely monitored in one room. Skip learned quickly that he got lots of petting if he lay down on the floor beside the couch, and never even tried to get up. Once he was house trained, we left him downstairs at night while Maggie came up to the bedroom with us. Skip is such a presence that I wanted Maggie to feel like she still had her special time with us in the bedroom at night. Eventually, we put down a blanket and I encouraged Skip to sleep on the couch at night when we were upstairs. He said “Yes, please,” without hesitation.

And now, now that Maggie is holding her own playing vigorous tug games with Skip outside–where she can drag him around across the grass as if he weighed nothing–we are letting Skip up on the couch during the day. And he’s getting very happy with it: 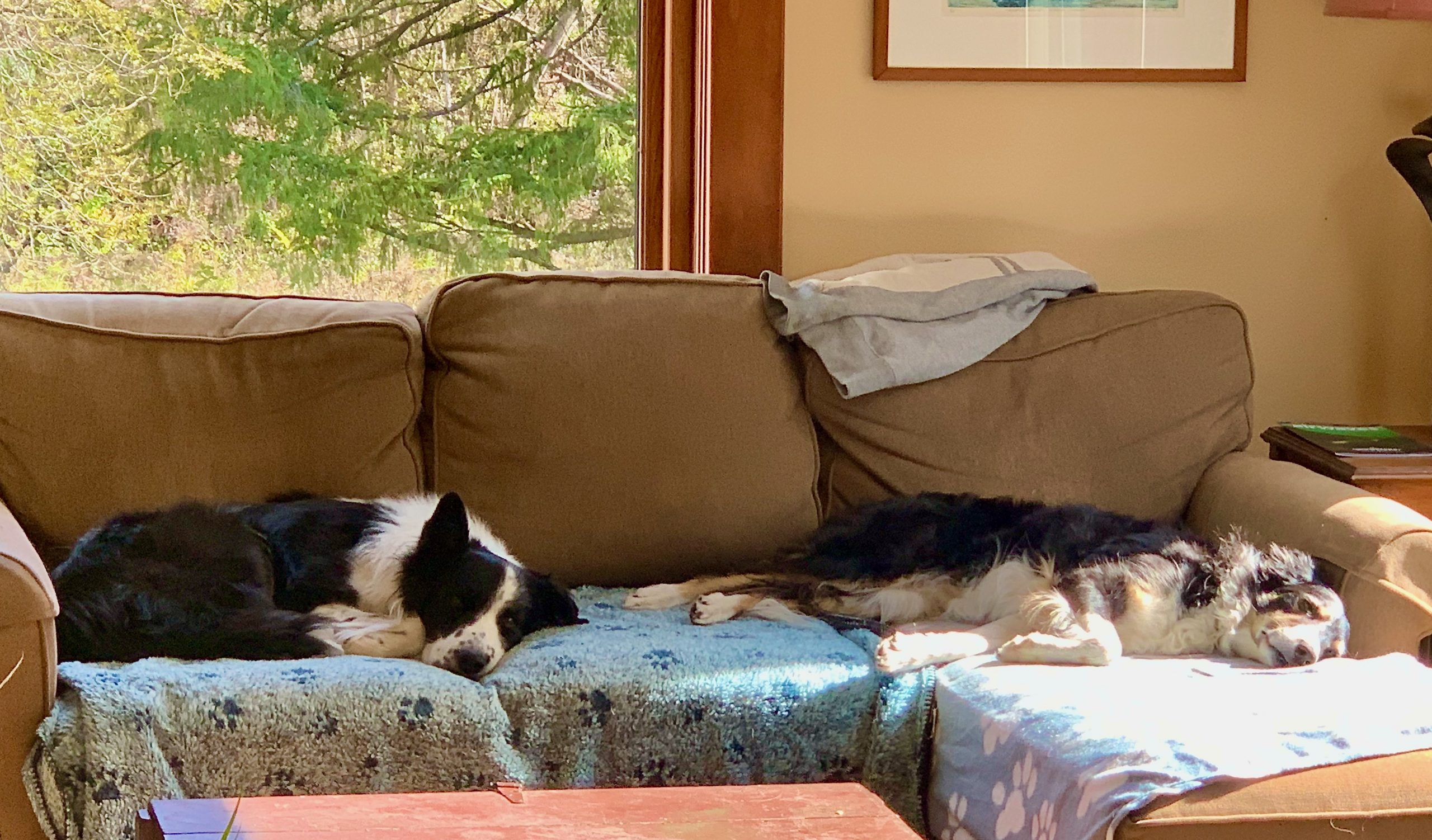 Was it FAIR to let Maggie on the couch when Skip couldn’t come up? I saw that a lot in the Facebook comments, that I wasn’t being fair to Skip. I have several answers to that, including what Karen London and I wrote in Feeling Outnumbered: “Life is Not Always Fair and That’s Okay.” I’m the first to argue that dogs can be jealous, but that doesn’t mean that they need to be treated with exact equality. Every dog is different, and needs to be handled differently. Skip has learned to sit before I open the door to go outside, because otherwise he’d knock me over. I don’t care if Maggie sits or not, because she’s never once run into me. But Maggie has to Stand/Stay when I open her crate in the car, because otherwise she’ll bolt out of the crate and could get herself hurt. I never say a word to Skip, because he walks out of his crate and stands still for me to attach a leash to his collar.

In the booklet, Dr. London and I speculate that dogs “don’t expect life to be fair all the time.” Which leads me to ponder the definition of “fair” and how we use it in relation to our dogs. So… to you. Do we need to be “fair” to our dogs?

Lastly, and I’m burying the lead here, because this is what I’ve been thinking about all week, whether having privileges affects a dog’s behavior. Does getting up on the couch make a dog more likely to pull rank on another? This, of course, brings up the “D” word, which is dealt with well in a 2021 Washington Post article by Jacob Brogan. The summary, based on interviews with a variety of behaviorists, trainers and researchers, is that social status is indeed relevant in some or many dog-dog interactions, but not so between dogs and people. This is where the couch comes in–a highly-prized resource, which is also higher in vertical space than being down on the floor.

My question on this to you then, is this: What have you seen in your dog that might relate to a dog getting privileges, especially couch access, that has, or has not, changed the relationship between dogs in your household? Here’s one observation from my house to get us started: A few nights ago Skip jumped up on the couch, for the first time ever, during the time when Maggie and I do our most cuddly cuddling. She sprawls on her back over my lap and I rub her belly for, well, a long time, because it feels as good to me as it does to her. But this time, Skip leaned in, trying to get pets himself. After pushing into Maggie for awhile, he lay down as I quietly asked him to do. The next time we took the dogs out to play, Maggie played tug with Skip like Gal Gadot in an action movie. I’ve never seen her so assertive. She growled so deep and loud that for the first time in her almost nine year-old life I wondered if I should intervene before things got out of hand. Skip loved it, however, although he eventually tired out and lay down in the grass and let her drag him around like a rag doll. Was Maggie’s extreme play behavior the result of his horning in on her special massage time? I honestly have no idea; but it was an interesting correlation of events. I’d love to hear your thoughts.

MEANWHILE, back on the farm: First, may I just say that anyone who thinks setting the clocks back gives you an extra hour of sleep does not have dogs?

This past weekend was the last big trial of the season, and Skip and I seem to be in a habit of doing poorly in our first run and well in the second. On Friday we got a group of sheep so far beyond our skill set that we didn’t have a chance. Four sheep, with a runner in the front (aka “I’m a deer, I’m a deer!”) and two hay bales in the back whose only interest was standing still and grazing. If you tried to keep the back two moving you lost the sprinter in the front. Skip got too wide like he does when he’s worried, and I couldn’t figure out who to focus on, so we ended up with letters rather than a number score.

Day two gifted us with a reasonable set of sheep, and Skip was at his best. He stopped a tad short on his outrun, but we nailed the fetch line and drive until I got boggled up on the second drive panel. (It’s hard for us less experienced mortals to find the straight line between two sets of gates that are a long way away and horizontal in front of you.) But we got a great line from there to the pen, and had the sheep walking in when we ran out of time. That meant we didn’t have much of a score (lost 10 points on the pen), but I was happy with his run. He did everything I asked, committed to controlling the sheep, and looked happy afterward. Maggie got to work too, helping move the sheep from each run into the rest area, so a good time was had by all. It was windy and cold on Friday so we were all parka-ed up, but much nicer on Saturday and lovely to see some good friends.

No video of our runs this time, but I did get a few photos on Saturday. Here’s an enthusiastic spectator, the Border Collie Loam, the dog of our trial host John Wentz, hanging out in the judge’s truck and watching the runs with equal intensity. 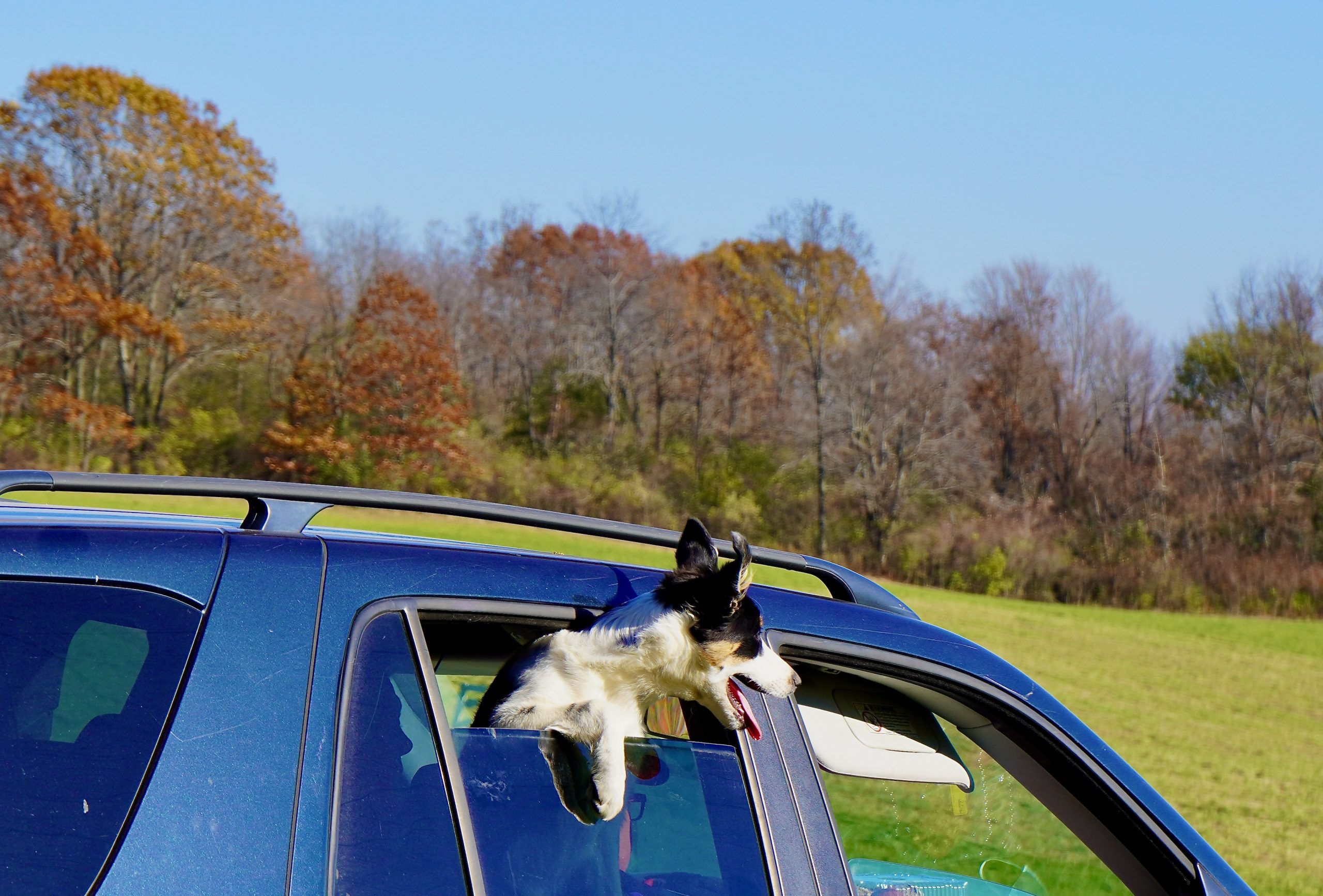 I couldn’t resist snapping a portrait of this lovely dog, owned by Mike Guros: 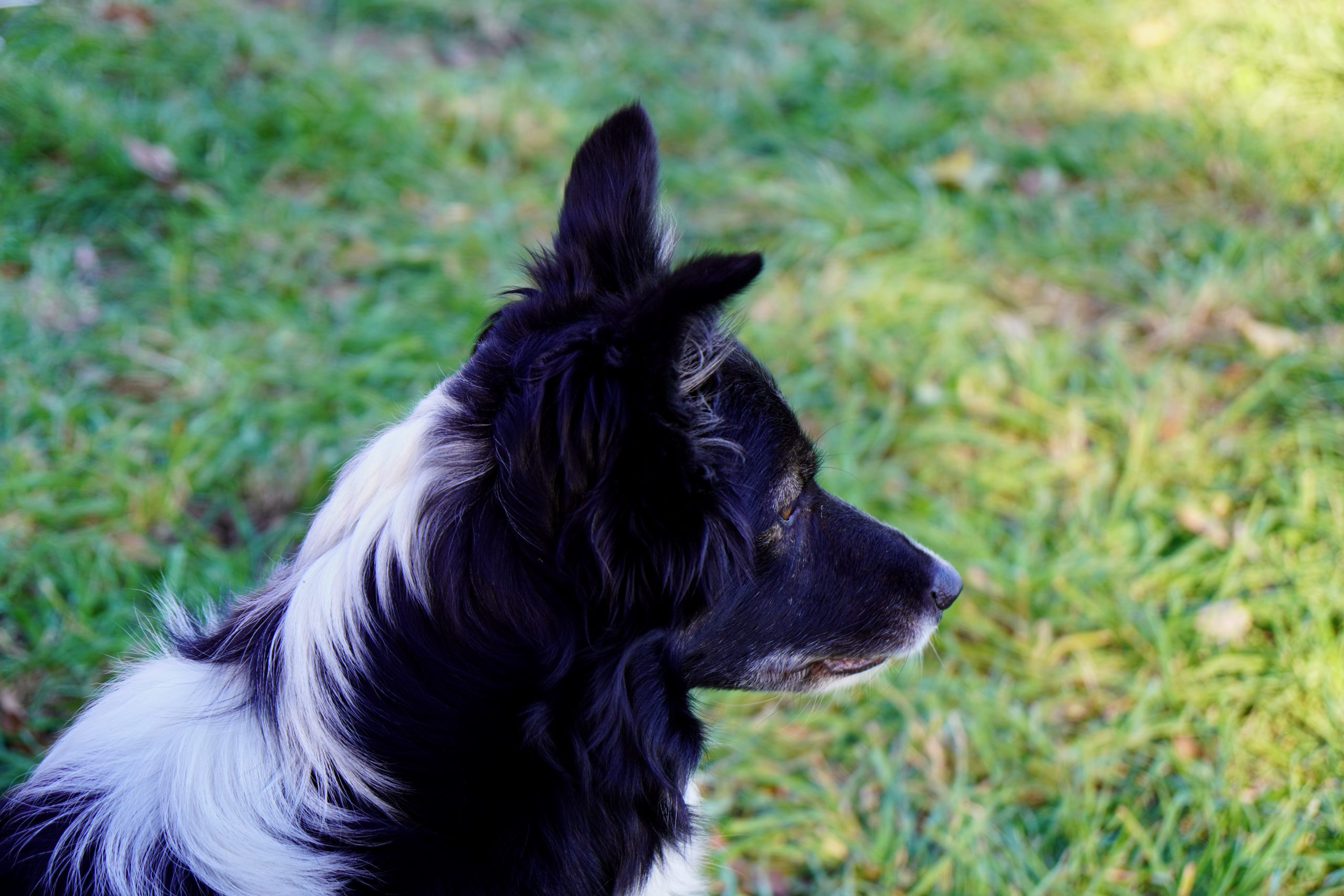 These lovely maple leaves are all gone now, but lit up our yard a few weeks ago. 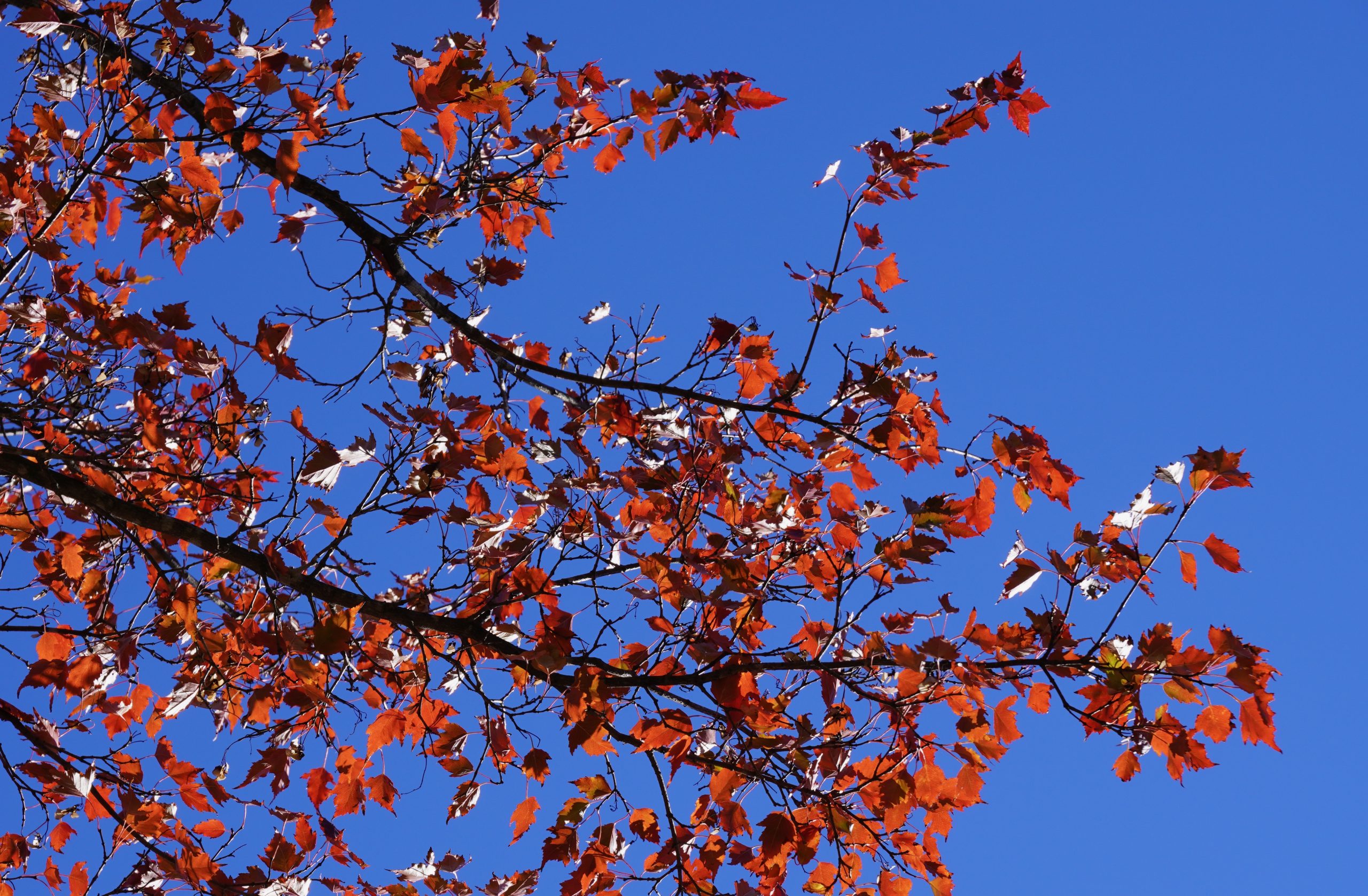 The flock is pretty happy; they get yummy alfalfa hay in the morning and there’s still some fresh grass to graze on. I don’t know if they’ve enjoyed the beautiful skies and clouds like I have, but I hope so. 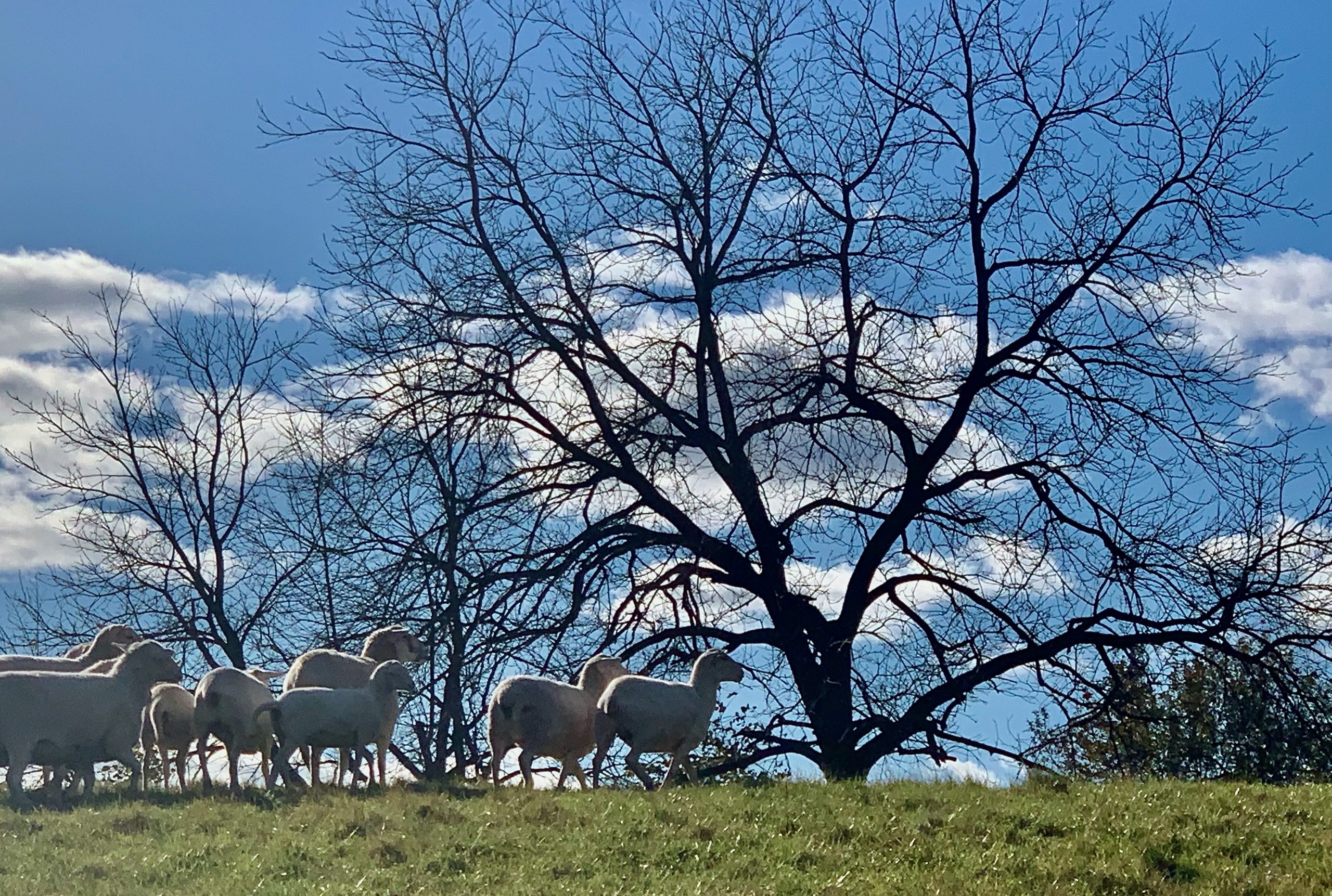 May there be blue skies in your neck of the woods (or cloudy ones if you need rain). Chime in about privileges and what dogs make of them; I’m so curious what you have to say.