Ah, who doesn’t love a good bed? Anyone who has traveled knows the value (and rarity) of finding, Three Bears style, just the right bed. It appears that our dogs share the joy of a perfect sleeping place, and I thought it would be a useful discussion to ask all of you what your dogs like best.

I won’t suggest that I have any “perfect” answers. First off, there is no such thing, because surely dogs vary as much as people in what they like best. I remember once, while traveling for a sheep dog trial, putting a blanket I’d brought onto the bed and gleefully asking my dogs to jump up and sleep with me. They didn’t get to do that at home and I assumed that both Luke and Lassie would be thrilled. (Okay, I was probably most excited of all of us.) Both dogs lept up onto the bed enthusiastically. Luke licked my face, padded around awhile, lay down, got up, lay down, got up (rinse and repeat)…  and then finally jumped off. Lassie curled up in a ball by my hips and never moved the entire night. If she could talk I’d imagine she would have said: “It’s about time I was allowed to sleep where I’m supposed to sleep.”

Lassie loved soft and warm. Luke, I suspect, was too hot. At present, I don’t let Willie on the bed at night, primarily because of my asthma and partially because I think he’d keep me awake a lot. Tootsie comes up in the morning for cuddles after she is done with her Kong, but both her and Willie sleep in their own dog beds in the bedroom. Tootsie loves her cozy “circle bed” when it’s cold; she curls up like an arctic fox and covers her nose with her tail. Pretty darn cute. When it’s warmer she sleeps on a ‘faux’ lamb’s wool pad or the dog bed mentioned below. Willie mostly sleeps in an old, well-worn “do-nut” like bed with pillows on the outside of a circle and a separate pad in the middle, but he too varies where he sleeps.

However, a neighbor just happens to be in the dog bed business (lucky me!) and kindly brought over some beds for my dogs to try. Her company is Dawg Tired, which makes high-end dog beds with quality materials and easily cleanable surfaces. The beds are basically stuffed pads with great covers, with no “pillows” for a dog to rest its head, but I have to say that it’s common for me to look over and see Willie, Tootsie or Sushi the cat curled up on it. Sushi isn’t allowed in the bedroom because of my allergies (it’s tough on all of us), but if I forget and leave the door open, I can pretty well guarantee she’ll be curled up on the Dawg Tired bed. It has developed what must be a comfy depression in the middle, which appears to be “one size fits all.”

As much as they love the Dawg Tired pillow, most of my dogs often seem to enjoy having a “pillow” for their heads, so I’m pleased that Dawg Tired is coming up with beds that fit that description soon. LL Bean has some nice versions that they call Dog Couches, I like the looks of these too.

Here’s what we have in the house now:

Here’s Tootsie on one of the Dawg Tired beds. The beds have one side in fleece and the other side in a super hardy, water proof waxed-cotton or heavy duty denim. All the animals seem to like it a lot, but I have to say that Sushi would probably fight for it if she was given a chance. 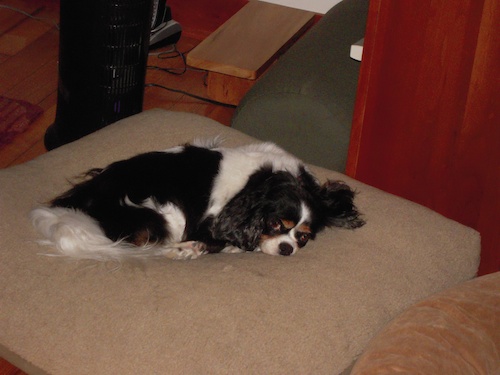 Also in the house: a gazillion faux lambskin fleece pads in a variety of sizes. They are all over the place: in crates when it’s cold outside, on the rug for a soft surface for the dogs (and me) to rest. I love them because they are washable, long-lasting and come in a variety of sizes. I’m not sure what I would do without them. The ones I use are by Comfort Zone, called  “Polyester blend lambskin, Double pads — Fleece” on the labels.

Here’s Tootsie on one in her sleeping crate in the bedroom. I never close the door to this crate anymore, she can sleep wherever she wants in the bedroom at night. She chooses to go in it often however, so haven’t taken it down yet. 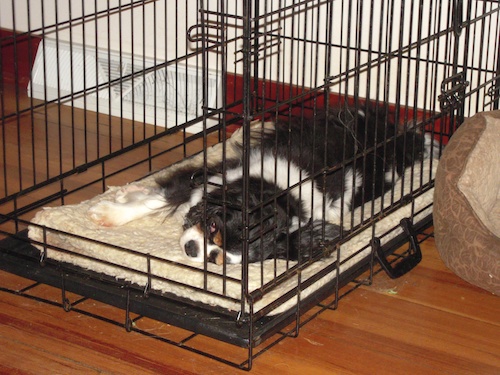 A non-fleece pad, also made by Comfort Zone, that is much cooler for hot weather, but comfortably padded. It’s surface is  Water Repellent and super easy to clean. I have this in Willie’s crate right now and we both love it. It’s called “Pet-o-Ped” on the label. I don’t have a photo, but picture a simple pad covered in an easily cleanable blue fabric. I can’t imagine going without these anymore either.

A large circular “couch” for Willie that he loves to sleep in, especially when it’s cool outside. He often rests his head on the “pillow” part. Apologies to readers and the manufacturer: it was made by a small local company and I’ve lost track of them. It’s getting a bit, uh, old, and I might replace it with another “couch” soon. Tootsie also has 2 Cav size couches, which she also adores, just as much as Wilie. One is in the living room, and she uses when she decides she doesn’t want to share my attention with Willie while we watch TV together (well, I watch, they mug for petting). She’ll stand on my chest and lick my face, settle in by my shoulder for a long round of belly rubs and then move to her couch while I continue petting Willie on the other side.

Here’s Willie last night in his. This version comes in two pieces, a circular part with a ‘pillow’ on the outside with a removable, washable cover, and a center pad that is harder to clean but admiringly hardy. 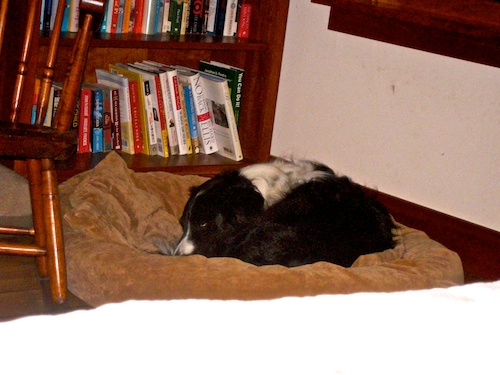 Tootsie’s Circle Couch: That’s not a product name, just the way I describe her favorite beds when it is cold outside. They are perfect for coiling up in a circle, covering one’s nose with one’s tail and settling in for a winter’s nap. It was pretty hot when I took this, so she’s sprawled out a bit. 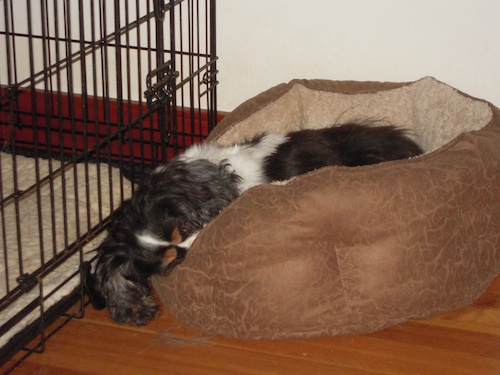 Katie Martz’s Dogo, Lily, loves her Cozy Cave like life itself. As a thin-skinned Dogo, she especially loves being warm, so Katie says she’s in this even when it’s toasty outside. I’m inspired to get one for my dogs, it looks so cozy. Do they make one for people? 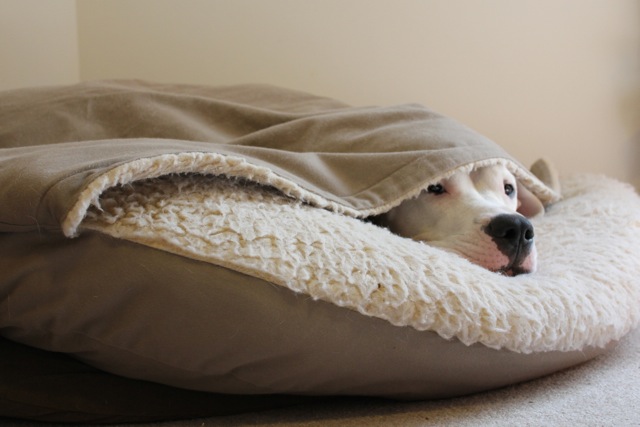 Then there are beds, with special “egg carton” surfaces, or elevated ones like the Coolaroo Elevated Pet Bed. These types of beds are often argued to be good for dogs with orthopedic problems: . It’s very popular on Amazon, with 558 5 star, ratings. I’ve never had one, anyone comments?

West Paw in another very popular brand in the States, although the Organic Bumper Bed does have a few complaints about the filling not lasting very long. I got one for Tootsie but she wasn’t a fan, didn’t seem to like getting in and out.

What about you? I know, some of us would call our dogs spoiled because we buy them their own sleeping pads, but hey… they deserve it. I’d love to hear about your favorites.

Certainly, as always, we must remember that every dog is different: I remember Bess, one of my first Border Collies, furiously digging out the soft straw I had put into her kennel on cold nights to keep her warm. I had seven dogs then and a husband who insisted on a “two dogs in the house at night rule.” (In his defense, by the time we got divorced I think there were 4 or 5 dogs in the house.)  Bess hated the straw I kept adding for warmth and softness, but it took me a couple of days to accept that she wanted to sleep on cold, hard wood. To each his or her own!

MEANWHILE, back on the farm: Yup, that’s where I am. In heaven, still kicking back and getting refreshed for lots of wonderful things to come this summer and fall. I’ll be back at work next week, looking forward to launching our all-new website. Oh boy Oh boy.