Welcome to an ongoing inquiry about the behavior of people and dogs.
Blog Home >> Dog Behavior >> Dog-Dog “Aggression” Seminar in Des Moines

Here’s the post I thought I’d lost! (Will my viral-hazed brain ever come back to normal?)

Hey, I am back among the living. Not much energy, pretty slow in the head, but actually eating real food again (well, still can’t eat chocolate, which along with fresh spinach and warm bread is the only real food there is). Willie is back to dropping toys in my lap (even when I’m lying flat on my back on the couch, so I think it was much more than lack of movement that changed his behavior. I’ll write more in the comments under the last blog.)

I wanted to say a few words about Des Moines, and the Animal Rescue League of Iowa who sponsored it. First off, Paula Sunday and all her staff were wonderfully accommodating, even changing the plan and letting in over 200 people in by the time 9:00 rolled around Saturday morning. I asked the folks that came to say hello: 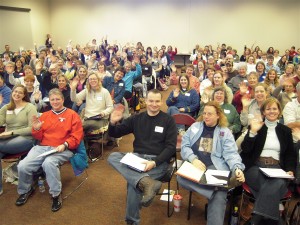 They were a great group of people, I enjoyed spending the day with them immensely.

In the morning we focused on dogs who are reactive to unfamiliar dogs (I put the word “aggression” in quotes in the title because so many dogs who look aggressive actually have no intent of harming anybody or anything, but all that barking and growling sure can look scary.) We worked with a Corgi named Vadar who had come into Angie’s home with lots of lots of “issues.” (I just love that way to describe a range of trouble! As in: “I have “issues” with computers when they don’t work right for me.”) Angie and family have done a great job with Vadar, and things are good at home but Vadar is your basic bark/lunger at dogs on the street, especially ones bigger than he is. We taught Angie and Vadar an “autowatch” in about ten minutes (it was scary, he learned it so fast) and had a great first session reinforcing him with treats when he looked at Angie as another dog approached. Here’s Angie and Vadar (and me), Vadar with his “I am the perfect dog” look on: 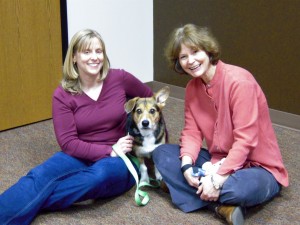 After Vadar we worked with a Golden cross named Casey who fit into the ‘reactive’ mode in that when he sees another dog that he can’t get to, he begins to spiral up into being frustrated and emotionally overloaded (at least that what it looks like to me, obviously I’m just making my best guess about his internal state, but Casey gets SO excited over SO many things and his response to other dogs seemed to be as much about arousal as anything else). Casey also did a great job with “watch” (look at your owner instead of barking at the dog) and also learned the “Emergency U-Turn” that owners can use when they get surprised by a dog who shows up unexpectedly.

Obviously, all these types of issues deserve lots and lots more time and attention than I can write about now (see the booklet Feisty Fido for more about teaching some of these techniques), and we talked about so much more than the few things I’ve mentioned here (including CAT, teaching “Where’s the Dog?” and reinforcing for looking versus looking away) BUT, here’s a wonderful email from Casey’s owner that came a few days later:

I wanted to tell you that I practiced some of the information I learned yesterday with Casey (the golden mix demo dog) and they worked! I was clicking through TV channels and the Animal Planet had some dog dancing show which he reacted to like always – running to put his face against the screen and bark at the dogs. Sometimes he is so wound up he even turns around in circles but he wasn’t doing that yesterday. I can call him away from the TV so I got him over by me and said “Do You Want a Treat?”. He gave me the quizzical, cocked-head look that he often gives when I ask him questions and followed me into the kitchen without a backward look at the TV.

I thought I would try “watch” and started in another room. It was going well so I moved closer and closer to the TV until we were about 3 feet from the TV and I even moved so my back was mostly toward the TV so Casey could hardly help but see the dogs. Except he wasn’t looking at them — he was staring at my face so intently that he would barely even glance at the dogs on TV to give me the opportunity to say “watch” – he was already watching!

I couldn’t believe what a difference happened so fast. Usually he will run from anywhere in the house to bark at the TV if he hears or sees ANYTHING from there that even remotely might be a dog or other animal. It gives me hope that it might work with other live dogs when we’re out walking. Thanks so much. Julie

Yeah, positive reinforcement, hey? Now Julie’s job is to be sure that Casey only gets the treat for looking at the dog, so that the dog itself is the precursor to the treat. (If your dog won’t stop staring, take your eyes off him or her, move around, etc.) Keep up the good work Julie!

We spent the afternoon on a too-cute-for-words Jack Russel Terrier (mostly?) who came to Sundie and her daughter Lucia with lots of problems, including serious resource guarding. They’ve solved a lot of problems by keeping up toys and treats, but every few months Buster goes after their other male, and the fights are serious. After getting a solid foundation of information, we broke into groups and brain-stormed some treatment suggestions, which included lots more mental and physical exercise and lots more training that will give them control over all the dogs, including having Buster (and family) MASTER a few essentials cues like “Enough,” “Get Back” and “Stop,” all taught with positive reinforcement as if they were circus tricks. There was lots more of course, including clear cautions that this kind of issue (there’s that word again) is difficult to completely turn around, but it was a very interesting and rewarding day. Look at the reinforcement Animal Rescue of Iowa arranged for our afternoon break: 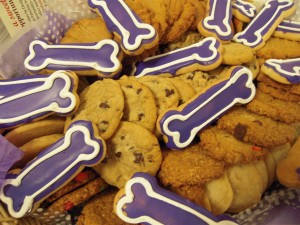 All in all, a wonderful day!