Welcome to an ongoing inquiry about the behavior of people and dogs.
Blog Home >> Animals and the People Who Love Them >> Dog is Love by Clive Wynne 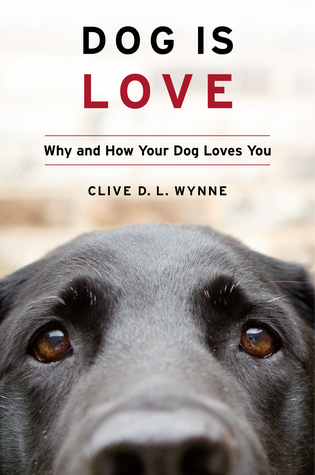 The author Clive Wynne sums up his book’s thesis in its title: Dog is Love: Why and How Your Dog Loves You. He argues, compellingly, that dogs aren’t special because of their intelligence, but because of their social bond to us, which after extensive research, he is happy to call “love”.

One might say that this is not quite as unique an argument as he suggests, but there is no better scientific explanation of our astoundingly close emotional relationship with dogs than in this book. It contains so much interesting information that I first began trying to summarize all the studies myself for you. Bad plan. Trying to rewrite his entire book in short form was probably not a good idea. What I’ll do is list a few, just to whet your appetite.

Before I do, I should mention that some of the studies are well known to many of us. For example: Belyaev’s “domesticated” foxes; Hare’s early arguments that dogs evolved to understand pointing gestures while wolves do not (it was Monique Udell, working with Wynne who disproved this); Coppinger’s hypothesis about wolves evolving into dogs through natural selection, to name a few. However, Wynne builds on these studies and many more to argue that the domestic dog’s behavior, physiology and genetics all suggest that the science doesn’t suggest, it downright demands, for us to acknowledge, that yes, dogs really do experience love, and we are the lucky recipients.

Here, then, are just a few of lesser-known studies that Wynne uses to make his case:

Dogs just really, really like to hang out with people: Mariana Bentosela found that wolves and dogs differed in how much time they spent within three feet of a seated person–familiar or unfamiliar. Wolves, who as we know can be super social and loving to familiar people, spent less time with familiar people than dogs did with unfamiliar ones. Think about that.

It is astounding, really how many dogs choose to hang with us when they could be doing so many other things. When Maggie chooses, over and over, to stay with me instead of doing the million other things she could be doing off leash and free, it makes my heart gushy.

Perhaps the most interesting research relates to the discovery that the genes of domestic dogs are similar to those of people with Williams Beuren Syndrome, which creates behavior described as “hyper social” and with “exceptional gregariousness”. (Note that many of the sites I searched focus on physical and cognitive problems, and say little about behavior, as in: “Children with Williams syndrome typically have a personality that is friendly, outgoing, and/or talkative,” from the Nat’l Organization for Rare Disorders.) However, Wynne visited a summer camp for children with the syndrome, and although he felt guilty about making the comparison, said it was like “watching a whole camp of kids pretending to be dogs”.

He even references the well-watched video, “Cat-friend vs. Dog-friend” by Craig and Parker. (The “dog friend” is hysterical, but I couldn’t help wanting to defend my super social cat Nellie while watching it.)

Remember the first study I mentioned, in which dogs hung out with unfamiliar people at high rates? That is hugely important, and key to understanding who dogs are. How many dogs treat every stranger as if they were their best friend? It’s downright bizarre if you think about it in evolutionary terms. Indeed, one of the challenges of being a parent of a WB Syndrome child is keeping them safe . . . imagine if your child believed ever single person they met was instantly their best friend.

And now we know why, thanks to the research of Bridgett vonHoldt working with Monique Udell and the author, Clive Wynne. It turns out that there are three genes (at least) related to WB Syndrome, and different variations of these genes, found in both dogs and wolves, are consistent with their levels of sociability. Crazy cool stuff, yes?

And here’s a section in the book that is sure to get your attention: Wynne argues that domestic dogs have a stronger social hierarchy than wolves. Yeah, you read that right. Don’t panic, he is vehemently opposed to the concept of training dogs based on a “dominance hierarchy,” but he cites interesting studies that show wolves and dogs growled over a bone at similar rates, but the domestic dogs were more likely to have a winner who gets the bone, and a loser who gives up entirely, while the wolves stayed put, eating and growling with no winner or loser. Read more in the book–it’s an especially thought-provoking issue.

The author concludes that we owe dogs more than we are giving them, decrying dogs left alone all day with little interaction even in the evening, substandard shelters, irresponsible breeding, etc. Overall, it’s an important addition to the field, and a great addition to our libraries.

MEANWHILE, back on the farm: Well, you gotta take your successes where you find them. We just returned from the Star of the North Stockdog Trial in Minnetrista, MN, and for the first two days it was Trial Field 2, Maggie 0. I had no idea how difficult this course was. The 500-yard outrun is one thing, but the field is a series of ridges that run horizontal between you and the sheep. The dog loses sight of the sheep at least twice during the outrun, and you lose sight of the sheep and your dog twice on the fetch. It’s a much tougher course than the one we ran on over Labor Day, and honestly I’m not sure I would have entered if I’d known how challenging it was. As another handler said “Poor Maggie! All these extra hard courses for her to deal with when she’s just started in Open.”

Here’s the (gorgeous) field, looking far less intimidating in the photo than in person. Those little ridges you see are actually quite deep, and you lose sight of your dog, and your dog loses sight of you, multiple times. This handler has sent her dog, who has disappeared on the way to his sheep, who you can see in the far distance. 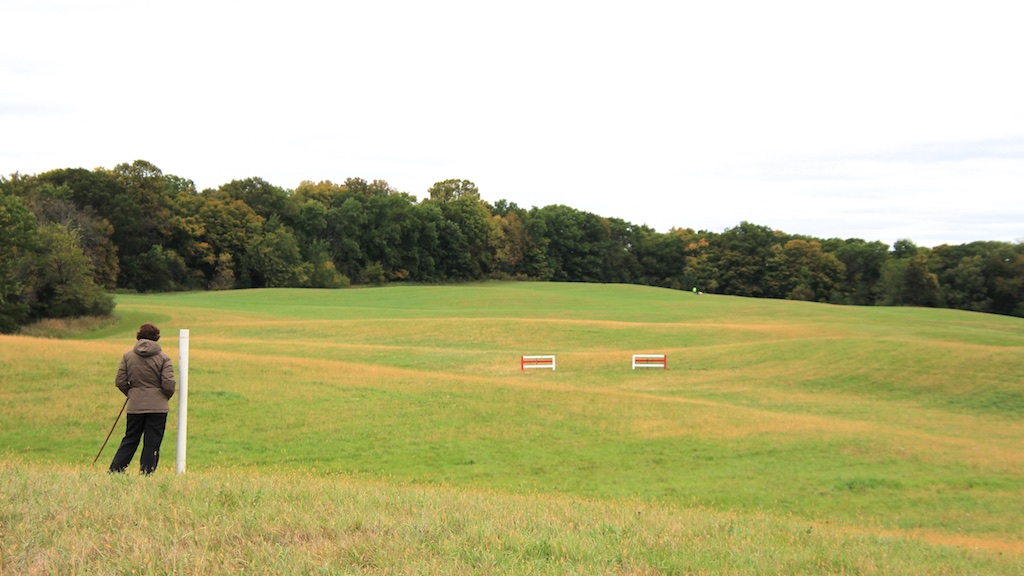 Here’s another look at the undulating course: 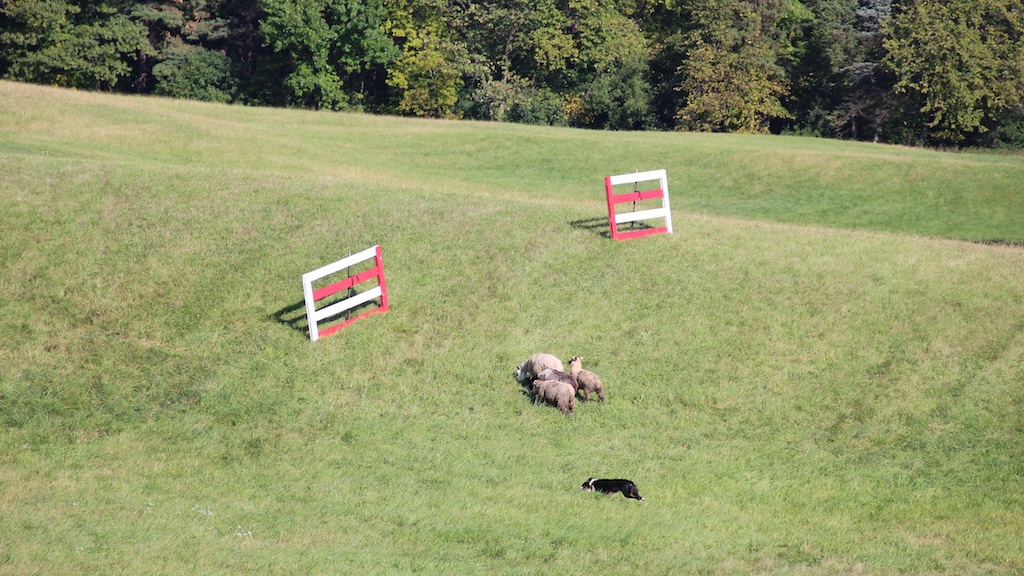 My biggest disappointment on our first runs was that, when first sent on her outrun, Maggie ran behind us to the “exhaust pen” rather than looking for sheep up the field. It’s a new bad habit she started this summer, and I think it’s all about avoidance, as in: “These sheep close by are soooo much easier to deal with than the ones forever away, I’ll just work them.” Both times I left the post and did get her going up the field. On Friday she crossed over at the bottom of a ridge (I couldn’t see her) and ended up getting stuck on the sheep in the set out pens. On Saturday she finally found the right sheep but got stuck in a dip. I waited and waited and waited, and finally walked halfway down the course (never will 250 yards seem as far as when you have to walk out onto a course to rescue your dog). I found her lying down with the sheep grazing in front of a patch of water big enough to be called a pond. I suspect she simply got into that deep dip, had no idea where I was or what to do, and just abdicated. When she saw me she easily moved them down the field.

After Saturday I considered going home, wondering if I was just going to set Maggie back by making her run one more time on Sunday on this difficult course. But I finally decided to try again on Sunday, since she’d found the sheep Saturday and perhaps had learned what to do when the world went wonky and she and the sheep descended into the Bermuda Triangle. I’m glad we stayed. After cold, misty weather on Friday, and one hell of a lot of rain on Saturday, Sunday dawned blue sky and cool, but windy. We walked to the post mid afternoon when the wind picked up, the sheep were getting cranky after three days of running, and lots of dogs were having trouble getting them to stop eating grass and play the game. I tried not to obsess–would she find the sheep on her own or try for the exhaust again? Would she and the sheep disappear again in a deep dip and require me to leave the post yet again?

Whew. Maggie left the post and ran a gorgeous, huge outrun around to the back of the sheep. She did what looked like lovely lift (granted she was a tiny dot that I could barely see). I held my breath when she and the sheep disappeared two different times on the fetch, but each time, some tiny white sheep ears appeared behind the ridge with my little dog right behind them. She did a truly lovely fetch and wrapped the sheep around me well. Alas, the hungry, crabby sheep were too much for her on the drive, and she couldn’t get them pushed around the course. One large, horned ewe basically made it clear she was done with trialing thank you very much, and Maggie didn’t know what to do except bust in on her. We got DQ’d, very reasonably, by the judge.

I couldn’t fault her much–the sheep were getting worse and worse, and lots of good, more experienced dogs were having a lot of trouble. Of course, there are plenty of dogs out there that can handle sheep like that, but right now Maggie isn’t one of them. She might never be, but I am taking our successes where I can, and I was so happy that she figured out the course, put her big girl panties on and ignored the “easy” sheep.

One more trial next weekend, the last one of the season for us. It’s another famously hard course in which the dogs have to run through a stream to gather the sheep half hidden under some lovely old oak trees, and do a “dog-leg” fetch rather than bringing the sheep directly to you. They do tend to be sheep that Maggie rather likes (flighty versus heavy), so that’s a plus in our favor. I would be so happy to get numbers instead of letters, but if Maggie and I learn something important I’ll call it a success.

Here’s hoping you had a victory of sorts yourself last week, whether minor, like ours, or major. We’d all love to hear about it.