Welcome to an ongoing inquiry about the behavior of people and dogs.
Blog Home >> Animals >> Dog Laws Around the World

One of the most enjoyable parts of doing seminars around the world is talking to people from a variety of countries about their countries’ and culture’s attitude  and regulations regarding dogs. A group of us got to talking in Edinburgh about the dog-related laws of their own countries, and what a range of regulations we found. In Sweden dogs are allowed off leash in many areas, but must be “under control.” (Very sensible!) I was told when I was in Sweden that keeping a dog in a crate was illegal–any Swedes want to confirm or deny? Sweden has very strict animal welfare laws that also apply to domestic pets. For example, all indoor animals must be able to see out a “sunny window.” This is especially interesting to me, given that I’ve advised many a client to keep their dogs AWAY from windows when they leave the house because the activity outside often overstimulates and/or frustrates them. I’d never leave Willie loose in the front room with big windows facing the driveway; when I tried it earlier he was a stressed out wreck when I came home.

Sweden has no country-wide breed related bans, but lots of European countries do. Several countries ban “Pit Bulls,” but as best I can tell no one over there knows who they are either. In the UK I was told the “breed” designation is based purely on looks, and any dog who is reported to look like a pit has to be evaluated. In Germany, some breeds (from Akbash to Staffies to Dogos) must be muzzled in public, unless they have been evaluated for safety. One of the Edinburgh participants was from Poland and she reported that all dogs over medium size must be muzzled in public. She also reported that the law wasn’t enforced and most people ignored it.

Regulations aside, in general my experience has been that Europe and the UK are much more dog friendly than the US. We ended our trip in southern England, and there were dogs, off leash, in all the parks in London. (Which has more parks than one could ever imagine! Gorgeous!) We saw dogs all over the UK, many off leash and many on leash, some in pubs and buses, both of which would never be allowed in the US. Sigh.

What about where you live? There are 16,000 readers of this blog (yeah!) and they live all over, from Alaska to Afghanistan. I’d love to hear from you, and I expect our colleagues around the world would too. How “dog friendly” is your community? What kinds of regulations are there restricting their behavior? What kinds of welfare-related laws are there? (Our animal welfare laws are insufficient here in the US, to say the least. If they were better we wouldn’t have puppy mills…..). What would you like changed?

MEANWHILE, back on the farm: I spent most of Sunday NOT cleaning the house (very much needed) or weeding the garden (also needed) but rather collecting wild apples with friend Harriet and Jim, washing and then cooking them up into what I call Apple Butter Sauce. Here’s what them process looks like: 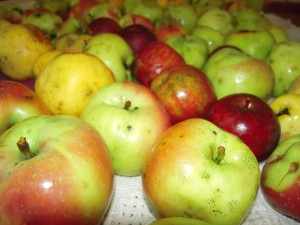 Here are some of the apples we picked. Wild apples vary tremendously in size, shape, color and taste. We picked the ones we liked best, about the equivalent of 4 big supermarket bags worth (sorry, I can’t think in bushels.) I don’t worry about the small blemishes on the skin, they won’t hurt you and they come off anyway in a later stage. 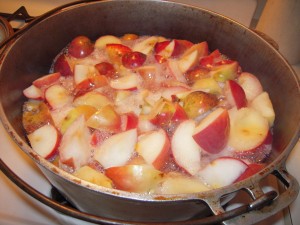 After you wash the apples, cut out any bad parts, cut them into quarters, put them in a large pot and simmer them for about 20 minutes until they are soft. 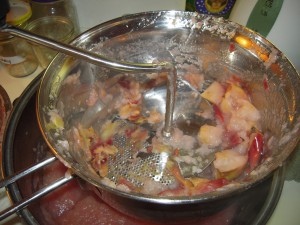 Once the apples are soft, drain them and put them through a Foley Food Mill. I’d never heard of one until my friend loaned me one, and what a difference they make! You just cook the apples and then turn the crank. The skins and seeds are retained in the top and the soft cooked apple comes out the bottom. 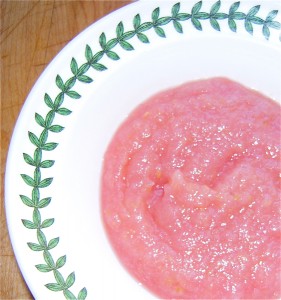 This is what it looks like after it’s been through the mill… add a little sweetener and it’s great as it is. But I go one step further and turn it into Apple Butter (Sauce… it’s still a bit soft once it’s done.) I add tons of cinnamon and allspice and cook it at 325 for hours. Hours. Really. Like 6 of them. Stir every hour or so, and once it’s about half the size it was it’s ready to be put into jars as Apple Butter Sauce. By that time it’s much darker in color and thick and sweet and spicy and yummy yummy yummy. It’s fantastic on toast and even better with a meat like pork if you do eat meat. Definitely one of my favorite parts of autumn!

The sheep love it too, cuz they get all the left overs. Yummy all around. Yeah nature, that’s all I can say.