Welcome to an ongoing inquiry about the behavior of people and dogs.
Blog Home >> Animals >> Dogs and Dingoes, Who is Smarter?

When clients, eyes shining, would tell me how smart their dog was, I’d often respond: “I’m so sorry.” Of course, I said it with a big smile and we all laughed about it, but the truth is, smart isn’t always what we want. Most of us want dogs who are “smart” in that they learn what we want them to learn at lightening speed, but we don’t want them to use their cognitive powers against us. Some dogs do just that; I swear I can see smoke coming out of their ears as they try to figure out how to train us to do their bidding. I remember one dog, a brilliant Standard Poodle, who appeared to spend much of her day trying to figure out how to “beat the system.” Others, the more biddable ones who came hard wired to want to work as a team (far more rare than the former!), not only rapidly learn learn the cues we teach them, they are delighted to perform them just to be part of the social group.

Clearly, “smart” means different things to different people, and in dogs as in people, there are different kinds of intelligence. This was emphasized in a new study by Bradley Philip Smith and his colleague Carla Litchfield in Animal Behavior (Vol. 80, No. 1, 155-162) comparing the problem-solving ability of domestic dogs to that of dingoes.  Dingoes derived from domestic dogs, but have been independent for so long they are believed to represent a wild-type canid more than a companion animal.

The study asked dingoes and dogs to solve a simple problem known as the “detour task.” In this case, a bowl of food was visible behind a transparent barrier. In order to get the food, the animals had to move right or left, detouring around the barrier to get the food. The dingoes figured it out in an average of about 20 seconds, while the dogs, bless them, were more likely to paw, whine, bark and look at their humans to “fix it.” I find this especially interesting, because I have had to teach all my working dogs the cue “Go around.” On a farm you often find you and your dog on opposite sides of a fence, and when they are young they seem to need help understanding that sometimes to go forward you have to go sideways first (to get through the gate). They learn it rapidly, although some learn it A LOT faster than others. Wolves, by the way, are adept at figuring this out for themselves, performing more like dingoes than dogs.  Even if they have been raised by people, they don’t look to us to help them solve problems like dogs do.

However, dogs are better at problem-solving that includes a social relationship. You’ve no doubt heard about the studies in which dogs are better than wolves or chimps at following an arm pointing toward something, usually hidden food. (I should note that Pam Reid, at the BFF conference, stated she has the same skepticism I do about the reports that young puppies automatically follow a point. In our experience, young dogs just sniff your hand if you extend your arm and point toward something. However, they seem predisposed to learn to follow a point, which is important and significant.) It makes such sense that domestic dogs would be better at social communication with humans than wild-type canids, while dingoes and wolves are better at problem solving on their own. As has been argued (including on this blog on 2/2/2009) dogs are excellent tool users… it’s just that we are the tools being used!

A question for you: I’m starting to work on my talk, an Introduction to the APDT Canine Cognition Symposium in Atlanta, and of course am doing a lot of thinking about well, thinking. Here’s my question:  If you could ask scientists to do research on canine cognition and your dog’s mind, what would you ask them to try to figure out? What do you wonder about? Do you wonder if your dog’s memory is like yours? If she understands death? If he can count? I’d love to hear your thoughts.

MEANWHILE, back on the farm: Chaos reigns. We’re having several of the old Birdseye Maple floors refinished, and so the house is torn asunder for several days. It makes everyday routines into adventures–you’ve all been there I’m sure. But the weather broke though for a few days, and it actually felt cool (ooooh, cool!) yesterday. Sheep, dogs and humans are all extremely grateful.

And speaking of grateful, I am grateful for your kind responses to my last blogs. I will indeed continue to interweave information about training and behavior with with my own experiences with my dogs. I’ll admit that sometimes it is a struggle–we are hard wired to pay more attention to the negative than the positive and it takes a goodly number of thoughtful and kind replies to counteract the that say:  “I’m going to stop reading your blog because you just pass dogs around as if they were old shoes.”

Here’s my old shoe now, the wonderful Mr. Will, taken a minute ago, dozing by my feet as I write. 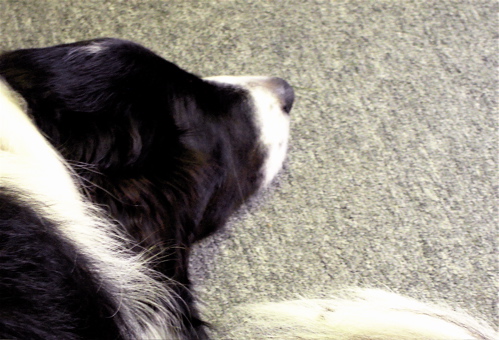 « Hoping for Hope Part II
Two New Books: The Kingdom of Gorillas, Dogs Can Sign Too »