Welcome to an ongoing inquiry about the behavior of people and dogs.
Blog Home >> Animals and the People Who Love Them >> Dogs and Happiness

I miss Willie. Last week I sat by his grave and cried so hard I couldn’t breathe. There are a lot of reasons that I miss him, but the biggest one is that he was one of the happiest dogs I’ve ever known. Here’s what I wrote about dogs and happiness in For the Love of a Dog, Chapter 7, page 217:

It’d been a hard day. Too many difficult cases with heart-broken owners and dangerous dogs. Too many computer glitches and pens that ran out of ink. We all have our own versions of it, but everyone knows what it feels like to have a tough day. I remember walking into the farmhouse exhausted and depressed, burdened by the day behind me, tired from thinking about the chores that lay ahead. There were dogs to feed and walk, sheep to grain and water, baby lambs who needed bottle feeding and a fence crunched by a fallen tree that needed repair before the ram ended up on the highway and I ended up in a whole lot of trouble.

That wasn’t all. Pip had a litter of puppies, five weeks old now, and big enough to have overwhelmed their mom’s efforts to clean up after them. I can’t stand puppies in a dirty pen, so after I fed the adult dogs I turned, with a weary sigh, to cleaning up dirty towels and sprucing up the puppy pen. As I tried to move the towels from underneath them, they began to try to grab a hold of them and play tug of war. Too tired to be charmed, I gently pushed them aside. Everyone who’s raised a young puppy knows how long that lasted. One of the pups, Rosie, continued the game with particular exuberance. Shiny-eyed and sparkling with glee, she’d leap onto the towel as I tried to pull it away, like a coyote stabbing her forelegs onto a mouse in the grass. Rosie’s efforts were so endearing that I couldn’t help but laugh. I forgot about the chores for a while, and began to play with her intentionally.

As we played, Rosie seemed not just overcome with happiness; she seemed to be happiness itself. Her little face radiated so much joy that within minutes I wasn’t just playing with Rosie, I was playing with the same cheerful abandon as she was. All my worries about clients and chores were forgotten. I laughed so hard I almost cried, while Rosie tried out her newly found athletic abilities, leaping and spinning—sort of—on my lap. Her efforts often ended in abject failure—she’d fall over sideways or topple backwards mid-spin—but her face never lost its look of pure, unmitigated joy. It makes me happy just writing about it. It made me happy all the rest of that night, when carrying water and dragging trees off of fences became a pleasure, rather than a chore.

I can’t count the number of times that the happiness of a dog has flowed in my direction, but it’s one of the reasons I have dogs. Surely, it’s one of the reasons we all have dogs. We don’t spend nine billion dollars a year on dog food just to have dog hair all over our couches. Dogs may guard our houses and herd our sheep, but that’s not the primary reason we have them. Dogs make us happy, because if dogs do anything well, it’s being happy themselves, and happiness—bless it—is catching.

The fact is, some dogs radiate happiness more than others. I am a lucky, lucky woman, because even though Willie is gone, I still have Maggie. Maggie’s happy face is as happy as happy can be. Of course, like all dogs, that’s not the only face she has–she’s as expressive as any dog I’ve ever had, and her Valley Girl Pout Face could get her a job in Hollywood. But her happiness is contagious, as happiness often is.

That day, after I stood up over Willie grave, the ground now a riot of pinks and oranges from the zinnia’s I planted, I dried my tears, took a breath and walked back to the house. And there was Maggie, eyes glowing with joy, dropping her favorite toy at my feet and looking up in dopamine-charged anticipation of the game to come. I picked up her rubber stick, and lost myself in the moment. 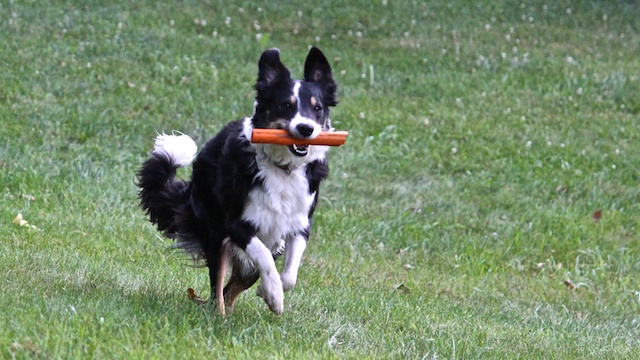 I would love to hear your stories of how and when a dog has brought you a special moment of happiness. I’m sure we all would.

MEANWHILE, back on the farm: Speaking of happiness, Maggie ran on our first “Open course” in Minnesota this weekend, and I left feeling pretty darn happy. Not after the first day, when Maggie and I were both overwhelmed by running for the first time on such a huge course. (The sheep were set about 350 yards away–that is way, way farther than you might think. Your dog is a tiny little dot by the time they get to the back of the sheep.) She was intimidated and let the sheep take charge, I was an idiot and couldn’t think straight and so got DQ’d. BUT, she did a lovely outrun and found her sheep without any extra cues, so that in itself was a victory. (Days before at practice she had not been able to do that.)

Our next run the second day contained some errors, but Maggie put her big girl pants on and took charge of the sheep. She did a lovely outrun, handled the sheep well on the fetch, and we completed both the drive and got the sheep in the pen. Most of the points off were handler errors, all on me, but she was hesitant on the cross drive, as she often is. Given that we were competing against people and dogs who have run in Open for years, I was truly happy at our first Open course outing. Our score of 62 wasn’t a good score (70’s are good scores, 80’s are great, all out of 100), but it wasn’t a bad one either, and plenty of dogs couldn’t complete the course. So–happiness!

More happiness: Last fall I planted Bee Balm beside our living room window, because I knew it would attract hummingbirds. Sure enough, the hummers come all day long to fuel their hyper metabolism. I took these photos sitting on the living room couch–laziest nature photography ever. 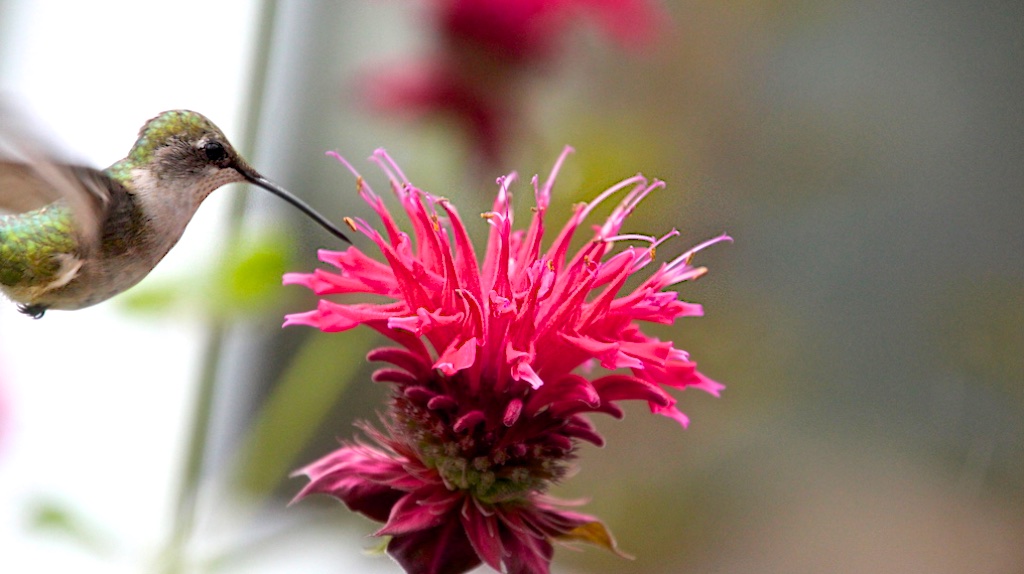 Look closely, really closely at the photo below, and you can see a tiny white line leading into a flower–that’s the tongue of this female ruby-throated hummingbird who is nesting nearby. 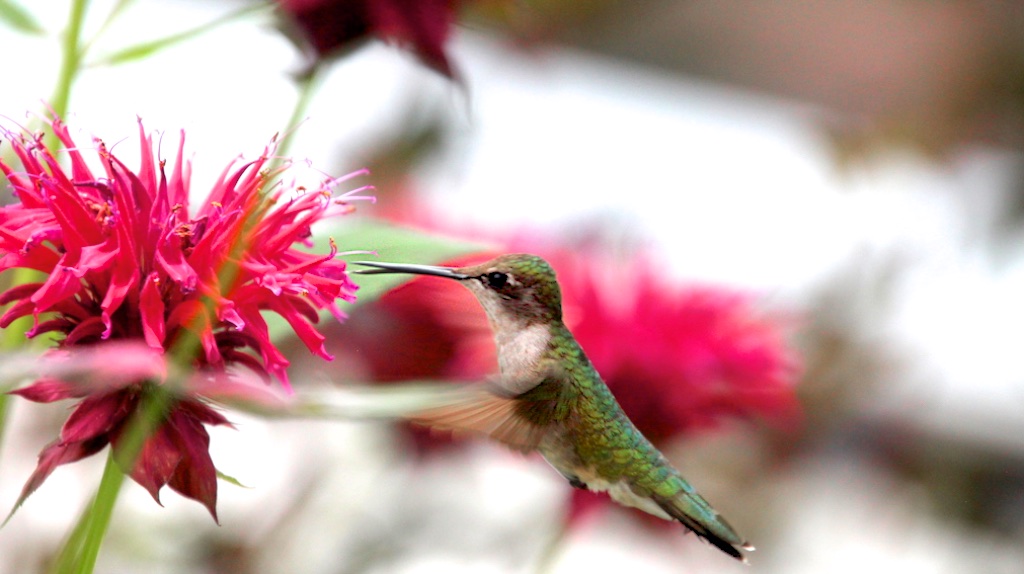 I got to watch a male do his dramatic courtship dance while weeding in one of the gardens. If you haven’t seen it in person, check it out; it’s awesome.

I included this photo because it illustrates the wing action that allows hummingbirds to hover–their wings actually describe a figure eight. Watch the slow-mo video, it’s way cool. 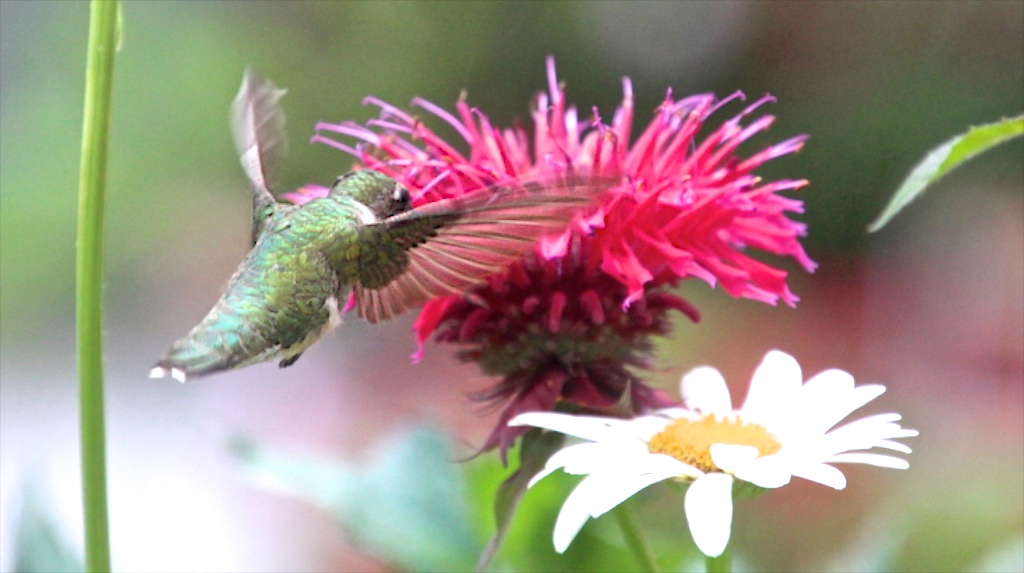 “I haven’t seen a tree frog yet this summer” I said to myself a few days ago. And then look who showed up in my hibiscus bush. 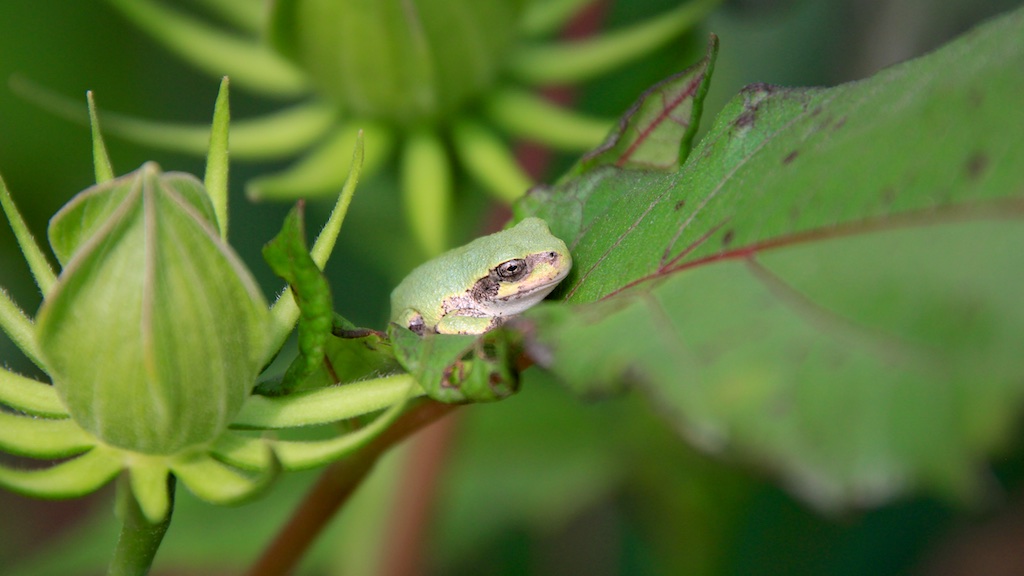 The universe provides. What is it providing you this week?

« Don’t Let the Chain Fool You
On vacation. Sending flowers. »