Welcome to an ongoing inquiry about the behavior of people and dogs.
Blog Home >> Dog Behavior >> Dogs and Kids

I recently spent three evenings with Jim’s son, daughter-in-law and granddaughter Taylor, and so the issue of kids and dogs is near and dear to me right now. I also, in that serendipitous way of the world, just received a question about how to find help for a Boxer who growled at a grand child from the post Who Should Treat Behavioral Problems.

Young children and dogs can be the best of friends, or the worst of enemies. There’s just no way around it, to some dogs, kids can be unpredictable, rude, and/or frightening. And surely, to some kids, dogs can be unpredictable, rude and/or frightening. Given that, here’s some generic advice, sprinkled with specifics from Will’s encounters with Taylor.

1) Never live in the land of “I-think-it-will-be-okay.” If you are not 110% positive that an interaction between a child and a dog will be safe, don’t allow it to happen. Any time I hear “I think it will be okay,” red flags start to wave. What does “I think it’ll be okay” mean? That maybe, probably, it’ll be okay, but you’re not sure? I’ve had 21 years of hearing people say that they “thought” it would be okay, and then they were sitting in my office, crying about whether to euthanize or re-home their dog. Granted, two decades of hearing about bites, law suits and potential euthanasias makes a person especially cautious, but that’s still what I’d advise any parent or dog owner to be: extra cautious. When dogs bite, it happens like lightening, so don’t think (there’s that word again) that you can prevent something because you’re ‘right there.’ You can’t. If you’ve ever believed me on anything, believe me on this.

2) Always protect both the child and the dog. It is neither fair nor safe to sit back and let a child harass a dog (or vice versa) because the dog is “so good with kids.” Well, he may be now, but after a number of years of pulled tails and poked eyes, he may decide he’s had enough. (That was a VERY common presentation in my office: “He’s always been so good with kids, he’d let them do anything to him, and then, out of the blue, he bit the neighbor boy.”) If you don’t protect your dog from a child who has not yet learned to interact politely with a dog, you are forcing your dog to protect him or herself. Some dogs can’t take it the first time, but others put up with it until they are older and sick of it. Even if your dog never threatens a child, it’s not fair to the dog AND it is teaching the child to interact in ways that may get him bitten by another dog. Speaking of teaching. . .

3) Both children and dogs need to be taught, gently and kindly, how to interact. If your dog is too exuberant, you might yelp as if you were a litter mate when the play got too rough. I’ve used a sound like ARPPP! (think seal here), that bursts out of my mouth when a dog has been a bit too rough with something weaker. It usually gets a startle response from the dog, and sometimes (not always) the dog seems to get the idea that she must self-handicap better and inhibit herself. Children always need to learn how to interact kindly with real dogs, given that they tend to treat them like stuffed animals until they learn better and acquire more emotional control. Any trainer or behaviorist can tell you legions of stories about kids who ran up to dogs, grabbed their heads and kissed the dog on the nose, while the parents watch with big smiles on their face. Until the dog bit, then the smiles go away.

4) Management is a good solution in many cases. Lots of dogs either can’t tolerate the energy and arousal of young children, especially if they are not used to them. Some dogs can learn to be comfortable around children with positive experiences, and some dogs can’t.  Some dogs can be around kids in certain contexts, and not others (see about Willie and granddaughter below).  There is nothing wrong with keeping kids and dogs apart, as long as both are in comfortable places. Willie loves his crate, and spent a lot of time in it Sunday when the whole family was visiting. Not for a minute did I feel guilty–he could rest and not be expected to deal with arousal levels over his head, and I could relax and enjoy  my company rather than being vigilant every single second.

5) Use conditioning to ease the relationship. I’ll use Operant conditioning next time Taylor comes out, asking Willie “Where’s Taylor?” He loves this game, loves “Where’s Jim” and “Where’s Trisha?” and it’s a great way to relax him around a child. Of course, I’ll be standing right next to Taylor, and will have her throw him a toy when he gets close (but not too close.) I’ll use Classical conditioning too, having Taylor toss or feed him treats (he’s has already taken several from her hand, mommy instructing her to hold her hand out flat on top of mommy’s hand) or toss his toys. I can teach Willie to lie down every time Taylor starts to run, to play bow when he sees her… etc etc etc. The point here is that it is our job to teach our dogs how to interact, what we want from them, and to do all we can to influence their emotional state when around children.

Will doing all this make every dog trustable around kids? Not a chance. Every dog is different, and some dogs will never be comfortable around kids, period. For those dogs, either management or a new home might be the best alternative. I’d be curious how you have handled this issue, and what your experiences have been. It’s such a huge part of our culture: kids and dogs, and how they interact. (By the way, Colleen Pelar has a book coming out in fall on how people in the profession can help parents raise kids and dogs. I reviewed it and it is great! I’ll keep you posted.) (8/23: When I first posted this I attributed the book to Robin Bennet, who has collaborated with Colleen in the past. Robin, gently and graciously corrected my foolish  mistake.)

Meanwhile, back at the farm: here’s Lassie and Taylor (and her dad Shane) playing around the wading pool (of course, this wading pool is normally for the dogs!). Note Lassie’s open mouth and relaxed posture, a good sign that she is comfortable at the moment. However, even though Lassie has been absolutely bomb-proof with children for all of her life, we still monitored all her interactions with Taylor, who didn’t know (how could she?) that it’s not a good idea to take a dog’s muzzle in your hands and squeeze. Why Taylor wanted to do this no one knows, but her parents are fantastic about teaching her to be polite around dogs, and they watched her (as did I) literally every second she interacted with Lassie. This level of hands-on interaction was only allowed because I have 14 years of experience with Lassie as adoring young children, and because Taylor’s parents were as vigilant as I. Even though Lassie has been amazing around kids, she IS 15 1/2 years old, and it is not fair to expect her to put up with things she would have in the past, so we still watched all interactions carefully. Even at only two years of age, Taylor is learning how to interact with unfamiliar dogs… would that all parents be so wonderful as Taylor’s! 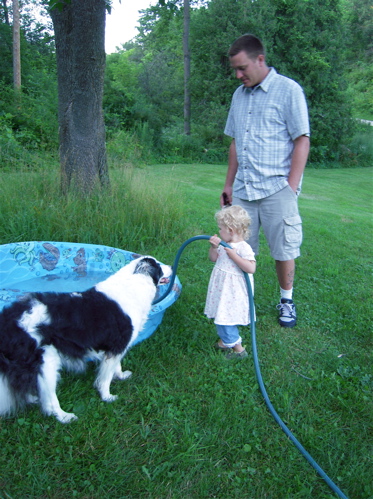 Here’s Taylor and mom Rachel at the zoo, doing what all kids do: hugging. And she’s hugging the perfect animal, a statue that can’t take offense or turn around and bite her! 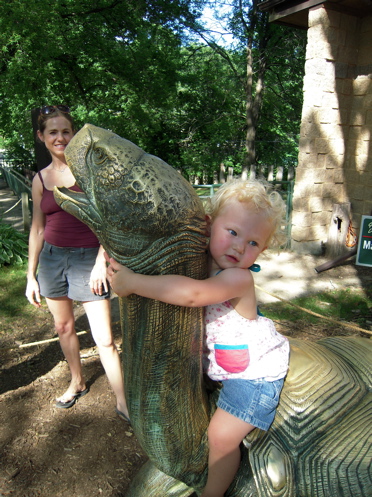 Teaching children not to hug dogs is a true challenge, it is clearly part of our species’ natural repertoire (I talk about this at length in The Other End of the Leash), and something that is hard for children to inhibit. To us, hugs are a sign of affection, but to most dogs they are, at best, something to put up with. To nervous, reactive or status-seeking dogs, hugs are rude, offensive and threatening. The few times that Taylor started to hug Lassie we gently re-directed her to another behavior. However, I never would have allowed Taylor and Willie to be in a situation in which a hug might even have started… I simply don’t trust him around children this young yet. Willie is reactive, easily made nervous, unfamiliar with young children, and nippy when objects (not live ones) start moving around fast. It has taken him years to keep himself from nipping a mop or broom and I have to remind him still not to nip the tires of the wheelbarrow when it is moving. Granted, that’s not the same as living things, but again, being conservative is smart. Being anything else around kids and dogs is not. When Taylor was running around in the house, Willie spent lots of time in his crate (and got lots of treats brought to him for being so quiet and patient about it). Later, we went on a walk with all of us in which Taylor and Willie could get used to each other without directly interacting, and spent some time in the yard with the whole gang outside. Note that there are no photos of Willie and Taylor; taking pictures would have distracted me from being as vigilant I necessary. Maybe next time?

On a walk in a prarie, which was the third time that Willie had seen Taylor, I noticed that Willie ran up, with a completely relaxed body, to Taylor and her mom and licked faces. I praised and called him away immediately…. to insure that things ended on a good note. Overall, everything went beautifully, but possibly because I was hyper conservative, never allowed any interactions I wasn’t 110% comfortable with, and Taylor’s parents were amazingly observant and cautious. Things might have been fine without that level of vigilance, I am the first to admit I was being hyper conservative. . . but there was no cost to being so, and a big cost to everyone if things had not gone well.

And, if you’ll indulge me, just a note about Jim’s grand daughter? . . .  Can I say it now, or is it just too tacky and grand-parenty?  Oh well, I’ll say it anyway, awash in oxytocin as I am: IS TAYLOR CUTE OR WHAT?