Welcome to an ongoing inquiry about the behavior of people and dogs.
Blog Home >> Dog Behavior >> Dogs and People Both Achieve the Runner’s High

We’re happy to introduce Karen London, Ph.D. as a guest blogger for The Other End of the Leash this week!  Enjoy!

If people go running by your home accompanied by their cats, geckos, ferrets, parrots, or rats, then you live in a very different neighborhood, perhaps even a different world, than I do. It’s just not part of our relationship with those species, however close we may be to them. Yet running is something that many of us share with our dogs, to the point that it’s almost cliché for people to swear that their dog is the best running partner they’ve ever had.

There are so many reasons why people choose to run with their dogs beyond just knowing that their dogs need the exercise. Unlike most human running partners, dogs don’t ever have meetings that go late. They wouldn’t rather sleep in. They are always ready to go, and are generally willing to cruise at any pace with equal ease. They don’t complain that the weather is bad so they’d rather skip today’s workout. The chance to go for a run is greeted with enthusiasm by our canine companions. The truth is that dogs typically like running, which is yet another commonality between dogs and humans.

Okay, perhaps not ALL humans. (Trisha, for example, who is one of my very favorite humans, has described running as abusive though she is very active both on her farm and with long walks and hikes, which are great joys to her. She thinks it’s great that I like to run and that it makes me happy. Still, every time we room together at a conference and she sees me head out for my morning run, I can’t help wondering if she’s thinking, “Hey, better you than me!”)

In the last hundred years or so, people have become more sedentary than at any other time in our evolutionary history, and many of our dogs have joined us on the couch. (A small percentage can’t run because of health issues such as changes in structure that make the high aerobic demands of running problematic, as is the case for the brachycephalic breeds such as the Pug, Pekingese, and Bulldog, but most don’t run simply because we don’t give them the opportunity.) Though most dogs are still generally excited about running, the human species, outside of a small percentage of fanatics of the sport (or weirdos as we are sometimes called), isn’t interested in heading out to run each day anymore. As a result, those good feelings we get from running—the runner’s high—are not felt as often by as many of us. Yet, the potential to activate the chemical reactions that cause the runner’s high still exists within us. The ability to experience that rush of good feelings is shared by both dogs and people, even if we aren’t all dipping into the opportunity with the frequency that our long-ago ancestors did.

The runner’s high is caused by endocannabinoids, which are neurotransmitters in our bodies. These chemicals signal the reward centers of our brains, giving us the message that what we are feeling is pleasure. They lessen both pain and anxiety as well as create feelings of well-being. Running results in higher levels of endocannabinoids in our blood, which makes us respond to running by feeling good.

A recent study by researchers at the University of Arizona investigated the production of endocannabinoids in multiple species, including dogs, as a result of running. There are lots of advantages to running, including to capture prey and to avoid being captured by predators, but endurance running is still not likely to happen if it feels bad. These scientists were interested to know whether it’s possible that species that do a lot of long-distance running evolved to like running via the pathway of reward centers in the brain that respond to chemicals produced while running.

The researchers predicted that there would be a different chemical response to running in species with a history of endurance running compared to species whose natural history does not include running. Specifically, they predicted that running would result in chemical reactions in the brain that are associated with pleasure in endurance running species but not in species that don’t typically run long distances.

To investigate this issue, they compared the effects of running on endocannabinoid levels in three species. Two of the species—dogs and humans—come from long lines of endurance runners over the eons. Running has been an integral part of their evolutionary histories, even if not all of individuals of those species regularly run today. The other species, the ferret, is not a running species. Though ferrets can move pretty quickly over short stretches, running for long distances is not a part of their natural history.

This study provides evidence that dogs and humans receive a chemical reward for running but that ferrets do not. When I say that dogs receive a “reward”, it’s hard not to think like the dog trainer I am and compare this change in brain chemistry to a treat, since both provide pleasure. It gives our dogs pleasure to eat steak, which is why steak makes such a great reinforcement for training. Dogs are more likely to perform a behavior if doing so makes pieces of steak available. Having the reward center of the brain activated by the chemicals produced while running is a high-quality reinforcement for running, and one that has been acted on by the forces of evolution to reward people and dogs for running. In species that are endurance runners, the changes in our chemistry as a result of running and those effects on the brain help us enjoy running.

The brains of dogs and humans—both natural runners—are hardwired to enjoy running, which may have provided the evolutionary mechanism necessary for us to develop such skill at it. The quirk of brain chemistry that makes both dogs and humans love running is not universal among mammals. Ferrets, for example, derive no pleasure from running.

Simply put, this study shows that dogs and humans, unlike ferrets, achieve a runner’s high. Of course, it also suggests that Trisha is part ferret. (She said I could write that, in case you were wondering.)

So, consider indulging your dogs the next time they are begging to run. It turns out you are just like them—born to run!

I’d love to hear your views on running and dogs, whether you and your dog participate in this activity or not.

Here I am with one of my best running buddies as we share some water during our post-run happiness: 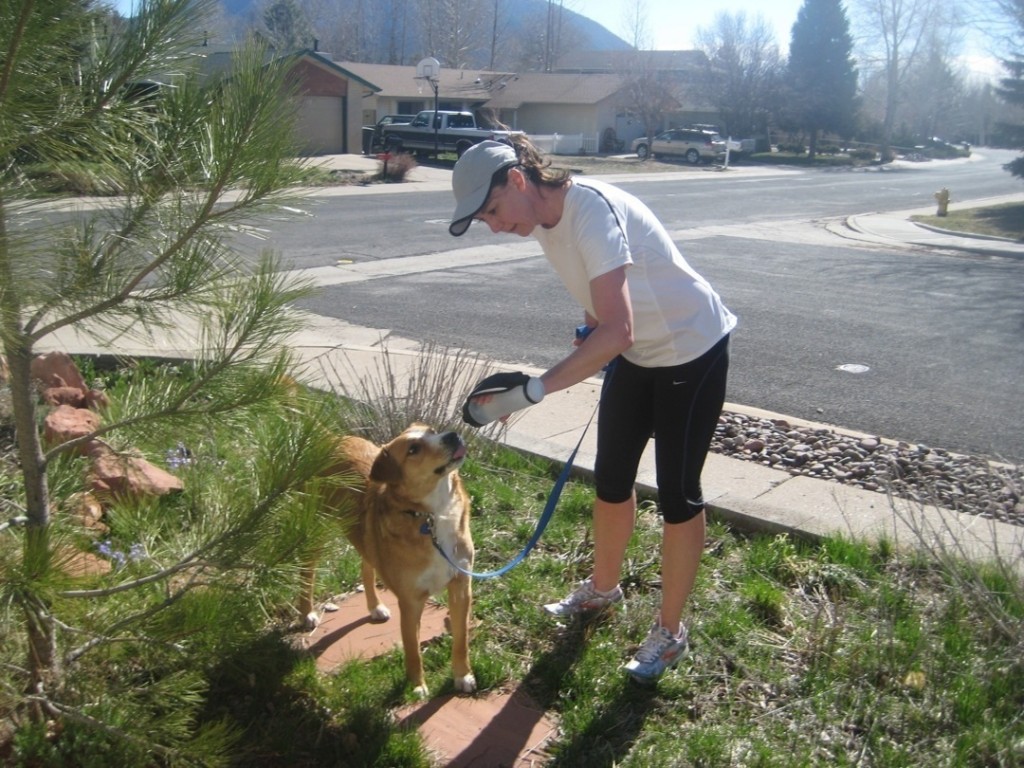 And here’s elite professional runner and dog trainer Emily Harrison with her dog Super Bee, who I often see running around my neighborhood. Besides the fact that I like both Emily and Super Bee personally, I have to share this picture because it seems just plain wrong to write a post on Trisha’s blog and not include a photo of a Border Collie. 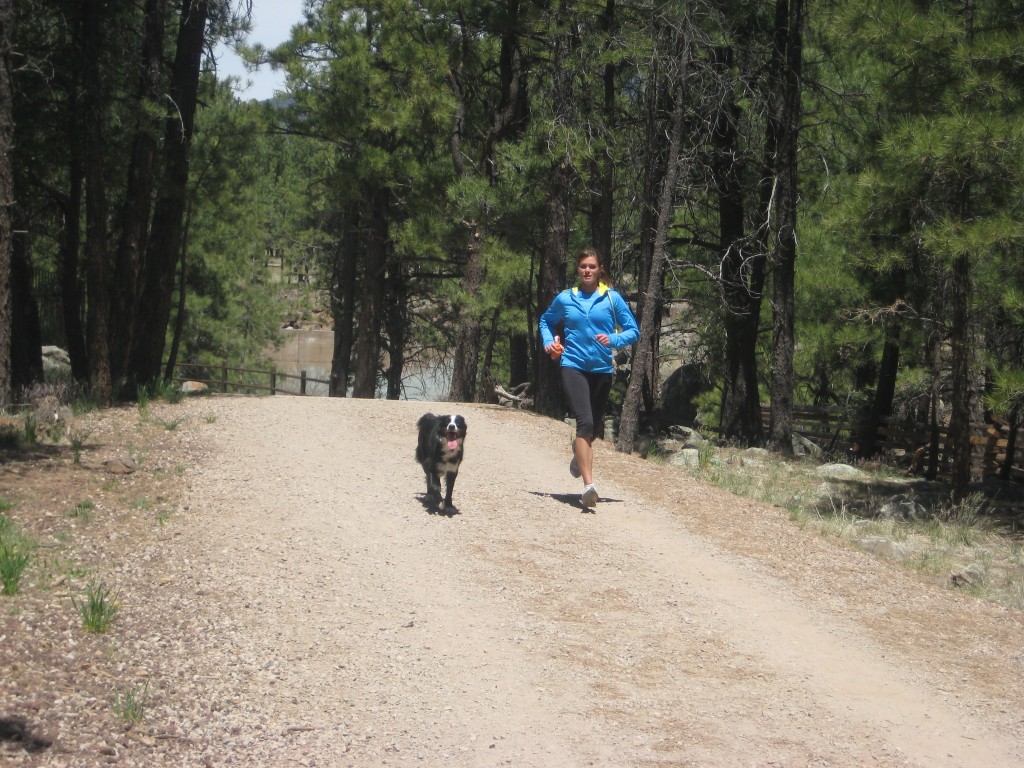 Karen B. London, Ph.D. is a Certified Applied Animal Behaviorist and Certified Pet Dog Trainer who specializes in the evaluation of serious behavior problems, including aggression, in dogs.  She is the behavior columnist for The Bark Magazine, writes The London Zoo column in the Arizona Daily Sun, and is the coordinating editor for that same paper’s weekly running column, “High Country Running.” She runs and trains for races with dogs and people, with her favorite training partners being her husband Rich and her old dog Bugsy, who was half Black Lab and half Handsome Stranger. She has co-authored five books on canine behavior and training with Trisha.