Welcome to an ongoing inquiry about the behavior of people and dogs.
Blog Home >> Animals and the People Who Love Them >> Dogs and Psychological Trauma

In 2006, Willie who came to us as an eight-week old puppy who behaved as if he’d served three tours in Afghanistan, and came back with the canine version of PTSD. The title of The Education of Will is in part based on his name. In the book I talk about how all mammals can be psychologically traumatized, and that they share many of the same needs as human survivors for a sense of safety and autonomy.

One of my motivations for writing the book was to make it clear to the general public that dogs can experience trauma, and that the last thing they need is force or coercion to “behave.”

Given that I’m traveling around the the country talking about this issue through the very personal lens of Willie and myself, it seemed appropriate to repost this article that I wrote in September of 2015, about how to identify a traumatized dog, and how to help it recover.

In The Boy Who Was Raised as a Dog, Dr. Perry writes about his experience with Justin, a horribly abused young man, as well as other horrifically abused children, to inform the world about the effect that trauma has on a developing brain, and how he and his team have gone about helping damaged children to heal.

The book is flat out brilliant, and anyone who works with an individual who has been traumatized, human or canine, should read it. I’ve believed for years that many of the dogs I’ve worked with had behavioral problems because of some kind of trauma, and I think a lot about what we’ve learned working with human trauma victims can be applied to dogs.

Of course, what we can’t do it talk to dogs, ask them what happened, or advise them to start writing in journals or drawing pictures. All of those things, done the right way at the right time, can help victims heal from all kinds of traumas. But what CAN we incorporate in working with dogs who behave as if they have been traumatized?

Much of what he writes about reinforces what I’ve learned in the past and spoken about at APDT in 2014 in a talk titled People, Dogs and Psychological Trauma. Here’s the essence, the essential points from what is a very complex topic: 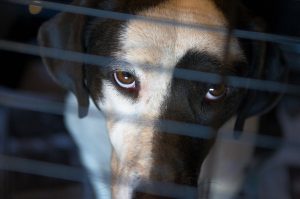 Photo thanks to the ASPCA Behavioral Rehabilitation Center

How do we identify the dogs? We can’t ask them, and they can’t tell us that something horrible happened to them in the past. So often dogs are “diagnosed” as “dominant” or aggressive for some reason that involves what we’d think of in people as character flaws. To my surprise, this happens commonly with children; many of Perry’s cases involved victims who were diagnosed with a range of issues, from ADHD, to just being plain stubborn or manipulative. Rarely had anyone ever asked what had happened in their past that might explain their behavior.

Here are some symptoms we can look for that MIGHT indicate trauma in a dog:  Anorexia, won’t eliminate, pacing, inability to sleep, hyper-vigilance, extreme fear, being easily startled, outbursts of aggression or rage that have no predictable pattern, and refusal to play. Of course, this list is just a start, but we have to start somewhere.

If we suspect trauma in a dog’s past, then how might we go about trying to help him or her? Again, we can look to what helps people:

Create a sense of safety. Job One, no question. Traumatized individuals have a brain set on constant alert. Without doing all one can to create a sense of security, it’s impossible to go much further. With dogs, that might mean letting it have a “safe house” to go to, without being forced to interact for predictable portions of the day. In my experience, a lot of dogs are pushed too far too fast, without being given time to feel safe and secure.

Give the dog some control. Victims of trauma were subjected to experiences that stripped any feelings they had of autonomy. Perry’s first sessions with the children he worked with was to give them control over the session. Want not to talk? Fine. Let’s color together. It was up to the child to initiate conversation. Dogs can get back some sense of control too, by teaching them appropriate behaviors that get them what they want, and letting them learn that they have some control over what happens to them. This means that the use of force must be avoided whenever possible. Granted, there are times it is needed to keep an individual safe, but being forced is the opposite of being in control (by definition), so we should avoid it whenever we can. 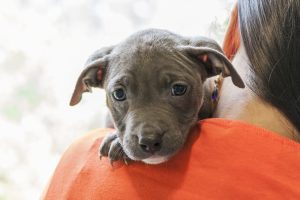 Photo thanks to the ASPCA Behavioral Rehabilitation Center

Social Support. Dogs and people both are highly social species; that is, of course, why we get along so well. One of Perry’s most important observations is that much of what healed the children he worked with occurred outside of therapy. What mattered most were relationships–social support from others that provide a sense of belonging, security and being loved. I suspect the same is true for dogs. Of course, it can be extremely difficult to create a relationship with an individual who has experienced profound trauma (especially if the trauma was in the early part of life when the brain is still developing), but it is the key to helping victims heal. Surely it is true also for dogs. The challenge of this leads to my last point…

Time and patience. Perry says: “I also cannot emphasize enough how important routine and repetition are to recovery. The brain changes in response to patterned, repetitive experiences: the more you repeat something, the more engrained it becomes. This means that, because it takes time to accumulate repetitions, recovery takes time and patience…” He goes on to note that regrettably, neither qualities are in abundance in today’s society. Agreed.

There is so much more in this book that can apply to dogs: [In the 2015 post I began by talking about an amazing book, The Boy  Who Was Raised as a Dog] One of the most important is the author’s “neurosequential” approach, which involves figuring out the stage of brain development at which the trauma occurred, and providing what the child didn’t get at that stage of development, even if it has little to do with the child’s chronological age. That is trickier with dogs, but the fact is that understanding the brain and its development in relation to behavior is an important ingredient in treating trauma. His use of appropriate medication (very thoughtfully used) and heart rate monitors is also something we need to continue to explore with dogs. (Note the groundbreaking work done by CAABs Peter Borcheldt and Nancy Williams on heart rate variability in dogs.)

This is such a complex topic, I could write about it for hours for today. But I’ll stop here, except to direct you to a few other interesting sources. Two related articles that I’ve written discuss the relationship between digestive problems and fear and how Confrontational Techniques Elicit Aggression. (Note that many of the children Perry writes about were subjected to extreme force as “treatment,” including by professionals in the field.) You might also be interested in the work of Rise van Fleet, a child psychologist who uses play to work with traumatized children, and has used similar techniques to help traumatized dogs.  The best book I’d ever read, up to reading Perry’s book, on trauma and recovery was written by Judith Herman, titled, appropriately enough, Trauma and Recovery. As I said, it is such a big topic. But if it interests you, pick up Perry’s book right away. I read it almost cover to cover yesterday and this morning.

I’d love to hear your thoughts on this important and complex topic. Please write in with anything you have to add; I look forward to reading your comments. Note that there were many insightful comments to the original post; take the time to read them if you can.

MEANWHILE, back on the farm: After 5 talks in 5 days in 4 cities, I got to be home for a day and a half. Although I am happy to be home for a brief respite, I still want to thank all of you who have come up at book signings and said such thoughtful, kind and supportive things. The words “Thank you” aren’t enough, but know that they come heartfelt.

And I’m extra lucky… winter snow and sun greeted me at the farm. So beautiful! Went on a lovely walk with the dogs, and Maggie and I worked sheep, both of us so happy to have the chance. When you read this I’ll be on the road again, but how sweet to be home for awhile.

Lots of ice a few days ago, turning the trees all white and sparkly, but luckily not so much that it caused a lot of damage. 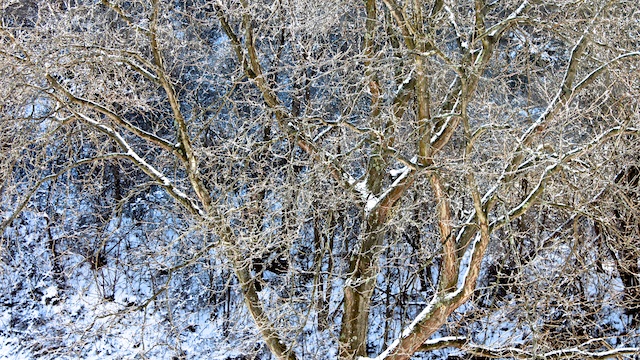 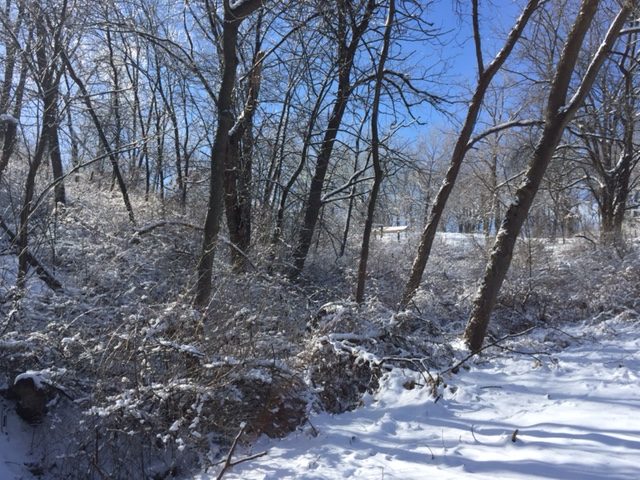 And Willie says THANK YOU Ohio Vet School Vet Behavior Club for his present. Regretably, it only took about 5 minutes for this toothy Badger to dismantle the Buckeye… (I’d  include a better photo, but Willie never stopped ripping and tearing. Why DO dogs love to rip stuffing out of toys so much?) 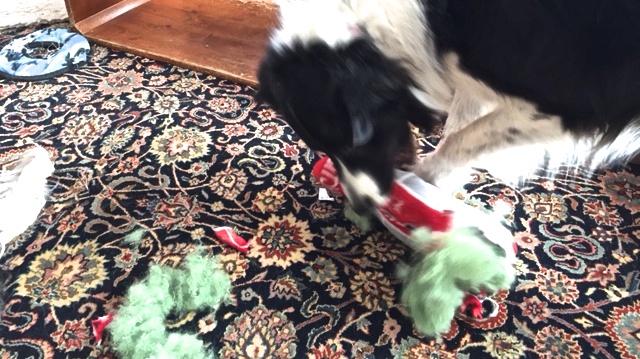 « It’s Official! The Education of Will is out in Print and Audio.
Sleep Disturbance Case – Urgent »