Welcome to an ongoing inquiry about the behavior of people and dogs.
Blog Home >> Animals >> Dogs As Family, People As Packs

It’s not just us that sees our dogs as family; apparently, dogs see us as family too. This may not be shocking news to many of us, but it is always good to look at our beliefs objectively. An interesting study was recently published on Plos One about whether dogs are attached to their owners in a similar way that children are attached to their parents. Done by Horn, Huber and Range, the study was based on the early work of ethologists Bowlby and Ainsworth, who argued that human infants require a “secure attachment base” to develop normally. Far beyond simple “affection,” what they called true “attachment” included voluntary close proximity between parent and child, distress from the child at separation, seeking out the attachment figure for contact and reassurance if stressed, and most relevant to this post, the use of the attachment figure as a “secure base for exploring the environment.” These formulations were originally done on children, but in the decades following, researchers have found similar patterns in the behavior of the young of many species.

In this study, the authors asked if dogs would show the same type of attachment to their owner, who is, after all, a member of another species, albeit the one they live with. Owners brought in dogs who loved food and were comfortable in novel environments. After some pre-testing to ensure the dogs would indeed try to get food out of an object, they gave the dogs food-stuffed items that required manipulation by the dogs to get a food reward. Each dog was given an opportunity to manipulate the object to get the food under three different conditions: owner absent, owner present but silent, and owner in the room and encouraging the dog. The experimenters recorded the time the dog spent manipulating the object (which required a lot of work to release food). They found that the simple presence of the owner, even if silent and blindfolded, had a significant effect on how long the dog tried to get the food out of the object. In other words, the dogs were more likely to “interact with their environment” if their owners was close by. One might argue that the dog’s behavior could be explained simply because distressed dogs sat at the door when their owner was absent (and thus didn’t work on the object), but that did not appear to be a significant factor. Even dogs who showed little or no visible distress when the owner was gone spent less time manipulating the object. (There was always a person in the room, although silent and never looking at the dog.) Nor was it related to a decrease in appetite when left alone; pre-tests had been done to determine if the dogs would continue to look for food even if left alone.

Interestingly, although the dogs did work harder when verbally “encouraged” by their owners, this difference was not significant. Thus, there might have been an impact of owner’s vocalizing some encouragement, but the only difference confirmed by statistics is that the dogs spent more time manipulating a foreign object when the owner was in the room versus not. This parallels the work in other species in which young animals interacted with their environment more frequently and for longer durations if their parent was with them.

You can read more details about the study here. I think it’s an interesting study, as much because it generates a conversation about how we perceive our dogs and how our dogs perceive us. I think of my dogs as “family,” and yet, do not think of them as children or furry people. I am 100% convinced that both Willie and Tootsie are strongly attached to me (and Willie to Jim, too), given that they fit three of the four criteria above: they choose to stay close to me in space, they appear to be distressed if I leave them in an unfamiliar place, and they each seek me out in times of stress.

I don’t have any pithy answers to these questions beyond what I’ve written in The Other End of the Leash, For the Love of a Dog and in blog posts about whether dogs really love us or not. What I do know is that I don’t think of Willie or Tootsie as children, and yet I do see them as part of my family. Certainly there is much about taking care of them that is similar to raising children: They are dependent upon me for their very lives, they are non-verbal, they can not think through problems like an adult human, and the love and affection that they elicit overrides the extensive amounts of dog hair, the smell of fox poop on fur, and an occasional day in which one does little but clean up diarrhea and vomit. I continue to be gob-smacked by this relationship that we have with members of another species. Surely it is one of evolution’s most miraculous results. It seems to be that perhaps we are broadening the definition of family . . .

What about you? How would you describe your dog? As a member of your family? A cherished guest? I look forward to hearing from you…

MEANWHILE, back on the farm: This topic is timely, because I’m leaving soon for a family vacation and have to, yet again, drive away from the farm as a victim of separation anxiety. I hate leaving my dogs, absolutely hate it, and it feel especially worrisome given Willie’s injury and need for careful management. I have wonderful farm sitters, who I know are extremely responsible, and yet, still, it’s hard not to worry. Clearly, I have attachment issues . . .

The great news, though, is that Willie is truly improving. He had his physical therapy session on Monday, his last laser treatment on Tuesday and acupuncture on Wednesday. I can’t possible say what is actually helping, or indeed, if anything is beyond time and exercise restrictions, but he is no longer “off-loading” onto his right hip when he gets up from a down, and has no discernible limp or leg restriction of any kind. Of course, soft tissue damage being what it is, he is still radically restricted: still on leash, still crated often, but now he gets 20 min walks twice a day (Eeeee Hah!) and more exercises on his exercise ball. I’ve entered him into a sheep dog clinic in October, and Courtney says that is more than realistic. I suspect that I may have to give up on getting back into trialing with him, he simply is not a sound dog and I will have to manage him carefully so that he can continue to work sheep on the farm. (And oh, have I missed him! Herding sheep is hard work if you’re a human!)

Here is Willie doing his ball exercise, absolutely one of the best parts of his day. Something to do, and lots of treats… what’s not to love? 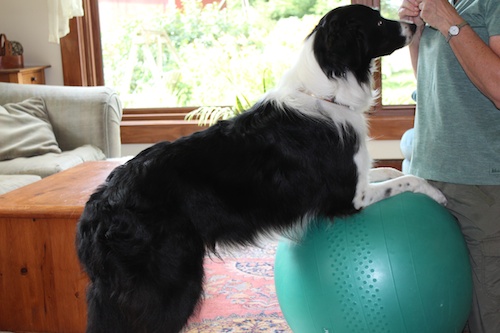 It’s been brutally hot here, hot and humid and clouded with mosquitoes. I’ve never seen it so bad; clearly we are living through the results of a wet spring. Now, however, it’s been dry for too long, it seems we swing from flood (literally) to famine (metaphorically). There is talk it might rain tonight, so I’m watering the garden you see below in hopes it will increase the chances we’ll get some moisture. The day lilies are doing themselves proud, aren’t they? By the way, the white buckets in the background are to keep our new trees and bushes hydrated. The tall tree is a June or Serviceberry, the kind of tree we just had to remove from behind the house. That was a heartbreaker, because the tree is loaded with gorgeous flowers in spring and yummy berries in summer that attract flocks of one of the world’s finest birds, the Cedar Waxwing. We are truly happy to have a replacement, a wedding present from some dear friends. 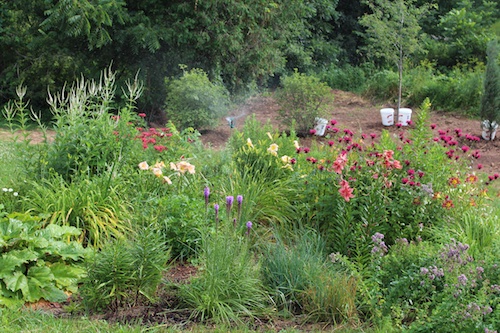 « Ah Youth! The Initiation of Play in Dogs
Things to do after your dog has died »