Welcome to an ongoing inquiry about the behavior of people and dogs.
Blog Home >> Animals >> Dogs in Africa

While we’re in Africa I’m sure all of us will have our eyes out for dogs, whether owned or feral. Out of the cities, most of the dogs I’ve seen in Kenya and Tanzania have been “village dogs,” although many of them are ‘owned’ by someone in the area. “Owned” just means something different there: When you ask “Is that your dog?” it’s common for someone to say yes, but the dog will have no name, no identification and clearly is relatively independent of people. Usually what they mean is that the dog is allowed to sleep in their yard, but that there is not much of a relationship otherwise. Even in the cities, the people I’ve talked to have said that dog ownership is relatively common, but that, at least for most Africans, dogs are often not allowed in the house and are primarily kept as guard animals.

Thus, guarding and protecting seems to be the most common function of dogs in urban and rural areas, although this is not to say that there aren’t lots of Africans who have pet dogs that they love and cherish. But the dogs you see driving around and in villages when on safari look like classic ‘village dogs’ and live relatively independent of people.

On previous trips I’ve noticed that every Masai and Samburu village we’ve visited has dogs hanging around. When asked, everyone says the same thing: the dogs are there to warn them of lions. I’ve never seen or heard of anyone using the dogs to manage or control livestock in any way. (This is mostly done by young children, who yell and throw stones to move animals from place to place.) The Masai and Samburu villages are protected only by thorn-tree fences constructed on the perimeter of the village, and the cattle and sheep are brought in every night and the thorny ‘gate’ is pulled shut behind them. Even inside, the animals (and people) are still sometimes vulnerable though to lions and the dogs are important warning systems for the inhabitants. I would think leopards are also a problem, having adapted to human settlements very well. I know that they are a major predator of dogs in some settlements–I’ll ask this trip if leopards are as big a problem as lions.

Here is a Masai woman with a pup at one village. (You can see the thorn fence behind her that is used to keep out night predators.) Truth be told, the impression I got was that the pup had rarely been handled, but the woman, being no dummy, noticed that we tourists found the dog fascinating, and she accommodated us by staying beside it and trying to pet it. I’ll try to take lots of pictures on this trip of dogs, and no doubt have lots to talk about when I get back . . . 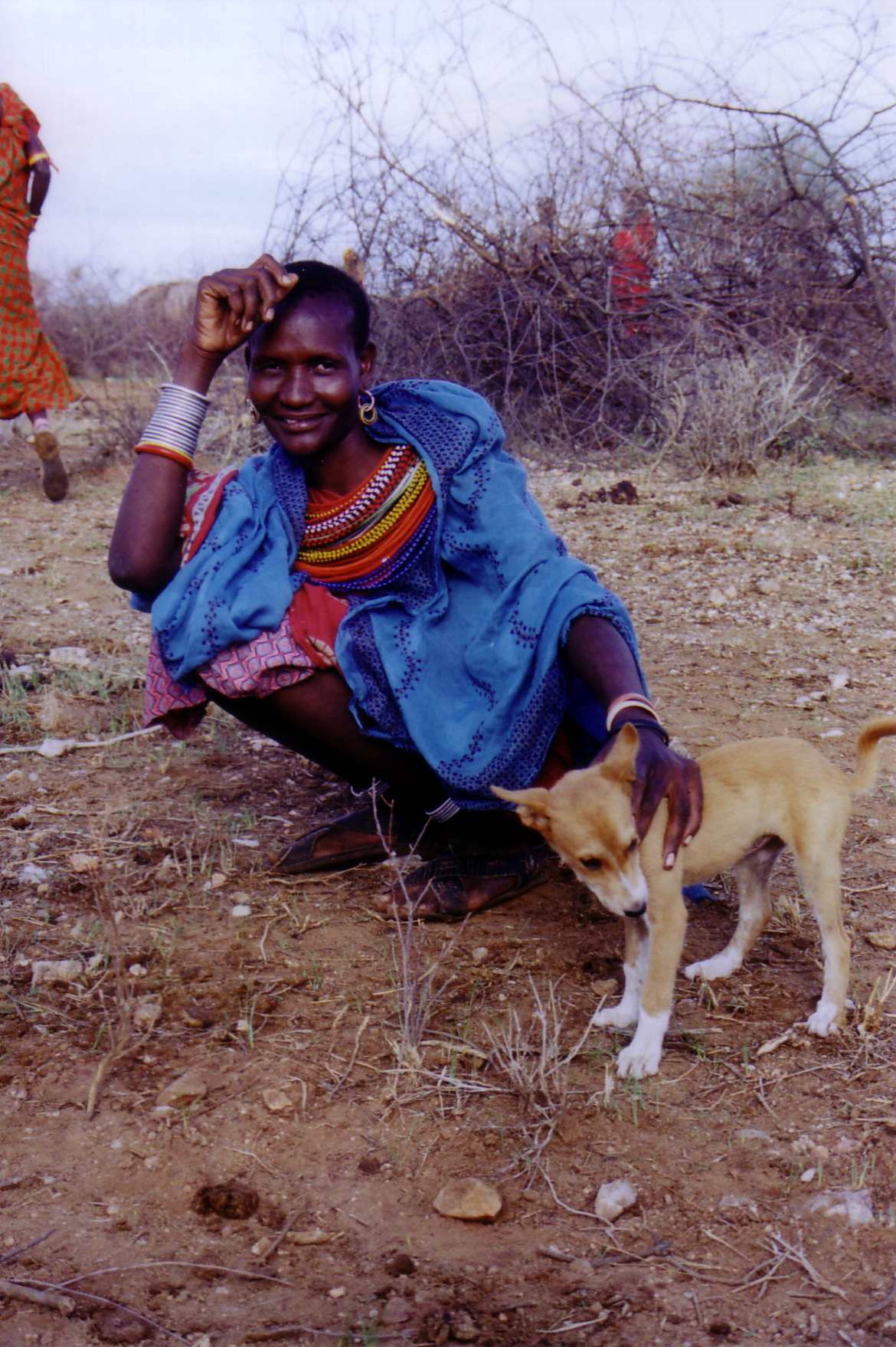 « What Do Barks “Mean”
Botswana 7: Forgotten, but Not Gone »