Welcome to an ongoing inquiry about the behavior of people and dogs.
Blog Home >> Dog Books >> Dogs of Sweden and Norway

I’m still thinking about all the wonderful dogs I met in Sweden and Norway (not to mention their humans!). I paid a lot of attention to breeds–it seems that the mix of breeds here in the states is changing, although that’s just a perception, not a fact. I have seen so many ‘rare’ breeds lately, it seems it’s in fashion to get a dog that no one has ever heard of (or can pronounce the name of).

People in Sweden told me that the most popular breed by far was the German Shepherd, followed by the Labrador Retriever. My 10 days in Scandanavia were hardly an accurate sample, but what struck me most was that I saw a little bit of so many breeds in the two countries we visited. Here’s a breakdown, from my  notes:

Swedish Valhund 1 (the Swedes were very interested to learn what we called their herding dog. They’d never heard the term “valhund” before! Their breed name is Västgötaspets.)

Swedish Lapphund 1 (a northern breed used for  herding reindeer, also called the Lapinkoira, and also found in Finland as the Finnish Lapphund.) This was a first for me, was fun to meet a new breed altogether. And no, darn it, I didn’t get to see one work reindeer, but I did get to see wild reindeer which was a thrill!)

I could go on, but basically, it seemed like every time I saw a dog, it was of a different breed. And I saw dogs everywhere.  What a joy to see dogs come onto trains and buses without anyone giving it a thought.

There was one other exception to the “one dog of each breed” rule… for some reason I saw 7 Cavalier King Charles Spaniels! No idea why.. .random, or are they really that popular? Anyone reading this who has lived over there and has a comment about popular breeds? 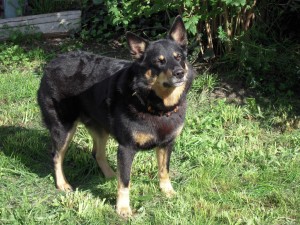 (And have you heard Ray Coppinger’s story about looking for an Anatolian?  He found a dog that fit the description while traveling in the area where they are used, and asked the flock’s shepherd if the dog was indeed an Anatolian. The man looked at Ray and said “Are these the  Anatolian Mountains?” The dog’s genetics were irrelevant, if it was herding sheep at the base of the Anatolian mountains, then OF COURSE it was an Anatolian Shepherd! A good reminder that “breed” means different things to different people.)

« Positive Reinforcement is Defined by the Receiver!
Playing with Dogs in Fall »