Welcome to an ongoing inquiry about the behavior of people and dogs.
Blog Home >> Dog Behavior >> “Dominance” Mythologies, Suzanne Hetts

I’m at the Best Friends Forever Conference in Pennsylvania, taking a quick break from the talks. I have to say that this is one of the best seminars I’ve attended: the quality of the talks is outstanding. Suzanne Hetts gave one today that was fantastic: absolutely the best organized and most informative talk on what dominance is and isn’t that I’ve heard. I couldn’t begin to summarize it all, but here is some especially useful information from it, based on common mythologies that people have about dominance.

I. Most (all?) interactions between dogs are competitive (going out the door first, who gets the toy, etc.). Is this true? No, it’s not. The fact is, many interactions between dogs are not competitive. A great example is the tug game. Some people argue that you have to ‘win’ or the dog won’t respect you, yet many dogs love to play tug for the sake of playing tug and will give you back the toy if you drop it. Suzanne showed a video of one of her dog repeatedly giving the toy back to her husband, Dan, clearly in hopes that he would continue the game. That’s exactly how Hope plays with me BUT not how he plays with Willie. I don’t think Hope is “playing” tug with Willie, I think he simply wants the toy for himself. He grabs it closer and closer to Willie’s mouth, and if he gets it he takes it away. However, Willie and Lassie played tug for long periods of time, both holding only the very end of the toy, giving it back to one another if necessary.  Conclusion: some interactions may be competitive, but lots and lots of them aren’t.

II. Dominance is about Control and “Obedience.” The confusion between ‘dominance’ and ‘obedience’ is pervasive, but they are NOT the same thing. “Dominance” is about who wins a competitive interaction over something that both individuals want, not about responding to a cue or “command.” Calling your dog to come has absolutely nothing to do with ‘social dominance,’ whether the dog comes or not! Confusing those concepts has caused a lot of problems in the dog training world, not to mention to lots of dogs.

III. All dogs are social climbers and are always ready to challenge others (humans or dogs) for social rank. Not true again. First, many people argue reasonably that we know little about “dominance” between 2 species. As used in science, it is between animals of the same species. Second, Suzanne argued, that if anything, most domestic dogs are predisposed to take a subordinate role to humans. We could talk about this aspect for hours (and pages), but she made several excellent points in relation to it. If this hangs you up, ask anyone if they would take a real bone away from a wolf. And as importantly, it is simply not true that all animals of a social group “want” to be high ranking. There are many costs to being in a high social rank, and many benefits to being a subordinate.

IV. Some dogs are just “dominant.” Whoa, careful here again. Dominance is a descriptor of a relationship, not a personality or an individual. If you have 2 individuals and a piece of food between them that they both want, one individual would be described as “dominant” if he or she gets the food 20 out of 20 trials. That’s all the concept meant as it was and IS used in science. What’s often not considered by the general public and advocates of “getting dominance” over your dog, is that it is context dependent. Indiv A might get the bone every time, but Indiv B might get the sleeping place. Motivation and context is everything, and behavior in one context does NOT necessarily predict behavior in another.

I could go on, but better get back to the conference. Most importantly, Suzanne did an excellent job of advocating for people in the dog world to be able to talk about the concept knowledgeably, to avoid polarized conversations that only divide and confuse, to use terms with precision and knowledge, and to avoid repeating assumptions. She advocating for people on both ends of the extremes on this issue to take a deep breath (my words) and educate themselves about what science tells us about social relationships. Here here.

Before I go, here’s a photo I took the day before I left, of Hope’s new friend, Lily, a young Dogo Argentino (sp?), who tends to lie down every time she meets puppies and young children. Clearly she is trying to exert her dominance here!  Lily and Hope couldn’t play, because she had just had minor surgery, but I suspect rollicksome play is in their future. 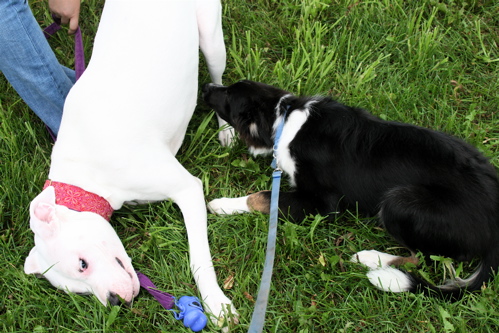 « Do Dogs Recognize our Facial Expressions?
BFF in Pennsylvania, Power of Pets in Madison WI »