Welcome to an ongoing inquiry about the behavior of people and dogs.
Blog Home >> Animals and the People Who Love Them >> Fall Book Review 2016 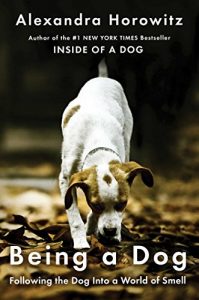 Here’s why: First, the information about olfaction is riveting. There has been a lot written about the dog and his or her sense of smell, especially in two of my favorite books, What the Dog Knows by Cat Warren and Scent of the Missing by Susannah Charleson. Being a Dog enriches our understanding about the world of smell, in innumerable ways.

She does that, in part, by comparing the ways dogs and people use their nose to navigate their environment. Those of you who have read The Other End of the Leash and For the Love of a Dog know that I love comparative ethology, so you won’t be surprised to learn that she had me on page three, when she said “Why, you may not have even smelled this book yet, though it is but inches from your face.” I, who have never hesitated to get down on my hands and knees to see if I could smell what my dogs are sniffing, never considering using my nose to investigate the book. I laughed out loud, and settled in for a great read.

Horowitz delves into the topic like a bloodhound with her nose buried in leaf litter. (Sorry, couldn’t resist.) She visits The Working Dog Center at the University of Pennsylvania to see how scent detection dogs are trained. She takes an animal tracking class that uses scent as much as vision to find traces of wildlife. (Porcupine urine smells are, well, pine-y.) She spends time with perfumers and learns how they educate their noses. Her husband delivers a large package housing 54 small bottles of “wine notes” that she spends months sniffing to train her nose and brain how to distinguish between them.

The book is full of fascinating information: Tail wagging disperses a dog’s scents from their anal-genital reason, which might be why they tail wag so often when greeting others. Dogs inhale through the middle of their nostrils, but exhale out the slits in the side (she’ll explain why). But more than that, it’s beautifully written. Horowitz has always been a good writer, but she’s hit her stride here. I loved her writing–engaging and always interesting, I flew through the book this weekend. I just counted over 23 little post-it notes on pages I want to which I want to return. Don’t miss this one, it’s a winner. 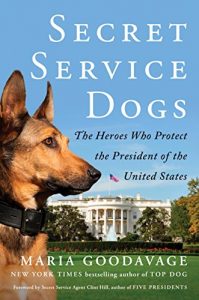 Secret Service Dogs: The Heroes Who Protect the President of the United States, by Maria Goodavage. A note from the author at the beginning of the book says it took nine months to get security clearance to research and write this book. As she says, “It is, after all, the Secret Service.” To get clearance Goodavage left out the obvious problematic details, like names, specific tactics and places where the dogs train. But, perhaps in part because of her work on dogs in the military (Solider Dogs and Top Dog), the author gained unprecedented access to the dogs that we never see: The working canines who protect POTUS, the first family and those in the White House from danger.

There’s plenty here to impress any dog lover, from the dedication between dogs and handlers, some crazy exciting moments when dogs were deployed in split seconds to stop a “fence jumper” from continuing a mad dash toward the first family’s home, and the devastation the ERT (Emergency Response Team) felt when someone got past them in September 2014, over powered a Secret Service agent and made it deep into the White House. These are guys, as is made clear on almost every page, who don’t like to lose, and are obsessed, in the best of all possible ways, with doing their job right the first time. And to doing right by their dogs. Gotta love that.

That said, I have some quibbles. At times the book reads as though it was written by a public relations firm. I’ll grant that there is a lot good to say about these dogs and their handlers, but there are also some interesting questions raised here that could use some inquiry. For example, Goodavage writes that no female dogs are ever used by the Secret Service, because if they went into heat it would be disruptive. Well, dogs can be spayed. And males can be neutered, although the dogs never are, she writes. Hummm. There’s little question that the secret service dog culture is as male dominated as anywhere in the country. Lots of talk about “alpha males” and an ethos of hiding how very much your dog means to you, even though all the other handlers feel the same way. Part of me wants to send them on a retreat for a group hug; the other part of me wants them around me when I’m feeling threatened. None of this is especially surprising, but I would have enjoyed a bit more of a thoughtful analysis from the author than is found in this otherwise interesting and heart-felt book. 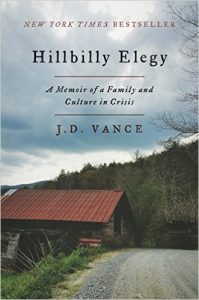 Hillbilly Elegy: A Memoir of a Family and Culture in Crisis, by J. D. Vance. I can’t say it any better than the summary on Amazon. “J.D. Vance tells the true story of what a social, regional, and class decline feels like when you were born with it hung around your neck.” This deeply moving memoir describes his family’s attempt to break out of the extreme poverty of Appalachia and live a middle class life. Many of them failed, although Vance himself goes on to get a law degree from Yale, in part thanks to the steadfast force of his grandmother (who, granted, threatened to use her car to run over someone she felt had dishonored her family) and to the mentoring he received as a Marine. If you want to understand what’s happening in America right now, you need to read this book. If you don’t care about that, but would like to read a fascinating and beautifully written memoir, then read it for that.

Being Mortal: Medicine and What Matters in the End, by Atul Gawande. The author is a surgeon who practices medicine but reminds us of its limitations in this thoughtful, ground breaking book. While western medicine has accomplished miracles, it has also shaped and constrained how we handle aging, often ignoring the elderly’s need for a sense of community, autonomy and connection, while imposing hospital-based restrictions on people in assisted living and nursing homes. If you have any friends or family who is unable to live alone, or if you are lucky enough to live to be an elderly person yourself, this book is vital. It’s also eminently readable and well written. I read it in two sittings and think about it on a daily basis.

Our Souls at Night, by Kent Haruf. This sweet, tender book about two elderly people who find solace by defying convention and spending their nights together is a treasure. I loved it so much I’ll be reading the author’s earlier books over the winter. Read this before going to sleep at night instead of watching the nightly news, and cuddle into your pillow with gratitude for writers like Haruf who can express our shared humanity so well.

Next week I have another book to talk about–what it is about fall that makes books feel so important? Perhaps we’re all just classically conditioned to “going back to school” in fall? I did so love buying my text books, and bringing home notebooks empty and open to the knowledge to come.

What about you? What are you reading?

MEANWHILE, back on the farm: Another unseasonably balmy weekend, so we got to spend the night in the tent on Friday listening to snowy tree crickets sing the night’s passage into dawn. Here’s the foggy, fuzzy world from the tent’s deck a little after sunrise: 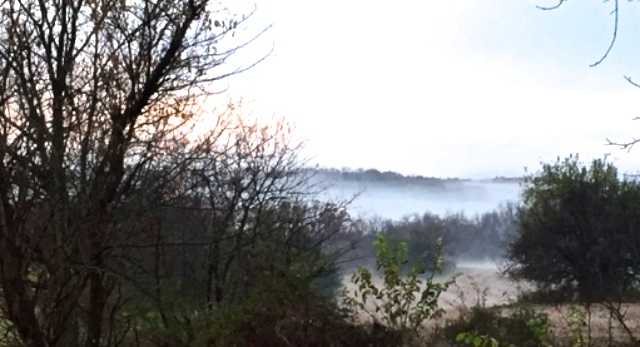 Also saw The Book of Mormon in Milwaukee this weekend (thanks Jenna!) and had a ridiculously laugh-filled lunch with friends. (We were the table you wished you hadn’t sat beside because we laughed so hard it interfered with your lunch. So sorry…) Here’s one of the things we laughed about: this photo of dear friend (and kick ass zoologist) Dr. Annakee Lisberg’s dog, Belly Button. BB was rescued by veterinarian Dr. Jenna Buley, after he lost an eye and his owners wanted him put to sleep. I’m happy to say that he has a wonderful, happy life now. I’ll look up this photo whenever I need a smile, and a reminder that I’m not the only one who isn’t photogenic.