Karen London and I are revising Feisty Fido: Help for the Leash Aggressive Dog, and I find myself fascinated by how perspectives and techniques change over time. We’re not changing the essence of the booklet, far from it, but there are a few things that are being modified because of our experiences and gains in knowledge since we wrote it.

Most of the booklet will remain the same–especially the emphasis on teaching an incompatible behavior when a dog barks, lunges or behaves problematically toward another dog while on a walk. But we are modifying some of the advice, and I’m interested in your experiences related to our recommendations.

First off, we are putting less emphasis on the importance of teaching “Watch” to mean “turn and look at me UNTIL I RELEASE YOU.” For those of you not familiar with the booklet, the first step in a Feisty Fido program is teaching a dog to turn his head toward you and look at your face when you say “Watch.” Once this is mastered in an area with few distractions, the owner tells the dog to Watch every time he sees another dog, working up to a dog who “AutoWatches” every time he sees another dog on a walk in the neighborhood. This not only teaches an incompatible response to the sight of another of the same species, it classically conditions a dog to feel relaxed and happy at the sight of another dog (changing “Oh NO!” into “Oh boy!”).

Over the years we’ve found that most owners have more trouble with the release than the cue Watch itself, and most importantly, that most dogs don’t need to stay fixated onto their owner’s faces until they hear “okay.” After all, if they turn and look away from the approaching dog and get reinforced, what’s the problem with looking back at the other dog and providing another reinforcement opportunity when Watch is said again? Granted, there are some dogs who need to keep their eyes on their owner’s faces–the ones whose response to the sight of another dog is totally out of control for example, but most dogs do just fine if you teach them that the sight of an unfamiliar dog is the cue to look toward your owners and get a tasty treat or a session of play.

The other modification of the booklet is an emphasis on dropping out prompts or lures early on, in order to avoid a smooch or a hand movement from becoming the cue (instead of the word Watch). We wrote Feisty Fido in 2003, six years ago, and since then we’ve become much more cautious about owners inadvertently teaching a dog that the cue to turn your head is a smooch or a movement, rather than the word watch or an approaching dog itself. It’s so easy to say “Watch” and encourage what you want with a smooch or a movement and end up undermining the power of the cue you want to use. In the new version of Feisty Fido, we advise people to see first if their dog will turn his head just to the sound of the word itself. If that isn’t effective, we suggest prompting (with a smooch to get the dog’s attention for example) or luring (by moving food a few inches from the dog’s nose and luring it toward your face) three times in a row, and then saying “Watch” all by itself and waiting at least 3 seconds for the dog to turn toward you (and then JACKPOT if he does!) This is effective for all but the most distractable of dogs (note one is doing this at the first stage of training in an area with no or few distractions, and never around another dog!).

Those of you operant trainers know that in a ‘purely’ operant modality one would not use a prompt or lure at all, and merely wait for the dog to turn his head toward the owner. In my experience, this requires far too much time and patience for most people (okay, you’re right, ‘most people’ includes me), and that doing something to help the dog get reinforced early on is productive. However, as I learn and grow, it is increasingly clear how careful we must be to not let prompts or lures become the cue themselves. When I read what we wrote in 2003, I can’t help but want to revise it.

Of course, I want to revise just about everything I write as soon as it comes from the printer. I am lucky in that early on in my career, I heard Terry Ryan say that every author has to be prepared to disagree with something she wrote as soon as the ink dries. Oh my was she right. I’ve gone back and looked at things I wrote twenty years ago and… well, never mind.

Speaking of a long time ago, we’ve had a sale on the Advanced Canine Behavior Seminar DVD and it flew off the shelves. It was recorded in 2001, and I have to admit I’m curious about what’s on it! I swear I don’t remember… If anyone has watched it and wondered: “Does she do that anymore….” or something similar, don’t hesitate to ask in a comment. Someday I’ll get the nerve up to watch it myself.

Meanwhile, back at the farm, it’s summer now, humid but still rainy, green and lush and fertile. The peony flowers are falling apart, looking like blousy ‘ladies of the evening,’ with too much make up on. The daisies are rioting white and yellow and the wild black raspberry bushes are full of tiny fruit buds. Willie and Lassie were so glad to see me when I got home Tuesday night from Maine that I’m still all oxytocin-y about it. Martha the older ewe still isn’t right, even with a different anti-biotic and wormer, but her lamb is thriving, as are all the lambs, who doubled in size for the five days that I was gone. Okay, maybe not quite that much. Jim finished the carport beside the garage, and it looks stupendous. What a guy. I may be able to turn around a problem dog, but anyone who can build an entire wooden structure that doesn’t fall apart in a few days is a miracle worker in my opinion.

After all that I should send you photos of the farm, but I haven’t taken any since I got back. Here are two photos from New Hampshire, one of Squam Lake (of “Golden Pond” fame) and one a typical forest stream that feeds the lake. They make me smile just to look at them, remembering how peaceful they are in person. What is it about water that is so relaxing? 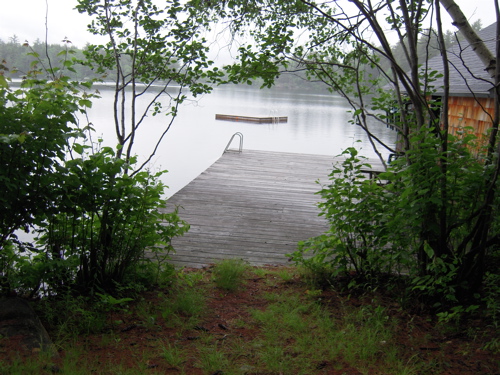