Welcome to an ongoing inquiry about the behavior of people and dogs.
Blog Home >> Animals and the People Who Love Them >> Female Dogs More Attentive than Males?

Well, now, this is interesting. Corsin Muller at the Clever Dog Lab in Vienna believes he has found a sex difference in the attentiveness of dogs to the expected size of a ball. Dogs were brought into a room and were allowed to play with 2 balls, one big and one small. They then were taken out of the room while the researcher set up the experiment. When the dog returned, he or she saw a ball, on the left side of a visual barrier, that gradually moved to the right and eventually behind the barrier itself. After a pause, a same or other size ball appeared on the other side, as if the ball had continued to move to the right and had passed behind the barrier. The experiments scored how long the dogs stared at the ball that appeared on the other side. This is a standard paradigm used in studies on pre-verbal children. Researchers have found that infants and young children look longer at something that surprises them, and this method has given us insight into how their minds work at different stages of development. (Ex: some species of primates and young children stare longer at two versus three balls rising from behind a curtain, if they saw three balls descend behind it seconds before.)

What surprised the researchers at the Clever Dog Lab was that female dogs behaved as if they were surprised by a different size ball appearing where they expected a smaller or larger one to show up, but male dogs did not. A write up of the research appeared in Science, you can watch a video of a test there (although I found it difficult to see much myself). Their sample size was 25 of each sex, which seems like it might be adequate, but it’s hard to tell without actually looking at the data and knowing how large the variances were. (We’re looking for the study now here at the office, if anyone’s found it let me know.)

I have virtually no explanation for why there would be a sex effect (if there is, I’m still a tad skeptical). The researchers don’t appear to have any answers either, but when interviewed, Stanley Coren (How to Speak Dog and other books) suggested that females may have more of a need to keep track of things visually, like their own puppies.  Hummm, not so sure. I’ll admit that I can be a bit sexist some times, having grown up in a world in which women should be seen and not  heard, and I’d be fun to say “Yeah, females rock!,” but still… This one has me cocking my head. What about you? Think it’s a real effect here, or perhaps a glitch in sample sizes and some especially focused females? Or more easily distracted males? There does seem to be a general belief that males tend to be more distractable, (I found from a survey on the blog about whether males or females are “easier to train”) but there really isn’t any research on it that I know of.

MEANWHILE, back on the farm: It’s time for me to bring Snickers, Truffles and their three December lambs down to the barn. They have been up in the orchard pasture for the last week so that my young lambs could have access to the creep feeders. The two ewes have problematic udders, and so I am culling them from my breeding herd. I have vowed never to ship any of my ewes, and I’m so happy to report that I’ve found a great home for the flock as a “starter herd” for someone with a Border Collie. I am confident they’ll have a good home, be taken care of well and not abused by dogs in any way. Still, it’s always a bit hard to say goodbye. I’ve been fond of them, especially because their lambs are the surprise lambs born in December when we were in New Zealand. (And whose birth resulted in the now famous line from the husband of the sitter: “Honey, come quick, there’s a little white dog in with the sheep!” I hesitate to create cyber laughing at his expense, because the man is a dear, dear person and became a great shepherd while he was here, moving heaven and earth to keep little Ferdinand alive. But still, it’s just so darn funny….).

I’ve just returned from moving the flock to the barn. I managed to worm the ewes again without any help (I’m not willing to risk Willie just days before his surgery), but the lambs were another matter altogether. They are big and fast and Hans Solo darn near smashed me into pulp, so they’ll have to wait til tomorrow. Here’s what is now called the “Insta-Flock” (as in, an “Instant, ready-made flock), in the orchard pasture right before I brought them down. 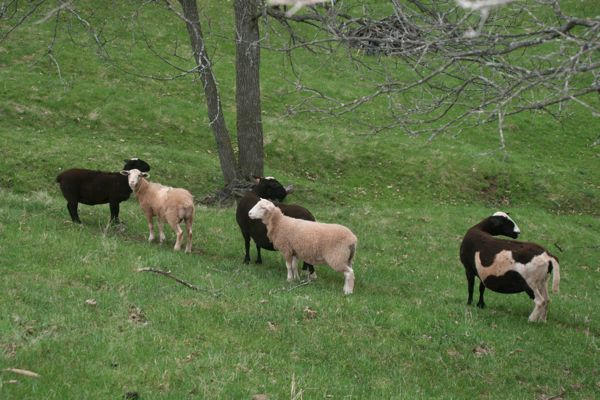 And here’s what the ewes were looking at: 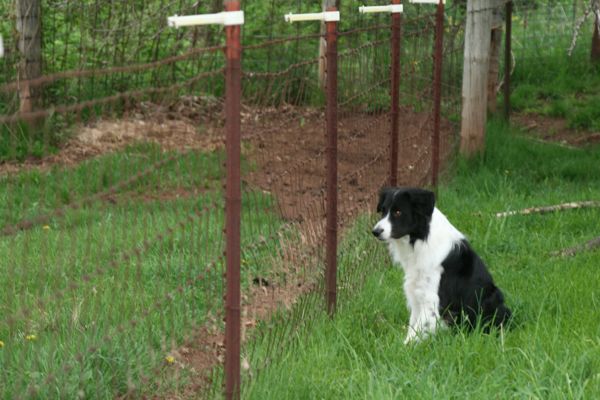 « A New Book: Dog Sense by John Bradshaw
The Power of Pee »