Welcome to an ongoing inquiry about the behavior of people and dogs.
Blog Home >> Cats >> Feral versus Fearful Cats

Our resident cats, Nellie and her daughter Polly, arrived almost two years ago thanks to friends who found a starving, half-dead adolescent cat in their yard. They took her in and nursed her back to health–which included discovering that she was pregnant, helping her raise five kittens and finding them all wonderful homes. No one ever wondered if Nellie had been a feral cat: She walked up to the first person she saw and began rubbing and purring, behavior that she continues to this day. If you came to visit the farm she would behave as if you are the most wonderful thing that has happened to her all week. Nellie, the feline Labrador.

That same summer, as some of you may remember, I also had a pregnant cat show up on the farm. She was so secretive that I didn’t know she was there until I saw the tail of a three-week old kitten disappear down a hole in the barn. (You can read the first part of the story here and learn more about how to manage feral kittens here.) I eventually trapped and found homes for 4 of the kittens, and hoped to socialize momma and keep one of her kittens as barn cats. The rodent population was exploding in the barn and I needed help. It’s never good when you walk into your barn and a rat stares directly into your eyes and doesn’t even try to scamper away. But this momma cat had other plans. After recovering from a spay surgery (thanks to Dane County Friends of Ferals), she did all she could to lure her remaining kitten away from the barn into the woods. She was literally like a wild animal: she did her best to stay hidden from us, and always ran away if we happened to find her out in the open. No amount of tossed chicken or patient sitting beside her kittens was enough to lure her toward us. So who could blame her? From her perspective, I killed 4 of her kittens, then trapped, terrified, and mutilated her. Not a good first date.

Two pregnant female cats, two very different stories. One well-socialized cat who is currently loved and cared for, and one unsocialized, clearly feral cat who melted into the woods and hasn’t been seen since. But what if both of those cats had been trapped and taken to an unfamiliar place, perhaps a rescue or a shelter? How differently would they have behaved then? Both cats might have been extremely fearful for the first few days, so how would one distinguish a truly feral, unsocialized cat from one who is afraid of a new environment but is comfortable with people?

The authors evaluated almost 300 cats in a shelter setting for 3 days and evaluated their behavior over 4 observation periods. Some cats were owned and well-socialized and just “loaned” to the shelter for the study, while other cats had been found as strays. They conducted behavioral assessments that included extending a hand toward the cat, jiggling a toy in front of the cat and stroking it with a spatula (a firm but flexible object).

Here is a brief summary of some of their findings, but you can read more about it and also watch a free webinar from Dr. Slater about the study on the ASPCApro website. I watched it last week and found it fascinating.

Some behaviors that might seem relevant were not good predictors of whether a cat was socialized or not. For example, growling and hissing, especially on the first day, was done by both groups of cats relatively equally. However, the study found that only well-socialized cats did any one of the following, even if only once in all observation periods: Chirp, Rub, Knead, Touch or Play. In other words, only the owned cats did any of those behaviors within three days of coming to the shelter. Thus, two cats could huddle in the back of the cage, hissing and growling on day one, but if on day three one cat chirped to an approaching person, began to rub against the spatula or play with the object, then you could accurately assume it was indeed a well-socialized cat who had been someone’s pet. This then, would indicate that once it had become comfortable in a new environment, the cat would do well as a pet in someone’s home. Truly feral cats are simply never going to flourish in a busy household, and deserve not to spend the rest of their life hiding under someone’s bed. Exactly where IS best for them depends on many factors, but a home with five children under the age of 12 isn’t going to be a kind solution for a truly feral cat.

MEANWHILE, back on the farm: This is all highly relevant, because there are now three, count them THREE, stray cats visiting the farm with increasing frequency. A black, a black and white, and a creamy orange who I recently saw strolling into my garage as if he owned it. Sigh. I will be checking with neighbors soon, and at least making sure that the cats are spayed or neutered. If not, and if they are truly strays, I’ll trap them and have them neutered. We don’t need any more feral cats wandering the woods in southern Wisconsin.

Our cats appear to be thrilled that the weather has moderated. They are spending lots of time playing with each other and dashing up tree trunks. But they still love sleeping in the garage. Here’s Momma Nellie in her “igloo,” where she and Polly spent much of the winter curled up on top of the heating pad we added once the temperature went under zero at night. 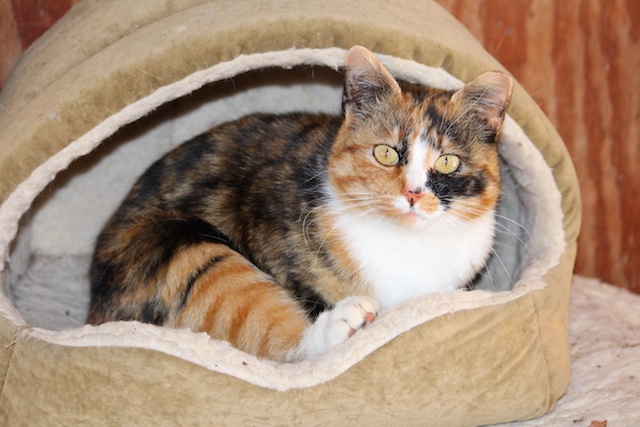 This is not exactly a typical portrait of a cat, but I was intrigued by Polly’s ability to turn her head almost 180 degrees with little visible effort. I keep looking back at the photo to help my brain sort it out. (Don’t worry, her head didn’t keep going around 360 degrees. An exorcism was not required.) 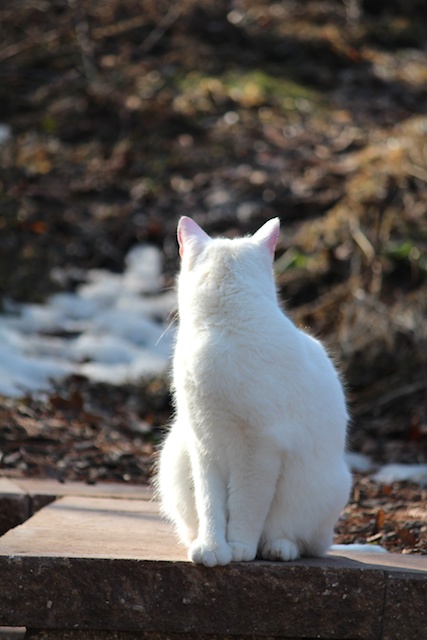 « The Beauty of the “Ready” Cue
Meet Maggie »