Welcome to an ongoing inquiry about the behavior of people and dogs.
Blog Home >> Border Collies >> fMRI on Dogs: Too Wonderful!

When I was doing my PhD research in the 1980’s I wanted to see how a dog’s brain responded to different types of sounds before and after training. This was in the 1980’s, and the only method available for animals was to do Evoked Potential tests, in which simple, tiny electrical sensors were glued to the scalp. This allowed one to measure activity in the brain in an extremely general way: What kind of brain waves does one see in the Temporal versus the Parietal lobe, for example, after hearing or seeing specific stimuli?

Evoked Potential tests are logistically easy to do on adults: You shave tiny areas of the scalp, glue on the sensors, and ask the subject to stay still for a set period of time. The research subject mustn’t move, because muscles move through electrical stimulation in the brain too, so any movement confounds the brain’s response to external stimuli. But how do you do it on dogs?  How would you keep them still? Absolutely motionless? And here I was in Zoology, not neurobiology, so how would I pull this off?

I felt lucky to be at a large research institution like the University of Wisconsin in Madison, and so I reached out to neurobiologists in other departments. “How does one do Evoked Potential tests on dogs?” I asked. “No problem” I was told. “It’s not that difficult.” “But how do you keep the dogs from moving while you’re doing the test?” I asked. I received a blank face and a silence as an answer. “I don’t understand.” the expert informed me. “What do you mean?” I repeated my question. His answer, after another pause, was “We just don’t bump the tray.”

Slowly, with growing horror, I began to understand why he was confused by my question. I hadn’t asked “How do you do Evoked Potential on live dogs?” The dogs they used for their research weren’t alive; they were killed and the tests were done immediately after their death. Not what I had in mind, needless to say. I left his office and found a researcher (Dennis Molfese at Southern Illinois University) who did Evoked Potential tests on human infants. We did use small dosages of Acepromazine to quiet the dogs, but also did lots of training, and had few problems keeping the dogs still. We ended up with good results that showed dogs paid more attention to short repeated notes when linked with recalls than long, continuous notes.

You can see then, why I am thrilled to read that researchers have now pulled off doing fMRIs on happy, healthy, live dogs. Scientist Berns and others in Atlanta worked with owners to train 2 dogs to sit motionless in an MRI machine for 10 seconds at a time. If you’ve ever had an MRI, you know that this requires far more than just lying still. For reasons once explained to me while I lay frozen with fear in a tight, dark tunnel, the magnetic part of the MRI creates an ear splitting series of pops and bangs and groans that is hard for many people to sit through. And yet, they pulled it off with dogs, and got some interesting results.

“The task was designed to determine which brain circuits differentially respond to human hand signals denoting the presence or absence of a food reward.” And sure enough, when a visual signal was given that meant food was coming (not unlike a clicker stimulus), the ventral straitum of the caudate cluster was more active than when a visual signal meaning “no food coming” was seen by the dogs. Activating the ventral straitum causes the release of dopamine, the “Oh Boy!” neurohormone mediating happy anticipation. It’s the same neurochemistry that occurs when you get your dog’s leash and she begins to dance in anticipation of a walk.

The results are interesting, but not earth shaking, given they were exactly what was expected. What IS earth shaking is that scientists have found a way to study what happens inside a dog’s brain in kind and compassionate ways. This is huge…. the amount of information we could derive from this is immeasurable. I have long said that our relationship with dogs provides us with research opportunities unlike any other, and here’s proof of it.  Stay tuned… the next couple of decades of research and our understanding of other animals are going to be absolutely amazing.

MEANWHILE, back on the farm: The lambs are thriving, the dawn chorus of bird song floods into the farmhouse around 4:30 am, but who could mind such a beautiful way to wake up?

And although the weather has been challenging of late, (hot, cold, wet, no rain, too much rain, you name it), the flowers continue to lift me up and make me happy. Here’s an Iris I planted last year, first time seeing it bloom: 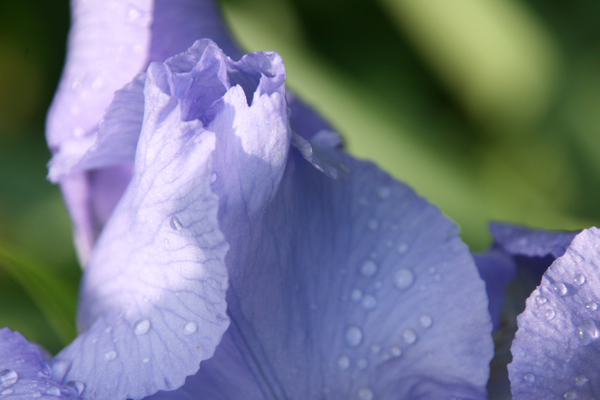 « Are Military Dogs “Equipment” or “Members”?
Dogs and People Both Achieve the Runner’s High »