Welcome to an ongoing inquiry about the behavior of people and dogs.
Blog Home >> Animals and the People Who Love Them >> Food Preference Tests in Our Own Homes

Want to join me in doing research on our dogs’ food preferences in our own homes? I was inspired by a section in Linda Case’s book, Feeding Smart with the  Science Dog, that I wrote about in my last post. Somehow I missed a section on food preference research when I first went through the book, but became enthralled as I was reading through it a second time. (I apparently require multiple trials to get anything down correctly.)

The research is based on “preference ranking tests,” in which nutritionists used “food-dispensing toys” to allow dogs to choose what kind of fat, protein, or carbs that they preferred. Simply, they taught dogs that the hollow toys would be stuffed with different kinds of food, allowed the dogs to sniff each toy, and then to select which one they wanted out of the toys presented side by side, in a random order, 2 meters from the dog. The dog was allowed to get the food out in any way they pleased and then move on to the next one. The dog’s preferences were then recorded for five trials.

The research that Linda quotes,  “Preference Ranking Procedure,” (Wyant, Aldrich & Koppel), was specifically looking for preferences in types of fats, proteins, carbs, and combinations there of. You can get the details in Linda’s book, but the researchers found that fish oil was the dog’s favorite fat, chicken liver the preferred protein, potatoes the favorite starch. Beef was high on the list of favorite proteins while pork was at the bottom.

I thought it would be fun to do my own version at home (as Linda suggests). Maggie and Skip would like to agree, having snarfed up lots of food in their dedication to the advancement of knowledge. I did a quick and dirty version, using kibble from a local pet store. I chose varieties that varied quite a bit in composition and perceived quality. As you’ll see there, there are lots of confounding factors that makes this kind of research tricky, but I thought it would be fun to see what came out of it.

With the dog on a sit/down stay (their preference), I let them sniff each bowl briefly, then put the bowls down about 6 feet in front of the dog, about 4 inches apart. I varied the position of each brand, using a random sequence generator.

Then I released the dog, picking up the other 2 bowls as the dog ate the one it chose. (Note this varies from the study, in which the dogs were allowed to get the food from all 5 toys; the order in which they chose was the preference.) Here’s what my trials looked like:

I did two sessions a day, with three trials within each, starting on Saturday the 5th. Here’s are examples of my highly sophisticated recording devices:

T stands for trial, L for left, M for middle, R for right (from the dog’s perspective). I always put the bowls down in the same order, L, M, R.

What you see is from the weekend, 2 trials a day. Note that Skip has a strong location preference, which is probably explained by the fact that, unlike Maggie, he hasn’t learned to sniff on cue. He’d always sniff the first bowl, then look uncomfortable about sniffing the second. It’s not surprising in a way, he was told to “stay” after each sniff, and I’m guessing he was confused about what he was supposed to do, and never really sniffed the other 2 bowls. Maggie, on the other hand, had it down instantly. She never went to the bowl on her left (first sniffed, first put down), and split the middle and right-hand bowl 6 times each. She chose Orijen 6 times, American Natural 3, and Purina 3. Is this enough to show a preference? Not yet! I’ll keep it up and give you an update next time I post.

The primary result is that the dogs and I had great fun, which was great, given that it’s an infirmary around here. Both Maggie and Skip came up lame and have been restricted from play and working sheep. That said, can we say anything about these preliminary results? Nope, not really, because there were so many confounding factors. Did my picking up the “not-chosen” bowls  influence the dogs’ behavior? Did doing it at different times of the day, and thus, different hunger levels, have an influence? Skip did not have the luxury of learning to sniff on cue, which Maggie did. (Note the dogs had a training period in the study, whereas I just jumped right in.) In spite of all these holes, and that it’s all too sloppy to be good research, it’s still been fun. What I most love about all this is the reminder how “simple” behavior studies look superficially, but how very difficult it often is to get robust, meaningful results because of so many confounding factors. If you are going to play, be sure your dog is first familiar with sniffing on cue, and staying in place on cue (or held on leash by someone else?). Vary the placement of the bowls and which one gets put down first, and don’t vary the distance between the dog and the bowls, or between the bowls. And have fun! Why not?

Let us know if you’ve done anything similar, or are inspired to take it on yourself. It’d be rough to pull off if your dog didn’t have a good stay and you are alone, but you could always enlist a family member or friend if necessary. And hey, if you’re living with March Mudness, like we are, then the more fun you can have inside the better.

MEANWHILE, back on the farm: It was Skip’s fifth birthday on Sunday!! It’s hard to imagine he’s this old–it’s always trickier when you get a dog who’s not a puppy, right? He was three when we got him, and I struggle to get my brain around the fact that he just turned five. He is having no problem with it himself, having gotten an extra Kong stuffed with frozen food, as he and Maggie do every night after Jim and I eat dinner. But today he got a second one mid afternoon. Please do not share this with Maggie. 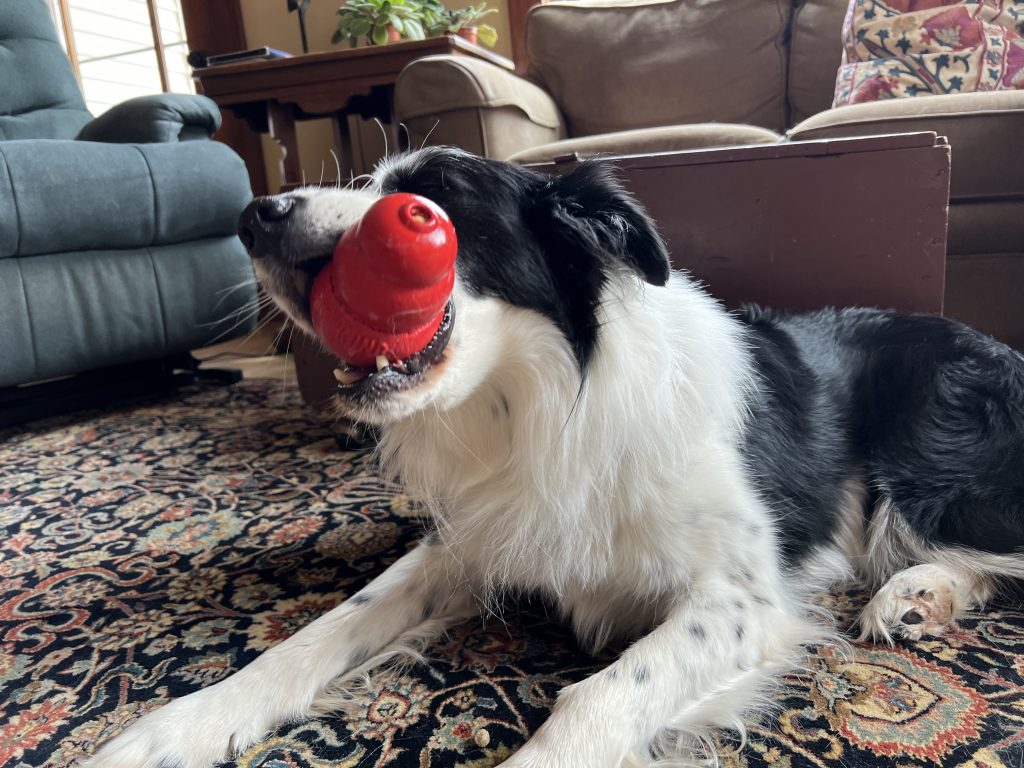 Besides fun with food preferences, it’s pretty much an infirmary around here. Ask the dogs how much fun they’re having: 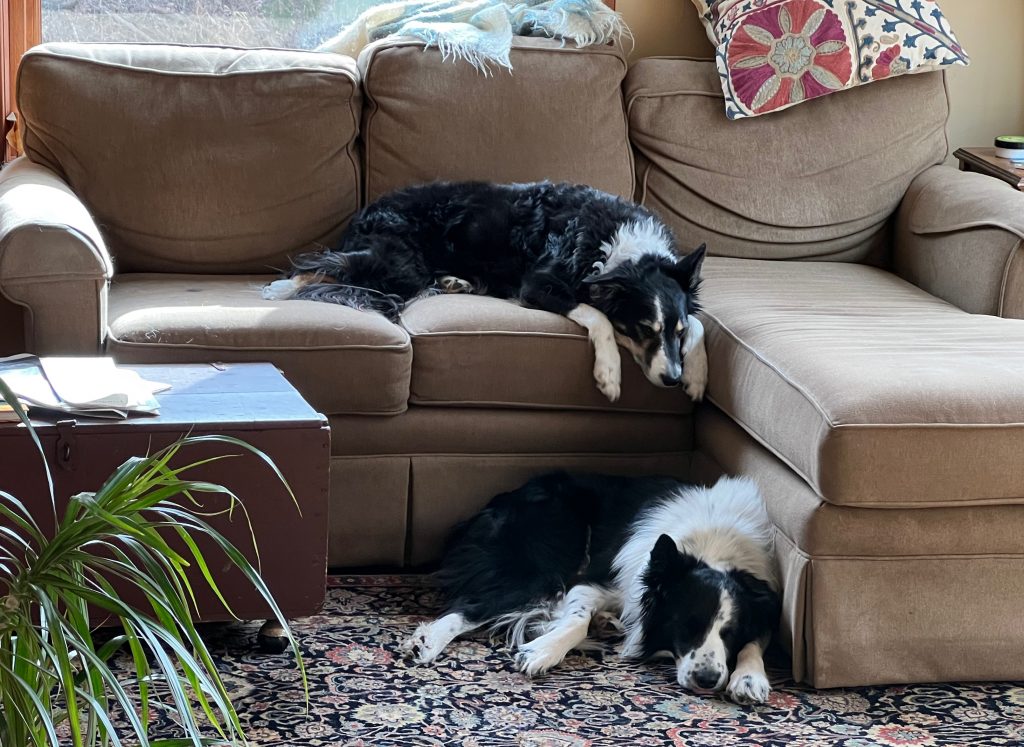 Maggie is healing well from what looks like a cruciate strain, but is still not allowed to play or work sheep. Skip missed her as a playmate, but was having a great time working sheep every day until last Tuesday, when he worked sheep in the morning (hard work in the pen, lots of “quarter-horsing”) and then ran like a race horse in the afternoon with Churizo, a five-month old husky/wolfhound cross. Here are some photos of their play session. You can see that both dogs were a bit unsure at times: 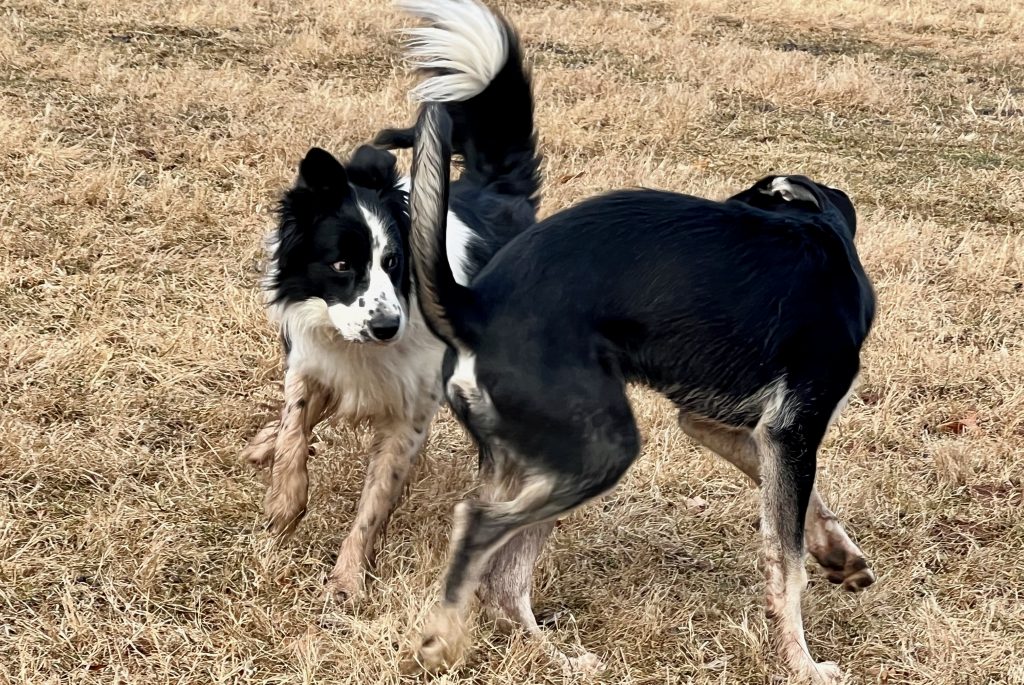 But they both love to play by running, and run they did, Skip gathering mud like the sponge that he is. 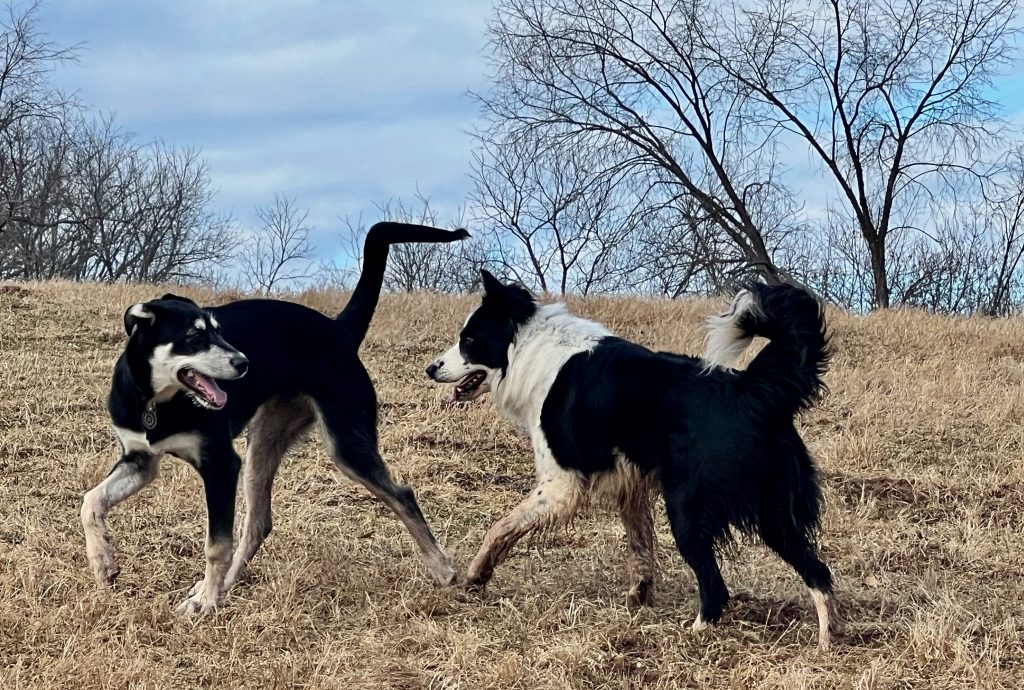 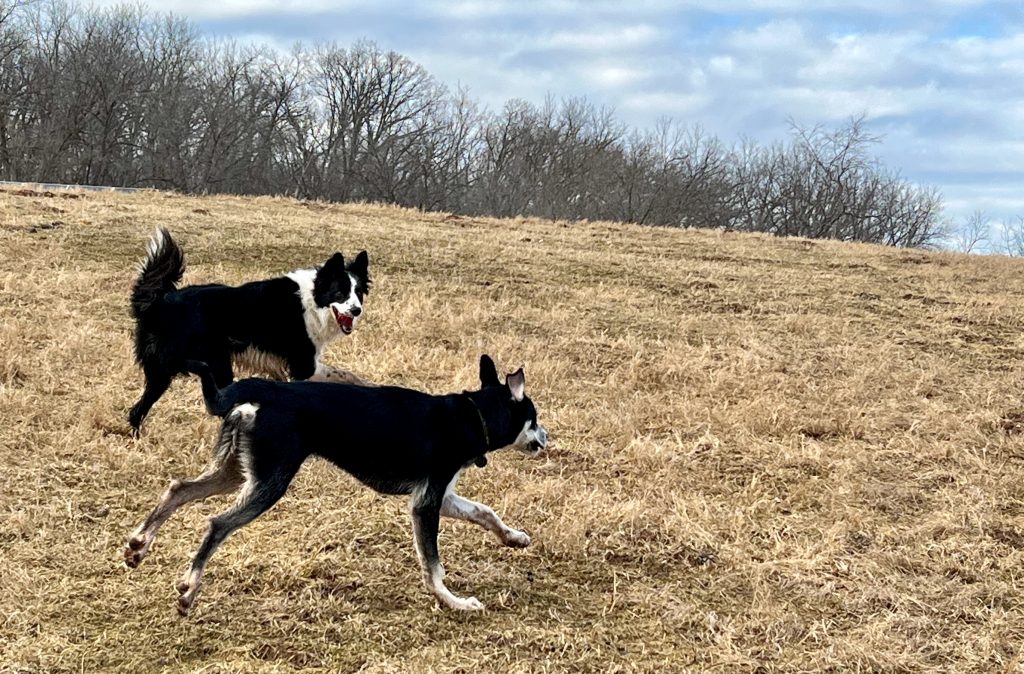 I love this last photo, even though Churizo is leaving the frame. It shows Skip’s intensity, which became, uh, extreme, when it became clear that Skip was falling in love with Churizo and wanted to have his way with him. I actually had to put him on a leash on the way down the hill because he wouldn’t leave the poor pup alone. 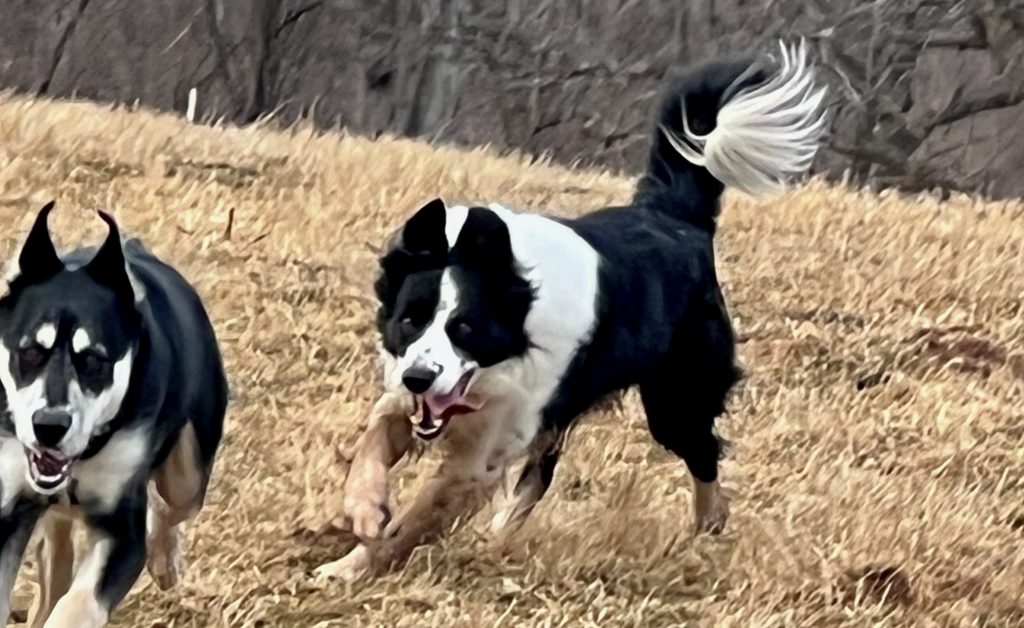 Skip came up lame later that afternoon, putting no weight on his right foreleg. The poor guy has been highly restricted ever since, and thank heavens is healing well. I suspect it’s his shoulder (though no swollen or hot joints), and look forward to working this afternoon with the Walk-on-Water Physical Therapist at UW-Madison, Courtney Arnoldy. I’ll keep you posted, but I’m encouraged by his rapid improvement, perhaps thanks to lots of rest and 3 laser treatments.

I was going to leave you with some photos from an orchid show at Olbrich Gardens in Madison, but even though I avoid talking about current events in this blog, I am ending with sunflowers, the national flower of Ukraine. I do a “loving kindness recitation” for them every day, and am sending money almost as often. I apologize for bringing this issue into what I know is a respite for many, but I just couldn’t stay silent.

May the brave people of the Ukraine be safe and protected.

May they feel surrounded by care and concern and admiration.

May they live in peace again soon. 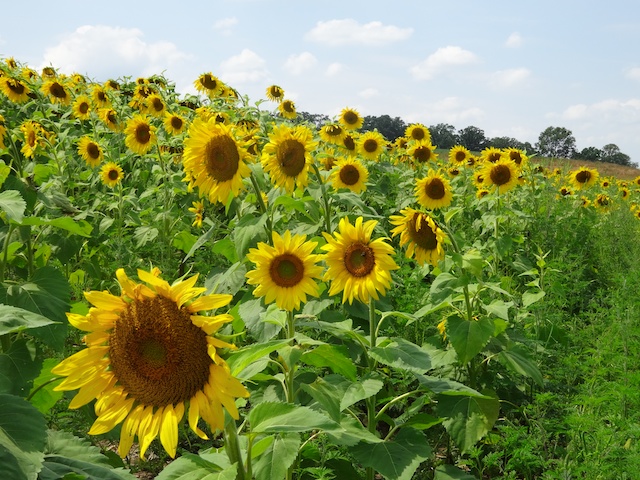 May we all, including our beloved pets, be safe and protected.

« Feeding Smart–Book Review
Is It OK to let your vet take your dog to “the back?” »