Welcome to an ongoing inquiry about the behavior of people and dogs.
Blog Home >> Animals and the People Who Love Them >> Go Ahead, Play Hard to Get

Growing up in the 1960’s, girls like me were advised to “play hard to get.” (I notice now that the phrase was not “be hard to get,” but “play hard to get.” Sigh.) This, we were told, would make us more attractive to boys. I had no trouble with this in high school, because the only thing I wanted to play at was being around horses, and the only boy interested in my skinny, gawky body was a Physics nerd who thought it was cool that I kicked ass in algebra. We went to Prom together and shook hands after it was over.

As awful as the “hard to get” advice sounds to me now, the fact is that scarcity, or its allusion, makes anything more valuable. Female Redpolls, plain brown birds with a tiny red cap,  get ooohs and aaahs when they appear here in Southern Wisconsin, because they are rare. The magnificent Blue Jay, one of the most beautiful birds in North America, barely gets any attention because it is so common. The examples are endless, and easily found in advertisements: “Going out of business!” “Two days only!” “Only two left in stock!” Black Friday is the ultimate example: Limited products, one day = Scarcity. 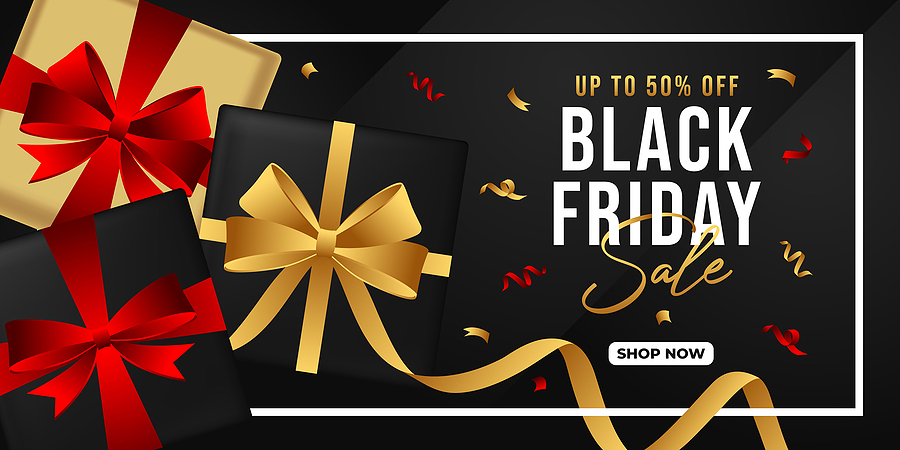 But does scarcity, or playing hard to get, have the same effect in other species? My experience suggests it does, but I’d love to hear what you think. Here are a few of my anecdotal observations and how I use it with my dogs:

PLAY: Do you have a dog who is so/so on a particular toy? Perhaps the one you spent a fortune on that your dog ignored? What if you tried handing it to your dog and then snatching it away at the last moment before he got his mouth around it? Maggie can be on again/off again about some toys in some situations, and if I want her to play when I need her to exercise, I’ll pretend to give a toy to her, but pull it away two or three times before she has a chance to reject it. She also loses interested in the ridiculous expensive antlers I buy her, when there is plenty left to chew on; a brief hard to get game can pique her interest. If your dog really doesn’t want to play, or seems bored by a particular toy, give this a try if you haven’t already. (This works with dogs who are picky about treats too.)

Here’s me teasing Maggie with her bone this morning:

Here’s Maggie a few seconds later (after another teasing session):

PILLS: I wrote in January of 2015 about a variety of ways to get a pill into a dog, including this method:

The One Two Three Game: First, encase the pill in some highly palatable food, perhaps a piece of chicken or some peanut butter. Put it aside and give the dog a treat with no pill. Then give the dog a second treat. Next, pick up the treat-encased pill and put it right next to your dog’s nose, but don’t let him eat it! Pull it away, as if to tease him. Move it within an inch of your dog’s nose/mouth again and snatch it away a second time. Move it a third time toward your dog’s mouth and let him eat it. Follow it up with a fourth treat, this time with no pill. Unless the pill is truly noxious, this works really well and makes the entire exercise great fun.

I italicized the “hard to get” part, which I added in after learning the 1-2-3-4 treat, treat, pill, treat method from friend and colleague Laura Monaco Torelli. You can punch up the “scarcity” factor even more if you have other dogs. One regular treat to the dog who needs the pill, three to the other dog, eventually adding in the pill somewhere in the mix. The faster you do this, the better it works. Note: If the pill is easy to swallow and not distasteful, there’s no need to cover it with food.

RECALLS: Pippy Tay, one of my sweetest and dearest Border Collies, went through an adolescent period of taking off in the woods after wildlife, ignoring any calls to stop or come back. Not safe, not okay. This was a behavior I had to get turned around fast before it became a dangerous habit. I was lucky to be walking with other dogs during this period, so I’d wait until they were all well in front of me, (but not chasing anything), and clap to call them all back to me. The first dog back got multiple treats, the second a few tasty morsels, but the last dog? Oh dear, it seems I always ran out of goodies before the last dog arrived.  That last dog was always Pippy because she tended to range so far ahead, but I made sure that she was close enough behind to see the other dogs getting treats. When she arrived, I sympathized, and told her how sorry I was that she missed out. I can’t begin to speculate what was going on in her mind, but her behavior and body language suggested to me that she was crushed. (It should be noted that Pippy loved food like life itself.)

You might think that this would back fire, in that she wasn’t getting reinforced for coming when called. But she stopped ranging so far ahead, and seemed to have one ear cocked backwards, listening for me to call the dogs back. I did reinforce her if she made a valiant effort to get back to me fast, and eventually she stopped ranging so far ahead. Adolescence passed her by, and she developed a dynamite recall, even if she flushed a deer that took off right in front of her. It’s just an observation, and it could be incorrect, but my sense was that knowing that the treats were “scarce” had an important effect on her at a critical time.

I suspect there are lots more examples of this than the three above. I’d love to hear your take on this. Has “hard to get” cropped up in your dog’s experience? Ever used it on purpose for medicine, recalls, or object play?

MEANWHILE, back on the farm: Back from a brief get-away to Michigan, to a perfect, quiet cabin in the woods close by to good friends Peg and Jim. We were hyper Covid-careful, only visiting at a distance outside, except for brief, masked too-short moment cooing over two-week old puppies. Not surprisingly, it was a tad nippy, given it was mid November. Two of the three days were in the 30’s; the first day had 20-30 mph winds and a high of 36, but Peg is oblivious to weather, besides being a brilliant sheepdog trainer and coach, so we worked outside several times each day. She had some great ideas for my work with Skip, and I have my agenda for the winter mapped out. I am more grateful than I can say that she is so generous with her time and expertise.

After one session Skip tried to turn a bucket into a water tank. This was the best he could do: 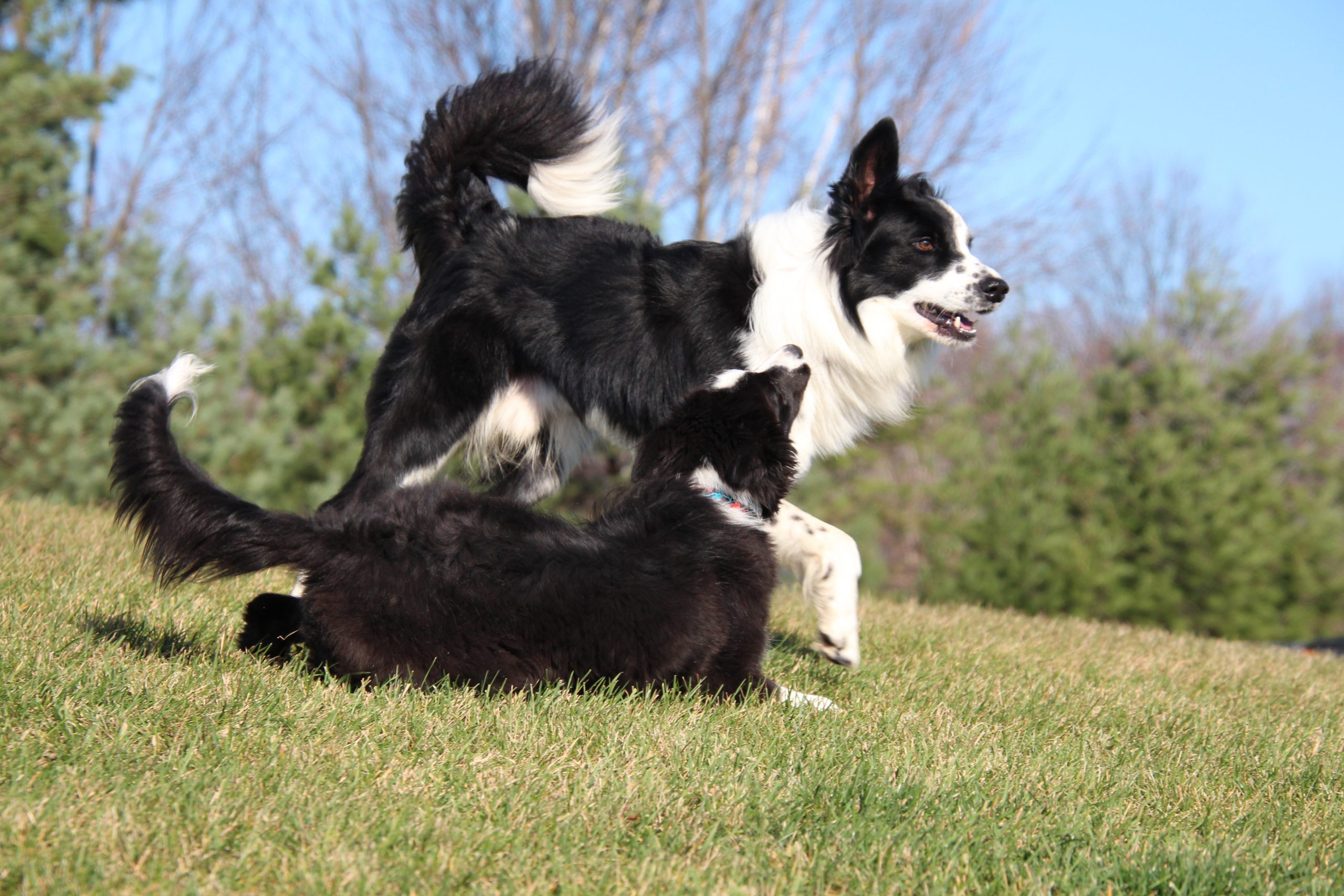 Maggie practiced telling him to back off: 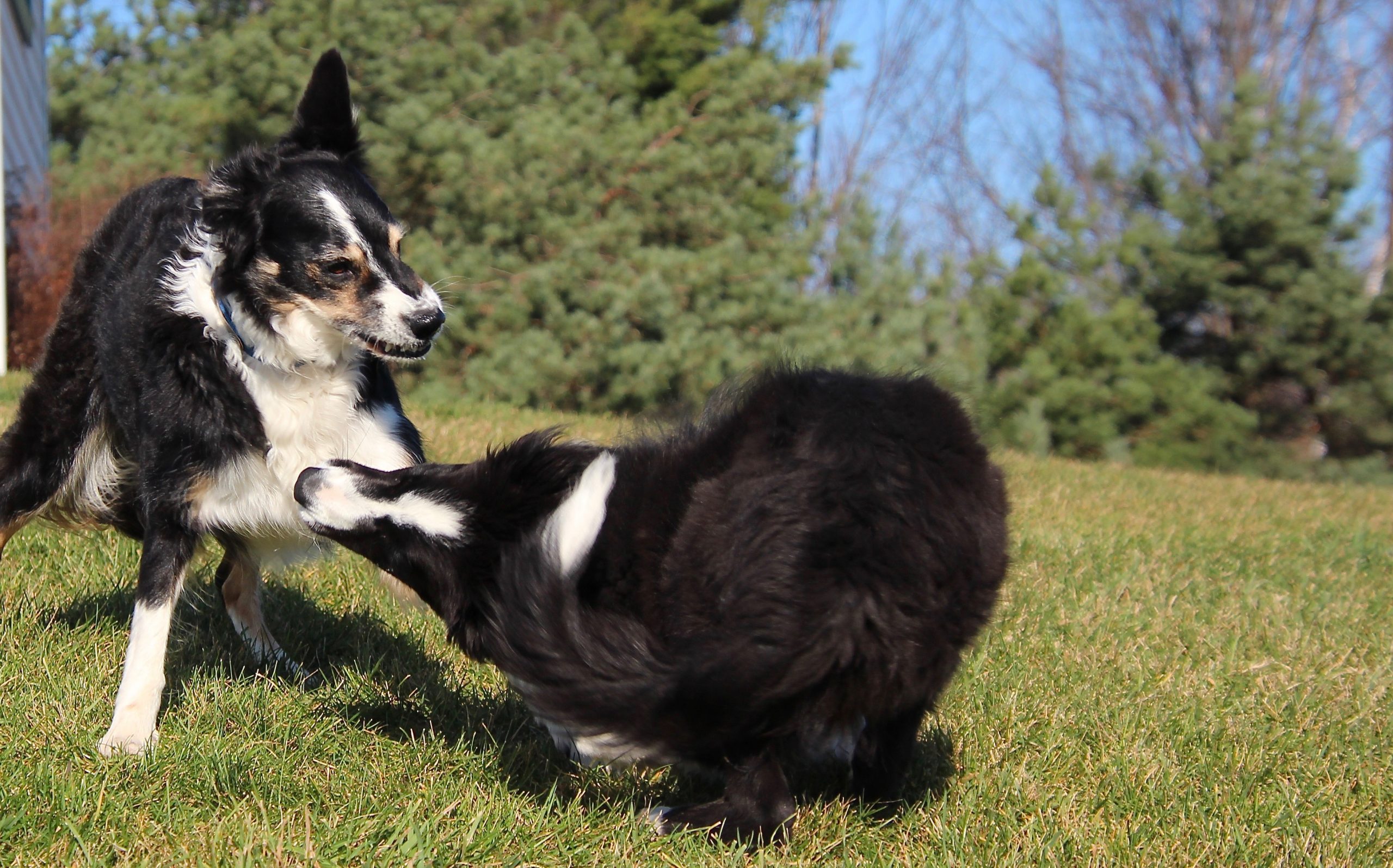 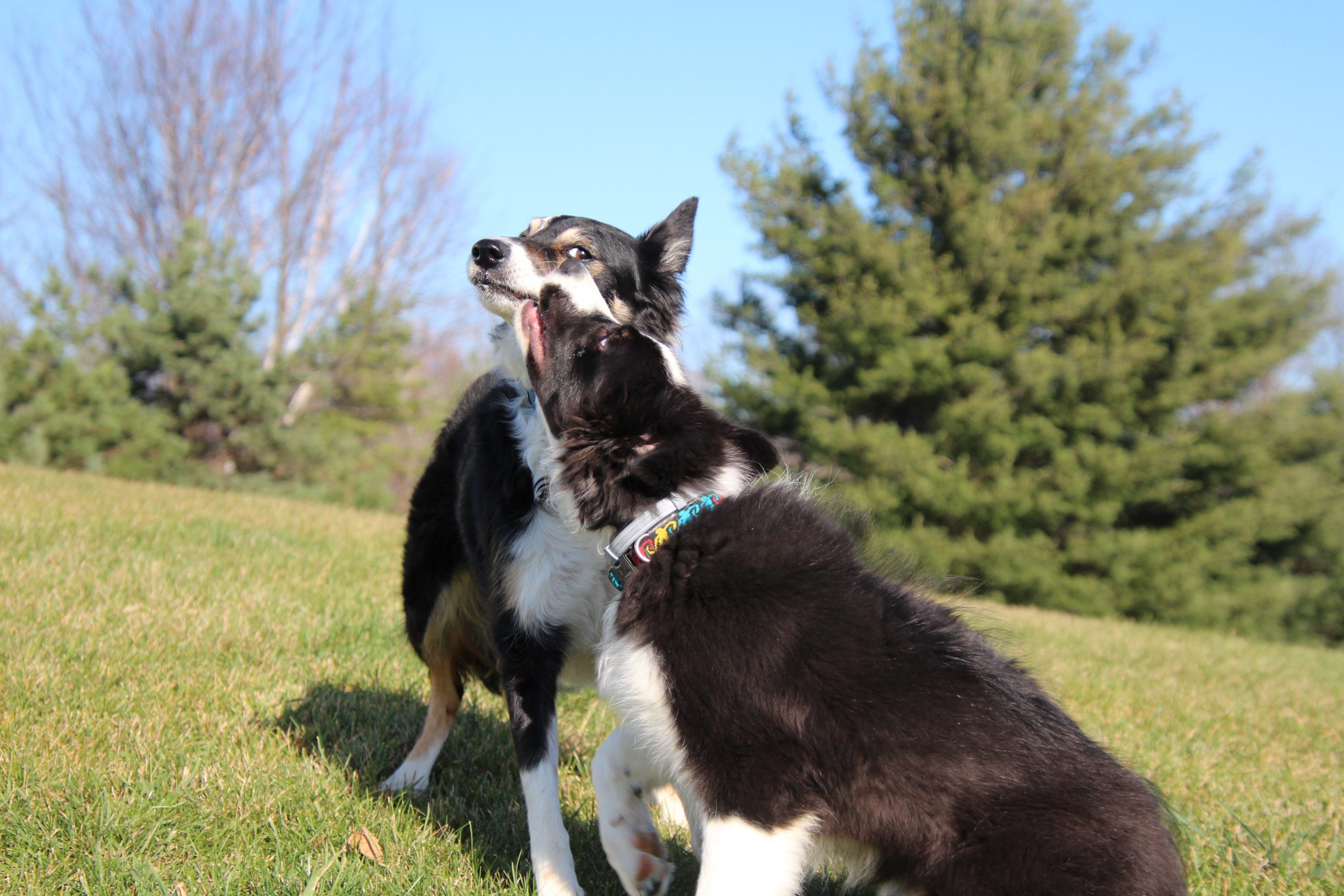 Dan is mature enough to read the writing on the wall–he lay down after this tooth flash and thumped his tail. 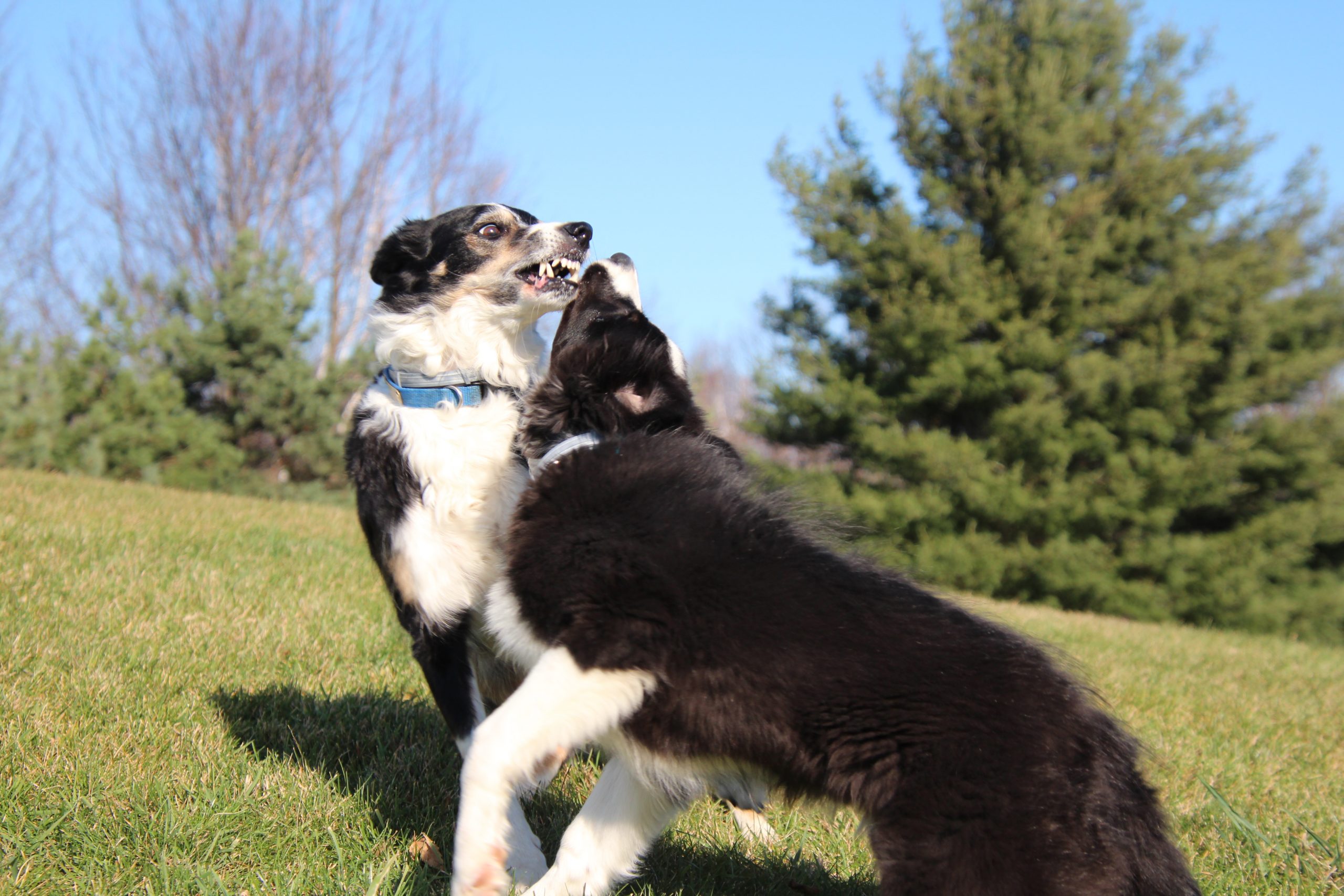 My guys on a sunny day. Lucky me: 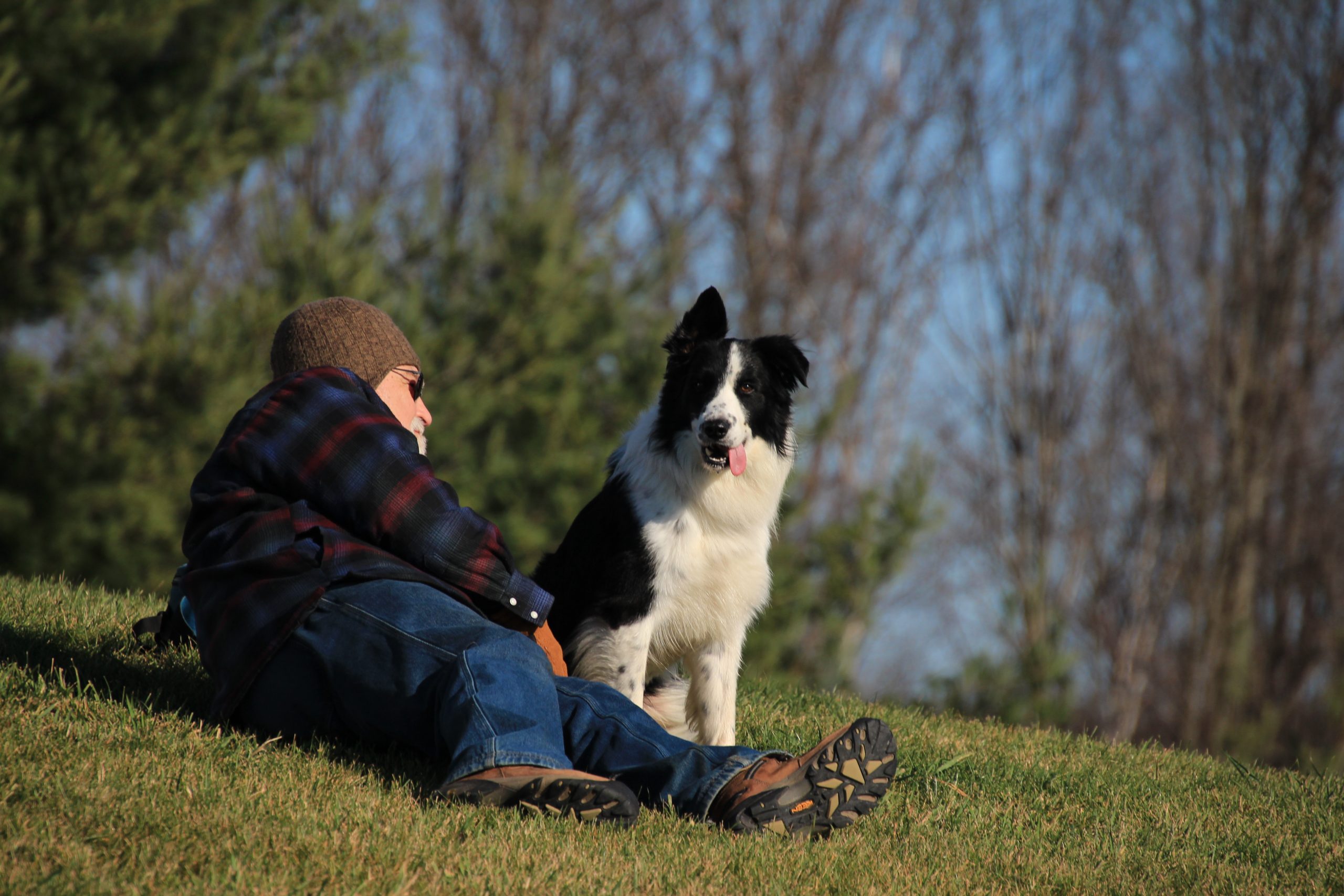 Here’s the sunset off our cabin’s deck Wednesday night. I did not enhance the color of this, this is exactly what it looked like. 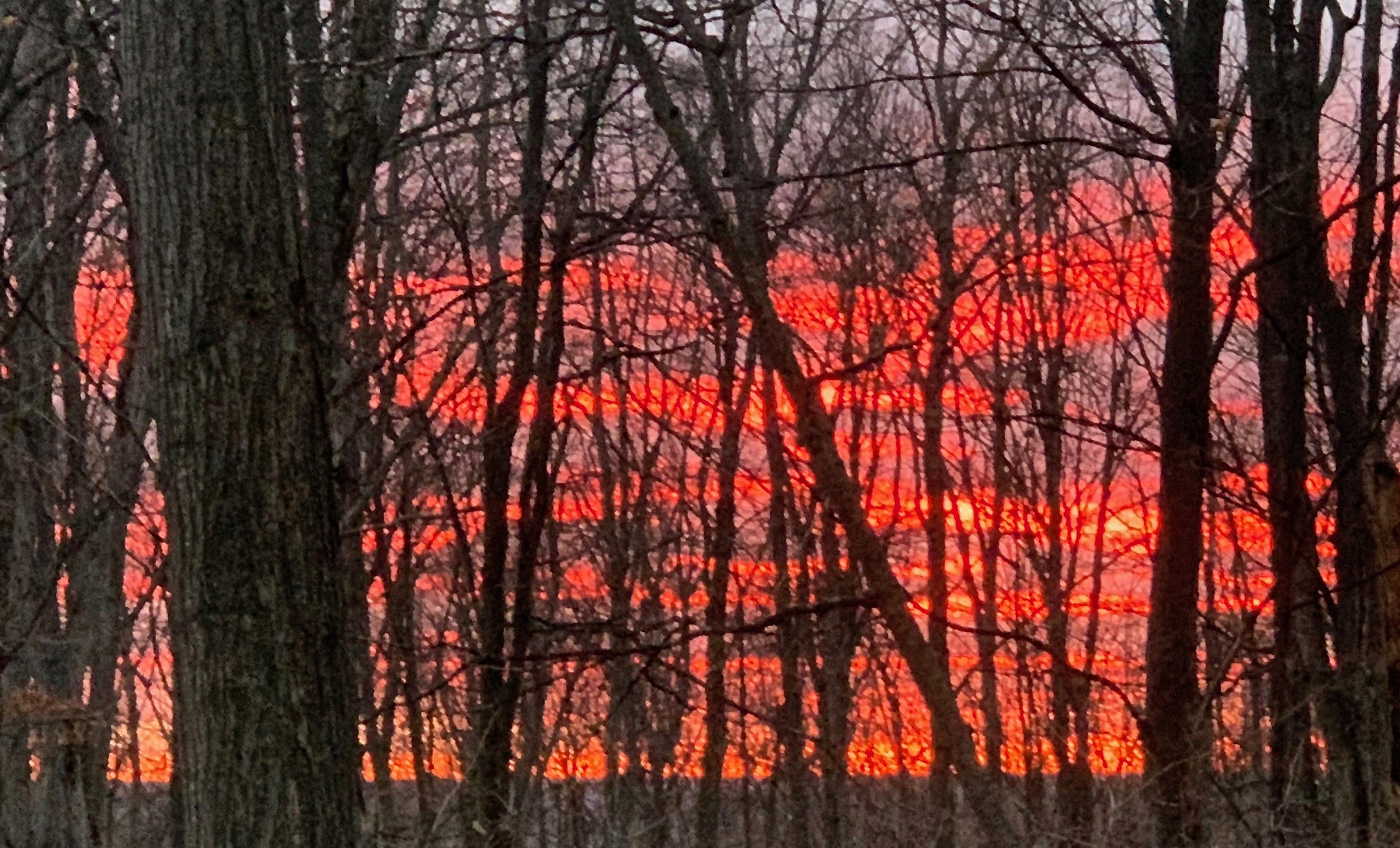 Now we’re home sweet home, pretty much back to sheltering at home now that things are so bad in Wisconsin. Cold and rainy Sunday morning was a perfect time to turn mushy bananas into a yummy quick bread: 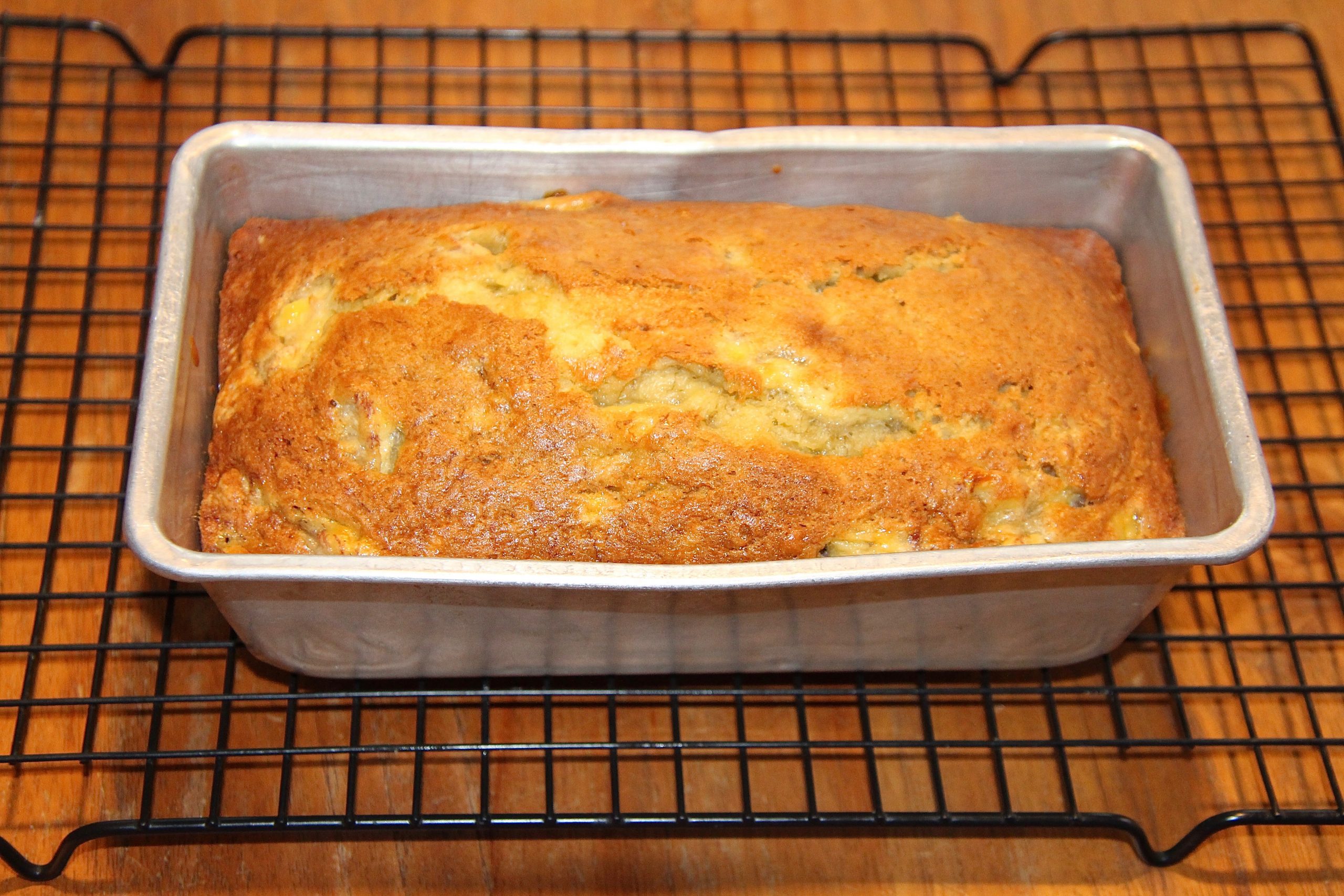 What’s cooking with you?

« Biology of Dogs: Book Review
Gifts for Us All for the Holidays »