Welcome to an ongoing inquiry about the behavior of people and dogs.
Blog Home >> Animals and the People Who Love Them >> Greeting Behavior and Separation Anxiety–Any Effects? 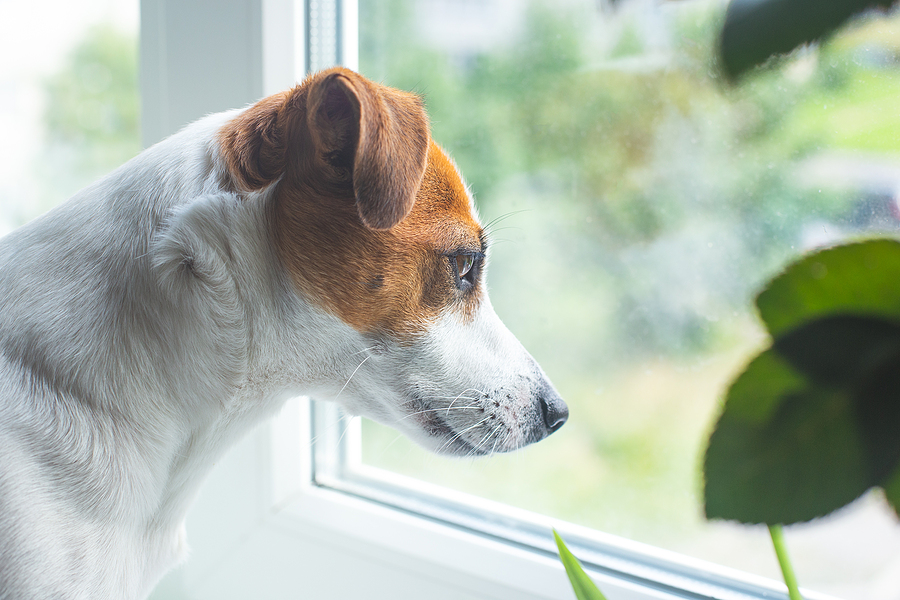 Having a dog with Separation Anxiety is no fun for the owner, and no doubt less fun for the dog. Mild cases include dogs who pace or whine for a bit after their owner leaves, while dogs with serious cases can injure themselves and/or destroy your house. I write about how to prevent and treat Separation Anxiety (SA) in the booklet, I’ll Be Home Soon, which I wrote after seeing how much suffering it can cause.

In the booklet I mention “quiet but loving comings and goings,” repeating the oft-given advice to avoid emotionally overloading dogs when you leave the house and when you return. The belief has been that dramatic departures or returns might be a factor is causing dogs to be anxious when left alone. I repeated that advice in a recent blog post about preventing SA, related to all the new dogs adopted during the pandemic. But is it really helpful?

You gotta love science for reminding us what we know, and what we don’t. Researchers in Texas tested whether high-arousal transitions create SA-like behaviors, or correlate with owners who have dogs with SA. The answer, in these studies anyway, is a resounding “possibly not.” Like all studies, these experiments had constraints, but they are still a valuable effort toward treating the problem of SA.

The two studies were done by Teixeria and Hall at Texas Tech University, and are published in the Journal of Veterinary Behavior, with the title “Effect of greeting and departure interactions on the development of increased separation-related behaviors in newly adopted adult dogs.” (Note: I’ve linked to it above but it’s not open access. You have to buy it to read it unless you are part of an academic institution. I’ll summarize it here for you so you don’t have to, if you’d rather not spend $31.50 dollars on one paper. [Sigh.])

One study looked at correlations between the frequency of SA and high-arousal versus low-arousal departures and arrivals. 1,990 owners responded to a 100-question survey designed to gauge their dog’s SA, or lack of it, and the owner’s behavior during transitions in and out of the house. 323 dogs had been diagnosed with SA by vets or vet behaviorists, 655 others had symptoms of SA according to their owners, and the other dogs had no behaviors that suggested SA. Importantly, owners with dogs with SA were asked how they initially behaved when coming and going when they first got the dog, and how they behaved after the dog developed or was diagnosed with SA. Because calm departures are often a standard part of treatment paradigms, this was an important distinction. 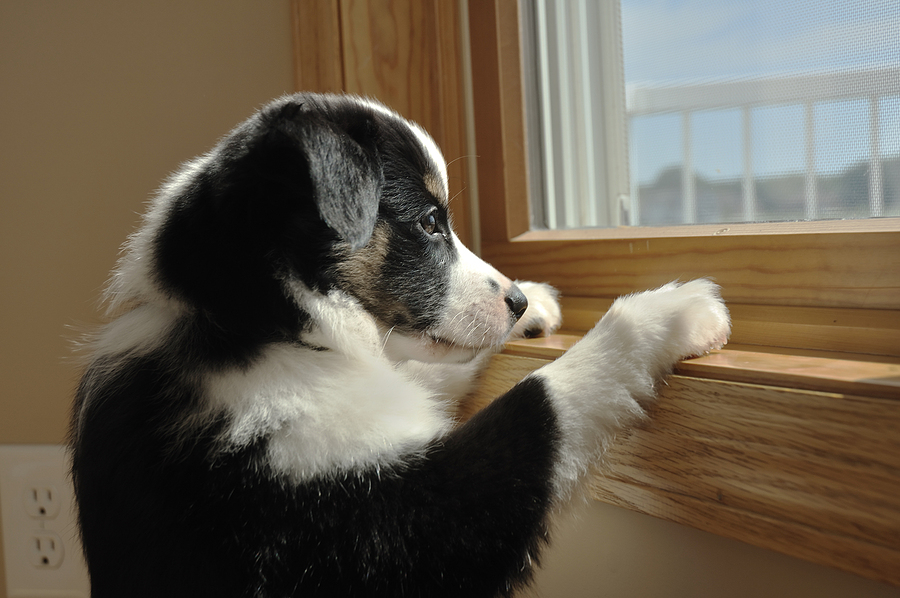 If the advice about moderating transitions is useful, one would expect that owners who were quiet and calm when coming and going would have fewer dogs with SA symptoms. That was not the case: Comparisons between the “initial” behavior of owners with SA and non-SA dogs showed no difference in behavior, suggesting that high arousal transitions did not create SA in the dogs. Higher “current leaving” arousal intensities (what the owner does now versus what they did when they first got the dog), was actually associated with lower separation-related behavior scores.

In another study, twelve dogs in a “train to adopt” program at a local shelter were divided into two groups, “high arousal” and “low arousal,” related to the behavior of humans when they left the room. All dogs were fitted with heart monitors, activity monitors and video taped. After a ten-minute period of adjustment in the room fitted with the camera, a person entered and spent ten minutes with the dog. The person (the same for each of ten trials for each dog) interacted with the dog for ten minutes, either with lots of excited talking, play and petting, or a brief greeting with a calm voice, and then a lack of interaction with the dog. In both conditions, the person then gathered up keys from a shelf, said goodbye and left the room. The dog was then monitored for vocalizations, activity levels, proximity to the door, and any other SA-related behavior.

Not surprisingly, heart rate and activity levels were much higher during the direct interactions in the “high arousal” condition than in the other. But that was not true after the person left. There was no difference in any of the factors studied between groups during the time the dogs were left alone. (Although activity levels dropped from the first session to the later sessions within the groups.)

So, what do we know from these studies? Do we know for sure that our behavior, as we’re leaving and returning, has no effect on a dog’s SA-related behavior? No, no and nopers. Each study had it’s constraints–one was correlational, and we all know that causation and correlation are often not related. And a study on a small number of shelter dogs doesn’t replicate the experience of dogs who have been living in a house for a substantial period of time.

A review of the literature shows that findings about causes of SA are all over the map. There have been correlations between SA and all kinds of factors–from having one human in the house (Flannigan & Dodman 2001), to having several females in the house, (McGreevy & Masters 2008), to being sexually intact (the dog that is), to being hyper attached (but dismissed as a factor by Parthasarathy et al. 2006). If this makes you a little dizzy, join the club, but that’s how science often works, when you are dealing with a gazillion factors and the messiness of real life outside of a laboratory. 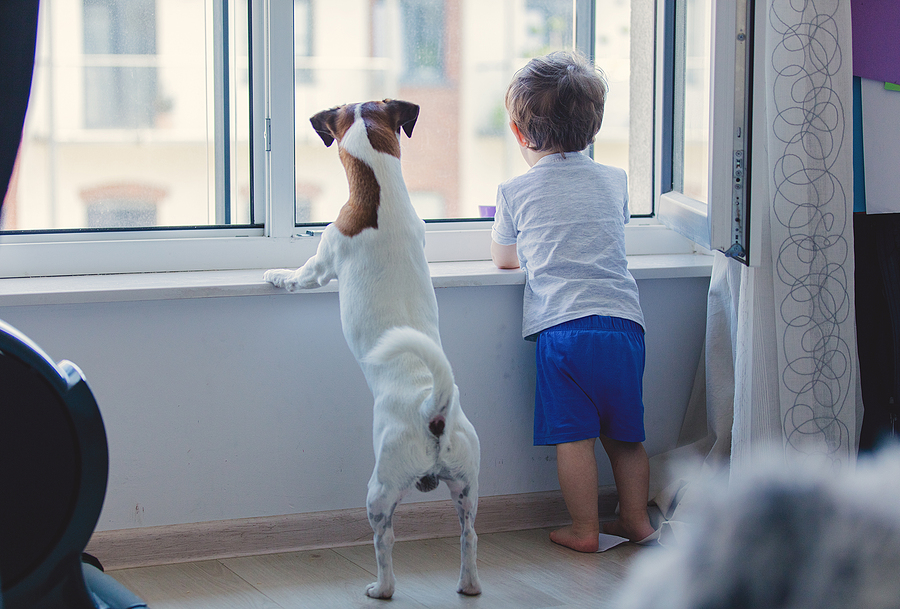 So, what do we do with this information, incomplete as it is? First, we encourage more good research, because it’s clearly needed. Getting funding for complicated behavioral research is hard–really, really hard, and we need to let our legislators know we are in favor of funding for more research on canine behavior. Second, do we continue to suggest that people keep transitions in and out of the house low key? That’s an interesting question, given how much we know we don’t know. My choice would be to explain what we know to our clients or friends, and then let them decide. Certainly there’s no harm in being calm when coming and going, but people should know there is no data at present to support being especially so. I would suggest that this study is at least fuel for arguing against, as I always have, the more draconian versions of the advice, like “ignore your dog completely for a half hour before you leave.”

What we do know is that, at present, desensitization and some forms of classical conditioning are the best way we know of to treat SA (Butler, Sargisson, & Elliffe, 2011). I’ve had a great deal of success working with clients whose dogs have suffered from SA by using those methods, although there have been a few cases of severe SA that could only be managed and never “cured.” This is not the place to go through an entire treatment plan, but it’s summarized in the booklet, I’ll Be Home Soon. But take the suggestions in it about comings and goings with a grain of salt, from an author happy to find her advice possibly out-dated. That’s how science works, and we are all the better for it. 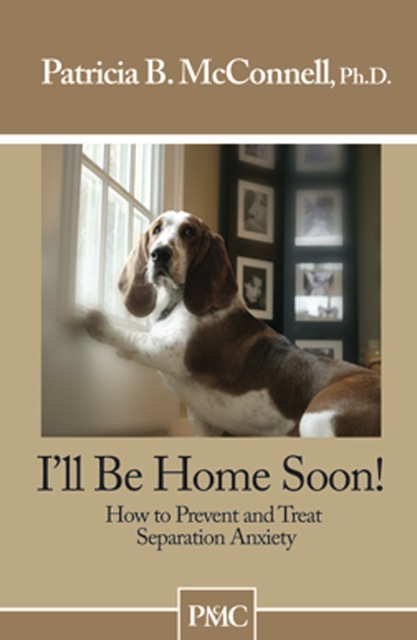 This brings up my question to you: What do you do when you leave the house? I don’t make a fuss when leaving, but if we’re both going to be gone we put the dogs into their crates with a tiny Greenie (which probably has no effect on their teeth but they adore). When we come home one of us lets the dogs out and gives them a loving greeting while stroking them, but we don’t go crazy about it, as if we’d cheated death on the way home. What about you? What do you do? If you have dog with SA have you modified how you talk to your dogs on the way out and the way in because of it? I’ll love hearing about what you do, or don’t do, from so many different perspectives.

MEANWHILE, back on the farm: It is definitely spring! It’s just busy out there, with many species of birds returning. One of my favorites are the Sandhill Cranes, a pair of whom we found feeding in a field not farm from the farm. 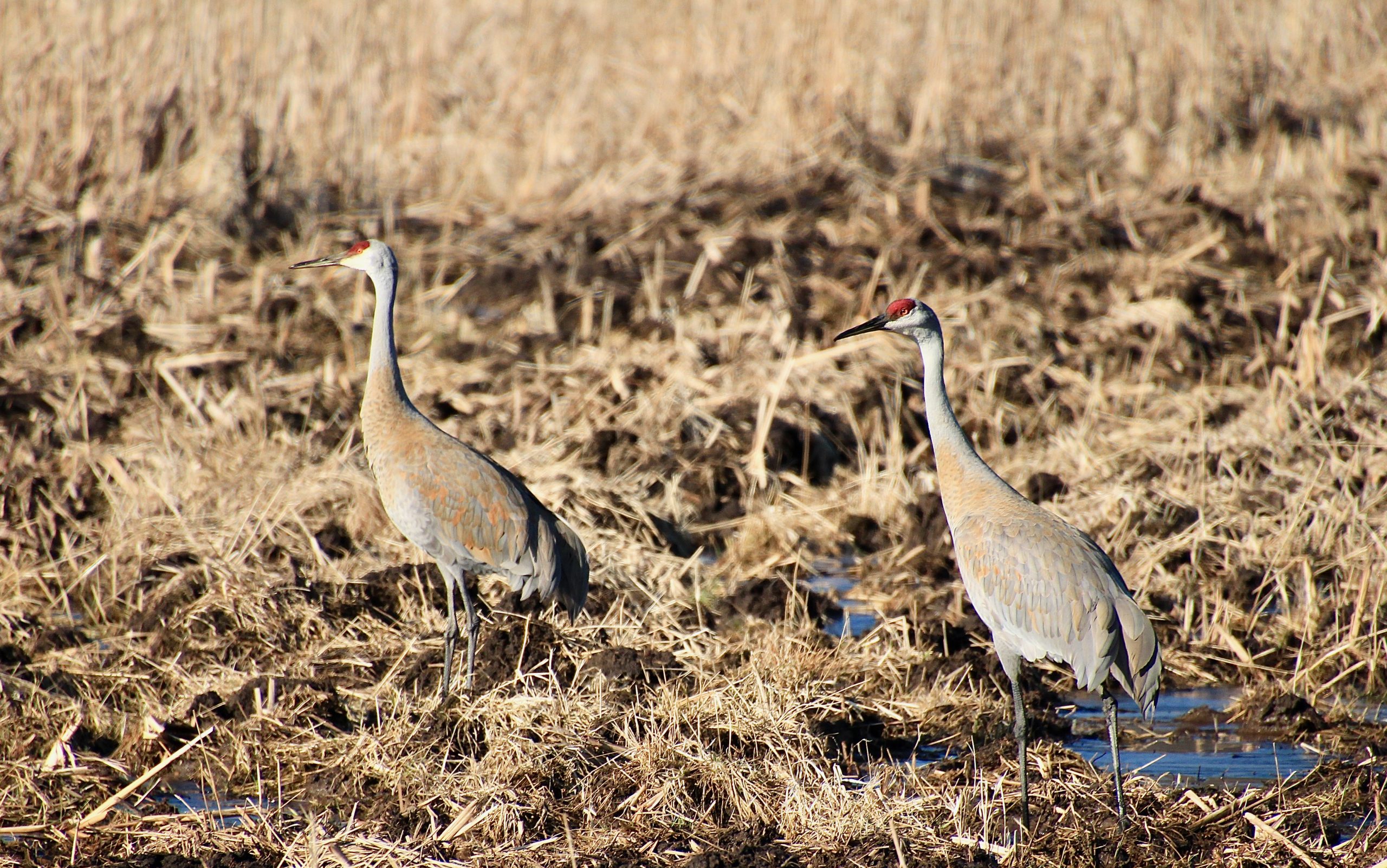 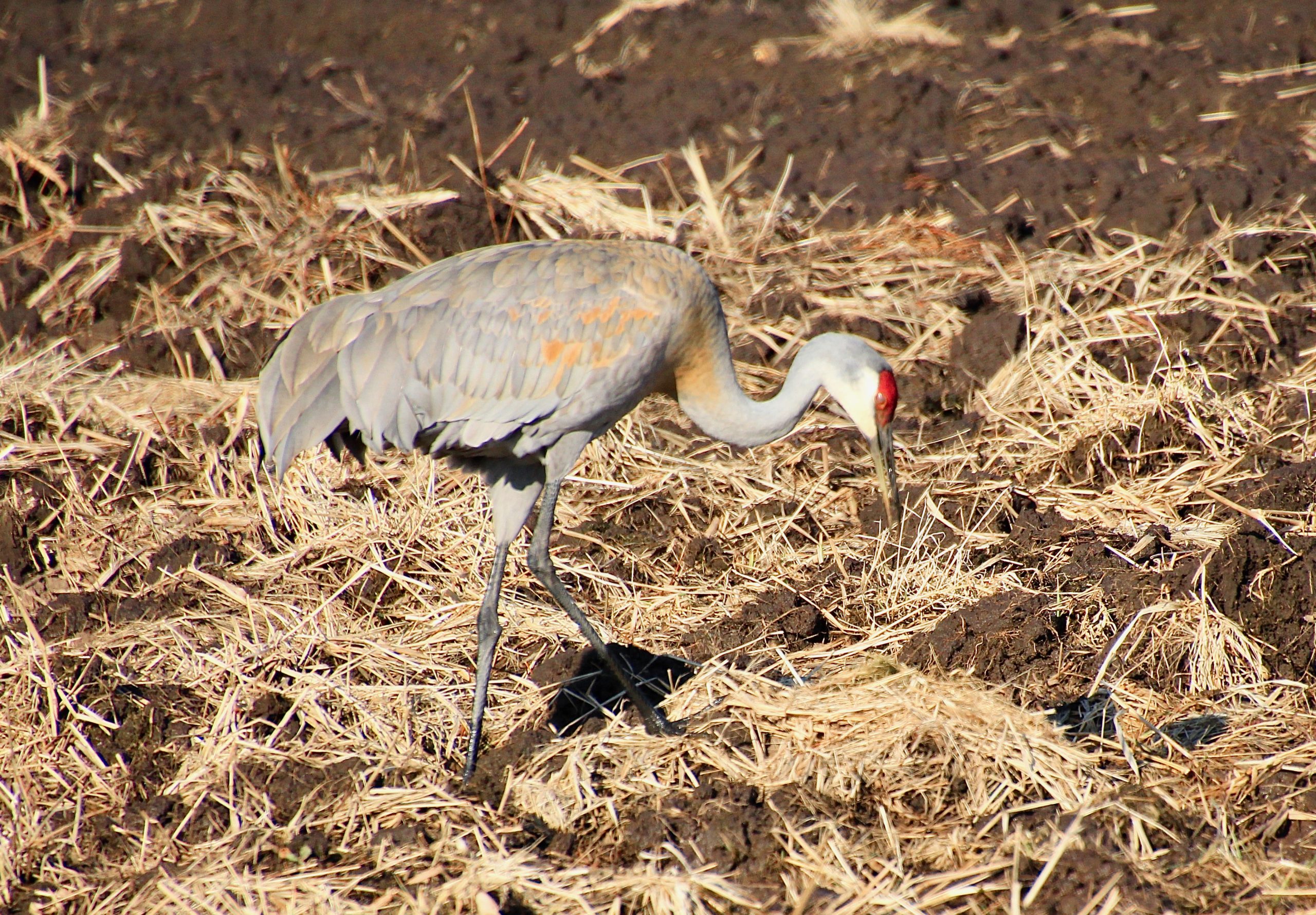 Another sign of spring are all the controlled burns in areas managed as natural prairies. Burning in spring subdues invasive plants and encourages native plants, especially grasses, to thrive. This isn’t a great photograph because the air was full of smoke. Not much I could do about that. 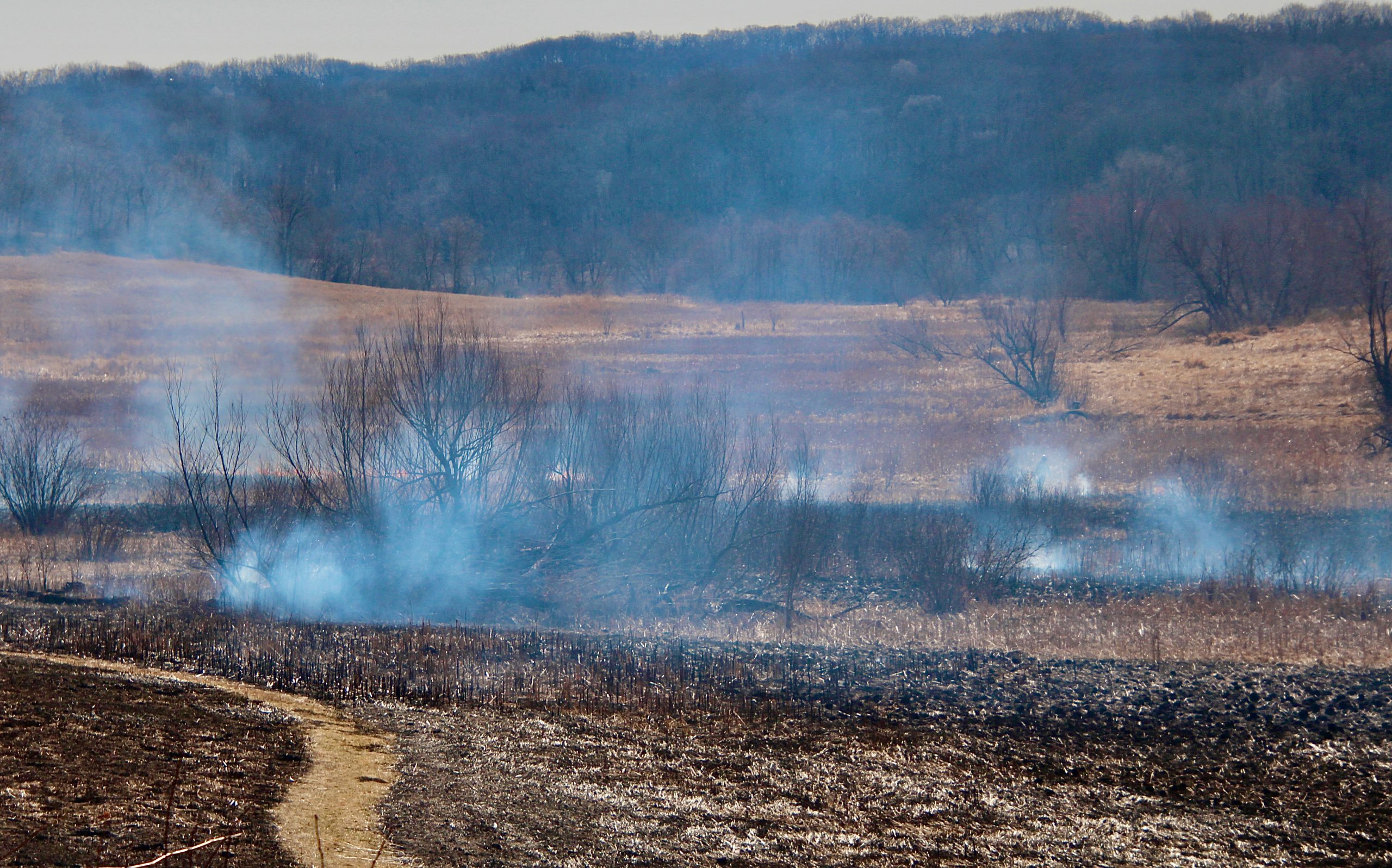 Of course, the snow on the flowers below are yet another clear sign of spring here in Wisconsin. Hey, it’s March, it happens. As long as we don’t get a brutal drop in temperature, these early bulbs are just fine. The snow melted in a few days and the flowers are thriving. 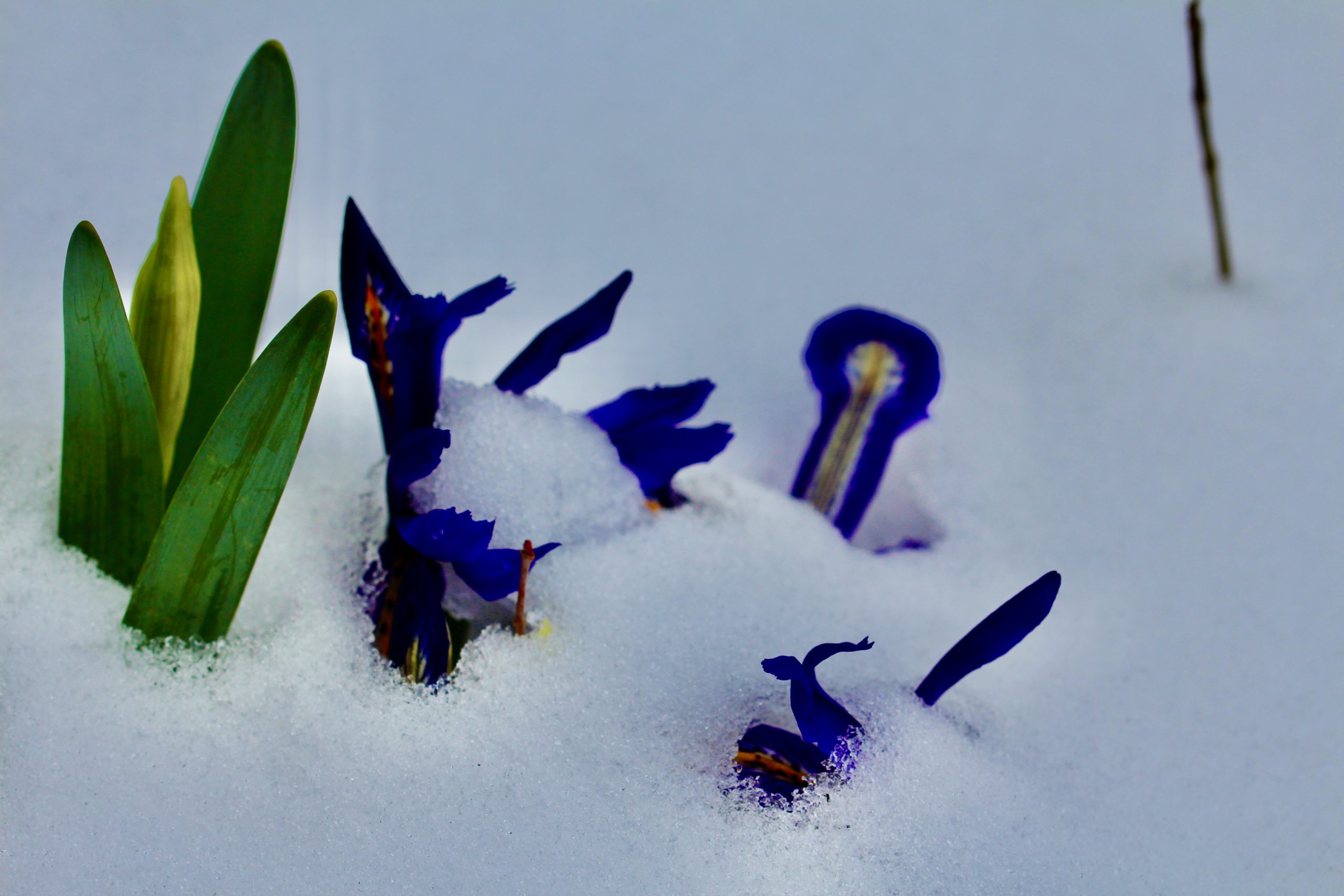 Speaking of flowers, anyone know what this bulb is? I planted some mixed bulbs behind the house, and don’t know who these cuties are. They are small, about the size of a dime, but they sure make me happy. 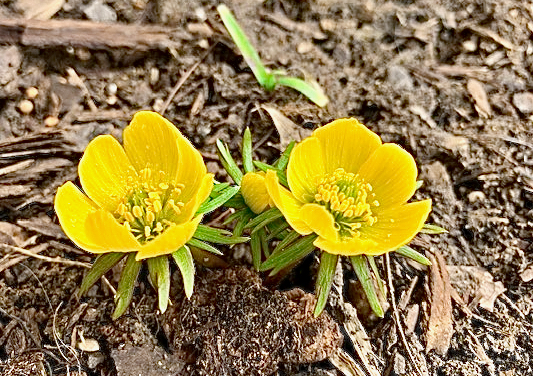 I’m not sure how happy Nellie was in the photo of her and her daughter Polly in their heated kitty house. Maybe she’s asking her why Polly’s eye turned green? Captions welcome! 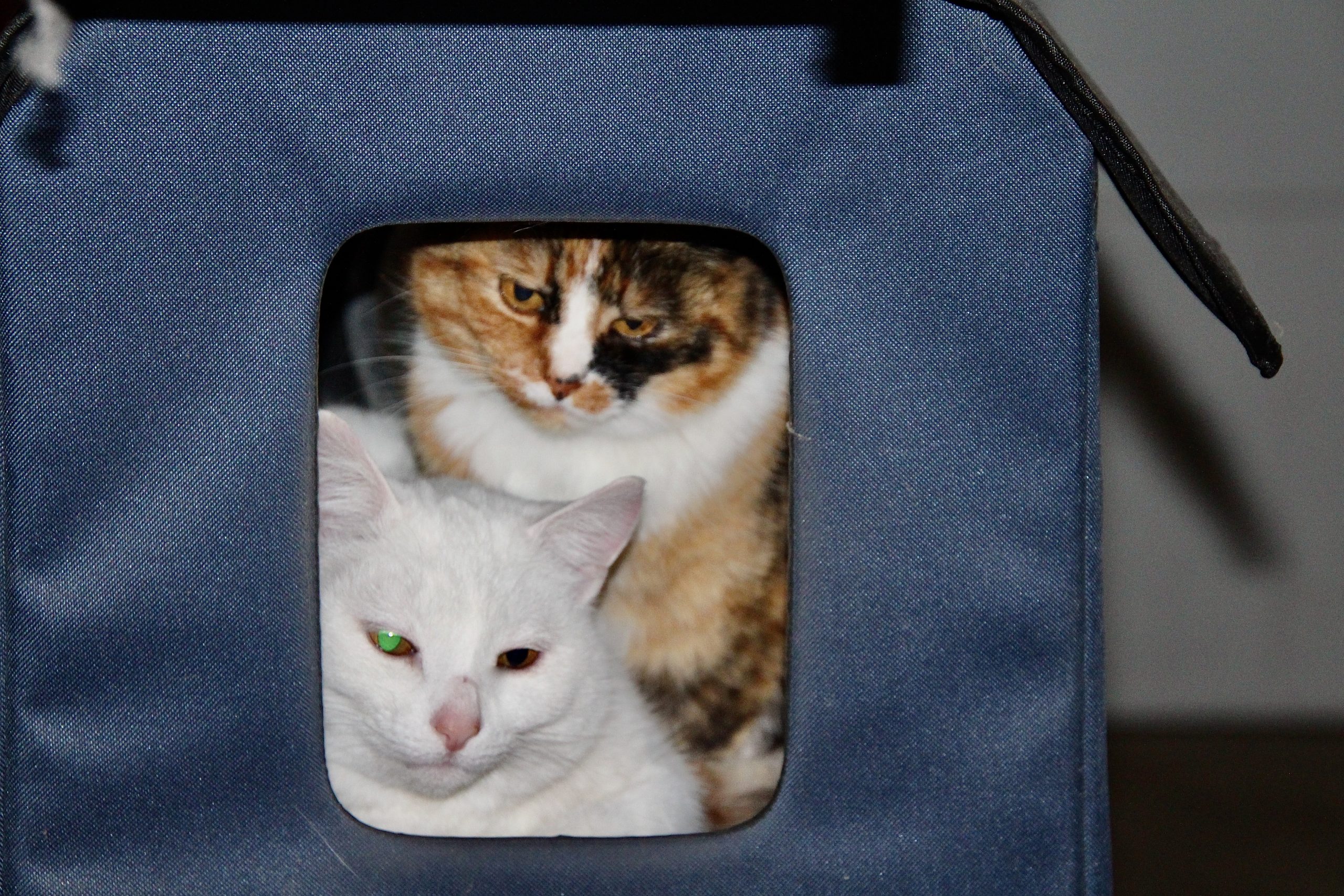 Is it spring yet at your place? Or is it fall? Let us know what’s happening where you live; we’d love to hear.
« Misty & Gypsy’s Visual Signals to Us, Part Two
Teaching the “Emergency Stop” (or “Flying Lie Down”) »