Welcome to an ongoing inquiry about the behavior of people and dogs.
Blog Home >> Dog Behavior >> “Guilty Dog” Viral Video

Have you seen it, the viral video of a “guilty” dog? A yellow lab sits hunched in a corner while his owner asks if he’s the one who got into the bag of kitty treats. The dog turns his head away, squints his eyes (not in a happy way I would argue) and after considerable prompting (or pressure), looks “guilty.” Except, the “guilty” look is actually a perfect example of what is called a “submissive grin,” used to appease another higher status individual. Most biologists call this an example of “active submission,” in which an animal is attempting to increase the distance between it and another member of its social unit. (Versus “passive submission” which promotes a decrease in distance; for example, lying down and exposing the anal/genital regions.)

I know that “submission” is not a popular term at the moment, but whether you call it appeasement or submission, surely it’s clear that the dog’s expression has nothing to do with guilt. (I first capitalized “nothing” but then changed it because it looked like I was yelling.  But okay, honestly, I was.)

Is it just me? Am I just being finicky, but I can’t even watch this video to the end. Have you seen it? I’m so curious to hear what you think. Here it is:

MEANWHILE, back on the farm: Spring!  I have to cherish it in small, tiny moments, but they are exquisite ones. I can’t find the words to express what it feels like to see color after a long winter of black, brown and white. And Spot had her lamb, a beautiful, white ewe lamb. (But just a single? Jeez, Spot, you are fat as a tick! I was sure there were at least 2 in there, and now I see you’re just fat!) 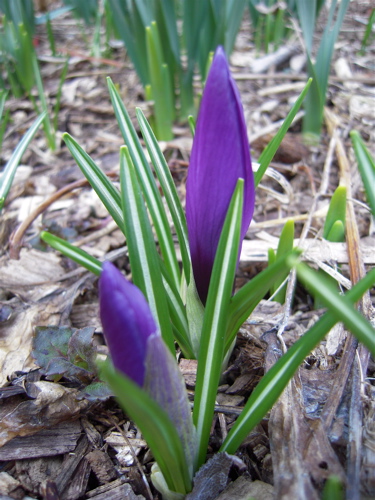