Welcome to an ongoing inquiry about the behavior of people and dogs.
Blog Home >> Animals and the People Who Love Them >> Guilty Pleasures: Animal Shows that are So Bad They’re Great

Woe is me. Jim and I missed one of our favorite television shows last week because our recording schedule got knocked out by a storm. The show is Zoo, shown on CBS in the states. The program’s premise is that a chemical company created a mutation that has caused animals to be 1) more intelligent and 2) viciously aggressive toward people. Not said is the fact that it has apparently made people much LESS intelligent. The characters on the show make one foolish, okay. . .  stupid decision after another, and the fact that they are still alive would have Darwin rolling in his grave. The show is just flat awful, but so awful that Jim and I have begun to look forward to hooting on the couch when it comes on. The ridiculousness of the show is never ending.

Example: An evil military man has come up with a way to save humanity by killing all the animals on earth. All of them. Every single one, from pandas to planeria, from cockroaches to Koalas. No plan on how to do that is mentioned, but only 5 people in the entire world appear to be concerned about it. Not because it’s impossible, but because it would be cruel to the “animals”.  Not mentioned is that, uh, people are animals too and anything that killed a hippo would kill a human. Or that killing all the “animals” would result in the extinction of the human race even if somehow the humans survived. Or that it would be logistically impossible in the first place. But wait, there’s more:

The protagonists in the show are a motley group, who meet up on occasion, while recovering from death-defying adventures with assorted mammals, spiders, and snakes, on an airplane that appeared from nowhere, and seems to never land or run out of gas. My favorite is the veterinary pathologist who is miraculously doing highly technical genetic research in a lab he created from band aids and bubble wrap. There’s nothing wrong with the acting, but the script is so ridiculous that we imagine conversations between actors and agents that along the lines of “I don’t care what the contract says, get me out of the show right now!”

I started thinking about writing a blog on animal shows so bad they’re great last weekend, when the dogs and I came into the house to find Jim howling with laughter at the television. A comedy show? No. Well, sort of. He stumbled onto a movie titled “Sharktopus vs Whalewolf.” And I thought Zoo was funny. Oh my. The animation is so bad I assumed the movie had been made decades ago, but no, it was released by the SyFy channel in 2015. Its redeeming feature is that the producers, director and actors made no bones about what they were making: Another show so bad it’s great, in its own absurd way. You gotta give them credit for not pretending to be anything but a movie so bad it’s worth laughing at.

And so, because I think we all could use a laugh, I ask you, dear readers, if you have suggestions for animal-related shows that are so bad they are great.

MEANWHILE, back on the farm. Dog days of summer indeed, still a lot of hot and humid days that keep our outdoor excursions short, although some better weather last weekend was a nice change. A big sheepdog trial is coming up at the end of August, and Maggie and I haven’t worked together as much as I’d like because of the heat. She works a bit every day, but we really need to get off my little farm (12+acres) and work on bigger fields to get ready for the next trial. The course is massive, up to international standards, and it will be a real challenge for Maggie and I, especially since this is just her third trial of her life, and only my third in two years. If she finds the sheep I’ll be happy, and I’ll be thrilled if we finish the course with any degree of aplomb, no matter what the score. 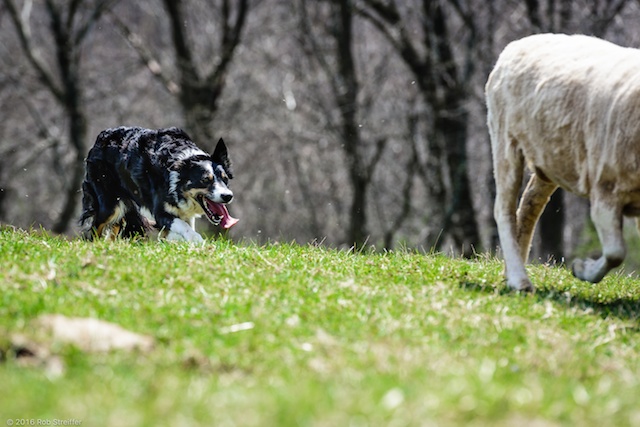 And here’s what happens if your sheepdog is faster than the reaction time of your photographer! 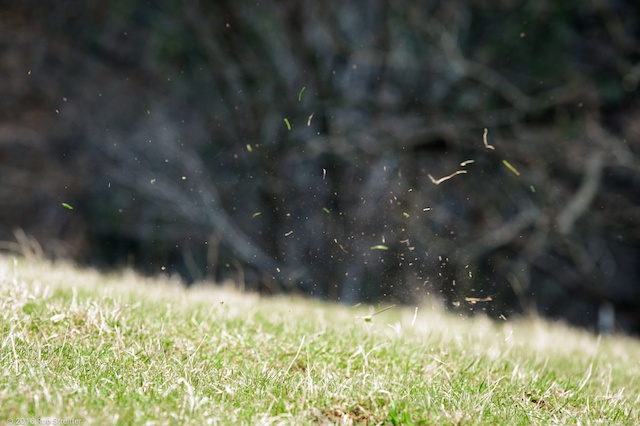