Welcome to an ongoing inquiry about the behavior of people and dogs.
Blog Home >> Animals and the People Who Love Them >> Happy Holidays!

Here’s a blast from the past! I taught Luke and Pippy to jump over a sign with a sign in their mouths. My favorite Christmas card ever. 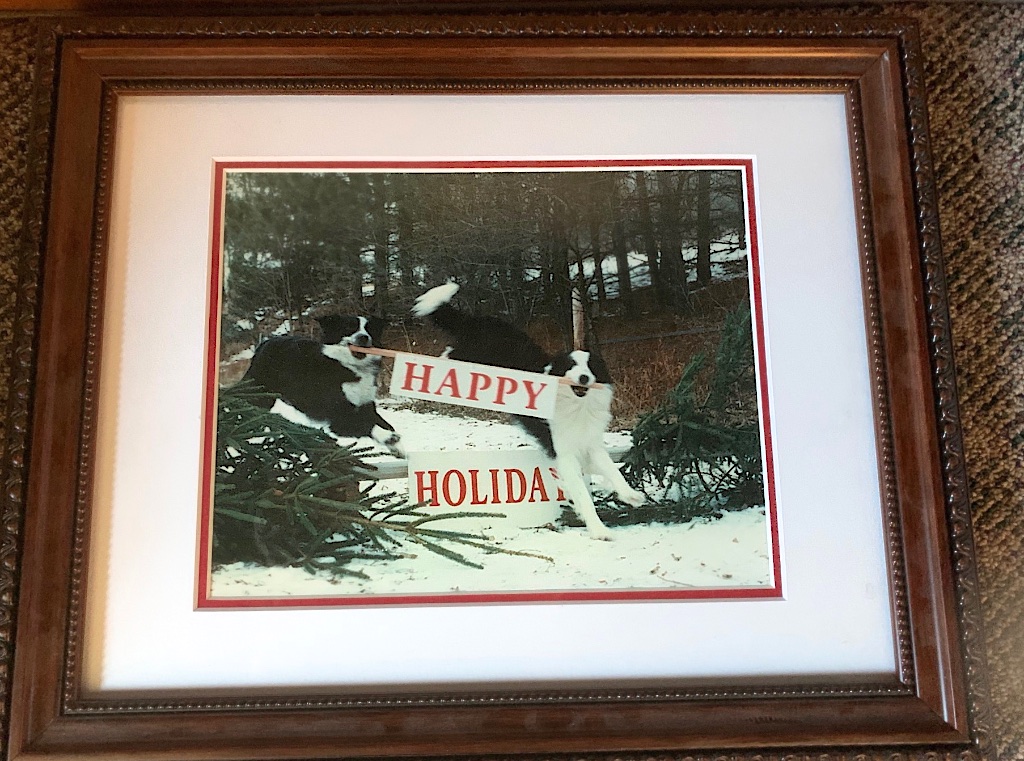 They loved to play tug together, and one day I began to say “Good Dogs!” the brief moments when they ran together with a toy in their mouth, going in the same direction. Then I switched it to a pole. Other times I taught each one on their own to jump over something with toy in their mouth, then asked them to do it together.

After making the signs, I took about 103 photographs of the dogs jumping (of course, back then, each one had to be printed out) and managed to get one good one out of the batch. I wonder if I can find some of the outtakes? I hope I didn’t throw them away. . .

I’m starting to do the same with Willie and Maggie, praising them the rare times they stop tugging and run together. Maybe next year they’ll be at the top of the holiday post? What about you? What’s your favorite Christmas card?

MEANWHILE, back on the farm: The sunny days continue. It’s just heavenly, and warm too. We were at a sheepdog trial on Saturday and it got so warm that I had to take off my coat.  The ProNovice field at the “Wentz Snow Bowl Sheepdog Trials” is not far away from one of the lifts at Cascade Mountain. (As someone from the west, it’s impossible to say “mountain” without doing a spit take. But it’s a nice hill.) We undoubtedly entertained some skiers, and the movement of the lift makes it hard to push the sheep through the gates on the first leg of the drive. Love the challenge! 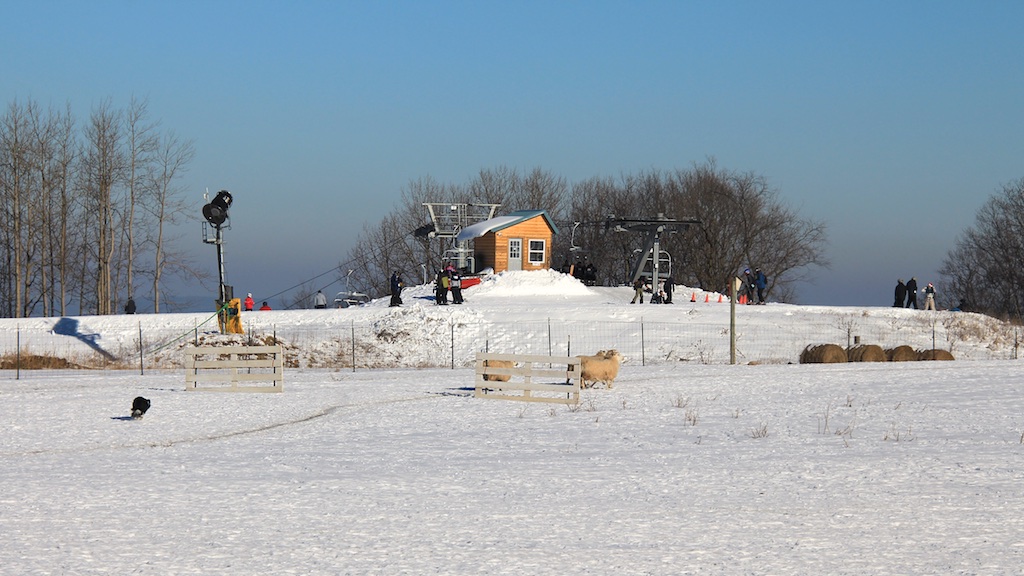 Our second run wasn’t so good. This batch of sheep was “heavy”, as in “We will move like molasses on a cold day, thank you”. Maggie hates working sheep that need pushing, and when she gets them, she does what I call her Rope-a-Dope and becomes less responsive. And I still couldn’t pen (grrr), all on me. Back to the drawing boards.

The best part of the trial was Willie driving about 80 sheep 1/4 mile or so through the woods for the Open runs. Once we got there he had to gather them back up in a huge field, and then push them into tiny pens. It took two dogs and dog people to get the sheep penned, and then Willie worked his 12.5 year old tail off getting five sheep away from the pen for each run. Hard work, and I was so proud of him I could barely keep my heart in my chest. I wish I had photographs, but I didn’t think to bring my new iPhone. We stopped after awhile because both he and I were getting over tired. Glad we did, cuz both of us were a tad groan-y that night.

Here are some photos I did take of some cows at the farm. You just gotta love cows. Best eyes ever. 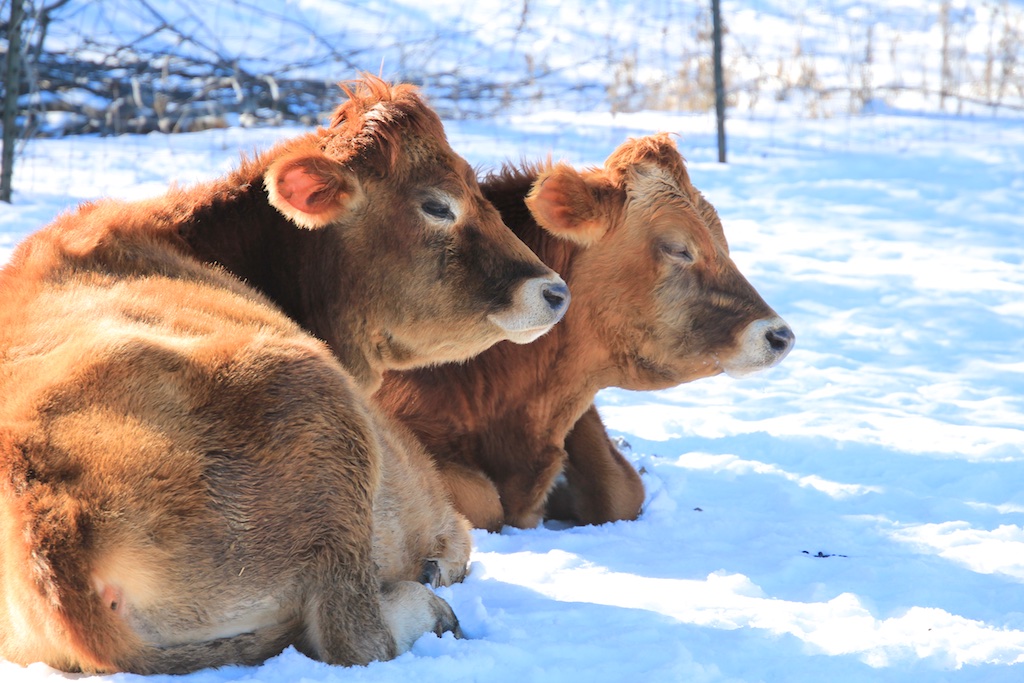 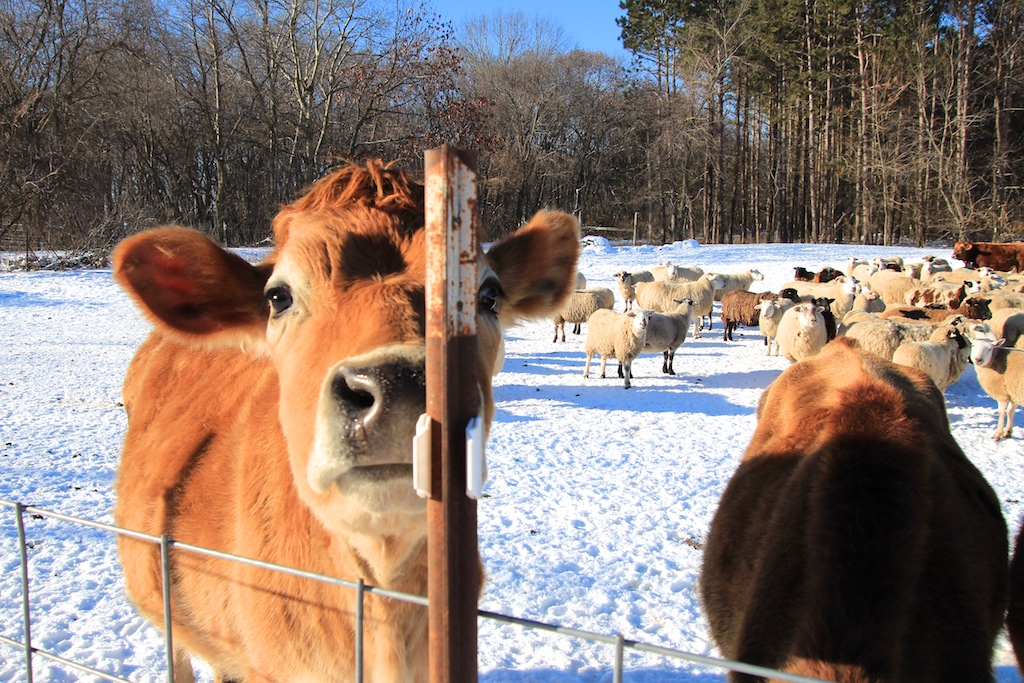 I’ll be taking next week off, so no post on Christmas Eve. I wish you all the best that the holidays can be.

May the end of your year be full of love and light.