Welcome to an ongoing inquiry about the behavior of people and dogs.
Blog Home >> Border Collies >> Have an Example of a Creative Reinforcement?

I’m working on a column for Bark magazine about positive reinforcement. It’s such a simple concept once you get it, but it’s a bit like riding a bicycle . . . it takes awhile to be able to do it comfortably and effectively. In the column, I want to stress that it is the receiver who defines what is “positive reinforcement,” not the giver. I find that to be one of the biggest mistakes that we humans make: doing things we think our dogs like, that they actually define as aversive (and therefore act as positive punishment, exactly the reverse of reinforcement!).

The most common example of this mis-communication is when people praise and pet their dogs either in ways the dog does not enjoy (especially patting on top of the head) or at a time that the dog doesn’t want to be petted  (while playing with other dogs for example).

One of my goals for the column is to broaden people’s definitions of “positive reinforcement,” and I’m going to provide some examples of things we humans might not think of off the top of our head. Here are my two favorite examples. One is from Karen London, Ph.D.. CAAB, (who writes a great blog for Bark by the way). She was out in the country with her newly acquired lab cross when they flushed a deer. She called Bugsy to come just before he sprang off in pursuit, and to her joy and amazement he turned and ran back to her. Alas, she had mistakenly left her treats in a different jacket and had no treats with which to reward him. She couldn’t even take off running to let him chase her because she was in cross country skis in cross country ski tracks, facing the wrong way. But, ever the quick thinker, Karen reached into her pocket and took out a used tissue and gave it to Bugsy when he arrived. Voila! Her dog was thrilled at this acquisition, and Karen’s creative thinking laid a foundation for a solid recall for years to come.

My second favorite story, (continuing along the lines of “yucky things that dogs love”), was at my farm when I had an Advanced Outdoor Training Class. One of the students had a hunting dog who had no interest in anything but sniffing out wild birds and eating sheep poop. Now, if you’re not familiar with sheep, sheep poop comes in piles of small, dry pellets that producers call “berries.” And it’s just grass, after all, albeit a bit recycled. But that explains why I suggested my student just pick up a handful of sheep berries, put them in her pocket and use them as reinforcements. There were no parasites in them that could harm a dog, and although one wouldn’t want to give too much to a dog at one time, they were the perfect reinforcement for this dog at that particular time. Jokes  have been made that if times get tough I could package the stuff and sell it . . . but as effective as it was (it IS what the dog wanted, after all!), I don’t think I’ll find a market for it.

Here’s my question for you: Do you have an example of a creative reinforcement? Something your dog loved that is beyond the usual dog treat-exuberant praise-click & treat menu that we all know and love? I’ll bet many of you do, and I sure would love to hear it. If you send it in, I might use it in the column, so no secrets!

Meanwhile, back on the farm: Rain rain rain. Sure is green here, looks like Ireland. Life in general has been a tad challenging, what with a young puppy and Jim’s arm in a brace and my injured knee (but good news — no surgery.. yeah!  It’s supposed to be as good as new in two months, phew.). Hope and Will played much of the day  yesterday, so good to see. Will gets tired though, and so today he seemed like he needed a rest. I am quick to let him go upstairs when he looks like he needs a break. I sympathize!

Hope shows no signs of wanting to stalk Sushi, but boy does he want to play with her! What an irresistible play bow. 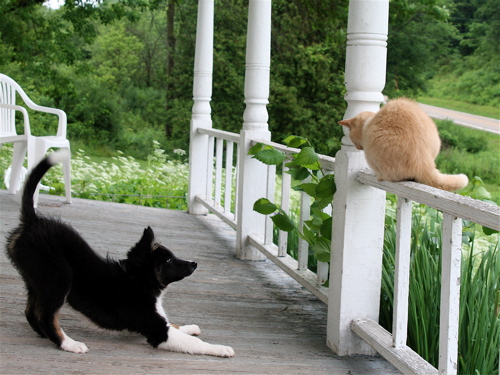 Unless, of course, you are a cat: 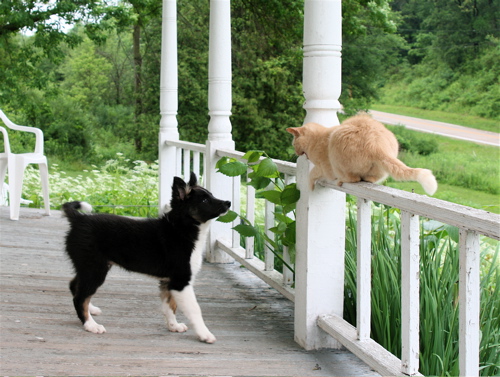 But here’s a highlight: we’ve been working on coming away from the cat when called, and bless his furry little heart, Hope came off right away when I said “That’ll do.” Good boy. Of course, we’re working on not bothering the cat in the first place, but hey, it’s only been 3 weeks. In the photo below I’ve just called him, he is just turning away and is starting to come toward me. Jackpot . . . that was worth 10 treats in a row from the treat bag. (and do you love the look on Sushi’s face?) 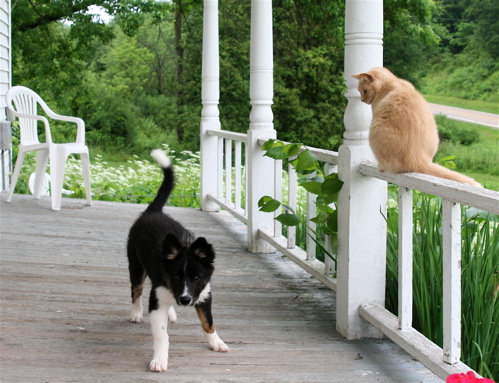