Welcome to an ongoing inquiry about the behavior of people and dogs.
Blog Home >> Animals and the People Who Love Them >> Helping Owners with the Inevitable

Our discussion about how people handle being frustrated by their dogs brought out so many interesting points, and it got me to thinking:

First off, the more we know about dogs, the less frustrated we get. Frustration comes from an inability to affect the world around us, and once we understand who dogs are and how they learn, our ability to influence them increases significantly. As I think about it, the comparison of my frustration levels now and 25 years ago is like night and day.

Right now, there are really only two things that Will or Lassie do that have pushed my buttons in the last six months–Will’s relentless stalking of Sushi, and Lassie’s tendency to get under foot when I’m moving around the kitchen. My frustration with Will was a classic case of an inability to influence the world around me, because so much of what I had been trying wasn’t working, and the behavior was constant and potentially dangerous. When I finally sat down and wrote myself out a treatment plan (plan # 3, fyi), my frustration went away. (Things aren’t perfect by the way, but they are 95 % better, and if I start to feel a twinge of irritation I put him in his crate. Breath huge sigh of relief.) Lassie has an “old lady pass” and no matter what she does I pretty much just take a deep breath and let it go. Granted, poop all over the house at dark-thirty in the morning after 4 hours of sleep is still going to elicit something loud and nasty from my mouth on a bad day, but it wasn’t directed toward any of the dogs. (It was Lassie by the way, she had diarrhea that day too, but she’s fine now. Happy Dance.)

But twenty five, thirty years ago, I remember desperately trying to get my Saint Bernard to do something (or not to do something) with no success, and no good ideas about how to accomplish what I wanted. I know that’s a common situation for many dog lovers. They love their dog, but they can’t get successfully influence their dog to do what they’d like. They get frustrated, then angry, and many of them feel guilty about it. But dog training books and dog training classes don’t often address the reality of dog ownership. No matter how hard you try, and how much you learn, things are not going to go according to plan. If you’re an average person (and even if you’re right out of the radio show Prairie Home Companion and are above average), there are times you’re going to get steamed. Surely we need to give people some coping devices. Here are some ideas, I’d love to hear yours:

1. Do all we can to help people have realistic expectations. The only reason I am lucky enough to have Lassie is because the man who adopted her from a shelter (long story) took her home and brought her back the next day. Seems he’d shut her into his bedroom for her first day home alone at his house, and he came home to find she’d pee’d on the rug and chewed through the belt he left lying on the ground. “Chewed it in HALF!” he kept repeating to me, as if somehow that was a sign of an especially incorrigible dog. I got her the next day, and named her Lassie because she turned in mid-air and came running to me when I called her name, even out of a dead run, while chasing after all my other dogs. That was NOT expected, but a year-old dog chewing on leather while being left home alone all day, her first day in a new house after being in a shelter, is hardly a significant behavioral problem. I’m so lucky her owner-of-one-day didn’t know that, but surely we need to help people know more about what to expect (ie, you WILL lose a pair of good shoes if you get a puppy).

2. Do all we can, obviously I suppose, to help people learn how to influence the behavior of their dog in ways that are effective as well as humane. Just about everything else I’ve ever written is in some way about this, so I’ll leave it at that!

3. Directly address the fact that dogs can be frustrating, and give people coping skills to deal with it. We should add this into Puppy and Beginning Dog Training classes, don’t you think? We can suggest:

>>> Saying one thing and meaning another (I love that so many of you do that too. If you haven’t yet read the comment about the oven, I highly recommend it!) Yes, indeed, not a good strategy around children or those who wouldn’t understand that you truly don’t mean what you are saying, but it can be ever so useful in some circumstances, especially with an adolescent (dog!).

>>> Asking yourself why what happened happened (while you’re deep breathing).

>>> Bursting out laughing. Someone once suggested to me that I try that with someone I was working with who was being so unreasonable as to be border-line abusive. They had a lot of power over me (professionally) and used it in ways that were, uh, crazy-making. I burst out laughing the next time I wanted to poke pencils in my eyes over something she said, and it had an amazing effect (on both of us). I wasn’t laughing at her, just laughing with pure delight at the absurdity of what she said. It wouldn’t have the same effect on a dog, but it sure does lighten things up.

>>> Quietly, and with no fuss, putting your dog in the crate or another room. Away. From you. I honestly think this is one of the skills that professionals have that they don’t hesitate to use… much more so than the general public. It’s okay to recognize that something is steaming you up, and that you can’t or shouldn’t act on that feeling at the moment.

Of course, there are lots of things to do later when you’re feeling differently, thinking through how to prevent the problem in the first place, but I’m talking about that moment when you first discover that the world is totally and truly not your oyster. I describe situations like that as “This is NOT the video tape I rented!”

Meanwhile, back on the farm: It’s spring. Honest. The Black-capped Chickadees started singing their spring, territorial song yesterday (“Wooooo Heeee”), and I’ve decided that spring comes when the Chickadees start singing. Besides, it’s over 32 degrees today, and it feels absolutely balmy. I actually don’t want it to get too warm, I want the snow still on the ground so that I can snow shoe and Willie can play fetch (the snow seems to insulate the impact of his landing or short stopping, so he and I have been in heaven lately). There’s still quite a bit left, as you can see from this photo I took on the way to my office: 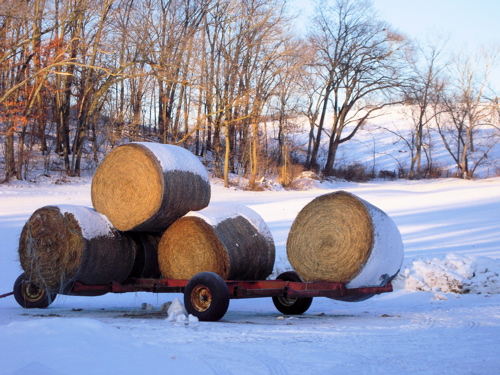 « Isn’t It Great That Dogs Don’t Get Sarcasm?
The Right Dog »