Welcome to an ongoing inquiry about the behavior of people and dogs.
Blog Home >> Animals >> Hoping for Hope

This is a tough one to write. As regular readers know, I primarily got Hope as a playmate for Willie, my turned-around crazy dog who took three years of intense work to deal with his pathological fear-based aggression to other dogs, his episodes of all-out rage, his extreme sound sensitivity, his dysfunctional gut, etc etc etc. And inside all that was one of the sweetest dogs I’d ever met, and that is the dog you’d meet if you came to the farm today–a sweet, people-loving healthy dog who loves his dog buddies and goes all happy-faced and loose bodied when he sees an unfamiliar dog approaching him. I’d never take him to a dog park, and he becomes a nervous wreck if a large dog he’s never met comes into the house, but with a little easy management he is a wonderful dog, and I love him now like life itself.

My dear Lassie-girl, the one who died in January, was Willie’s best friend, and they played together up to a few days before she died. Soon after she did, I started looking for another dog, primarily a play mate for Willie. I surfed on rescue sites for months, any breed would do, never quite finding what looked like the right dog, and then heard about a litter of BC’s from a great breeding with a super track record. That’s where Hope came from, and he indeed is a super dog. He is the smartest Border Collie I’ve ever had, and I don’t need to explain to any of you what that means. He is so fun to train it’s addictive. I could happily quit all my jobs, including this blog, and spend the next few years training Hope. He’d be doing rocket science by the time he turned five. I’ve rarely had this much fun training a dog, and especially now that we’re over the worst of the early puppy stages (including having to pee every eight minutes), he is a joy.

He’s also competitive, and that has become the basis of his relationship with Willie. As Hope matures, Willie has stopped greeting him when we come downstairs in the morning. They have stopped playing tug games, I suspect because they were never games to Hope. He’d work his way up the toy until he was an inch from Willie’s mouth and do all he could to get the toy and run away with it. Unlike other dogs, he seemed serious about it from the first time he played. Not so some other dogs: I have a video of Lassie playing tug with Willie when he was a puppy, and she continually gave it back to him if she pulled it out of his mouth. But at nine weeks of age Hope  wanted the toy, period. Willie and Hope don’t play much wrestle play anymore either. They do on occasion, but it’s much less frequent and doesn’t last very long. Some of this could be related to Hope’s age, he is getting older after all, but he’s only 5 months old, not exactly in his dotage.

Hope is not the only problem. Willie, who wasn’t able to play with dogs outside of the house until he was almost one and a half, turns out to be no fun to play with outside if you are a young puppy. As the strongest eyed BC I’ve ever had, Willie loves to herd other dogs, running around to the front of their forward motion and stopping them by diving in and either nipping or just plowing into them. I hadn’t seen too that much of this until I got the pup, because usually  Willie has played with older dogs who are as fast as he is. Wilie plays “let’s race!” and the dogs run shoulder to shoulder, sometimes I swear slowing down and then speeding up on purpose to keep the game going. However, he has tried herding other dogs before. Once he tried herding one of his BFF’s, Mishka the Dobbie bitch, who, with the power and confidence of a canine Serena Williams, told him in no uncertain terms never to do that again. He got all flat-eared and grinny-faced after she disciplined him and he got the message. He’s never done it to one of his other friends, a year-old BC, who is as fast as he is and who loves to play “Let’s be race horses!” along with Willie. But Hope is just a puppy, and can’t possibly keep up with Willie, so sometimes they play well outside, Hope running after Willie or Willie running circles around Hope, and sometimes, more and more often it seems, I have to call off Willie because it starts to look more like harassment than play.

Willie also seems to have a V on his forehead for Victim. When Hope was younger, Willie never corrected him for the usual things that rude, young puppies get disciplined for by older dogs. Instead, Willie would  hang his head and look oppressed, or look as though nothing had happened while I was thinking “Willie! Stand up for yourself!”

And so, here I am, in the process of deciding whether Hope is the right dog for Willie. He is a great dog, but I am not looking for “a dog.” I’m looking for a friend for Willie, and although you can treat and manage a multitude of behavioral problems, you can’t force a friendship if it’s not there inherently. {Added later today: I don’t need them to be best friends, but Hope’s competitiveness and adult male behavior as a young pup might be a red flag that could be some serious problems between him and Willie down the road.}  My loyalties have to first be to Willie, and I have to do what I think is best for him. Nothing would make me happier if I decide that Hope is the right match. Hope is smart and fun and probably will be brilliant on sheep and damn it, has gotten drop-dead gorgeous as he’s grown up. He is not perfect: he is a resource guarder (he is already 50% better, yes I think there’s a genetic basis but I totally disagree with some who say it can’t be treated), he’s a tad pushy (barks for attention, jumps up and slams against you) but no pup is perfect and all of his ‘issues’ are things I not only know how to treat or manage, I enjoy doing it. The problem is that this isn’t a training issue; I wish it was because then I could better deal with it. The fact is, no one can make two dogs into friends if they don’t want to be, any more than you can force two people to love living together. {Again, they don’t need to be best friends, but I’ve seen dogs living in constant states of vigilance and anxiety and that’s not a life that is good for anyone.}

Cross your paws for us. I haven’t decided what is best yet, but thought I should let you know where things stand. This issue does bring up an interesting question related to all of us: that of friendship between dogs. I’d love to hear from you about the dogs in your life who have either become best friends, or not… and why. I think the issue of relationships between dogs is often not addressed at the right level: we talk about resource guarding or appropriate play, but what about true friendship? Camille Ward’s research on play found that as dogs mature they seek out the same play partners more and more, and she suggested we need to think more about whether our dogs need BFFs of their own species. Your thoughts?

MEANWHILE, back on the farm: Sad news from last night. We lost another lamb to a new worm in the area that is resistant to worming medicine. It was our best lamb, a ram lamb I kept as a potential breeder. He looked fine two days ago, and then I found him dead last night. I talked to my vet and he said that 3 other farms in the area have been losing lambs right and left; one farm lost 20 lambs before they could blink. I’ll be trying a new medicine tomorrow after the sheep are kept off food for 12 hours (we’ve learned that worming meds work best on an empty stomach), so tomorrow before I fly out Jim and I will be cowboying sheep in the barn at dark-thirty in the morning. (And thanks friend Kathy for helping with the dead lamb. Never a fun way to spend an evening.)

Happier  news: here’s Hope playing with a new friend, a four month old BC mix pup who came over and played non-stop for almost an hour and a half. Hope played beautifully with him… he always does with other dogs it seems. The younger pup was always on top by the way, and look at that tail! 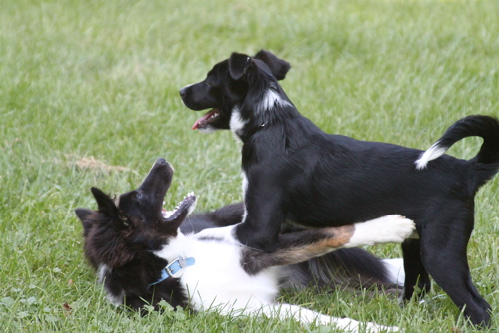