Welcome to an ongoing inquiry about the behavior of people and dogs.
Blog Home >> Animals >> Horse and Dog Training–Similarities

I just finished reading a lovely novel, The Hearts of Horses, by Molly Gloss. It’s about a young woman who strikes out to make her living “gentling” horses in 1917, when many of the men were off to war. She’s more comfortable around animals than she is around people (a current topic of postings on my Feb. 4th ’09 blog) and uses methods atypical of the time. Rather than “breaking” horses, Molly uses what people often now call “horse whisperer” techniques to teach horses to work with, rather than against, the people who ride them.

In spite of my lack of fondness for the title “horse whisperer,” I will never forget watching horse trainer Pat Parelli work an “uncatchable” horse in an arena in Madison, Wisconsin. The horse was so difficult to catch that the club who brought Parelli to Madison began to despair that they wouldn’t be able to get him out of the field and into a trailer to bring him to the seminar. When the horse was let out of the trailer into the arena, he pounded around the dirt oval, eyes white and nostrils flaring, always speeding up whenever Parelli got anywhere near him. And in 15 or 20 minutes he was following Parelli around like a puppy, his big equine head heavy on Pat’s shoulder, his eyes liquid and his face relaxed.

The reason I bring it up here is that one of Parelli’s (and of many others by the way) techniques was so similar to what I do with dogs that I was jumping up and down in my seat. Besides rewarding the horse for even just stopping and looking at him (by stopping himself), Parelli began later in the seminar to talk about what I call “space management.” Although his techniques have changed a bit since I saw him years ago, he illustrated the importance of gently and kindly “owning the space” (my words, not his) around your horse.  He encouraged people to be mindful of not letting horses run over them and, once they had an established relationship with the horse, to move backward to get the horse to approach, and to move forward to ask the horse to back up. What I like best in general about this kind of work is that is focuses on understanding how an animal sees the world, and trying to translate what we want into signals that they can understand.

That’s how I see what I call “body blocks,” in which I teach a dog to ‘stay’ by at first reinforcing the shortest pause in their behavior with food, but also by using my body like a crossing guard to stop them if they start to get up before released.  I describe it in much more detail in Family Friendly Dog Training, but the idea is simple: ask for the briefest of stays at first and reinforce them as they are staying by underhanding food all the way to their mouths. Gradually, oh so gradually ask for longer and longer pauses (start with 1/2 a second, then one second, then two….honest: start with ‘stays’ that short). If at any time the dog starts to get up, just lean forward to “take the space” and lean backward instantly when the dog responds. It’ll take some practice (practice on a person first, no kidding!) but once they get it people are amazed at how easy it can be to teach stay with a combination of reinforcement and a simple, ethologically relevant consequence.

I’ve talked about body blocks for many years now in many seminars, and one of the most gratifying moments in my career was when I started hearing people talk about ‘body blocks’ without mentioning my name. That meant they’ve become part of the lexicon, and boy does that feel good. The best times have been when seminar participants have come up, before I started the relevant demonstration, and told me that I should try using something they learned called “body blocks!” How sweet it is…

But I digress: all this is only because I was so struck this weekend reading The Hearts of Horses, about the difference between “breaking horses” (what a horrific phrase when you think about it) and “training” horses. I was reminded of growing up in the 50’s and 60’s in Arizona, riding as a young girl with crusty old cowboys who talked about ‘”gentling” horses, about trying to see the world from their perspective, and being their friend instead of their oppressors.  Of course, they were the exception; more common was the attitude that you must “show them who is boss” and get them trained up in a matter of a few days no matter what it took.

The novel I just read isn’t going to teach you how to train a horse using these methods, but it is a lovely examination of a young woman’s coming of age at a very different time in our country’s history, and of the topic of the last post–being more comfortable around animals than people.

Meanwhile, it was over 40 degrees this weekend!  Amazing, totally amazing. Willie and I worked the flock without lambs (he’s learning his right hand flank whistle) although the snow in the hill pasture was still over a foot deep; Jim and I wormed the sheep and I cooked like a maniac. I took braised spinach and carmelized tomatoes out of the freezer and scrambled them with eggs and English cheddar for breakfast. I cooked up broccoli, spinach and parsley for the dog’s greens, mixed them with pumpkin and steel cut oats and egg for Lassie and sardines for Willie. I put 8 servings of what Jenna calls Comfort Soup in the freezer: chicken and carrots and leeks and mushrooms, cooked w/ lots of red wine, balanced with dumplings sparked with rosemary and scallions. Yummm.  Later on Sunday I marinated some lamb chops in the rest of the wine and ate them with fresh greens and wheat berries. So good. It seems that I am obsessed with food lately (the scales confirm this). Is it the weather? Do I have any excuse whatsoever? Doubtful.

Here’s a photo of my cat Sushi, who deserves a bit of attention herself for heaven’s sake, on one of her favorite perches: the top of the truck. (And yes, I worry a lot about her being hurt or driven away unintentionally by a visitor–she’ll walk into your car in a heart beat if I don’t watch her, so I attend obsessively to her whereabouts whenever anyone is driving up or driving away.) You’ll note that Sushi has concerns about looking straight into the eye of a lens! 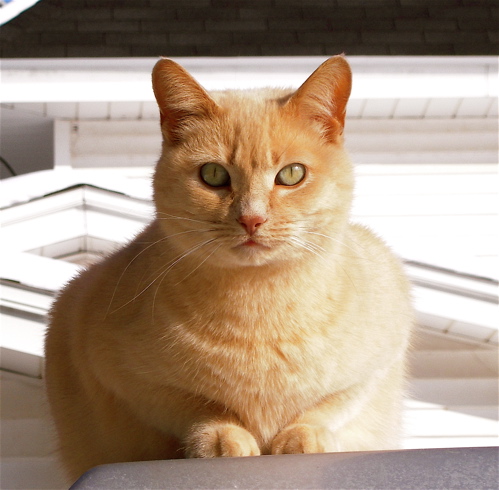 « Why are some People more comfortable around animals?
Farm Update »