Welcome to an ongoing inquiry about the behavior of people and dogs.
Blog Home >> Animals >> How Do You Play with Your Dog?

Surely our mutual love of play is one of the reasons that dogs and people get along so well. As Karen London and I write in Play Together, Stay Together, “Play is powerful stuff. It influences so many things, including development, motivation, emotions, physiology, communication and behavior. Wow! That’s an impressive list.”

After years working as Applied Behaviorists, it was clear to Karen and I that play has the power to strengthen one’s relationship with a dog, or alternatively, to destroy it. You can use play to teach self control and good manners, or to inadvertently teach a lack of frustration tolerance and a lot of rude behavior that ends up getting a dog into trouble. You can use play to allow a dog to release tension, to learn a behavior incompatible with a problematic one, or to become wound up and hyper-reactive. The list goes on and on. Play is so important that one of my favorite seminars is one I did on play (Dog Play DVD), talking about both between dogs and between people and dogs.

So here’s the question, How do YOU play with your dog?

Willie and I have several different ways to play that have become incorporated into our daily routine. After the chores are done (dogs, cats, sheep and birds fed), Willie and I play with one of his favorite toys, usually an old plastic disc. Because of his shoulder we can’t play his favorite game of all, which is a classic run and fetch game (he’d love NOTHING more than to catch the frisbee in the air but those days are long over), so we’ve evolved into either 1) he runs around in silly circles with the frisbee in his mouth while I clap and encourage him, 2) I put him on a stay and throw it and then release him to go get it once it’s landed (but this only if there is a lot of snow on the ground, and only 3 to 4 times at most) or 3) he goes on a stay and then I hide his toy somewhere in the front yard. We always play some hide and seek games, because it gets him running around without stressing his shoulder.

Later in the day we play lots of object-related games in the house. Our favorite are tug games. It’s great exercise for him (and me) and we combine it with lots of exercises in self control like “get back” and “drop.” Then we’ll usually do a round of tricks, also in the evening. Usually earlier we’ll have been on a walk up the hill, and in better weather it might include working him on sheep, but that’s just not possible right now.

As I write this I realize that Willie loves two kinds of play: Object play with me (which he also plays by himself, tossing objects into the air and running around the house) and playing chase games with other dogs. Willie doesn’t like rough and tumble play or any kind of play with lots of contact with other dogs: he wants to run and run and run and run, and sometimes I think nothing in the world makes him happier. I wish I could run as fast as he. If I could, we’d dash around the pasture together like foals in springtime. Alas, I’m built like a sturdy hiker and not a runner, so that’s just never gonna’ happen.

I’m not the only one interested in how you play with your dog. There’s an interesting study ongoing at the The Horowitz Dog Cognition Lab at Columbia University (Barnard College) about how people play with their dogs, and they (and I!) would love it if you would participate. The study, run by Alexandra Horowitz (author of The Inside of a Dog) and Julie Hecht (author of the fantastic blog, dogspies, will investigate interspecific play between people and dogs by collecting videos of people playing with their dogs for future analysis. You can learn more about it by going to a brief description of the study and what you have to do to participate.

I’m going to send in a video of me and Willie playing tug, because we both seem to enjoy it so much. It’s hard to choose though, because we do have so many different ways of playing. By the way, I’m focusing on Willie because Tootsie simply never plays with anything. At all. I don’t worry about it for a moment. She wants food and cuddles (in that order), and loves sniffing around outside now that she’s discovered she’s a spaniel (and eating cat poop now that she’s discovered she’s a dog). It would be lovely if she and Willie would play, but then, it would be lovely if I had arms like Angelina Jolie, and both of those have about equal chances of happening and both Tootsie and I are pretty happy anyway.

Here’s the video I’m sending to the Horowitz lab:

MEANWHILE, back on the farm: Snow snow snow snow. Did I mention it’s snowing? It’s snowed here almost every other day, although yesterday it began as rain. That’s the worst possible weather scenario you can get this time of year: first it gets everything wet and super slippery, then it freezes into ice and then snows on top of it. It makes everything extra dangerous (the hospital emergency rooms were full to the brim from falls), and creates a hard coating of ice between layers of snow. But I’m still happy we are getting the moisture and that we have a real winter this year. I will admit I’m getting a little cabin fever-y, but I’m so glad that the earth is getting back some of the moisture that we missed last year. We were 12 inches down and in “severe drought” through fall, so I hope that all this snow will soak into the ground come mud season. But right now it’s all about the snow. We didn’t get the huge storm that is probably hitting the East coast right now, just got 3-4 inches yesterday, but it’s still basically a white and blue/grey world out there. I love the way the snow tops off the fence posts, like whipped cream on a sundae: 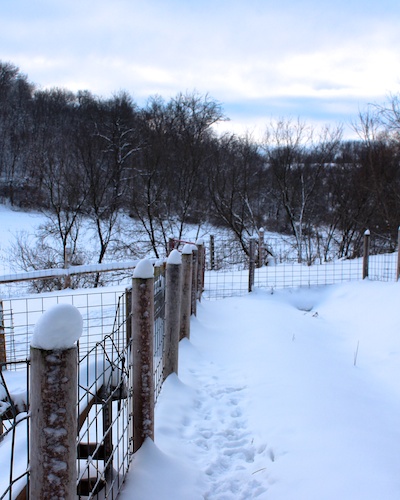