Welcome to an ongoing inquiry about the behavior of people and dogs.
Blog Home >> Animals >> How Long Does it Take to Learn a New Habit?

We’ve been told (and I’ve repeated in my books ) that it takes about 21 to 28 days to learn a new habit. That doesn’t sound like too long a time, but the research also found that people tend to drop out a new behavior after about 2 weeks if they don’t go out of their way to keep going. But a new study from psychologist Phillippa Lally of University College London found it took an average of 9.5 weeks to get students to incorporate a new habit into their daily lives. Two and a half months — oh my, that’s a serious chunk of time. Good for us to remember when we are working with our dogs. There’s little question in my mind that one of the most common mistakes we make with our dogs is to get a good behavior started, and then stop reinforcing it too soon.

Of course, we have to be careful to about making assumptions from human research to canine behavior. Indeed, we have to be careful about generalizing the results of one study on college students (96 of them, asking them to form a new healthy habit like drinking a glass of water before eating lunch) to the rest of human behavior at all. This happens far too often: many psych studies are done on college students, who are at a unique age and stage in life. How much of their behavior is similar to that of someone in their 60’s?  And what about the habit one is trying to form? Surely that makes a difference.  (Question: I wonder how it was determined that a habit was “formed?” I haven’t seen the original study yet, will look it up.)

Prediction: Teach Trish to form a new habit of eating dark chocolate after every meal because it is good for her. Time required for habit to form? One day. Good Trisha. Food for thought (sorry.)

By the way, speaking of learning new things, Willie is making huge progress learning to associate the word “Scorch” with his scorpion toy. His responses are not 100%, but they are becoming impressively consistent. I’ll write my next post at the end of the week about the method we are using (and explain the “model-rival” method of training word associations.)

MEANWHILE, back on the farm: Willie and I just got back from the barn. I’m still laughing. Sort of. Things got a tad, uh, interesting in the flock. It started when I put a new dog  jacket on little white boy. It’s supposed to go below zero and get windy later on this week, and although well-fed lambs are hardy critters, that’s getting bit nippy for the little guy. In spite of gobbling up his extra grain and feeding off of mom, he still seems a bit thin compared to the other two (who, granted, look like well-fed ticks). So when Katie asked if I wanted to try Lily’s (Willie’s Dogo friend) puppy jacket, it seemed like it was worth a try. After all, he’d worn a smaller one earlier, and had done well with it. Now it was too small, so the larger one seemed like it might be a good idea.

I had two concerns. One was that it wouldn’t fit. I wasn’t so much worried that it would fall off, or not keep in any warmth, but more that somehow it would slip and end up strangling him in some tragic farm accident. Such things happen. I had a ram who got his head stuck in a bucket; he wasn’t injured, but he could have been. (Okay, truth in lending here: coming home to find Beavis the obnoxious ram trotting around the barn pen with a black bucket over his head was a highlight of the week.) I had a young lamb manage to hook his lip on the dull end of a plastic bungee hook. I found him snagged like a trout to the pen wall. I still can’t figure that one out. I’ve had sheep with their  heads stuck in an old fence (since replaced). None appeared to be injured, but I doubt they enjoyed it and each time it led to a Lucille Ball-worthy ten minutes of me trying to pull them out. But it can be serious: I have also had a ewe die when she strangled herself on an electric fence that shorted out. So I had reason to be concerned.

Since the larger coat had been worn by a dog last year, I was also concerned that the lamb would be rejected by his mom because he didn’t smell right anymore. So I put on the coat while his mom and sister ate grain, and carefully watched how the two moms responded.  They both sniffed white boy, sniffed his new coat, seemed unperturbed, and went back to eating more grain. Great. Smell not a problem. Next question, would it stay on? I let them all out into the main flock and fed them all hay, hanging around to see if the coat stayed on while he fed. At first all the sheep put their heads down and began to chomp on the flakes of hay scattered on the fresh snow.  But suddenly the entire flock took off as if shot, and began running panicked circles around the pen. They ran around like crazed circus animals, around and around they go!, except they looked terrified and no one was clapping. I have never, ever seen my sheep run so fast. Before Willie and I could stop them,  they bolted out of the gate and streamed up the hill into the woods. By this time it was clear they were afraid of little white boy (or the smell of his coat). Even Truffles caught the fever, and the faster she ran away from her lamb, the faster he ran to keep up, bawling his head off. Now they’re running into the woods, little white boy scrambling to keep up with his terrified mother, who is running faster than I have ever EVER seen a sheep run.

Super. Now what? They could run themselves into a broken leg in a minute up there, it’s steep and slippery and the logs and downed wood are buried in the snow. The lamb could exhaust himself . . . etc etc. Should I send Willie? Tricky: ewes with new lambs are understandably aggressive to dogs and I’ve kept Willie off them since the lambs have been born; this did not seem like an ideal time to get that sorted out. But there was no way I could get in front of the flock, and I had split seconds to make a decision, so I called to Willie and he and I dashed toward the woods, and luckily, oh so luckily, a ewe without a lamb saw him and turned the flock and ran back into the barn pen, followed, amazingly by Truffles and her panicked lamb. He continued to run after his mom, who continued to run in terrified circles with the rest of the flock until I could manage to run in with a bucket of grain, lure little white boy into the inside of the barn and pull off the offending coat.

If the flock had a Facebook page, it would say:

ATTACKED BY HUGE DOG TONIGHT, BARELY ESCAPED WITH OUR LIVES.

Here’s sunrise a few days ago, before the latest 5-6 inches of snow fell. It’s good we got the snow, temperatures as low as are expected can be devastating to plants, who need the snow to insulate them from the bitter cold: 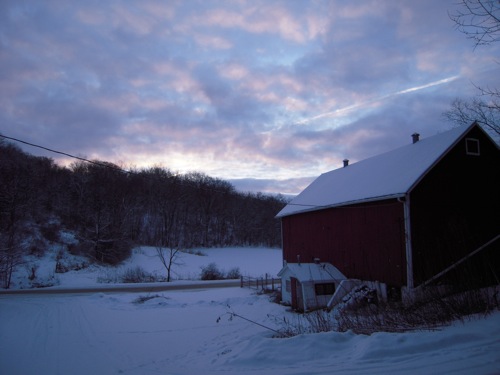