Welcome to an ongoing inquiry about the behavior of people and dogs.
Blog Home >> Animals >> Hugging

There’s been a lot of hugging lately, from dear friends expressing love and sympathy after Lassie’s death. And oh, a good hug feels so good, doesn’t it? Thinking of it reminds me of how very differently dogs and people express affection and care, and how hugging is so hard-wired in humans, but not natural to dogs. This photo, that I can’t attribute to any source but has been all over the internet, is a perfect example of the primate propensity to hug (and a dog’s typical reaction).

I must have 50 images of people hugging dogs in which the person is beaming with happiness and the dog is looking uncomfortable. Of course, there are plenty of exceptions, but they are more rare than I suspect most people realize. (After all, we can’t see a dog’s face when we hug him, now can we?) I do know lots of dogs, Willie included, that love lots of body contact with people they know and trust, but not with strangers. Which is not that different from us after all — how would you feel if some guy you’d never met threw his arms around you on the street?

But what IS different is that dogs don’t make “ventral/ventral” contact (chest to chest, belly to belly) like primates do when they are nursing, and thus don’t develop a positive association between ventral/ventral contact and feeling nurtured and loved. But we could help that. What if every puppy class included instructions on how to condition your pup to accept or even enjoy hugging, because people ARE going to do it. (Sigh: I JUST finished the new version of Puppy Primer and didn’t think to include that. Ah well, next time.)

I’m curious: How many dogs out there would rather not be hugged? What’s your experience? (And have you gone out of your way to look at your dog’s face when s/he is being hugged?)

Meanwhile, back at the farm: What can I say? We’re still in that raw place in which you feel like you’ve had surgery without an anesthetic. There’s lots I’d like to write about grieving after a dog’s death, but not now, not yet. But I can say thank you from Jim and me for the outpouring of support. Oh my, it means so much. And I have read and cherished every one of the Six Words you have written. Gorgeous.

Willie had a hard time. When Lassie died (unexpectedly, shockingly) I cried so hard that I scared him. It took him 24 hours to stop tongue flicking. Now he is so clingy he hid behind my legs throughout a dog romp Sunday afternoon. However, he also ran like a greyhound with a young BC who he loves just a few minute before, so he’s doing well some of the time. I suspect on the dog romp that it was the pack of dogs, and all the activity, that made him nervous. He’s never been in a group of dogs before without Lassie. The two of them never interacted in any visible way when on dog romps, and so I was surprised that he seemed so different. In hind sight, it makes sense, but then, hind sight is always 20/20. However, he did come out of his shell around the other dogs once I got out a stick, and he now, finally, will again eat food out of his Kong in the morning. Day by day.

Here’s a photo I took this morning of the remaining hay in the hay mow, sunlight streaming through from the east. I love old barns, and am so lucky to have one. This one collapsed right after I bought the farm in 1982, but we brought it back to life (several times actually.) 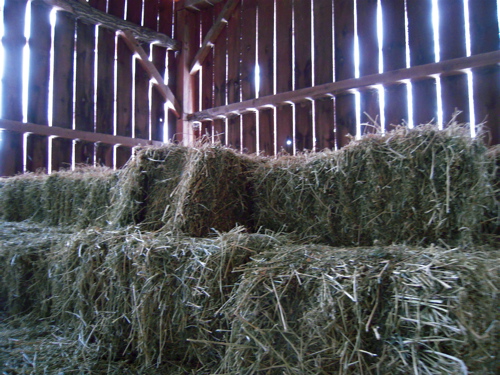