Welcome to an ongoing inquiry about the behavior of people and dogs.
Blog Home >> Animals >> Human-Animal Relationships; People and Dogs

I started teaching my University of Wisconsin course yesterday, titled “The Biology and Philosophy of Human/Animal Relationships.” It is, granted, a lot of work, but I love doing it. I love the intellectual stimulation it creates, and I love working with 150 smart, motivated young people with minds like steel traps (okay, most of them) who are hungry to learn how to relate their education with the day-to-day issues of life.  We’ll be talking tomorrow about “humans and animals.” Or, is it “humans, and other animals?” What really makes us different from the rest of the animal world, and what makes us the same?

I love thinking about those questions, and I love how dogs are always reminding me that while we humans are special… different in so many ways than all the other animals on earth, we are also so very much the same. It makes me feel connected to the rest of nature. I like thinking of myself as an animal, but historically many people have been uncomfortable with that linkage. One of my favorite quotes is from the wife of the Bishop of Worcester, who, upon reading The Descent of Man by Charles Darwin said something like; “Oh dear, I do hope it isn’t true (that we are related to apes). But if it is true, I hope it doesn’t become generally known.” Too funny, too British (I can say that, me mum was British).

What about you? Are you put off by someone saying “humans and other animals?” Do you like thinking of your connection to your dog, as another mammal, or do you feel like that demeans you as a person?

No new photos from the farm today, but forgive me some nostalgia. Here’s a photo of me and my late Great Pyrenees, Tulip. She died last February, but for some reason I’ve been missing her terribly these last few days. Maybe it’s the lambs, and knowing that she’s not there to protect them anymore … 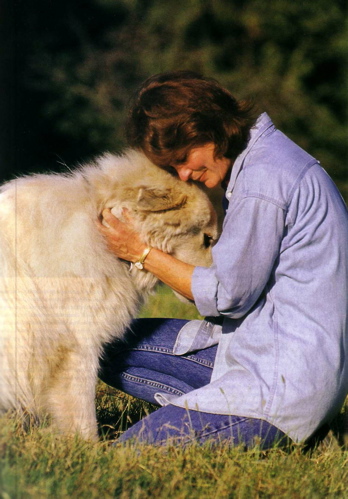